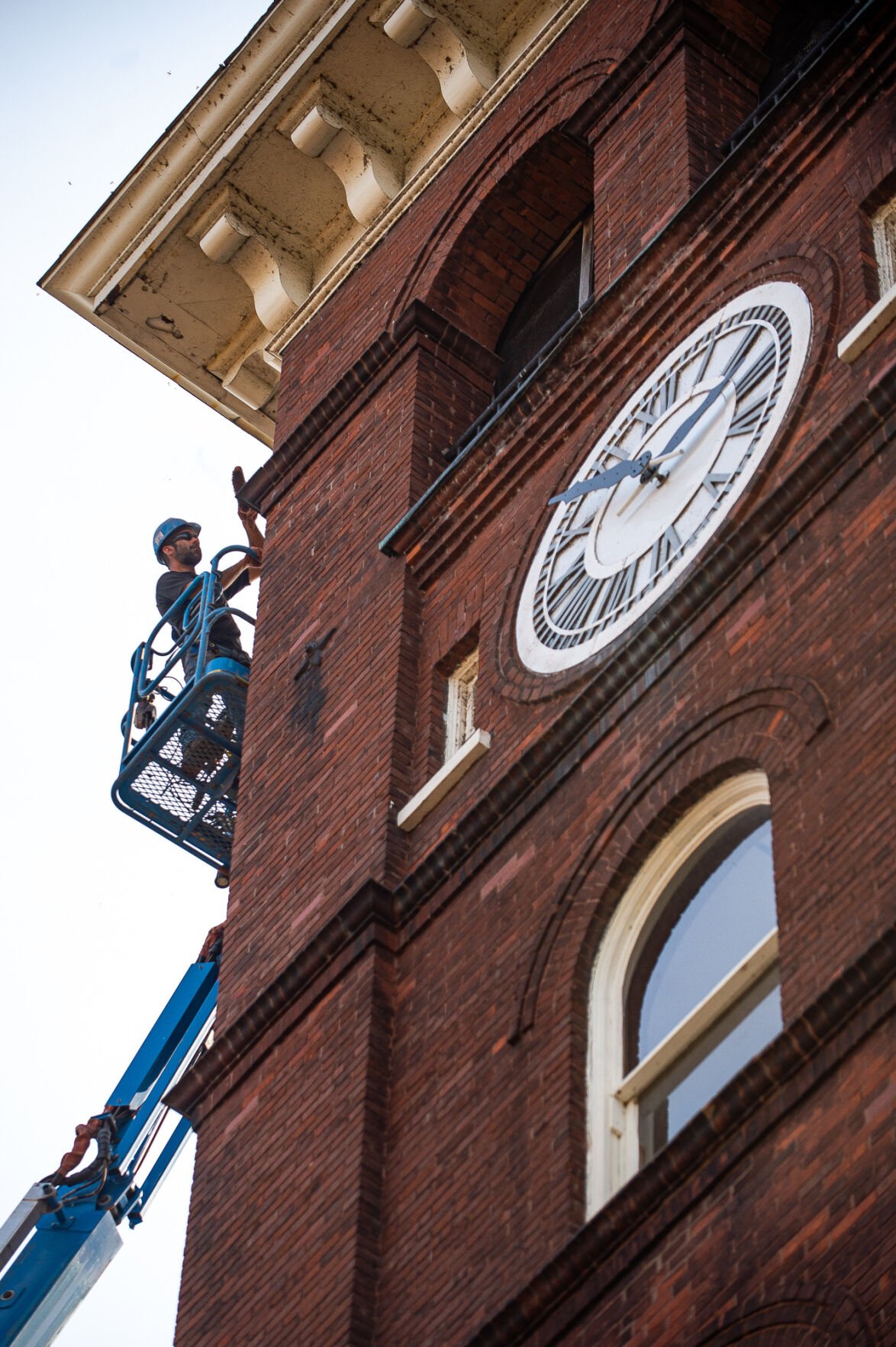 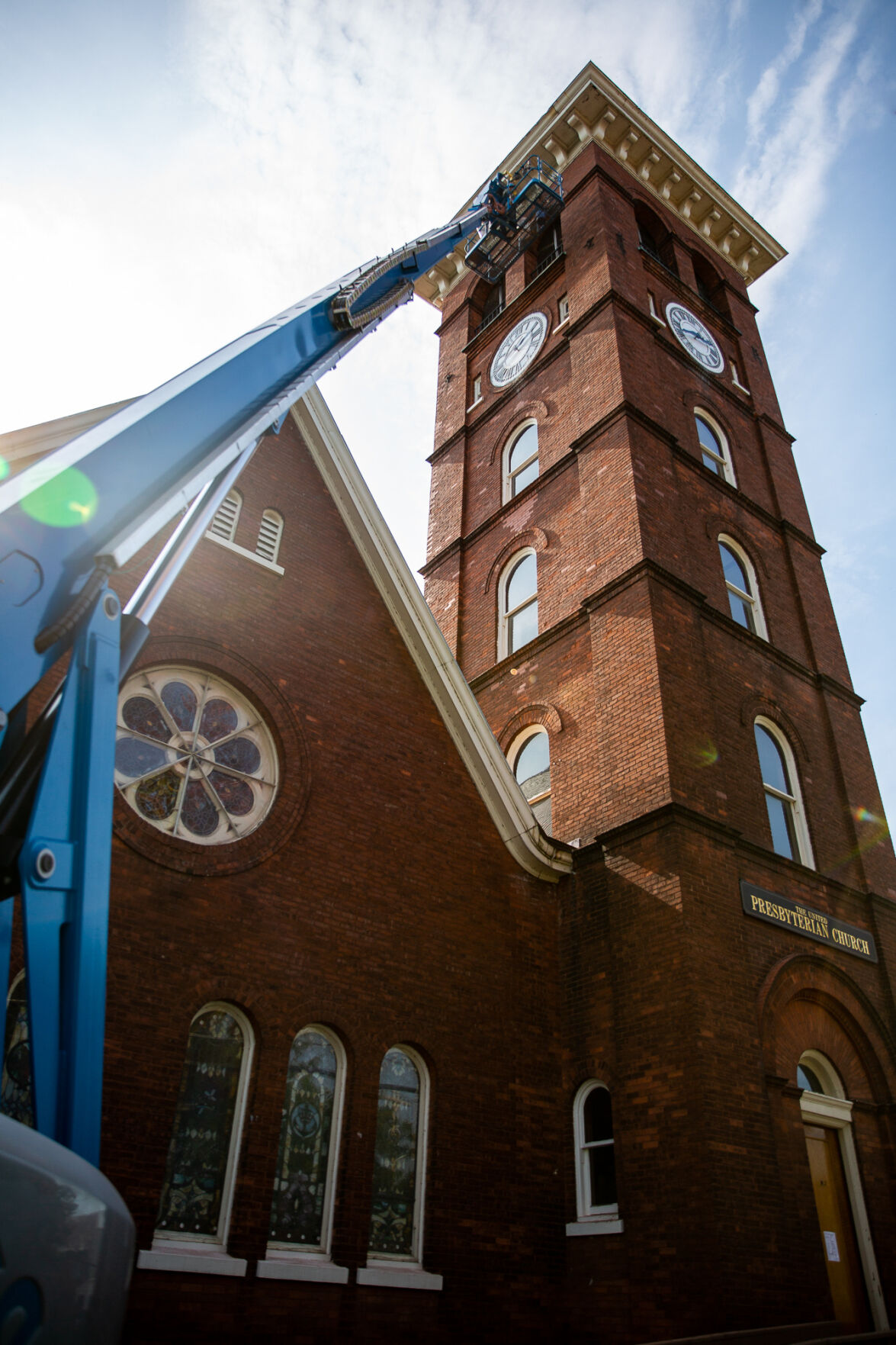 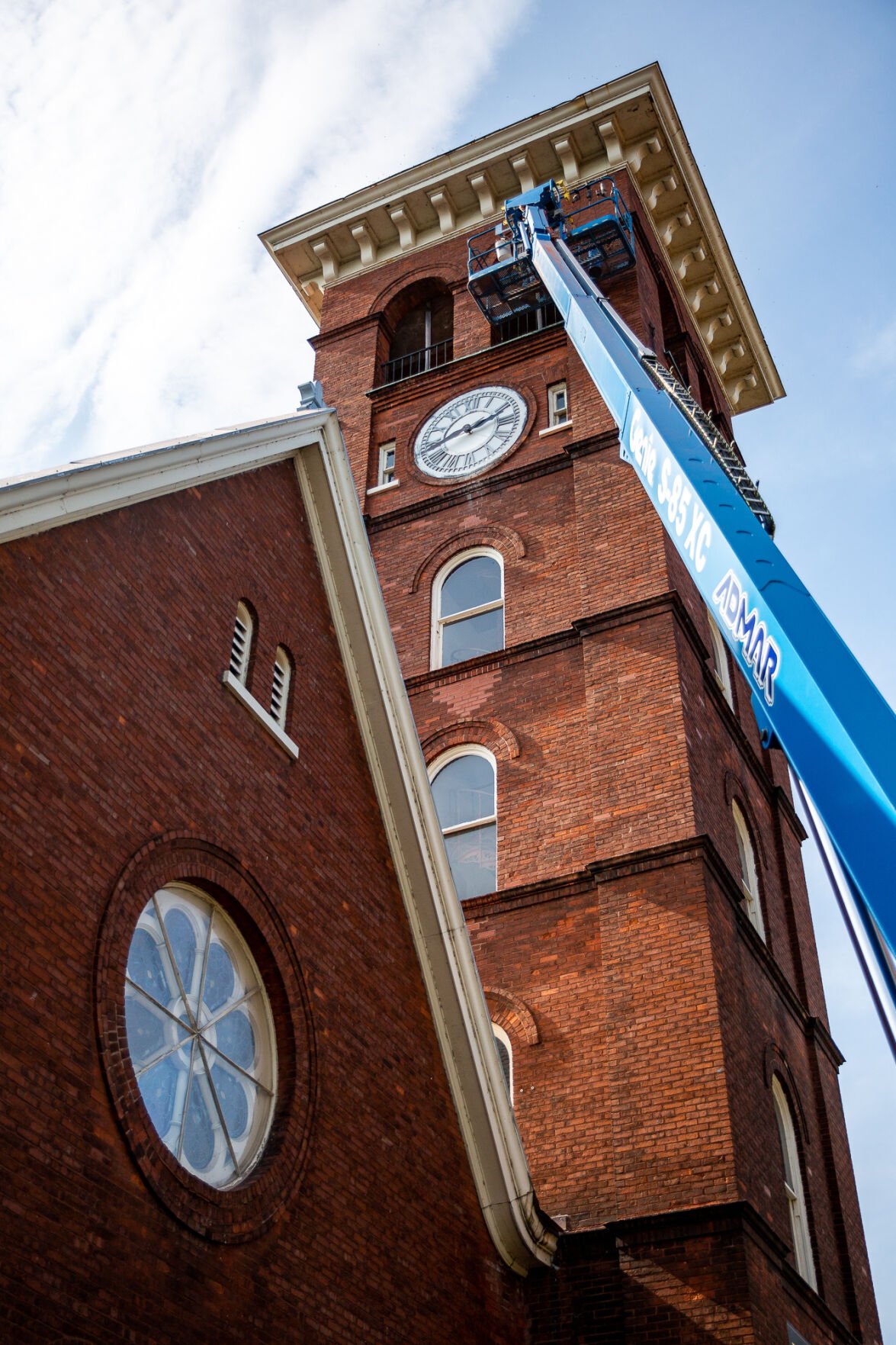 SACKETS HARBOR — High above the village, work is underway to restore the historic bell tower of the United Presbyterian Church to its former glory, repairing damage wrought by 120 years of harsh north country weather.

At the corner of Main and Broad streets, historical restoration masons employed by Lupini Construction, Utica, have been hard at work outside the square brick tower. Work began on the project in July and will most likely finish up for the season before the month is out.

Bernard “Bernie” H. Brown, a resident of the area and member of the church, is a retired licensed architect, and helped connect the church with Lupini Construction, knowing they had a great reputation for the kind of work that needed to be done on the tower.

“If you look up above the bells of the tower, you’ll see a nice decorative line of brick before you get to the arcs,” Mr. Brown said. “All that brick above there has been restored with this project; you can see the significant difference in that facade.”

According to Mr. Brown, the church’s buttresses were repaired once before, but the materials used to repair them are not compatible with the historical brick and mortar, instead fighting the old brick and mortar and causing more expansion and contraction, leading the brick and mortar to just disintegrate.

Before work began on the project, Lupini Construction performed an on-site investigation resulting in a detailed report. Deep probes were inserted into the brick, sampling the walls of the old tower for material integrity. The composition of the old bricks and mortar were analyzed by a laboratory and compatible new materials purchased to be used when necessary if original brick could not be salvaged.

If the bricks were salvageable, mason Mark S. Lyndaker of Lowville cleaned and reused them; if not, color- and composition-matched new bricks were installed. The bricks that couldn’t be saved were matched by a brick company called Bock Brick Inc., East Syracuse.

“They’re a great resource to find bricks that can work with the old bricks,” Mr. Brown said. “The whole key is that they’re doing the whole building with the new brick, and they’re doing it with new mortars that are compatible with each other.”

The west-facing side of the tower takes a beating from the majority of the bad weather in the area, according to Mr. Brown. The crumbling bricks visible to passersby are a direct result of this. In time, with the amount of money necessary for full repairs remaining a challenge, the whole facade will resemble the work that’s been done by Lupini so far.

According to Mr. Brown, if all repairs were to be done at one time, a price tag of about $600,000 would be attached. This summer, the church authorized $150,000 to get the project going because some spots couldn’t wait much longer for restoration. The small congregation has been planning and saving for the project, securing project estimates and bidding proposals. A grant request was submitted to the Landmarks Conservancy, Sacred Sites Foundation, which brought in $30,000. A further $120,000 came from previously accumulated church funds.

A capital campaign is in the works for the project and is expected to be underway sometime toward the end of the year, with half a dozen people volunteering to be on the committee. Mr. Brown said it would be nice to have $150,000 more for next season, which doesn’t start until about June. The church’s plan was to go to the Presbytery Fund, which loans money to Presbyterian churches to do capital projects, but before the church can apply to borrow from the fund to supplement the money that’s needed for the project, it first has to prove it has a capital campaign in the works.

This year’s restoration efforts have not been without surprises, one being that the floor of the bell tower is the roof of the clock room. The materials on the floor of the bell tower deteriorated to a point where they were allowing water and debris to get down into the clock. In the clock room is where all the controls for the bells are, so the inner roof had to be replaced. At the same time, Lupini Construction determined that with the age of the materials, an asbestos test was in order. Upon testing, it was found to be far above the acceptable levels the state would allow.

According to Mr. Brown, Lupini has also contracted with a roofing company out of Gouverneur called RSI to do some flashing to keep moisture off the top of the buttresses, which will help them remain intact and prevent deterioration.

This current restoration effort is not the first at this site. A new slate roof was installed in 2006 at a cost of about $220,000 and covers the whole building, including the tower.

“It’s part of the legacy of Sackets Harbor, where preservation is a moving force and has been since the 70s,” said church member and village resident Mary J. Deans. “This is a landmark building. You notice the slate roof; I don’t think there’s another slate roof in town ... this church was very mindful of its legacy and determined to put a real slate roof on.”

A project long overdue, it was noted back when the new slate roof was installed that the bricks were crumbling, and the winters since have not been kind to the church’s exterior.

The bells in the tower are listed as being cast by the Meneely Company, West Troy, in 1898. The largest bell weighs 1,500 pounds, the smallest 185. The large bell chimes on the hour.

“The tower is really a village landmark as much as a church landmark, and the clock belongs to the village; it still pays the electricity to run it,” said Patti C. Stevens, church member and village resident.

The restoration project for the church will span years since the mortaring requires warm and steady temperatures and money allocated for the first phase of the work has nearly been spent. The rubber sheathed buttresses and crumbling bricks must weather another winter and await warmer days.

To continue the restoration another year, the church’s current goal is to secure another roughly $100,000. While this undertaking has and will most likely continue to prove to be a challenge, those who value the church for its history and the memories it holds are willing to do what it takes to preserve its beloved bell tower.

“We’ve had a good history of trying to care for this building,” Mrs. Stevens said. “We do our best and we have for years and years done our very best to take good care of this building.”