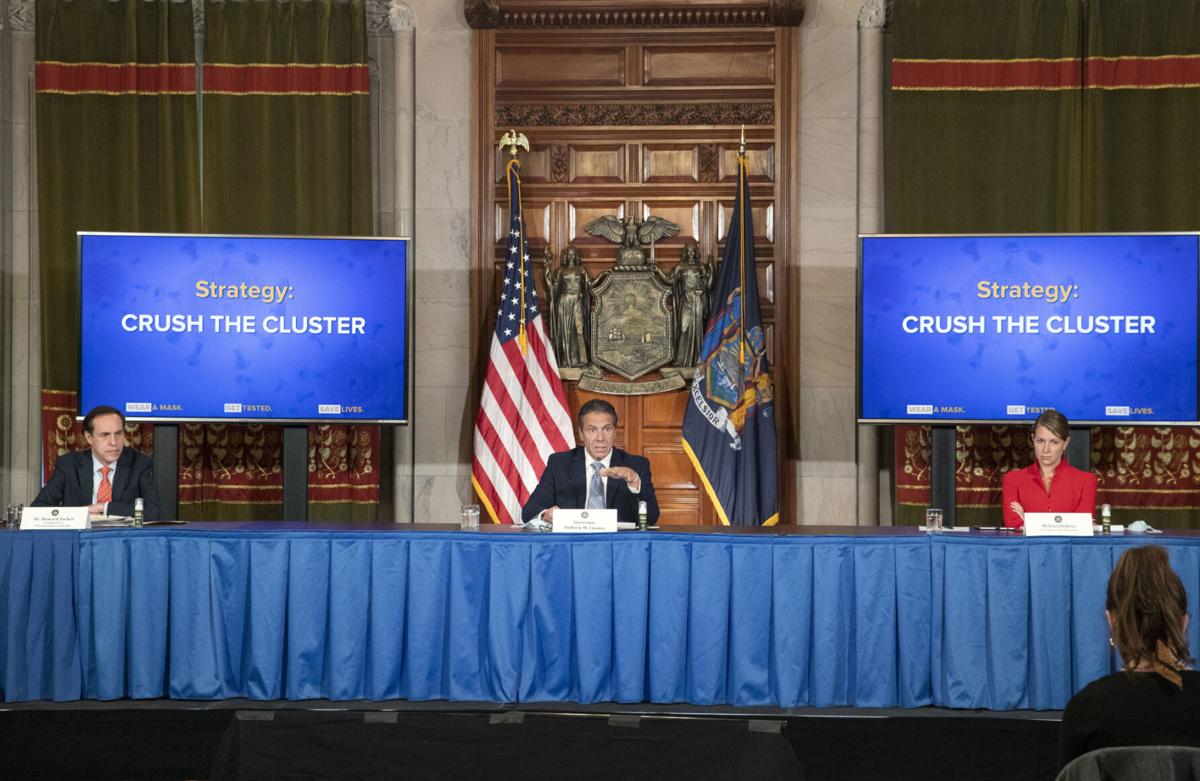 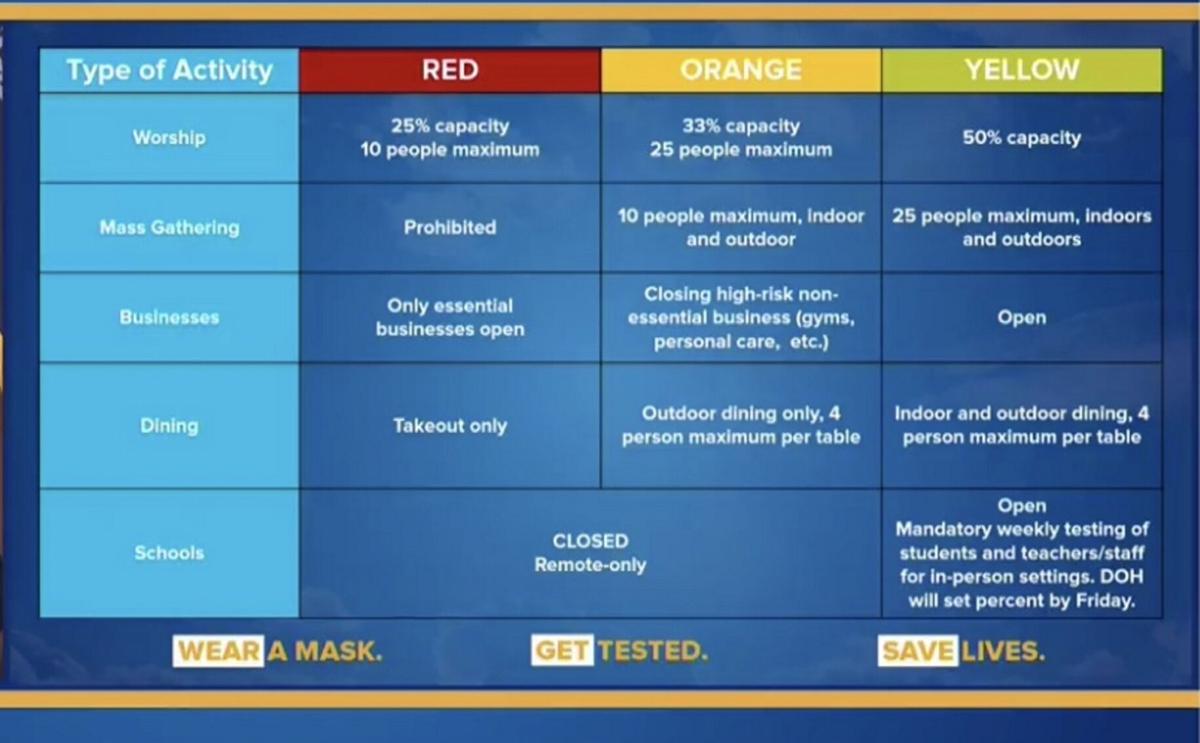 The state reported 1,836 New Yorkers with new COVID-19 infections Thursday, or 1.26% positive of 145,811 tests conducted the day before. The top 20 hotspot ZIP codes, mainly concentrated in Rockland and Orange counties in the Mid-Hudson region, and neighborhoods in Brooklyn and Queens, have primarily originated from large religious gatherings in the Orthodox and Hasidic Jewish communities.

Hundreds of virus infections have also appeared in the city of Binghamton and several surrounding towns in Broome County, Western New York and various colleges and university campuses across upstate.

It is critical people do not confuse the increasing coronavirus infection rate to mean New York’s COVID-19 rate is on the rise overall, Cuomo said Thursday, as thousands of rapid and diagnostic tests were targeted to the state hotspots over the last two weeks, inflating statewide numbers.

“Some have reported that the state’s infection rate is going up — that is not a fact,” Cuomo said during a conference call with reporters. “That is incorrect. The clusters are what we are watching. ... The statewide infection rate is actually lower than it has been.”

New York hotspots had 5.8% positive coronavirus infections Thursday, and represent roughly 6% of the state’s population of about 19.5 million people. The state had a 1.01% positivity rate excluding hotspot ZIP codes Thursday, down from 1.05% on Wednesday.

“I don’t think there’s any other state that does enough testing to even know what 6% of the population is doing,” the governor added. “The 1.01% is down from the past several weeks, so don’t confuse 6% of the population and say it’s representative of the state, because it wouldn’t be a fact. You can say whatever you want to say, but it’s just not a fact.”

COVID-19 infections throughout the rest of New York’s 10 regions remains low, with a 0.5% positive rate in the Capital Region and Mohawk Valley on Thursday, 0.7% positive in the north country and 1% positive in Central New York and on Long Island. Officials reported 1.4% positive in Western New York.

The Mid-Hudson region, which includes Rockland and Orange counties, was up to 2.2%. New York City had 1.2% new infections, but its overall positives are skewed lower because of the larger population.

“The 6% of the population in these clusters, we know exactly where they are,” Cuomo said. Hotspots appeared after Orthodox religious leaders did not enforce the governor’s coronavirus mandates that have been in effect since March and April, requiring New Yorkers to remain six feet from others and wear face masks in public.

Dozens of protesters set fire to heaps of masks piled on 13th Avenue in Brooklyn on Tuesday and Wednesday nights.

Jacob Kornbluh, a prominent political reporter for Jewish Insider and a member of the ultra-Orthodox community, was assaulted Wednesday night while covering city demonstrations. Cuomo spoke to Kornbluh on the phone Thursday morning.

“There is no excuse for violence — especially against a reporter,” the governor said. “This is a person who was doing his job. There is no excuse. It was disgusting behavior, frankly, and it’s unintelligent because we’re talking about saving lives of their community.”

Cuomo spoke with Orthodox leaders statewide multiple times last week and this week who admitted they did not follow the state’s COVID-19 guidelines, including closing areas of worship, limiting the number of parishioners or requiring them to wear face masks.

All houses of worship, including churches, synagogues, mosques and others, were closed to the public at the height of the pandemic in the state this spring.

“Because the previous rules were never enforced” in these communities, Cuomo said of ultra-Orthodox Jewish sects and neighborhoods, where people have continued to gather in crowds for religious gatherings or celebrations and not wear facial coverings.

“This is, again, the outrage, because the laws were never enforced, and now you want to enforce laws that weren’t enforced six months ago when they were first put in place,” he said.

The governor compared the stalemate with the religious community to immunization pushback during the 2018-19 measles outbreak that plagued New York City and outside metro areas in New Jersey.

“We had a laboratory called the laboratory of New York state,” Cuomo said. “We proved these facts. This is irrational, illogical, ugly, illegal conduct and it shouldn’t be tolerated and it’s an affront to the Jewish community, the Orthdox community, the ultra-Orthodox community. It’s against everyone’s best interests.”

The hotspots and surging cases would not have happened if local governments and clergy initially enforced the coronavirus mandates, the governor said.

Ten New Yorkers died from the virus Wednesday, up from eight on Tuesday.