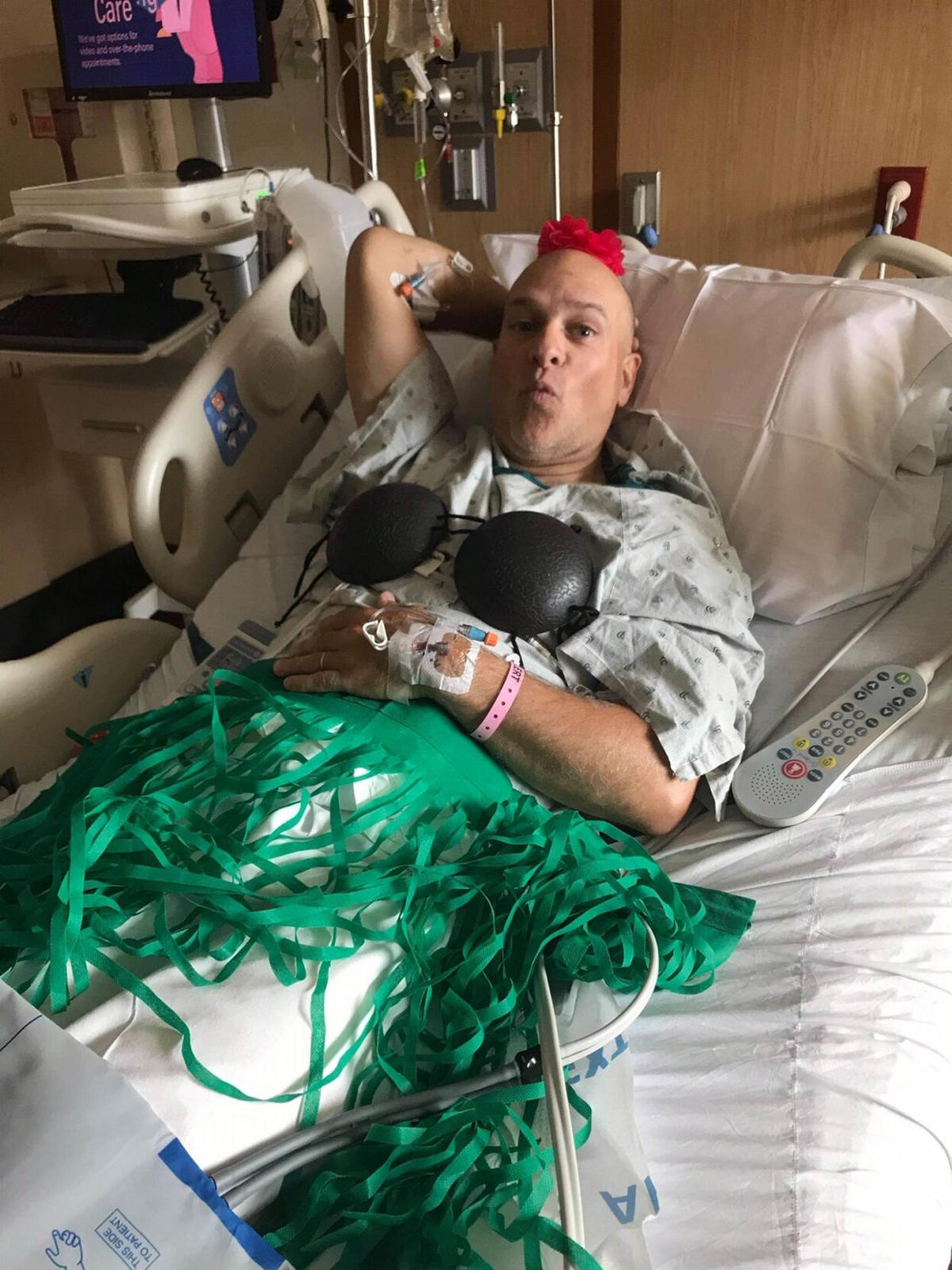 Scott was scheduled for open heart surgery the following Thursday. He was already more himself and showing his known sense of humor when he donned a grass skirt and a coconut bra for pictures while confined to the hospital and unable to see his kids. 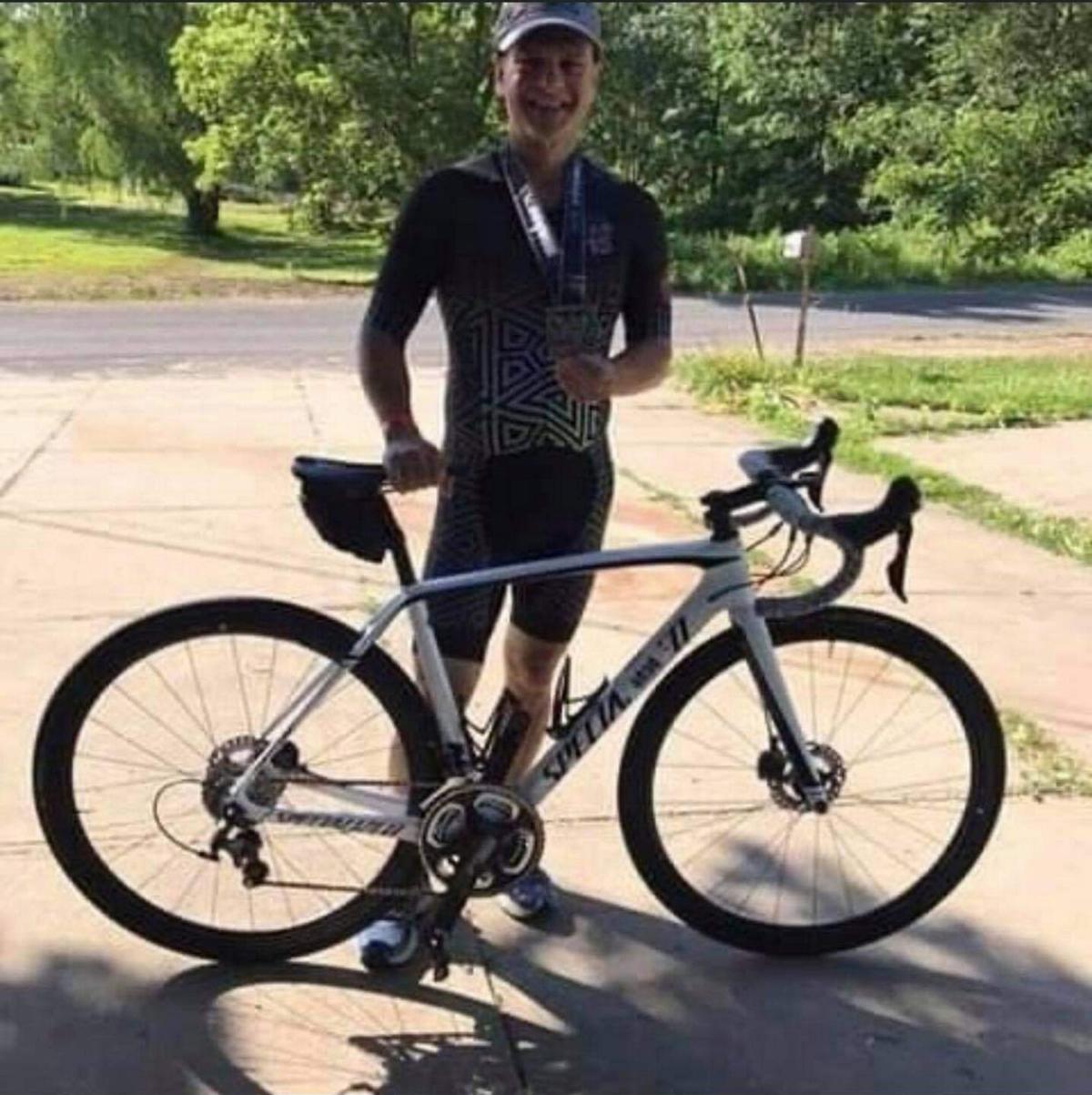 Scott Patnode of Phoenix, an avid cyclist, was struck by a heart attack at home on Sunday, July 5. His wife’s knowledge of CPR kept him going until EMT’s arrived. 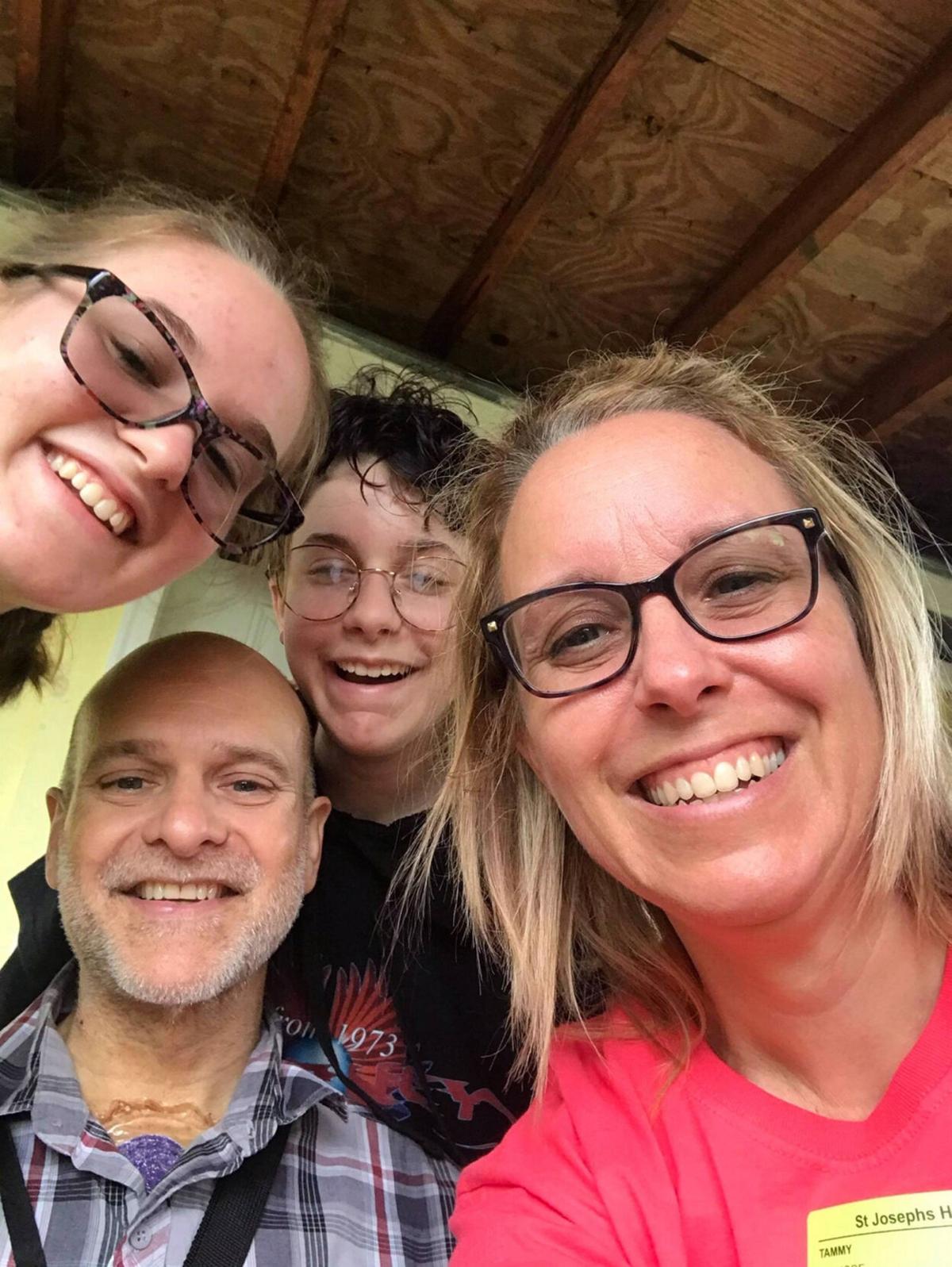 Tammy Patnode and her kids Skyler and Tateum welcomed Scott home, capturing “the moment we got to be together again”.

Scott was scheduled for open heart surgery the following Thursday. He was already more himself and showing his known sense of humor when he donned a grass skirt and a coconut bra for pictures while confined to the hospital and unable to see his kids.

Scott Patnode of Phoenix, an avid cyclist, was struck by a heart attack at home on Sunday, July 5. His wife’s knowledge of CPR kept him going until EMT’s arrived.

Tammy Patnode and her kids Skyler and Tateum welcomed Scott home, capturing “the moment we got to be together again”.

PHOENIX — It was just another July 4th weekend for the Patnode family as it unfolded in Phoenix. Home much of the time with daughter, Skyler (recent graduate) and Tateum (new sophomore), Scott and Tammy Patnode were moving through the COVID crisis with both independent and closely connected time together.

Scott was an avid cyclist and rode his bike about six miles, as he did almost every day for years. It was a normal ride that day. But that Saturday night, something was suddenly off. His wife Tammy says she woke up to the sound of her husband gasping for breath. Scott was attending, gasping, but indicating he just needed time to catch his breath. When it subsided, their belief was that it was an asthma attack. Scott had one at the age of 17 and remembered what it felt like.

Sunday morning he took another bike ride … “a nice easy ride,” Tammy says. Still she went to check on him riding at the Industrial Park. He said his legs were tired but not much else seemed amiss. They stopped at a Walgreen’s and bought an inhaler – in response to the night before - on their way to his mother’s house for dinner.

Sunday night - 3 a.m. – Tammy awoke again. Her husband’s breathing was “not right”,” she says. She wasn’t getting a response like the night before, so she sat him up. “I realized his eyes were open but that he wasn’t focusing,” she adds. Next step. 911.

As it happens, Tammy had also recently taken a certification class for CPR. She knew she needed to get Scott on the floor but struggled a bit. Just a few weeks before, her uncle had a heart attack and when taken to the floor had hit his head on the nightstand, complicating that scenario. So even knowing what might happen to him physically with CPR, she was careful to get him down on the ground without incident.

And as she spoke with the dispatcher, Tammy Patnode’s training kicked in. She knew the process from working with the CPR dummies in class – compressions 1,2,3,4 – “I didn’t think twice,” she says, “The dispatcher did a great job helping me to keep going. I kept saying to Scott, “Stay with me now”, and just kept going”.

Of course, the 20 minutes before EMT’s arrived seemed like forever. The dispatcher wanted her to stop and go unlock the door, but by then Tammy had yelled to her daughters and Skyler went to let them in. “I was never so thankful to hear those sirens,” Patnode says. “Scott’s gasping had stopped. It was pretty scary.”

When the first EMT came in, “It was so great to see him”, she says. She also knew it “was time to step back and let the EMT’s take over … to trust in them.”

Under COVID conditions, the ambulance took Scott to the emergency room… where Tammy and her family had to leave him and get updates remotely.

Later she learned that the responders from Moyers Corners, who came out to the Patnode home, thought Scott had passed away. Fire departments can have a pastor associated within their organization and one visited Tammy the next day under this assumption, only to hear Scott had survived.

Scott Patnode, however, was not out of the woods. He had a stroke within 24 hours, resolved with immediate care and, within a few days, open heart surgery; a quintuple bypass. He remained in the hospital for a week.

“It was all pretty shocking,” Tammy Patnode says. “He eats healthy, works out and takes care of himself.” She says that Scott seemed more himself mid-week, cracking people up with his sense of humor. Tammy was allowed in to see him before his surgery on Thursday but the kids were not allowed in at the hospital. Wanting to get some positive vibes going, Scott had Tammy bring in some props for pictures, posing for ‘the fans’ in a grass skirt and a coconut bra.

Surgery went well. Friday, his wife says, he looked much better, although in pain from the surgery. By Saturday and Sunday, nurses and therapists had him up and walking and then it was home… the family together again. Since then, she adds, “It’s hard to keep him down”.

It also helps that the Phoenix community has rallied around them in this unexpected crisis. Neighbors started a Go Fund Me page to help with the additional medical costs. Tammy Patnode is also particularly thankful for the meal train started by their friends, which provided meals for several weeks. “We felt so supported,” Patnode says, “It’s an amazing community … they went above and beyond for our family.”

“Mostly I can’t believe he’s here, and I’m so grateful for that,” says Patnode of her husband. She knows in her heart that Scott survived because of her ability to perform CPR. She personally had taken the course multiple times but says, “When you’re in the situation you don’t know what you’ll feel”. While it was certainly scary to confront the need for her own husband, she also says, “I knew not to panic. I wasn’t scared of doing the CPR itself”.

Patnode encourages everyone to take a CPR course, especially since the opportunity is easily accessible in the local area. She directs people to CNYCPR.com for information about classes in Baldwinsville, convinced that any cost “is so worth it”. The organization has begun scheduling classes again with appropriate health and safety requirements in place.

People can also find information about First Aid/CPR classes at www.redcross.org or by calling 315-234-2200. The Red Cross out of Syracuse has limitations to their class sizes but is scheduling those classes currently. In most classes, Pre-COVID, the maximum number in class was 12, with students being partnered with other students. Now, most are for no more than six to a class, no partnering, individuals spread out six feet apart, no sharing of supplies or equipment, with areas and items cleaned per CDC sanitary guidelines. They do take temperature checks on arrival to class and will not admit anyone with a temperature over 99.5 degrees – class cost refunded. They can also schedule classes for businesses and individuals who might have more people interested.

The statistics shed light on the feelings and realities confronted in circumstances like Scott Patnode’s experience and those confronted by others in an emergency. The CNYCPR website notes that 70% of people feel helpless during an emergency. About 32% of victims receive CPR from a bystander. Only eight percent of cardiac victims, outside a hospital when facing crisis, actually survive, but that bystander CPR can increase survivability by 300%.

A woman answering phones at the Red Cross, who had taken the CPR course herself, points out that “it’s like insurance. People often ask, do I really need it? It’s there when you do need it and allows you to stay calm and do what needs to be done”.

Tammy Patnode couldn’t feel more strongly that “everyone should take a CPR class. And if you don’t know what to give someone as a gift, I can tell you it might be the best gift ever!”

“The thing is,” she says, echoing trainers everywhere, “you never know when you might need it”, expressing again the heartfelt grace of not only having her husband alive, but of having been an important part of that. “Of course you can’t know the value of that unless you are in that situation. But that’s when you know how strong you really are,” she says.