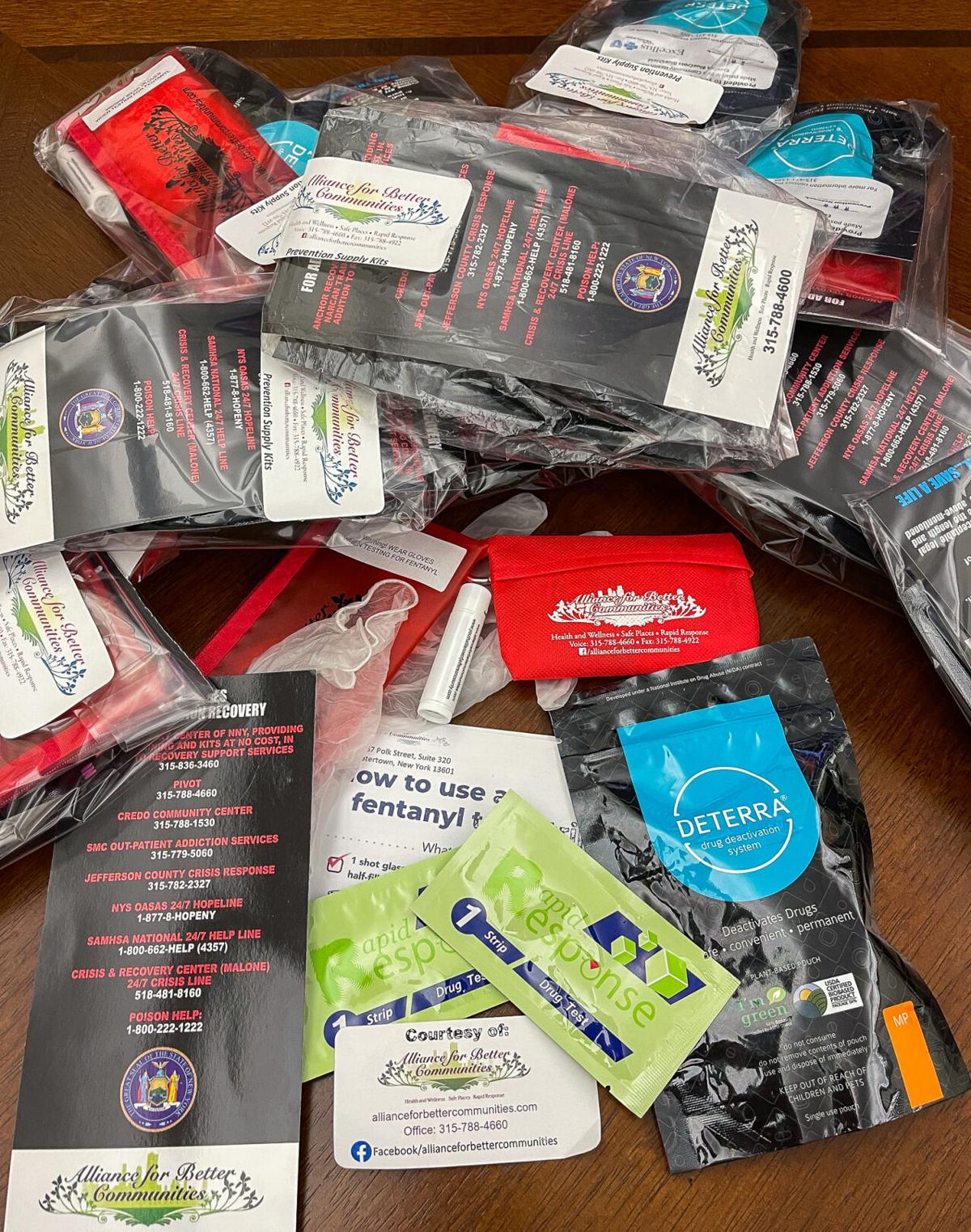 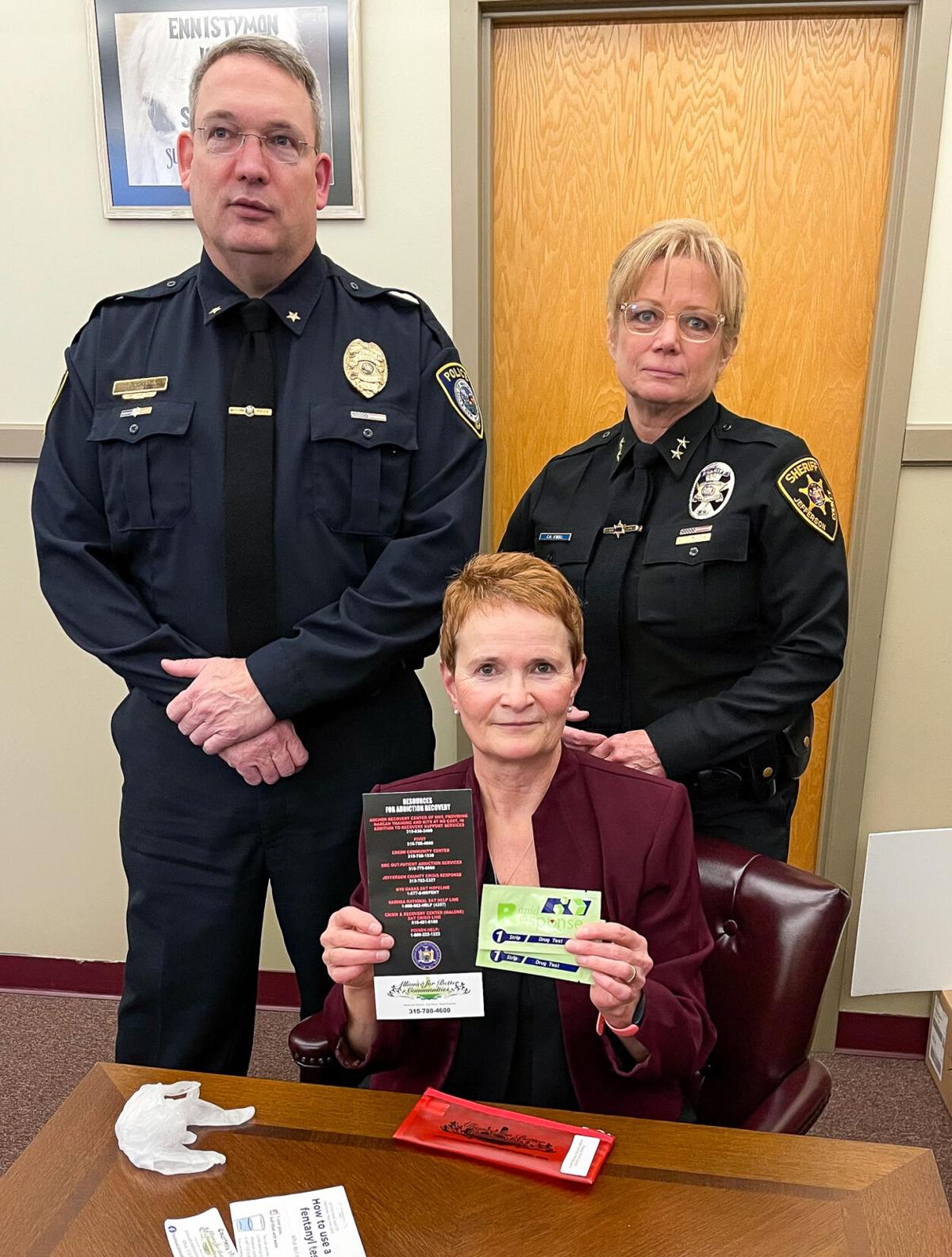 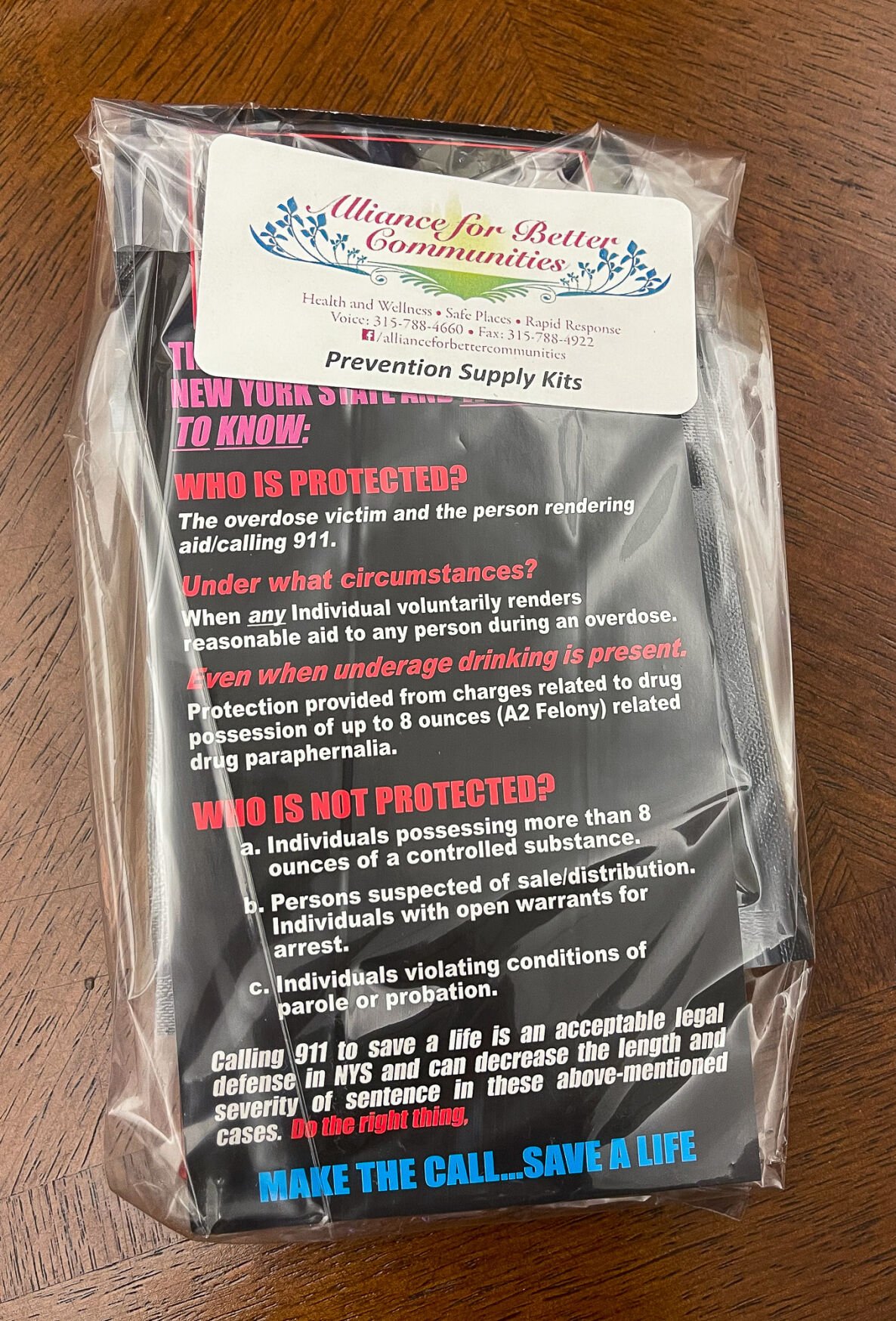 WATERTOWN — The opioid and overdose epidemic has worsened both nationally and locally in recent years, with an upward trend recorded as a result of the ongoing COVID-19 pandemic and the increased addition of fentanyl to various drugs.

According to the Substance Abuse and Mental Health Services Administration, between April 2020 and April 2021, the U.S. reached 100,000 lives lost to the opioid epidemic. In Jefferson County alone, 28 people died from overdoses in 2021, with four more toxicology reports pending.

In the previous year, the county lost 34 people to overdoses — only the tip of the iceberg, according to Anita K. Seefried-Brown, the Drug Free Community Program director for the Alliance for Better Communities. That does not take into consideration naloxone — brand name Narcan — reversals performed by first responders.

In an effort to combat the rising number of area overdoses, the Alliance is working to get Harm Reduction Kits into the hands of those who need them, no questions asked, and has partnered with the Jefferson County Sheriff’s Office to further the effort.

“I couldn’t be more proud of our partnership and the things that we’re able to provide the community,” Sheriff Colleen M. O’Neill said.

The kits, Sheriff O’Neill said, “are relatively new” and have been at the sheriff’s Records Office for a few weeks. Kits may be picked up from 8 a.m. to 4 p.m. at the office, inside the Public Safety Building at 751 Waterman Dr. in Watertown.

“You can just walk up to the front desk and ask for a kit and the gals behind the counter there will hand you one,” she said. “You don’t even have to say who you are or why you want one.”

The kits contain Deterra, a plant-based drug deactivation system that allows someone to dispose of dangerous drugs, even legal prescriptions, so they do not unintentionally fall into the hands of another.

The kits contain gloves, a small medical kit and fentanyl test strips. The Rapid Response Fentanyl Test Strips register whether deadly fentanyl is present in any other drug or substance. Also included is a “Resources for Addiction Recovery” card with contact information for agencies and services. The card explains the New York State 911 Good Samaritan Law. Under the law, people can call 911 without fear of arrest if they are having an overdose that requires emergency medical care or if they witness someone overdosing.

Anyone can call the Alliance for Better Communities at 315-788-4660 to obtain a kit directly. Jefferson County sheriff’s deputies and the Watertown City Police Department have kits available on cruisers.

The Alliance kits are funded by various grants and are assembled at the Alliance’s offices in collaboration with the Anchor Recovery Center. The fentanyl testing strips are funded through Jefferson County Public Health. The remaining components of the kits are supported by an Alliance for Better Communities Grant, according to Mrs. Seefried-Brown.

The Alliance has provided kits in areas with high crime and substance use. Feedback about use of the kits has yet to be compiled.

The Alliance provided Narcan training at a local housing area, and within a short time, one of the residents was able to reverse an overdose a neighbor was experiencing, Mrs. Seefried-Brown said.

“I said to my staff that there’s no downside to this incentive,” Sheriff O’Neill said. “If people don’t live, there’s no chance of them recovering. I want to make it clear that in no way is our law enforcement community condoning the use of illegal or unprescribed drugs, that’s not what this is about. This is about protecting and serving, and this is just another way.”

“A lot of people would probably be more cautious if they knew exactly what they were dealing with,” she added. “We’re just trying to give them that information.”

Studies from the National Institute on Drug Abuse, the lead federal agency facilitating scientific research on drug use and its consequences, have shown that people who have an option to test the substance they are about to use and find fentanyl is present, use either less or they use more slowly in order to prevent overdose, Mrs. Seefried-Brown said. Some people decide not to use at all.

The data set is not huge at this point, simply because test strips haven’t been widely available and are stigmatized, she said. adding that law enforcement getting behind the Harm Reduction Kits is a tremendous step forward in destigmatizing substance use.

“These partnerships don’t take away any of our focus or incentives on tracking down illegal drug dealers and getting these drugs off the street to the best of our ability,” Sheriff O’Neill said. “This is just in addition to the fact that we’re enforcing the laws and we’re going to make people accountable who hurt other people through these drug trades.”