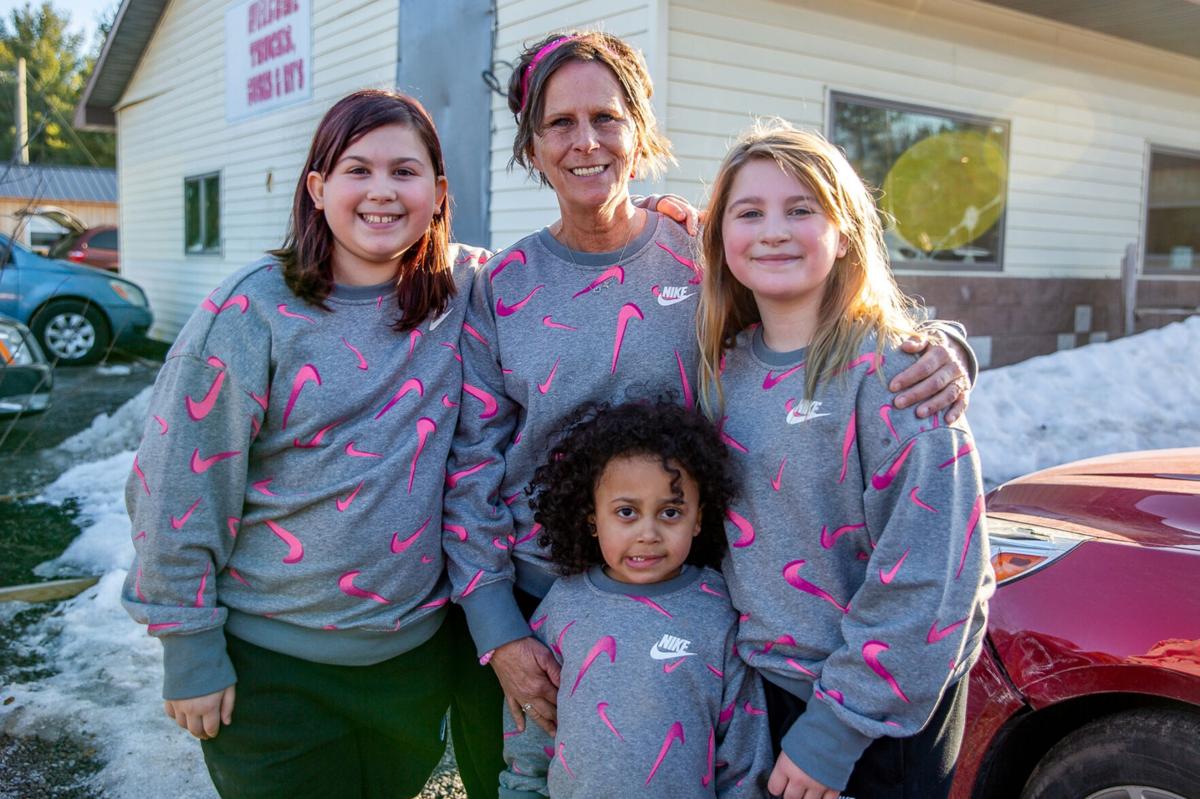 Bracelets in memory of Lisha will be on sale at the first “One Wish” softball tournament on Aug. 14. Rachel Burt/Watertown Daily Times

Lisa Jones shows off one of the T-shirts that will be sold at the first “One Wish” softball tournament on Aug. 14. Rachel Burt/Watertown Daily Times 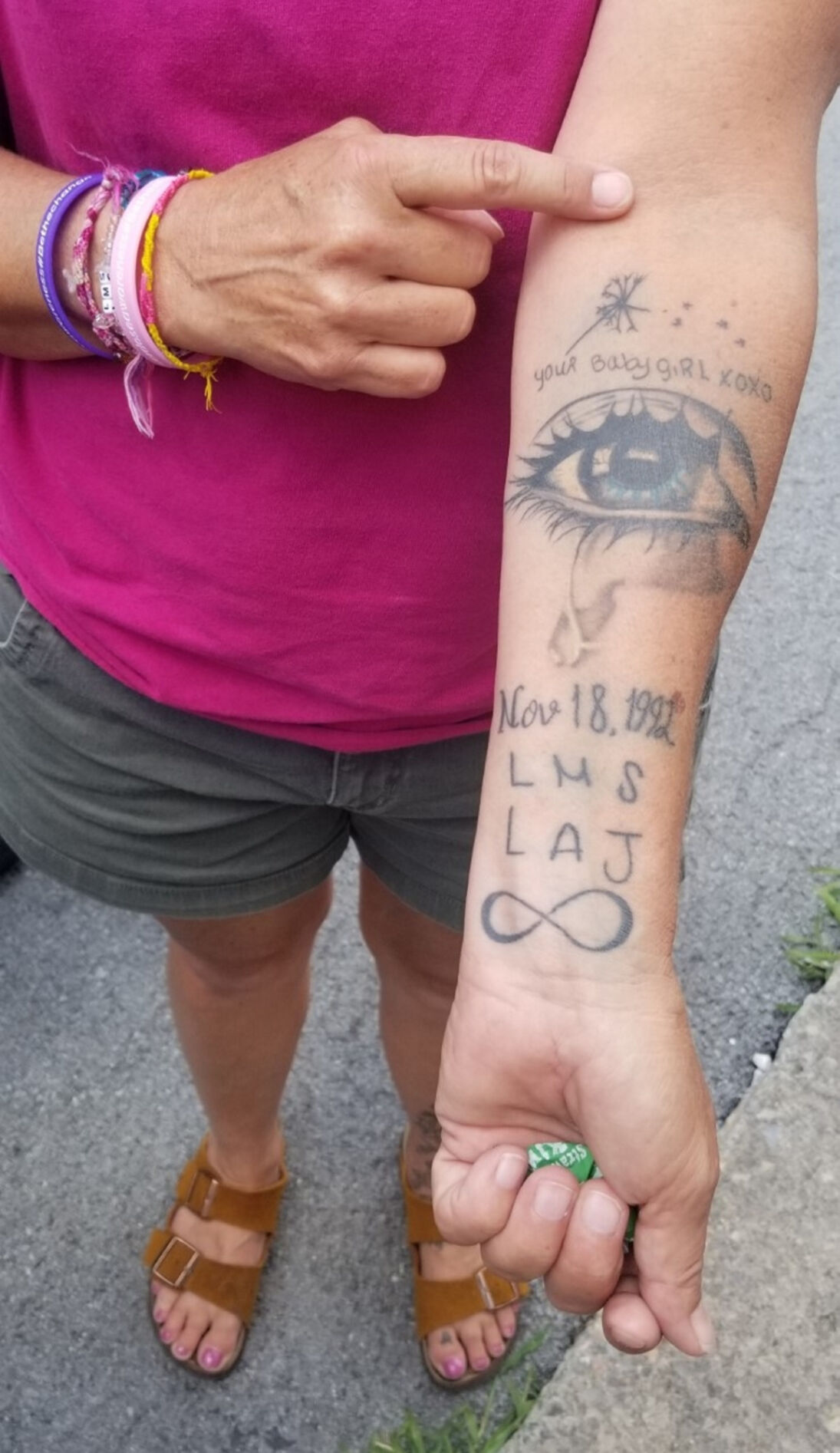 Lisa Jones shows off a tattoo she had done in honor of her daughter Lisha a week or so after she died of an overdose in March. Rachel Burt/Watertown Daily Times 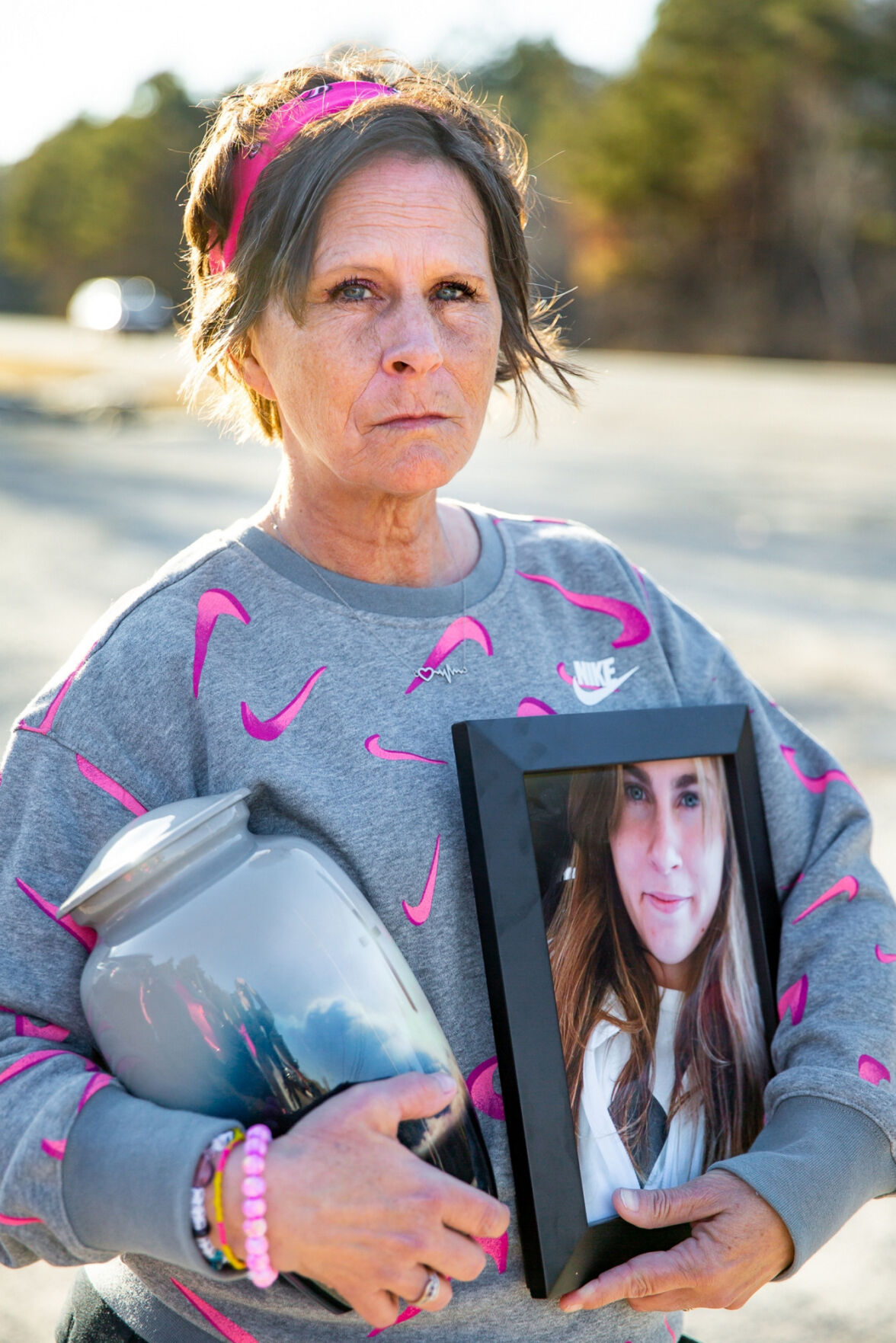 Lisa Jones, mother of Lisha M. Skeldon, who died March 10 of an overdose at 28 years old, holds a photograph and the ashes of her daughter in an urn during a celebration of her life at Meme’s Diner in Felts Mills on March 20. Kara Dry/Watertown Daily Times

Bracelets in memory of Lisha will be on sale at the first “One Wish” softball tournament on Aug. 14. Rachel Burt/Watertown Daily Times

Lisa Jones shows off one of the T-shirts that will be sold at the first “One Wish” softball tournament on Aug. 14. Rachel Burt/Watertown Daily Times

Lisa Jones shows off a tattoo she had done in honor of her daughter Lisha a week or so after she died of an overdose in March. Rachel Burt/Watertown Daily Times

Lisa Jones, mother of Lisha M. Skeldon, who died March 10 of an overdose at 28 years old, holds a photograph and the ashes of her daughter in an urn during a celebration of her life at Meme’s Diner in Felts Mills on March 20. Kara Dry/Watertown Daily Times

CARTHAGE — With the goals of raising addiction awareness and funds for both a scholarship and services to help those in need, a new tournament is set to be held next month.

This tournament came about from the need for more outreach and awareness following the death of Lisha M. Skeldon, who died in March of a drug overdose just days after being released from Albion Correctional Facility. She was 28.

“You have to start somewhere, and we’re willing to put the time and energy in it because she was worth it and so is every other person in Watertown, they’re all worth it,” Lisha’s mother Lisa Jones said. “I want it out there more, in your face, basically. If the drugs are going to be so in your face, why shouldn’t the awareness be?”

Born on Nov. 18, 1992, Lisha was released from prison on March 8 and died two days later on March 10 after being found unconscious in the room she was staying in at a friend’s house. She was rushed to the hospital, but to no avail.

When she died, Lisha left behind three children, Aleigha, Aliisah and Alijah, as well as many beloved family members and friends. Due to Lisha’s continued drug use over the years, Lisa has been the full-time caregiver of all three of her grandchildren.

The idea for the softball tournament came from organizer Shytarra J. Colón, Lisha’s stepsister. Knowing Lisha enjoyed playing softball while incarcerated, and having played softball basically all her life, Shytarra thought a tournament would be a way to honor her memory and raise awareness so hopefully other families will not have to face the loss her family has.

“I’m not creative, but knowing that Lisha was a softball player and that’s my favorite thing, I figured this would be a good way to give back,” she said.

All sign ups and fees are to go through Shytarra, who can be reached at 315-258-6846. Participants must be 18 or older to be on a team, but families are welcome to come cheer teams on and participate in other activities throughout the day.

There will also be a 50/50 raffle, and the pot is already up to about $1,200, Lisa said. T-shirts with messages of “We are the Change” for kids and “Be the Change” for adults will be sold, along with bracelets in memory of Lisha. A silent auction is also set to take place.

Food will be available by donation, and Lisha’s kids will be selling from their lemonade stand the day of the tournament. To Lisha’s family, it is not about the money, but bringing people together.

“It’s just pulling people together to show those who are struggling that we see them, they’re not just a statistic to us,” Shytarra said.

The cost to participate in the tournament will be $200 for each team, and there can be as many people on the teams as the captains want, but there always have to be three girls on the field at all times. Shytarra said she also hopes to have things like face painting available, trying to make it not just about softball, but also a family fun day.

For the tournament, Shytarra will have her own team, and then her father, Michael Lemon, and Lisa will have a team formed with their close friends. Lisha’s older sister Ashley and their brother, Trevor Skeldon, will have their own team, which will possibly be named the “Hood Babies” after a tattoo Lisha had.

Lisa and her sister, Betty Mullaney started a scholarship in Lisha’s name, so part of the money raised by the tournament will go towards the scholarship.

“This scholarship, I would love for it to be for somebody that turned their life around, but when it’s time to get the scholarship out and there’s nobody in that range of people, then it’s gonna go to the high schools either Gouverneur, Chaumont, Watertown — wherever Lisha grew up,” Lisa said. “It’s going to go to the C student, not the A student. The person that’s trying to get there, because I really wanted to represent Lisha, I want it to go to the second chance person.”

Money raised will also go to the Watertown Urban Mission’s Bridge Program, which is aimed at helping people recover from addiction and be productive members of the community. Clients are sentenced to the Bridge Program by a court to help them restore and rebuild their lives.

Lisa said it is important the money stays local and goes toward helping those struggling in the community.

Those interested in participating can sign up until Aug. 11 in order to give Shytarra time to create a schedule of when the various teams will play. The $200 registration fee will be due the day of the ASA tournament. For those without equipment, some has been donated for the event.

With overdoses continuing to be all too common in the area, Lisa and her family, as well as friends, are constantly trying to bring awareness. She noted that she received Lisha’s autopsy report and along with the overdose being confirmed as the cause of death, the toxicology report showed that it was “basically pure fentanyl,” which was not Lisha’s drug of choice but more than likely cut into the heroin she used.

Lisha was staying with her friend Alexis L. Weaver and her husband at the time of her death. The two found her and while Alexis said Lisha’s family has obviously suffered the most, she and her husband have been affected as well, that she still has nightmares.

Aleigha, Aliisah and Alijah will spend the rest of their lives missing their mother, wishing they could see her again. With everything that happened with her daughter, Lisa is determined to keep the kids involved with addiction and drug awareness and what drugs can do to a person. She noted that Lisha came from a good family and was not exposed to drugs at home, but they are so easy to get into, and she does not want the kids to ever follow in their mother’s footsteps.

The other day, Lisa caught Alijah putting stickers on a framed photo of Lisha that was hanging on the wall of their home. When she asked what he was doing, he replied that he was “putting a necklace on my mommy.” She said she never wants another young child to experience such loss.

Shytarra noted that for families in similar situations to hers, it is OK to be angry because she is, and it is OK to feel whatever they are feeling.

“I see arguments about whether it’s a disease, whether it’s a choice or whether it’s a lifestyle,” Shytarra said. “I just feel like the only way we can show people is to kind of put it out there that it’s just like a monster that takes over.”

Shytarra hopes to one day be part of the drug task force. She said that while she cannot change everything, even if she can change one person’s view, it is a start. Right now she is in school and wants to start off as a sheriff’s deputy, but her ultimate goal is to make it to the task force. While she herself might not be able to change the process, she said she can be part of it and hope to inspire people to be better.

Lisa said she does not blame anyone for Lisha’s death and she hopes to help save others, even just one, from ending up how Lisha did.

“If I save one person in Lisha’s name, I’ll be the happiest girl,” Lisa said. “She will never just be another addict. While there’s breath in my body, I’ll be screaming her name until the day I die.”