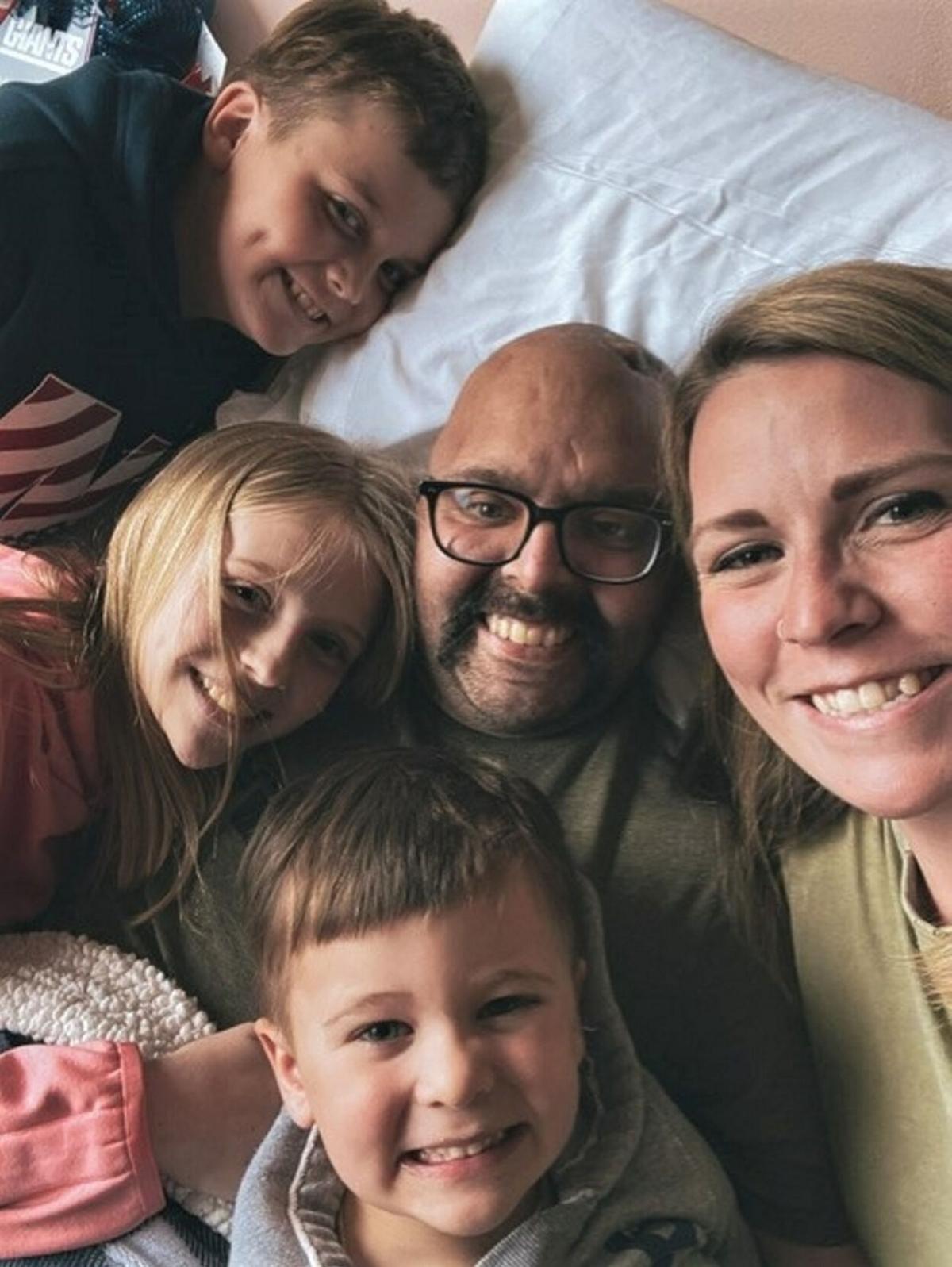 The Nunez kids, from left, Bennett, 9, Braelyn, 11, and Maddox, 3, smile for a photo with their parents Joseph “Joe” R. Nunez and Lindsey R. Nunez. Provided photo 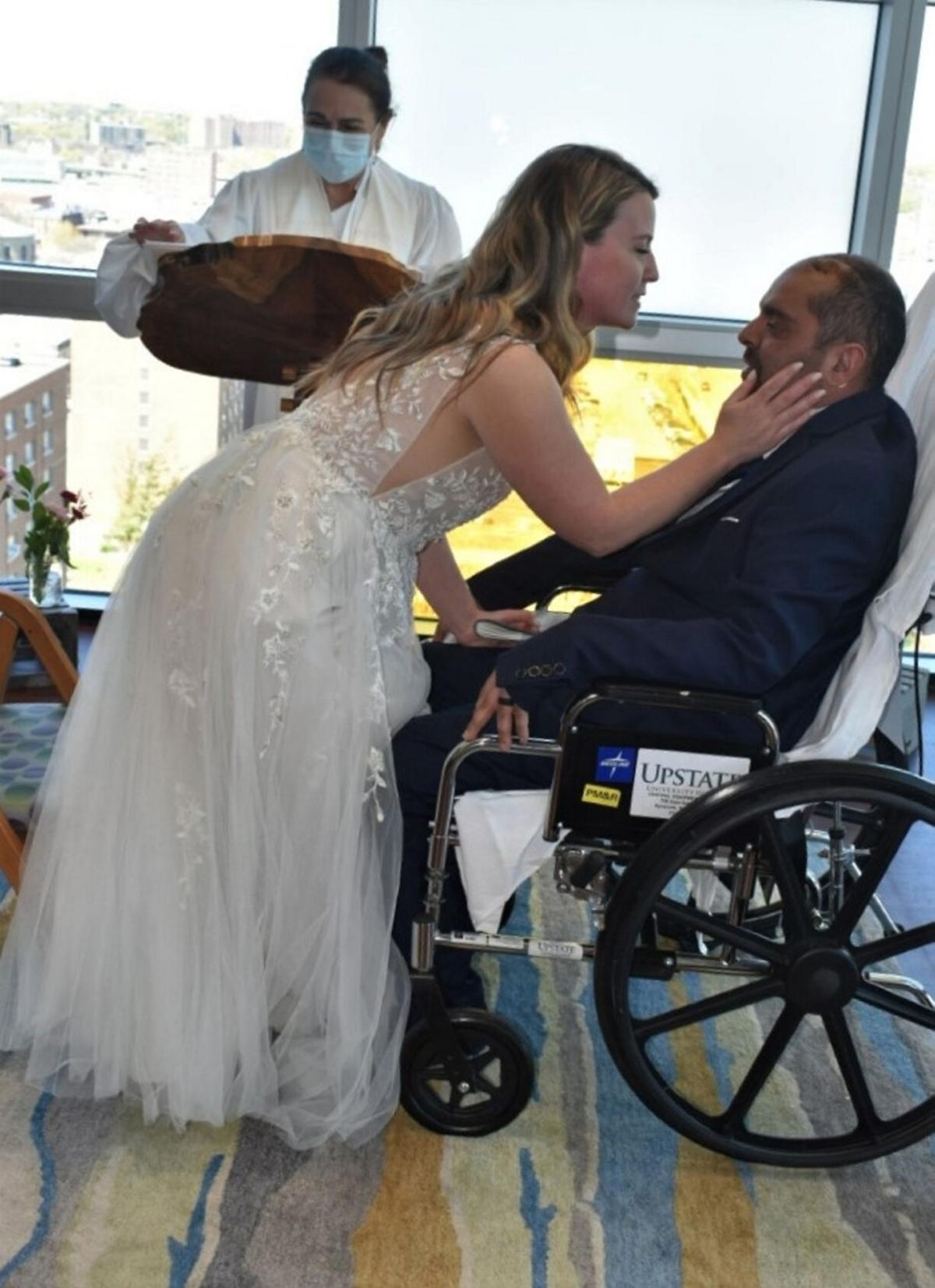 Lindsey R. Nunez leans toward her husband, Joseph R. Nunez, on their wedding day at Upstate Medical Center in Syracuse, where Joe was being treated for glioblastoma. Provided photo 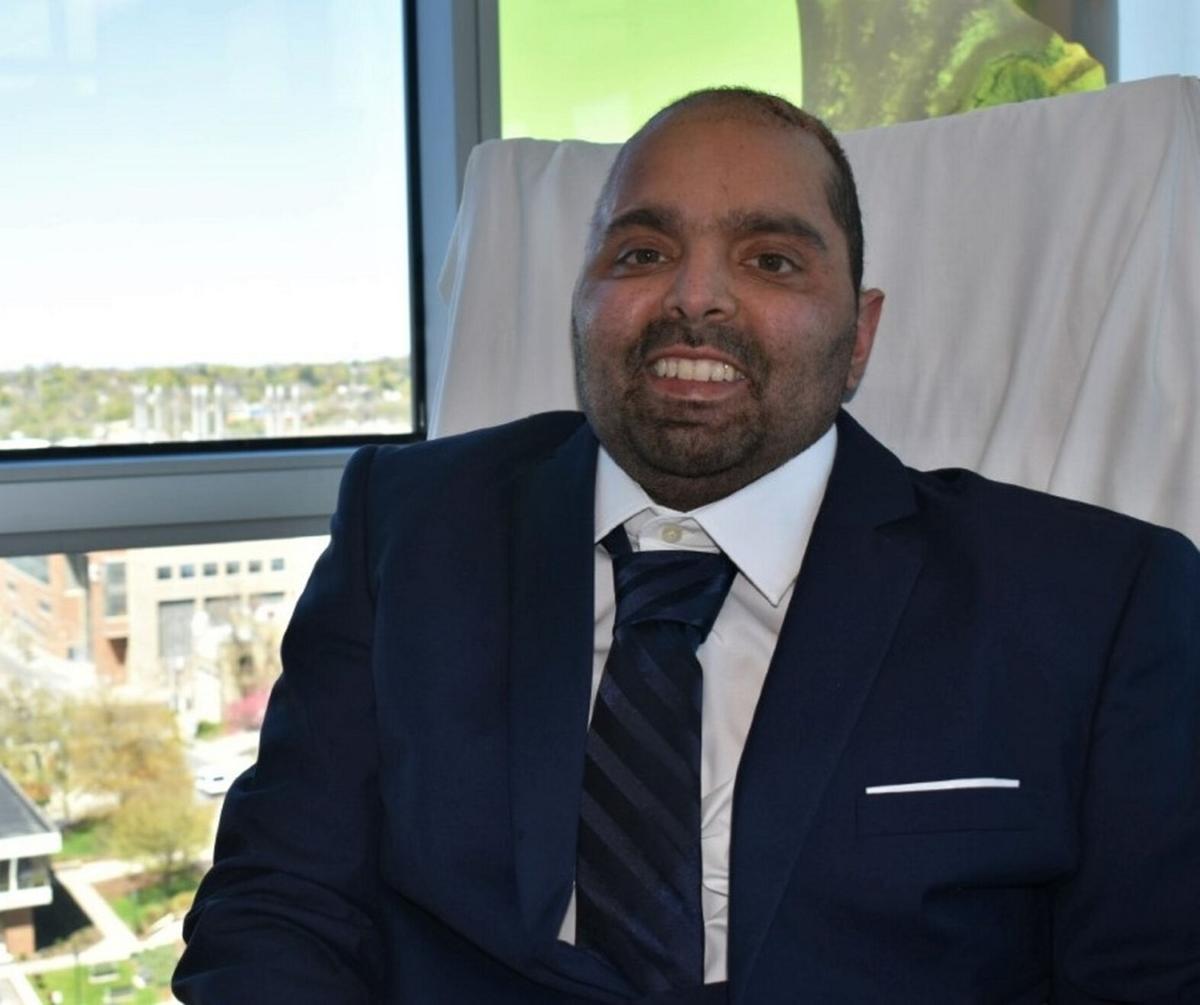 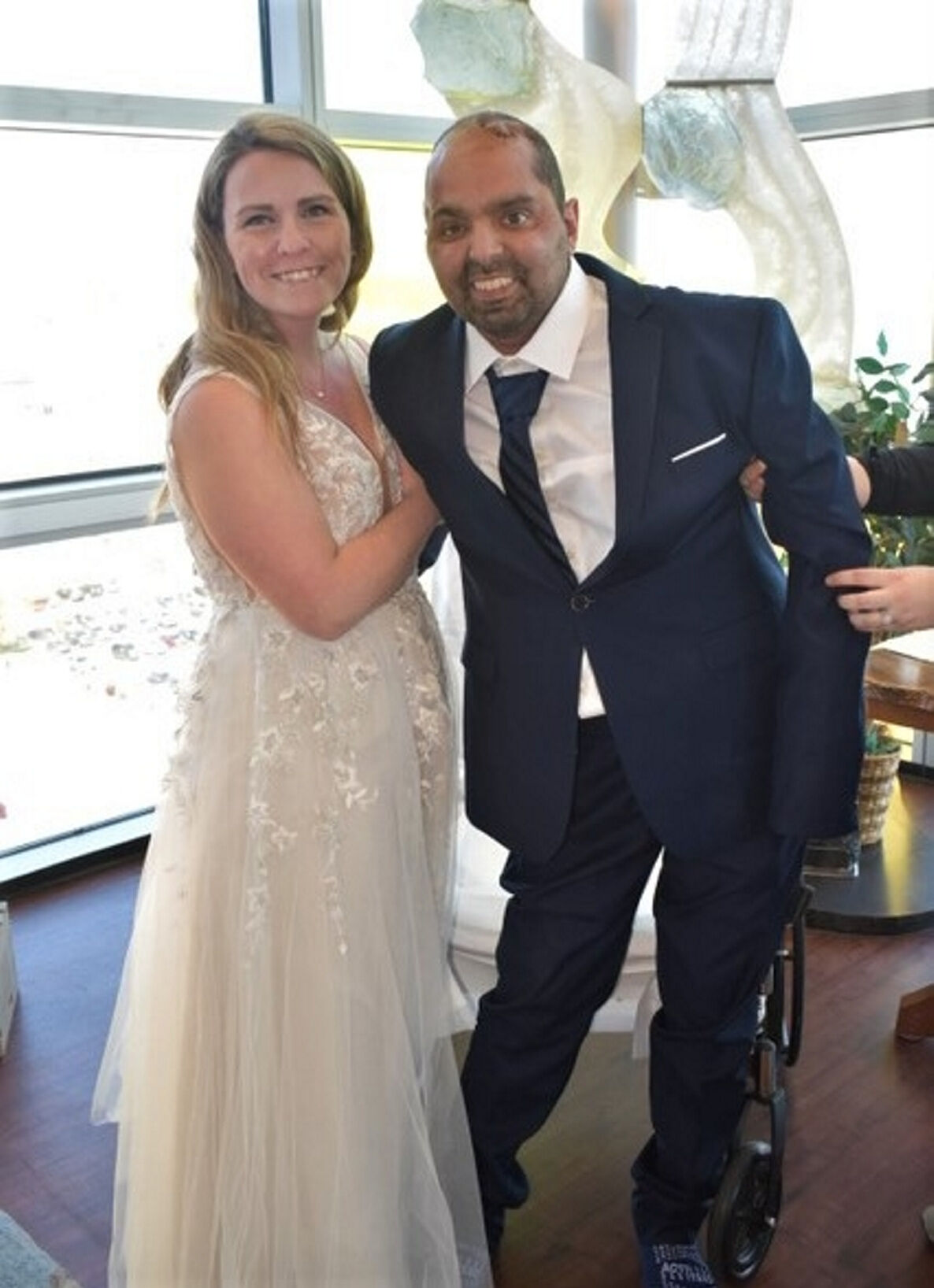 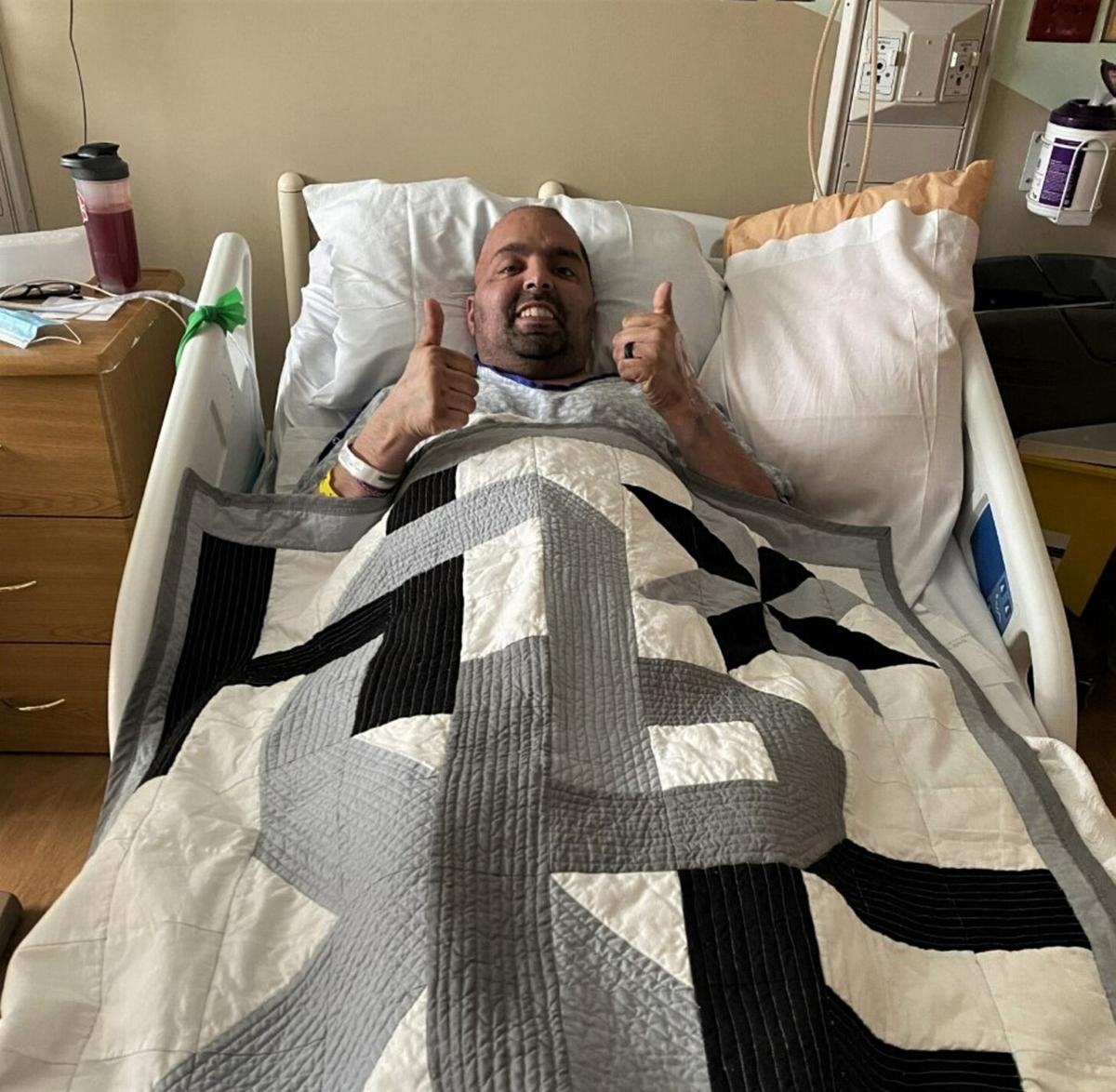 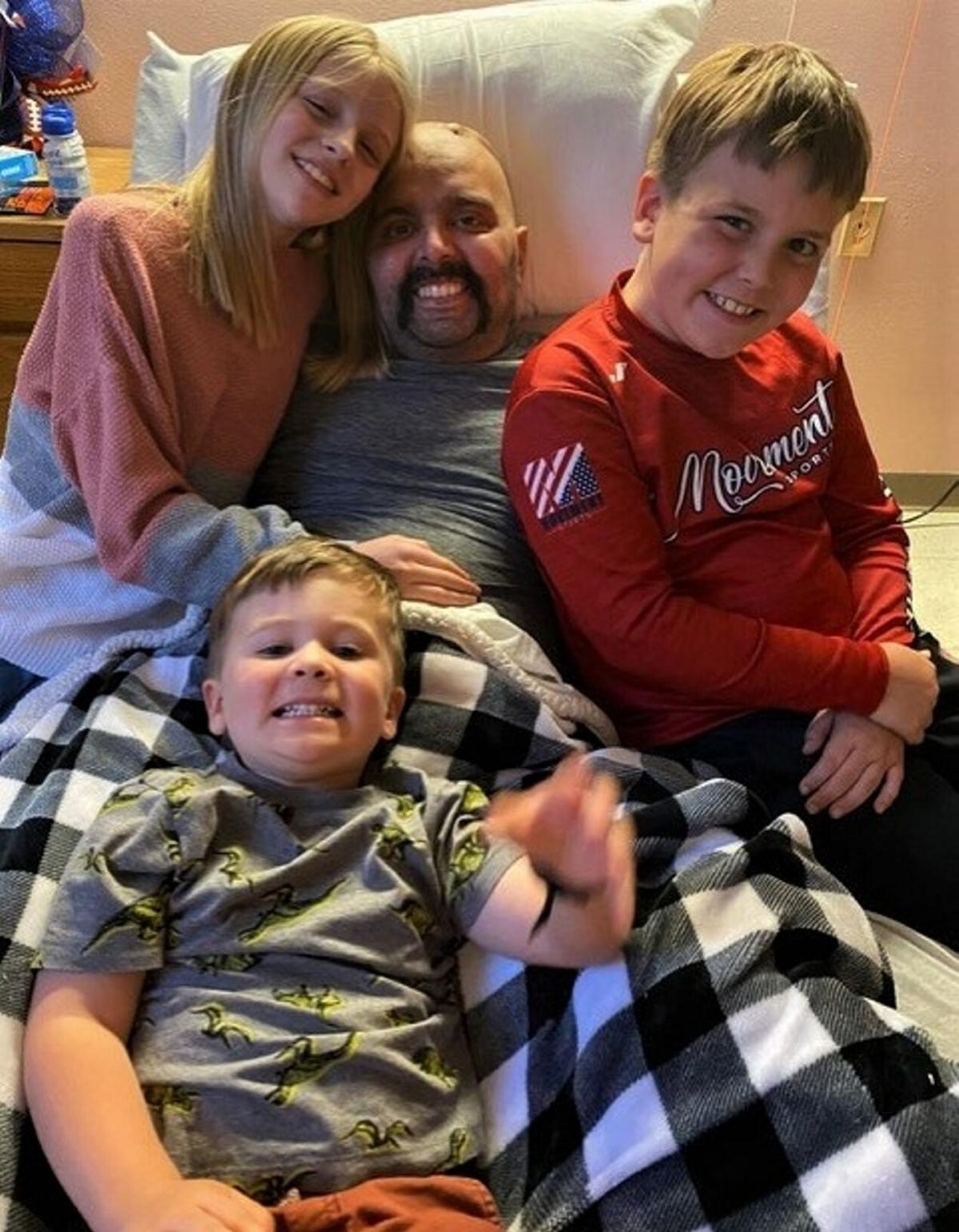 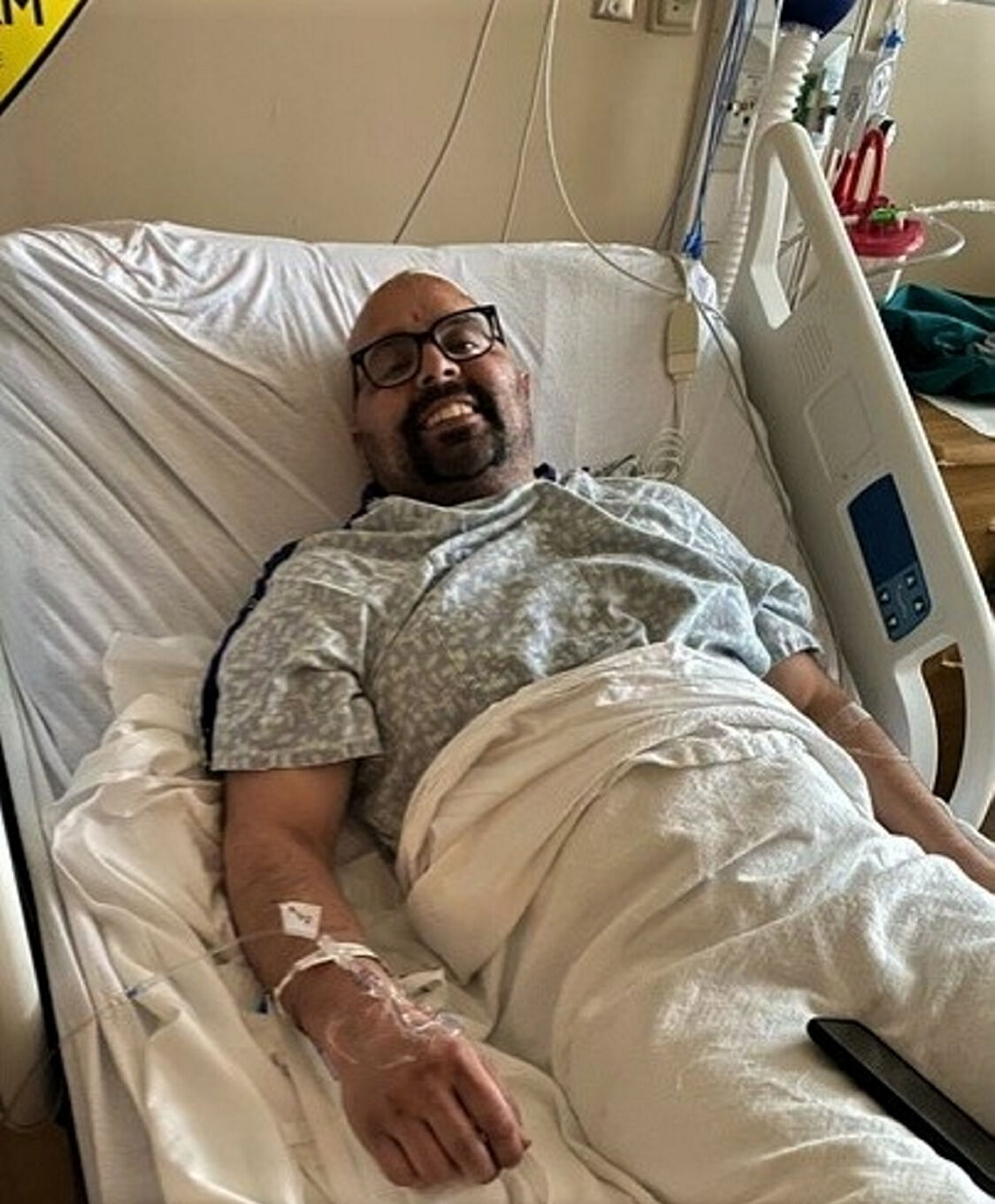 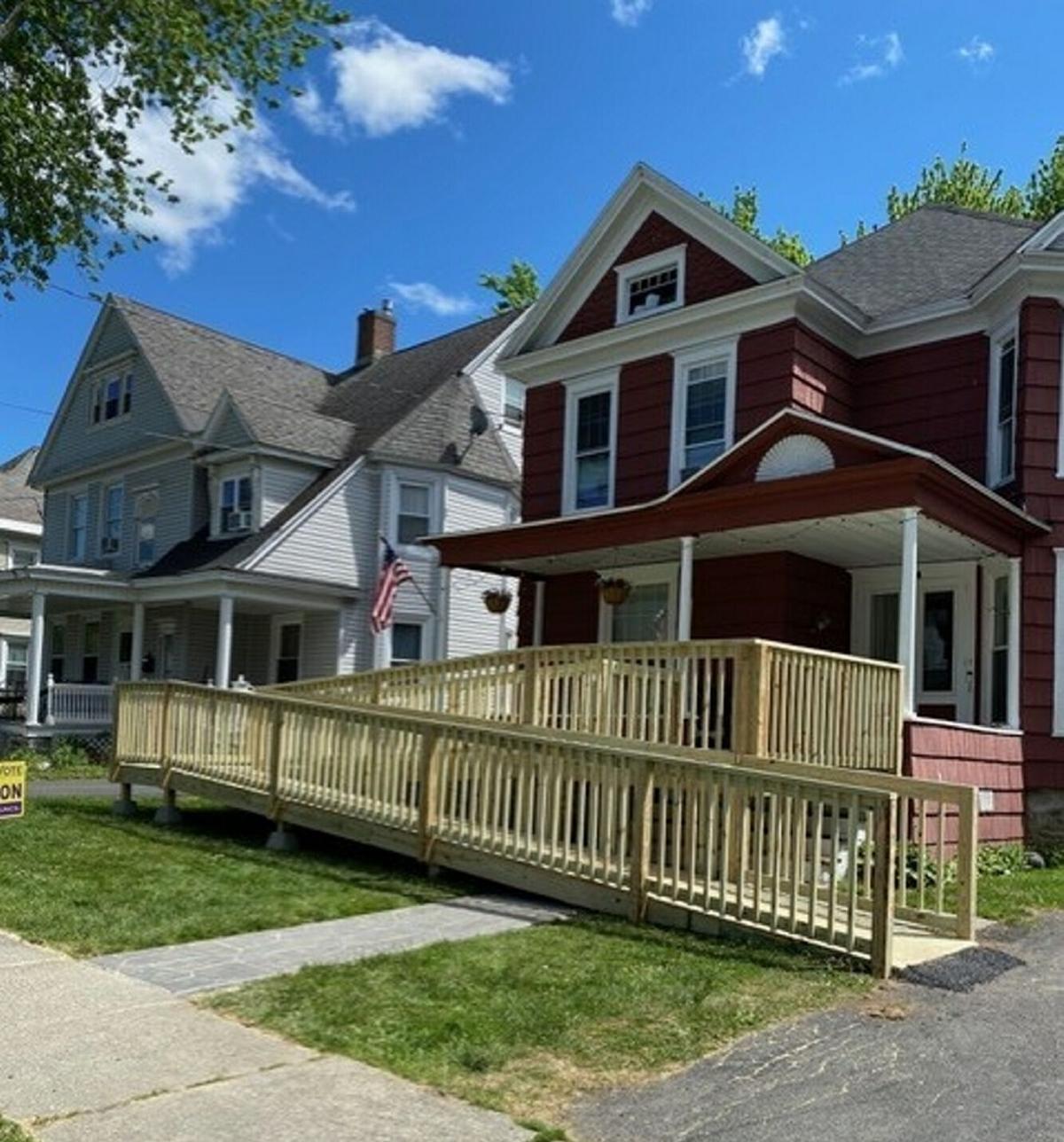 The Nunez kids, from left, Bennett, 9, Braelyn, 11, and Maddox, 3, smile for a photo with their parents Joseph “Joe” R. Nunez and Lindsey R. Nunez. Provided photo

Lindsey R. Nunez leans toward her husband, Joseph R. Nunez, on their wedding day at Upstate Medical Center in Syracuse, where Joe was being treated for glioblastoma. Provided photo

WATERTOWN — Hopeful and thankful. Amid all the tough moments — of which they’ve probably had more than their fair share, and feelings of sadness and worry, those are the two feelings at the forefront for the Nunez family.

Sitting at his desk at work last January, with no prior symptoms, Joseph “Joe” R. Nunez, 34, started experiencing chest pain and numbness in the fingers, later waking up in the hospital to be told he’d had a grand mal seizure. This would be the beginning of a long, hard journey for both Joe and his family.

On Feb. 4, 2020, Joe was told he had a malignant tumor growing on his brain, later returning to Upstate Medical Center in Syracuse for an eight-hour craniotomy and biopsy on the right temporal lobe to discover how aggressive the glioma was. About a week later, Mr. Nunez received the news that this cancer is glioblastoma.

Glioblastoma can form in the brain or spinal cord and begins in cells called astrocytes that support nerve cells. It’s the most aggressive type of tumor that arises in the brain and one of the most lethal forms of brain cancer, according to the Glioblastoma Foundation.

According to his wife, Lindsey R. Nunez, while there are moments where Joe is still very optimistic and positive minded, there are also the moments where he starts to hit a wall of depression with the realization that he is going to die, that GBM is inevitable.

“We don’t know, obviously, when that is,” she said. “We hope for years, but we don’t know. He is confused, sometimes I have to remind him of where he is or the year, his age, little things like that, but we can deal with that. He still is very clear-minded at times. I call it a Yo-Yo, you go back and forth.”

Joe has gone through numerous rounds of radiation, chemotherapy and MRIs. Along with the tumor found on the back of his cerebellum, two little ones were found on his left and right ventricles and were suspected to be in his spinal fluid as well. He has previously said that with his leptomeningeal disease, where the cancer is spread into the spinal fluid, there are not a lot of options for treatment.

The news of Joe’s diagnosis prompted an outpouring of community support for Joe and his family. With the family having large medical bills and added expenses to worry about, family friend Catherine Towles decided to get involved last year and try to raise some money to cover medical bills and whatever else the family may need. Currently, there is a fundraiser on Facebook to benefit Joe under the page “Help Joe Fight.” There are also “Help Joe Fight” shirts for sale. Previously, there was a cornhole board that Coty Morgia and Tommy Mackey made to raffle off.

During treatment, the community will make sure Joe and his family are taken care of. Joe has had to take a step back from being a full-time car salesman with FX Caprara Honda in Watertown, adding to the financial strain on the family. Though the Nunez family are independent people who like to do everything themselves, and find it hard to be in the position of struggling financially, they are grateful for the support they continue to receive.

Months ago, Joe was starting to lose balance in his movements and walk. He was dizzy for probably six months, but it was progressing rapidly due to the big cerebellum tumor that was getting bigger and bigger through each MRI scan. He had four tumors in his brain, but that was the one causing the most issues throughout his body, and then the family came to find out he had hydrocephalus building pressure in his ventricles.

“March 29 he had an appointment with his neurosurgeon, who scheduled immediately a ventricular shunt procedure to be that following Wednesday,” Lindsey said. “That evening, he stopped eating, then he went right to sleep. Tuesday, the 30th, he was just sleeping. He wasn’t getting up to eat, wasn’t getting up to go to the bathroom. I’m like, ‘Something’s not right,’ then I hear a loud boom. He tried to get up himself to go to the bathroom and he fell, his balance was gone.”

She called Joe’s neurosurgeon and was told he needed to be transported to Upstate immediately. Shortly after Guilfoyle got him there, he was in for surgery; without which he was going to lose all function of his arms and legs, possibly more. Luckily, the surgery went well, during which they put in an Ommaya reservoir, which is an intraventricular catheter system that can be used for the delivery of chemotherapy into the cerebrospinal fluid.

Joe was at Upstate from March 30 until May 5 and has not been able to fully walk again. He started a clinical trial drug and takes chemotherapy twice a day. He didn’t eat for probably about three weeks, but has slowly started eating again, gaining some strength back. Lindsey said he has lost probably 45 pounds and his legs are small due to lack of movement.

Finally, he is starting to regain some movement in his legs and was discharged to Carthage Center for Rehabilitation and Nursing, where they are able to administer his chemotherapy as well as do an acute rehab.

While Joe was at Upstate, Lindsey went down to visit practically every day, putting thousands of miles on her vehicle in that time. Visiting hours were from 2 to 6 p.m., making it difficult to get back home by 7:30 p.m. with the kids. She recalled that making it work was really difficult. At Carthage Center, the kids are able to visit their dad and Joe is able to sometimes go outside on good days.

“This is very difficult, very confusing for them,” Lindsey said. “We are very honest and upfront and explain every detail that we can with them so they can understand what is going on to the best of their abilities.”

Joe and Lindsey bought their first home in July 2019. That home now features a wheelchair ramp outside for when Mr. Nunez is able to return home. Lindsey posted on her personal Facebook page about the need for a ramp and just days later, it happened thanks to Josh Thompson and Steve Baker of B&T Construction & Masonry Inc. for the work and the Caprara family for the donation of materials.

The high school sweethearts got together when Lindsey was a sophomore and Joe was a senior. All these years later, they’re still going strong and have three children together: Braelyn, 11, Bennett, 9, and Maddox, 3.

Though the avid hikers dreamed of being married in the Adirondacks in the summer after Lindsey finished with school, the plan shifted due to Joe’s declining health. Instead, on a somewhat random Monday, April 26, the two were wed on the 12th floor of Upstate Medical Center. Due to COVID-19 restrictions, their kids were not able to join them for the ceremony.

Their social worker at Upstate, Jayne Lewis, not only helped with getting the wedding together, but also made little videos of certain people who were close to the couple to make their wedding special for them.

“We already had everything set up, I had suits and a dress for my kids, Joe had a suit and I had a dress,” Lindsey said. “Joe was wheeled up, he was exhausted the entire time because at that point even getting dressed was exhausting for him. It wasn’t the dream, but we did it.”

Though Joe is the one with the diagnosis, he is not the only one dealing with it. The road has been hard for his family, too, from the kids not being able to see their dad to Lindsey sleeping alone each night and missing her husband while putting on a brave face for their kids, posting updates on Joe’s health, and keeping it all together when it would be so easy to fall apart.

What has helped the family through has been support both near and far, from the local community to a former president and a member of a rock band. These instances help to remind them they’re not alone, they have a large network of supporters rooting for them. Two of those supporters are former President Donald J. Trump and guitarist Rob Baker of The Tragically Hip.

Brooke and Frankie Caprara, wanting to do something special for Joe, who is a huge supporter of the former president, reached out and told him a bit about Joe.

The former president then sent a personal video message to Joe, which Lindsey said was amazing even if she doesn’t agree with her husband when it comes to politics.

Because the two are very big fans of The Tragically Hip, the first video Joe received was one from Rob Baker last year after one of Lindsey’s friends emailed him to get one. His bandmate, Gordon E. Downie, lead singer of group, died of glioblastoma in 2017 at the age of 53.

“I don’t even have words,” Lindsey said of the various showings of support the family has received. “I feel like every time I say I’m grateful, I don’t even know if that’s even big enough; we’re just really thankful for everybody that we have and everybody that’s been helpful with our children, with financials, everybody that’s reached out. We’ve had people we haven’t talked to in years reach out and that’s amazing as well, it’s heartwarming. Every single person has been amazing.”