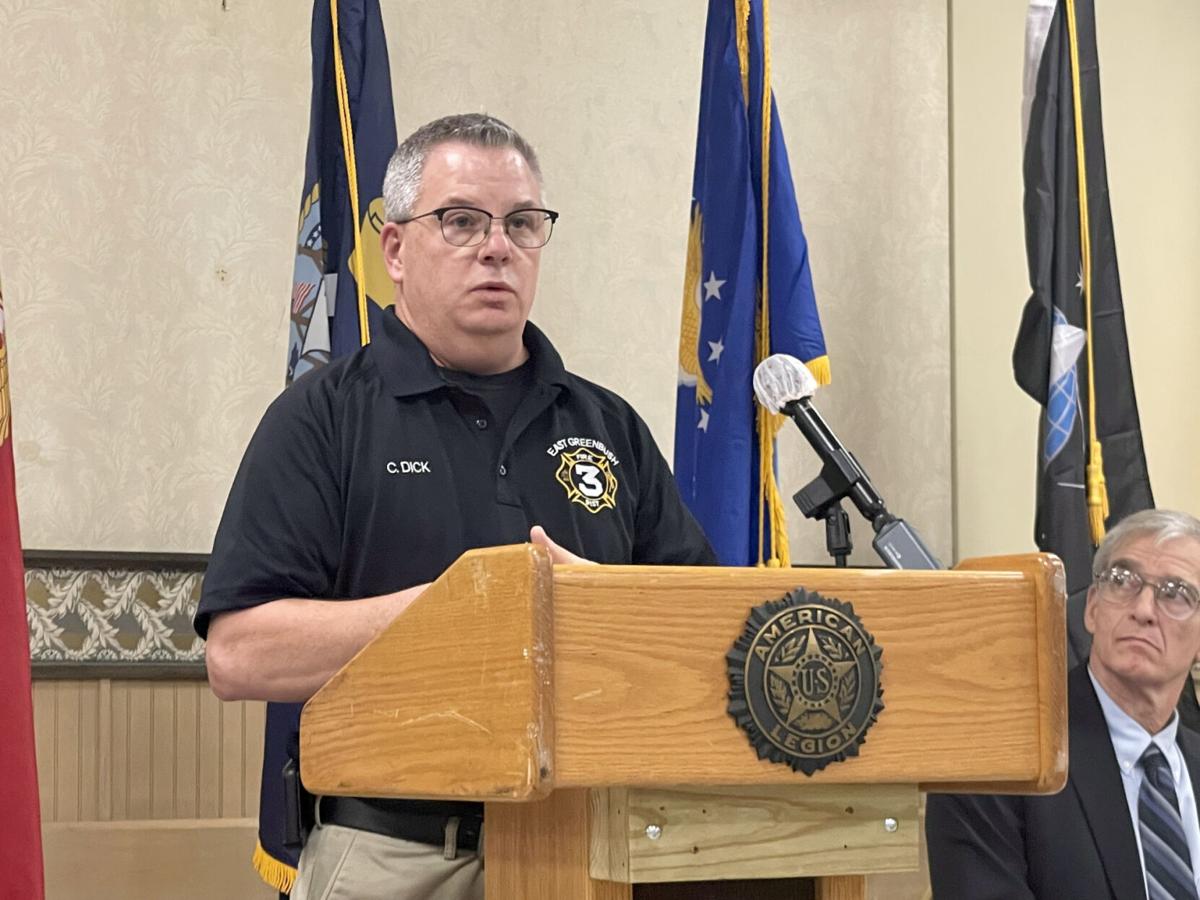 Christopher Dick, a life member of the East Greenbush Fire Department, became emotional during a forum at the American Legion Melvin Roads Post 1231 in Rensselaer on Wednesday recalling his struggles with PTSD and getting mental health treatment as an emergency responder. Kate Lisa/Johnson Newspaper Corp. 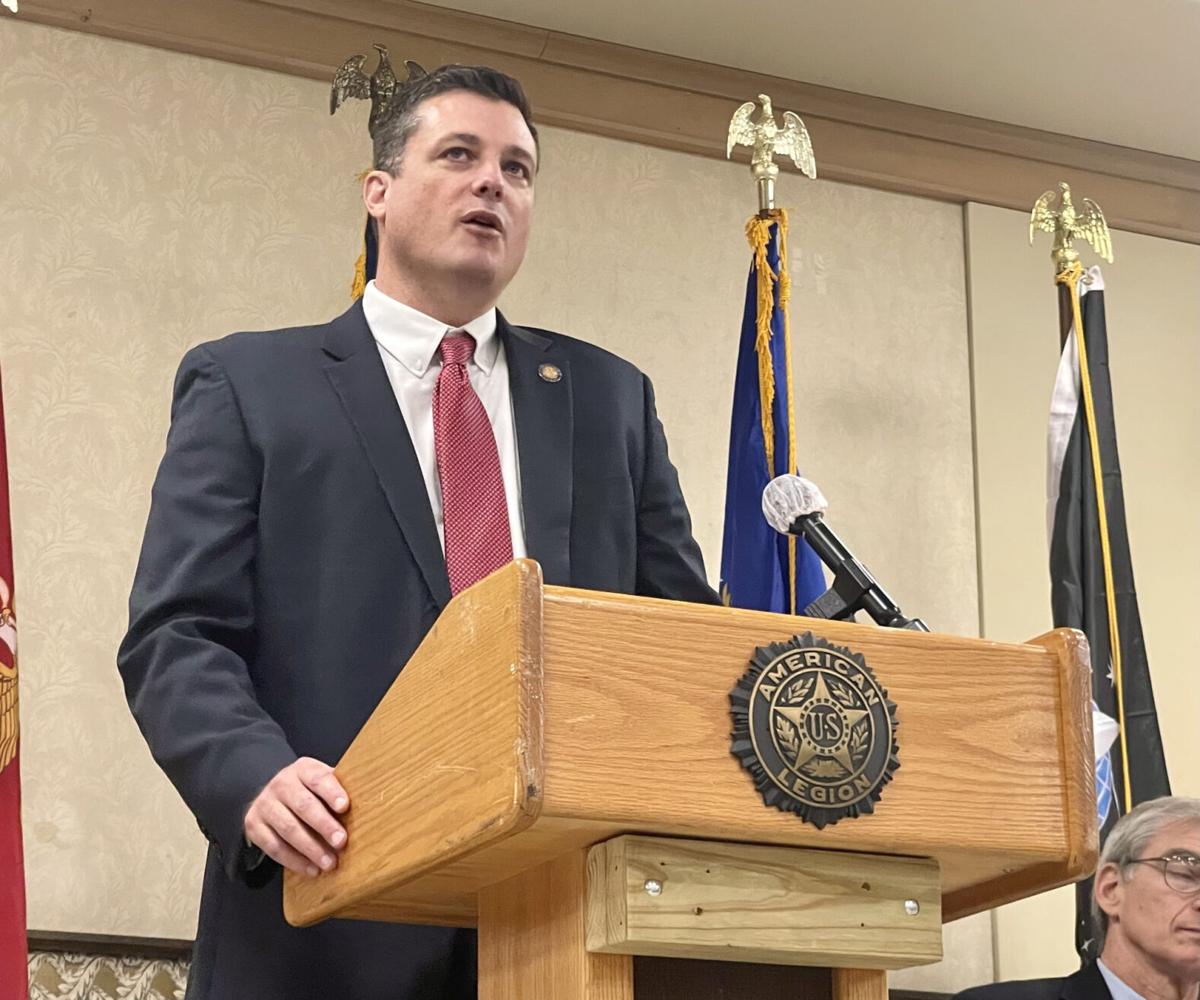 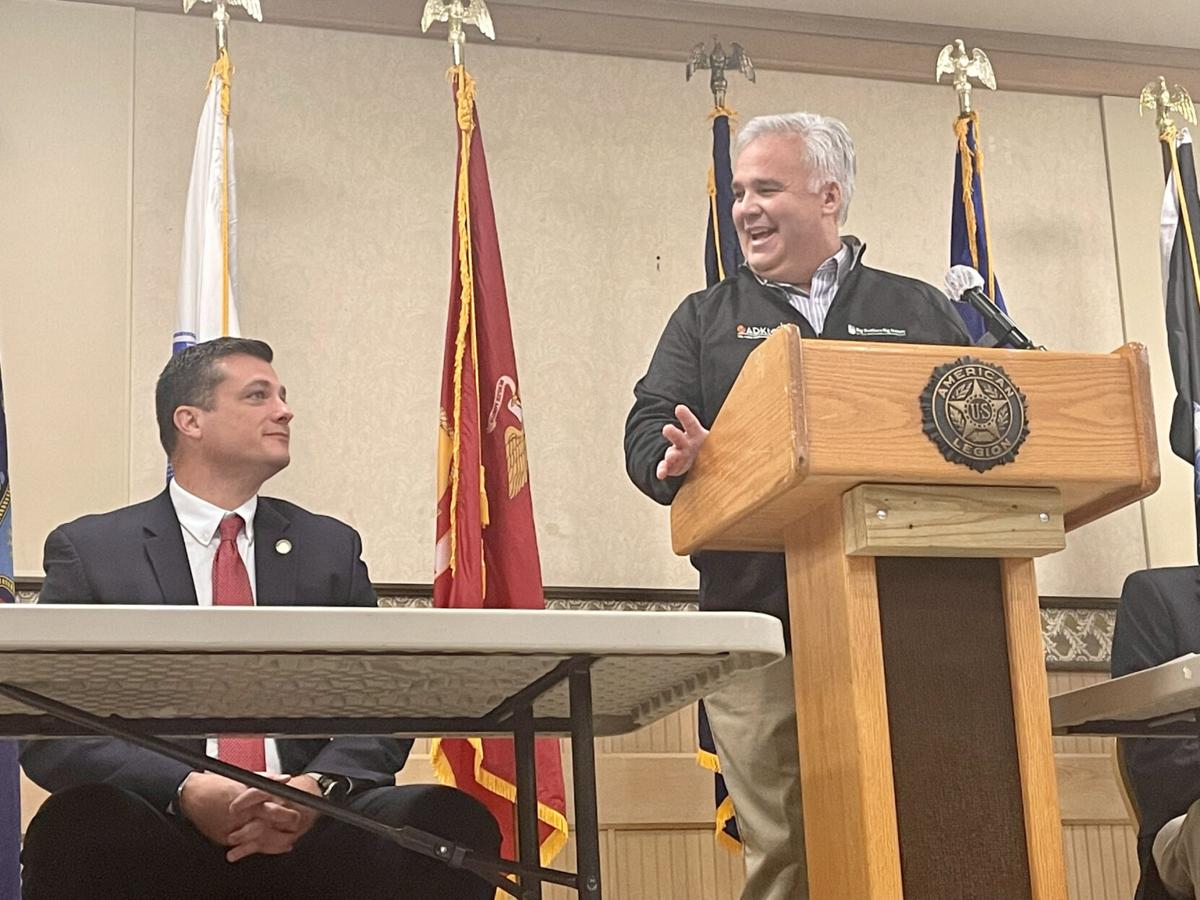 Christopher Dick, a life member of the East Greenbush Fire Department, became emotional during a forum at the American Legion Melvin Roads Post 1231 in Rensselaer on Wednesday recalling his struggles with PTSD and getting mental health treatment as an emergency responder. Kate Lisa/Johnson Newspaper Corp.

Christopher Dick was at home enjoying a weekend evening cocktail with his wife when 35 years of buildup of emotion from responding to emergency incidents unraveled.

Dick, a lifetime member of the East Greenbush Fire Department, was diagnosed with severe post-traumatic stress disorder two years ago.

“I absolutely lost it,” he said. “Thirty-five years of emergency services — fire service, ambulance — literally came flooding out in an hour-and-a-half. It was extremely difficult for me.

“Those that are in emergency services, fire service, we’ve always held it within us that we are the tough guys,” Dick continued. “We are the ones that are out there to help someone. We hold it within us and there’s a point where you just can’t hold it anymore.”

Dick did not have suicidal thoughts, as is common for veterans and emergency personnel suffering from PTSD, but was at a loss about how to get help.

The fire department Board of Commissioners told Dick the department’s insurance did not cover any type of mental health or PTSD treatment. He was forced to use his own personal time and medical insurance.

“I had to take time off — I had many doctor’s appointments,” the lifetime emergency volunteer recalled, adding he took off at least six weeks, at first.

“My employer wanted to know what was wrong with me and I couldn’t explain it to them,” Dick said. “Fortunately, I’ve gotten to the point now where it’s a lot better. I do have days, I do have moments.”

Dick is not alone. He is one of thousands of first responders in the state to suffer from PTSD and other mental health issues.

Law enforcement officers and firefighters are more likely to die by suicide than in the line of duty, according to a January U.S. Surgeon General’s report from the U.S. Department of Health and Human Services.

Emergency medical service providers are 1.39 times more likely to die by suicide than the public. Studies have found that between 17% and 24% of public safety telecommunicators have symptoms of PTSD and 24% have symptoms of depression, according to the report.

Assemblyman Jake Ashby, R-Castleton, is sponsoring several pieces of legislation to make addressing PTSD a priority in the 2022 legislative session, which starts Jan. 5.

“There’s no single remedy for this,” he said. “There’s not one piece of legislation that’s going to fix this. It’s through a combination of efforts and it comes across the scale of government at the federal level, the state level, the county level...and even outside of government. This is not a government-only solution.

Ashby on Wednesday hosted a two-hour forum with veterans and first responders from around the Capital Region — the first of six regional roundtables to be held around the state raising awareness for the No Surrender Veteran Initiative. Many veterans and emergency personnel shared personal stories or asked questions about PTSD and related treatment with Ashby, Assemblyman Matthew Simpson, R-Horicon; and retired Col. Peter Goebel, director of the Rensselaer County Veterans Services.

Ashby sponsors four of 11 proposed bills supported by the Assembly Republican Conference as part of a PTSD-fighting initiative.

Ashby, a captain in the U.S. Army Reserves, completed a tour in Iraq and Afghanistan as a medical officer during his service from 2006 to 2014, and knows the difficulties of PTSD firsthand.

A friend of Ashby’s who he served with in Afghanistan died by suicide last week. The assemblyman paused, swallowing back tears, when remembering his brother in arms.

“I haven’t been reticent on my own struggles coming back after my deployments,” said Ashby, adding support from his loved ones significantly helped him. “...My friend, Staff Sgt. Parks, didn’t have the great support system I had and, at one point, became lost in ways that I don’t think are familiar with many of the people back home.”

Other bills in the package would require the state Education Department, state Office of Mental Health and Office of Alcoholism and Substance Abuse Services to create a website dedicated to information about behavioral health issues including depression, eating disorders, anxiety, schizophrenia, PTSD and bipolar disorder; would expand leave of absence for military spouses, expand benefits for volunteer firefighters and ambulance workers and designates certain emergency and public safety dispatchers and operators as first responders, among others.

The bills have growing bipartisan support. Ashby is encouraged they will get the needed backing to pass both houses of the Democratic-controlled Legislature next session.

The next No Surrender Veteran Initiative event will be held on Long Island from 6 to 8 p.m. Dec. 8 at Nassau Community College in Garden City.