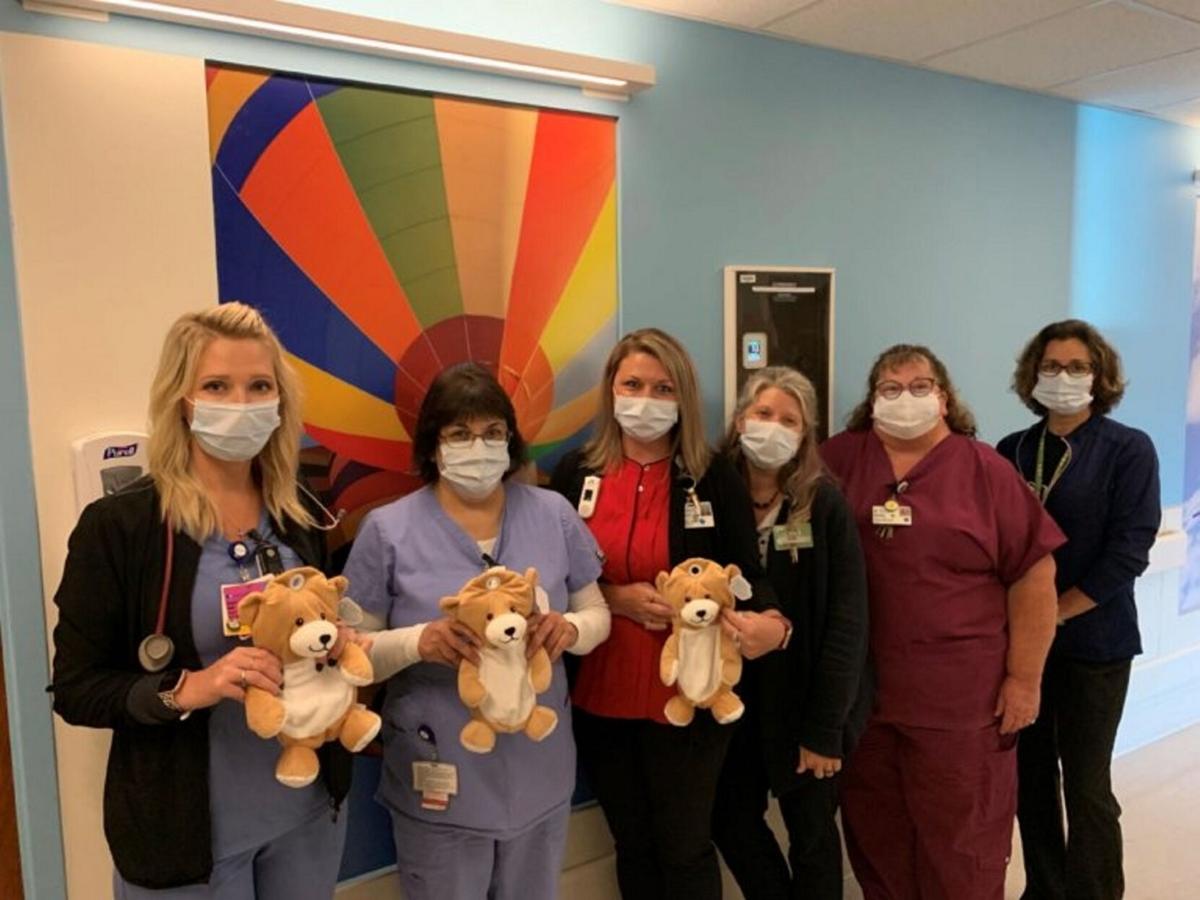 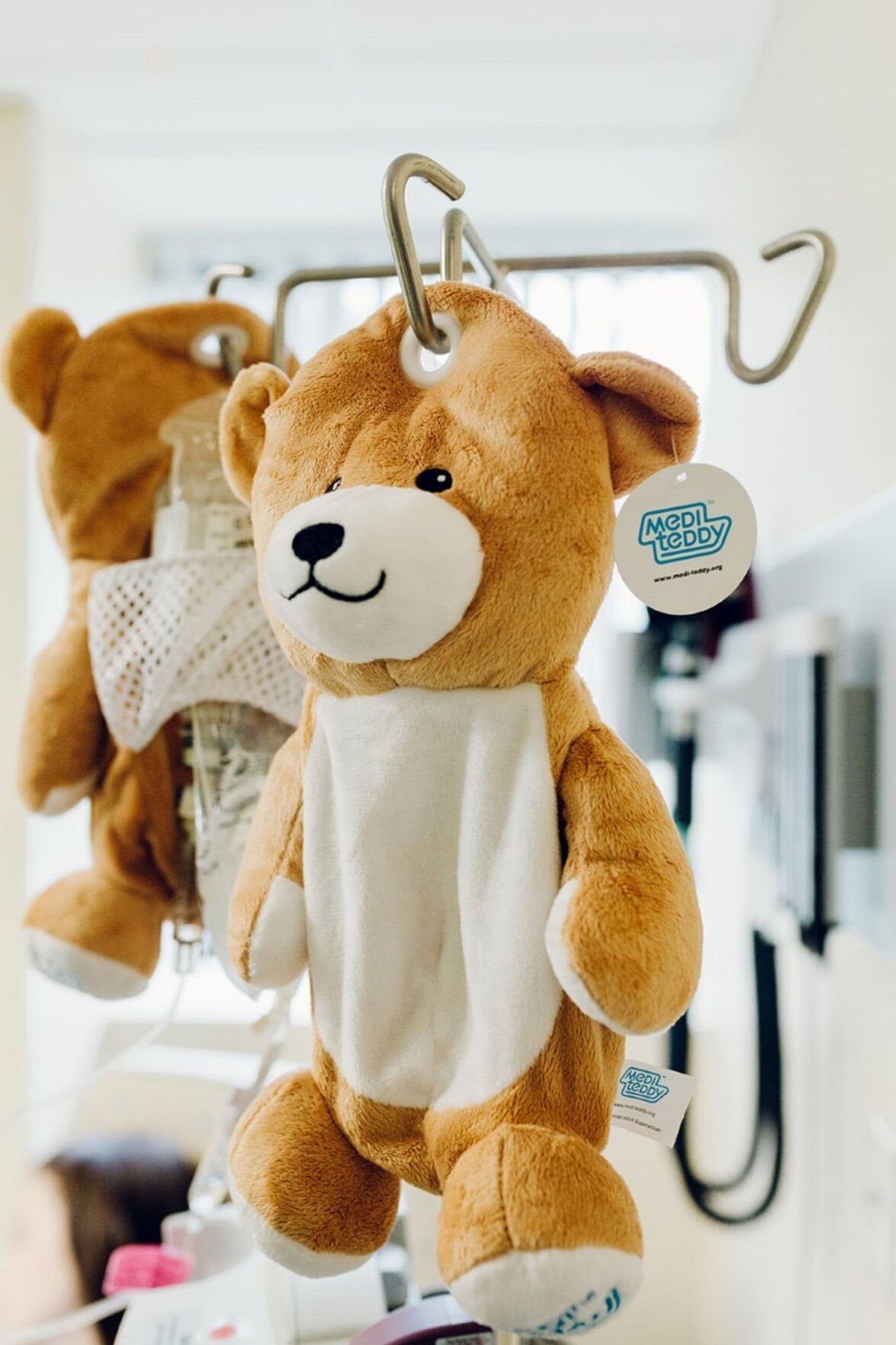 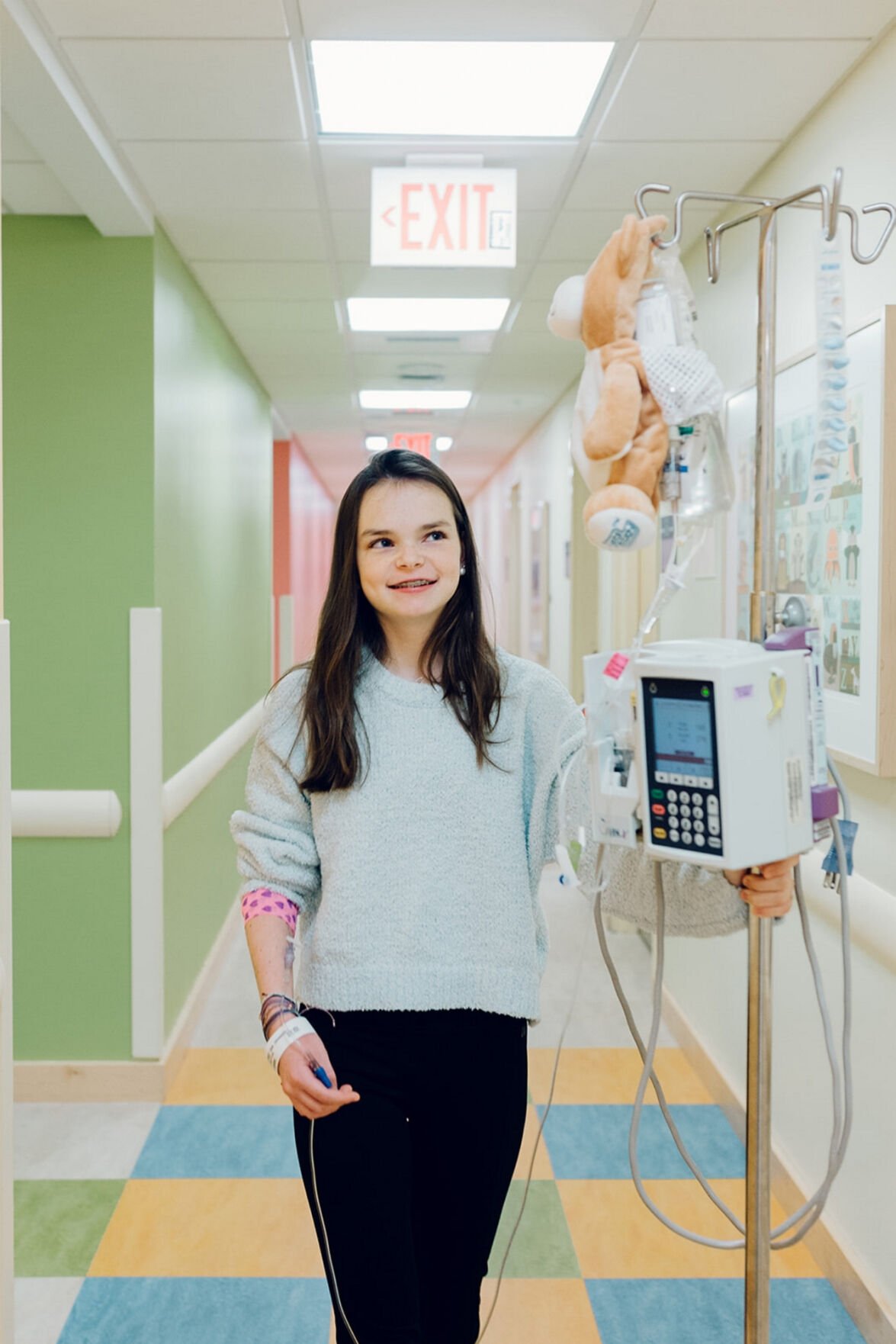 Ella K. Casano smiles alongside a Medi Teddy®, which she created for other young patients like herself to help ease nerves during hospital stays. Photo courtesy of Laura Barr Photography

Ella K. Casano smiles alongside a Medi Teddy®, which she created for other young patients like herself to help ease nerves during hospital stays. Photo courtesy of Laura Barr Photography

WATERTOWN — Hospital stays can be nerve-wracking experiences for even the most seasoned patients, let alone children. In an effort to better the stays of local children, the Samaritan Medical Center Foundation recently received a donation of 100 Medi Teddy® IV bag covers from Susan “Sue” Powers Washburn, formerly from Watertown.

Sue held a fundraiser for her 70th birthday and purchased the bears with the funds raised. The Medi Teddys were donated for use in child-centered areas of the hospital, including the Emergency Department, Pediatrics Unit and Surgical Services.

“When you bring that in and hang it up or introduce the child to the Medi Teddy, it just lights their eyes up,” said Laurie L. Fegley, director of the Car Freshener Center for Women and Children. “It’s very comforting to them and makes the scary part of the hospital a little bit less scary, and they get to bring it home with them so it’s kind of a win-win. It is a huge benefit for our little ones, we’re very grateful.”

She noted that many of the center’s little patients have benefited from the Medi Teddy and if more aren’t donated, she believes the hospital will look into purchasing more for the kids.

The Medi Teddys were created by Ella K. Casano of Connecticut. When she was just 7 years old, Ella was diagnosed with Idiopathic Thrombocytopenia Purpura, or ITP, which means her body destroys the platelets in her blood. The platelet count for the average person is generally between 150,000 and 450,000 platelets per microliter of circulating blood. For people with ITP, they often have platelet counts below 20,000. In Ella’s case, platelet counts go well below 10,000. Many kids grow out of it within a few months, but for Ella, now 15, it has never gone away, making her a rare case.

Every eight weeks, she spends the day at an outpatient clinic getting an infusion of IVIG, a medicine that helps increase the number of platelets in her body. After that, she has to take steroids for a week to help minimize the side effects of the IVIG.

With the support of her family, Ella made her first Medi Teddy prototype when she was in fifth grade, with manufacturing and first sendoffs coming a few years later in the summer of 2019 when she was 13 years old.

“From my own experiences with getting infusions, I know how scary and intimidating the look of all the medical can look, especially for pediatric IV patients, and that kind of stuck out to me especially at my first few infusions,” Ella said about the creation of Medi Teddy. “I just didn’t want other kids to have to go through the experiences that I had.”

Medi Teddy hides the bag of IV fluid, medication, or blood hanging from the IV pole, which can be scary for the child who is receiving it, and instead provides a fun and friendly face for the child to look at. The bears come in both plush and plastic versions. The cleverly designed Teddy bear covers the IV bag while still making it possible for medical staff to see the medication or blood products inside thanks to a mesh back.

Ella’s mother, Meghan “Meg” M. Casano, BSN, MA, of I.V. Comfort Solutions, the makers of Medi Teddy®, said the social worker at the hospital Ella goes to for infusions told her that sometimes parents are also afraid of the medicine and bags of blood, so they, too, are comforted by Medi Teddy.

“From going up there every summer, I’m just really glad that we were able to find a way to kind of give back to that community,” Ella said.

Though she no longer lives in Watertown, instead spending time in Boise, Idaho with family, Sue still has a house in Henderson Harbor and is friends with Ella’s grandparents.

A supporter of Ella, who she has known since she was young from summers in the harbor, and her effort with Medi Teddy, and having been born in the House of the Good Samaritan before it became Samaritan Medical Center, when her birthday came around in February Sue decided to do a Facebook fundraiser to bring Medi Teddy to Watertown.

“I just was blown away by my friends and family making contributions, we were able to raise a lot more money than I anticipated,” she said. “We raised slightly over $2,000 in a few hours. I was just blown away by people’s generosity. People who knew me as a child that saw it on Facebook, people I haven’t seen in seventy years, donated, so that’s what was really kind of cool about it.”

At last count, Meg said there were over 8,000 Medi Teddys in use by children in 23 countries. Thanks to Sue and her donation, Samaritan is among the top five recipient hospitals, which she said just goes to show what one person can do in their community.

Individual families can request a Medi Teddy for their child for free from https://www.medi-teddy.org/. As a 501(c)3 nonprofit, Medi Teddy relies on donations to help with those individual gifts and then for hospitals who want bulk ordering, it relies on people like Sue to help with some sort of fundraising, or sometimes hospitals will purchase them outright from the retail side at https://ivcomfortsolutions.com/.

“I think we all, especially with the pandemic and even before that, we feel helpless about a lot of things, but then you realize that one person can do so much, so for me to just do a simple ‘throw-it-out-there,’ I didn’t do much,” Sue said. “I just put the opportunity out there and people want to help, people want to contribute whatever they can, especially when it’s children that are being impacted. It just was the ability to do something that has a lasting impact.”