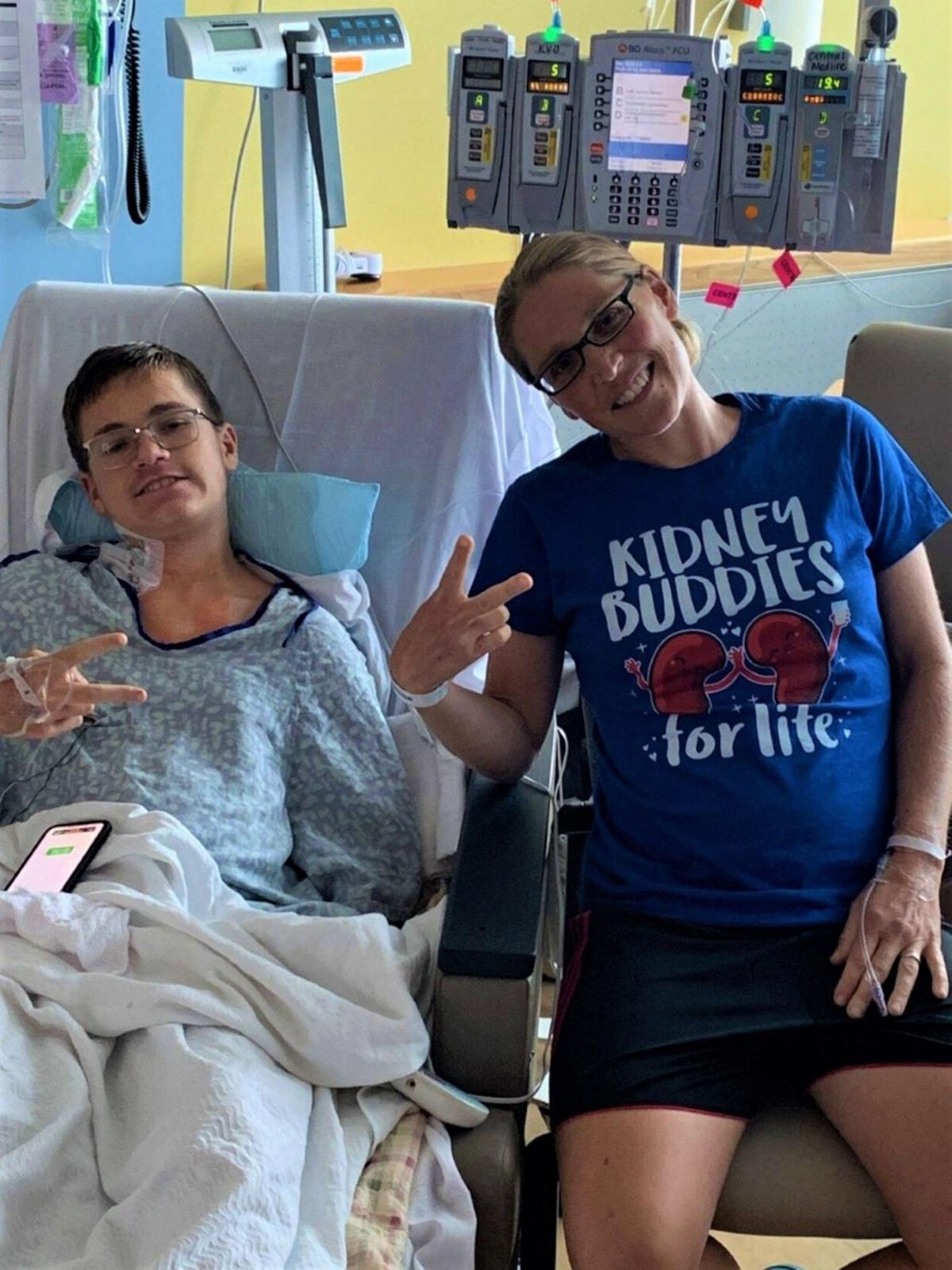 Andrew D. Carroll poses in front of a welcome home sign in Copenhagen, greeting him upon his return home after receiving a life-changing kidney transplant. Provided photo

Andrew D. Carroll poses in front of a welcome home sign in Copenhagen, greeting him upon his return home after receiving a life-changing kidney transplant. Provided photo

COPENHAGEN — Two weeks post-operation, Andrew D. Carroll said he’s feeling good after receiving a much needed kidney transplant, thanks to a selfless donation from his aunt.

Andrew, 15, was diagnosed with a rare kidney disease known as nephronophthisis the day before his 12th birthday. He was told in March he would need a kidney donor sooner rather than later, or risk being put on dialysis. Upon receiving the news, Andrew’s mother, Sue Tapke Carroll, took to Facebook to share his need of a living donor.

After a rigorous search, Andrew’s aunt, Denise J. Carroll, was found to be a match and donated one of her kidneys to her nephew on Sept. 1.

“The surgery was successful, everything went really well. They actually both got discharged a lot quicker than normal,” Sue Carroll said. “Denise was discharged after the second day and Andrew was discharged on the Saturday after. They both did so well (that) they broke out early.”

Denise Carroll’s surgery took about four hours, while Andrew’s lasted for about six. Both occurred at Upstate Medical University, Syracuse. Andrew said he’s not in any pain right now post-surgery and that recovery is a bit boring, so he’s been playing a lot of video games and watching TV.

According to Sue Carroll, those at the hospital said Andrew should try to exercise in order to help his recovery along. Currently, the only exercise Andrew can do is walking. So, alongside his mother, Andrew is going outside to walk as much as he can, doing laps around the house.

Sue Carroll also shared that Andrew is on a lot of medications post-surgery, such as immune suppressants that he’ll be on for the rest of his life, though he considers the trade-off worth it for a well-functioning kidney.

The Carroll family is hoping to hear from Andrew’s school about setting him up with a tutor this week to keep him on track with his school work. The plan is for Andrew to be tutored two hours a day until his twice-weekly visits to Syracuse for bloodwork and checkups decrease to once a week. Then they’ll begin online schooling.

According to Sue Carroll, the entire staff at Upstate Medical University, from the numerous surgeons, nurses and other staff members, were amazing and took great care of Andrew. As he recovers and looks toward the future, Andrew wishes to “thank everybody for their love and support.”

As for Denise Carroll’s recovery, she said she’s feeling quite good. Her friends have been coming over to play cards, she’s been relaxing and watching lots of movies.

“I’m just trying to take it easy because I don’t have any pain,” she said. “I know my insides need time to heal so that’s probably the hardest part, just knowing not to overdo it when you’re feeling really good.”

Pre-surgery, Denise Carroll was nervous, not so much for the actual procedure, but that something would go wrong and prevent or postpone the surgery. Now that the surgery’s over with — successfully — she said she would encourage anyone who’s thought about it to sign up to become a living organ donor. She noted that while she had an organ removed from her body, she feels no different than she did before the surgery. It’s amazing to know she saved her nephew from a lifetime of dialysis, she added.

“This has been such an amazing journey,” Denise Carroll said of her donation. “It’s just amazing to think how one day he was not feeling well and the next day he’s better all because my kidney works. He looks healthy and full of energy and it’s all been worth every minute of this journey; I have no regrets at all.”

During this period of recovery, family and friends have been checking in on Andrew, utilizing the Marco Polo app, which combines texting and video messaging. People are sending videos to make each other laugh and checking in to see how everyone’s doing.

The Carrolls have also been checking in on Denise Carroll, who currently lives in Rochester, just about every day.

“We can’t even begin to address how grateful we are for Denise being the living donor and giving Andrew a second lease on life,” Sue Carroll said. “The outpouring of support, before, during and even after the surgery, everybody’s still praying for him and hoping everything goes well. It’s been great. We can’t begin to thank everybody enough.”