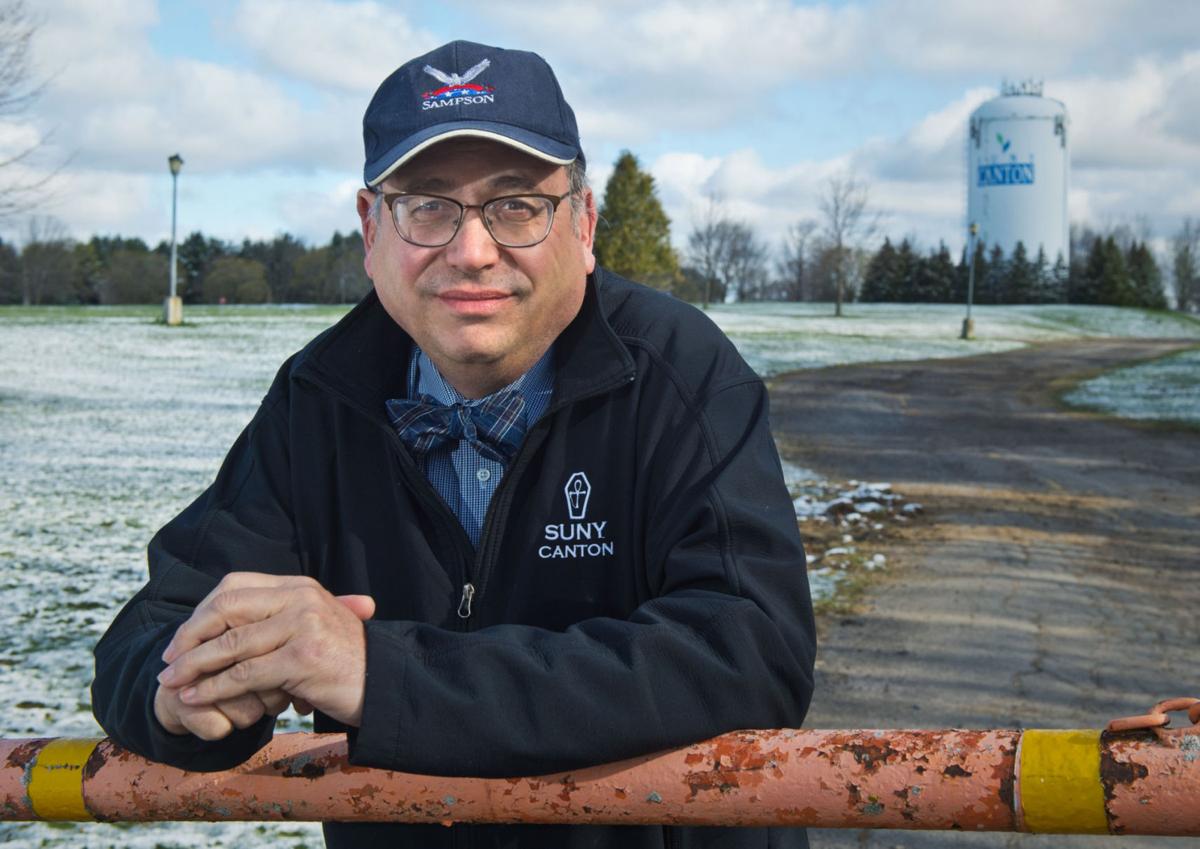 David Penepent, director of the funeral services administration program at SUNY Canton, says he has been blacklisted by trucking companies for transporting human remains from New York City to crematories. He’s now calling on the federal government to provide trucks so he can continue to help bring closure to grieving families. Christopher Lenney/Watertown Daily Times 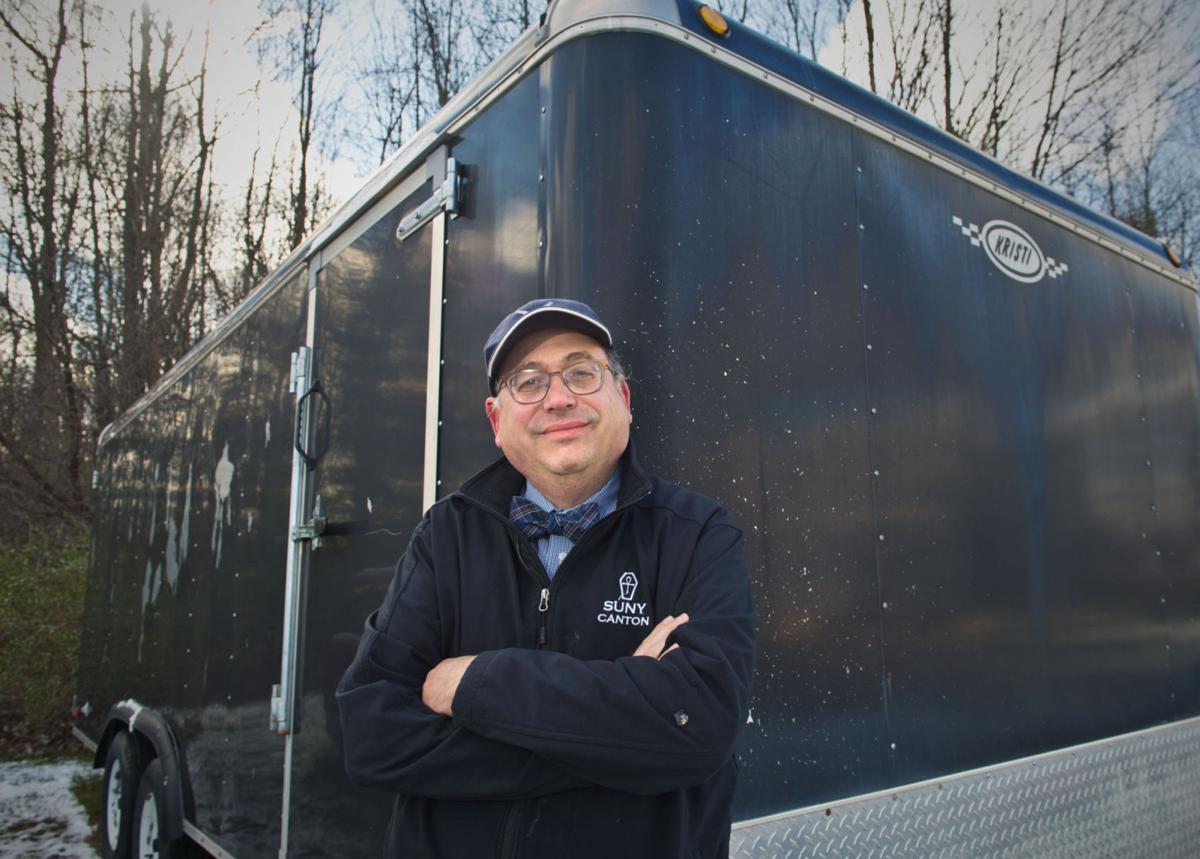 David Penepent, director of the funeral services administration program at SUNY Canton, says he has been blacklisted by trucking companies for transporting human remains from New York City to crematories. He’s now calling on the federal government to provide trucks so he can continue to help bring closure to grieving families. Christopher Lenney/Watertown Daily Times

CANTON — After about a month of coordinating the transport and cremation of over 700 New York City bodies, many of whom were decedents of COVID-19, David R. Penepent said his interstate operation has been temporarily trammeled.

“The issue is transportation,” Mr. Penepent, director of funeral services administration at SUNY Canton, said Friday. “If you don’t have a transportation line, you don’t have the means to get remains to their final resting place. As a result, my mission has been compromised.”

Mr. Penepent’s mission — assisting downstate funeral homes and backed-up crematories during the COVID-19 crisis — began in early April, with the SUNY Canton professor himself working in the field around New York City. In concert with Darien B. Frederick, funeral director at Watertown’s Cleveland Funeral Home, who has handled scheduling for the operation, cremation arrangements have been made at funeral homes and crematories across New York, as well as in Pennsylvania, Vermont and Connecticut.

Mr. Penepent said trucks were disinfected after each use, mitigating public health risk, but that he “respects the position” of the several rental truck companies he had tapped in the state.

“I get it, I understand their concern,” he said. “And the reality is, I was putting a Band-Aid on a gunshot wound.”

Two months since the novel coronavirus was first detected in New York on March 1, the state’s death toll has risen to 21,271 as of Saturday afternoon. And New York City’s 14,482 deaths account for 68 percent of the state’s total, according to the NYC Department of Health and Mental Hygiene, with downstate funeral homes and the handful of metro-area crematories still overwhelmed.

Of the 50 active crematories in New York, four are in Suffolk County, two are in Queens County, with one each in Bronx and Kings counties. Nearby Orange County has two crematories, and Westchester County has one. Cremation scheduling is backed up for months in some locations.

With relatively fewer cases of COVID-19 in the north country — a little over 300 total cases and fewer than 10 deaths confirmed in St. Lawrence, Jefferson, Lewis and Oswego counties as of this week — Mr. Penepent and funeral home directors stepped in last month, sending transport vehicles to the city to retrieve bodies and bring them upstate for disposition.

The state Department of Health issued the suspension after completing an investigation into the funeral home, and state Health Commissioner Howard A. Zucker calling the business’ actions “appalling” and “completely unacceptable.”

New York City sheriff’s deputies, working with health officials, launched an investigation of their own, and as of May 5, the Brooklyn Paper reports officials have found no criminality and said conditions have “vastly improved,” with the few remains still at the facility “properly accounted for.”

New York City’s entire last responder system, which involves funeral homes, hospital morgues, cemeteries and crematories, continues to be strained, with backlogs preventing the efficient burial or cremation of bodies. Mr. Cleckley told the New York Times he used the trucks as overflow storage after he had filled his chapel with more than 100 bodies, and that he could not purchase a refrigerated trailer due to shortages.

Mr. Penepent, who assisted with the removal of the bodies found in trucks outside Cleckley’s, said he “honors” the reality of the discovery because “it brings into focus a much larger story.”

“This problem is more than just Cleckley,” he said. “It’s the whole funeral and mortuary system that’s not equipped to deal with mass death like this.”

The New York Department of State’s Division of Cemeteries, which regulates mortuary operations, has temporarily eased some regulations to counter the surge in demand for death care services.

Through an April 9 executive order, Gov. Andrew M. Cuomo granted temporary approval for licensed, out-of-state funeral directors to work in New York, and the National Funeral Directors Association called for nationwide assistance from directors at the beginning of April. More than 100 funeral directors answered to serve in New York, and 115 students and apprentices reported to the New York City Office of Emergency Management to help hospitals ensure the respectful treatment of decedents until funeral home professionals arrive to facilitate transfers.

An additional relaxation of paperwork requirements, which was implemented April 30, has expedited the cremation approval process.

Cremation authorization forms require a specific crematory to be indicated as the place of cremation, and prior to April 30, that location could not be changed once the form had been signed by a family party and a funeral director.

Because of downstate backlogs, New York City families and funeral directors needed to complete new forms to indicate the use of a different crematory, which “takes more time,” Ms. Frederick said last month.

Now, funeral directors can cross out the previously indicated crematory and write in new information on the initial request form.

But even with those temporary approvals and alleviations, Mr. Penepent’s assistance network is hindered by a lack of resources.

His system, he said, worked well in April when he had access to rental trucks, but without access to transport vehicles, the network of available funeral home professionals and crematories falls apart.

If supplied with enough transport resources, Mr. Penepent estimates downstate overflow problems could be resolved in four to six weeks.

After reaching out to city Mayor Bill de Blasio and Rep. Elise M. Stefanik, urging them to advocate for federal assistance, Mr. Penepent said he’s hopeful he will soon be able to return to his work and help New York families whose collective sense of grief persists.

The New York State Funeral Directors Association and the Metropolitan Funeral Directors Association had partnered with Mr. Penepent and Ms. Frederick, and the New York State Tribute Foundation, a nonprofit of the NYSFDA, created a COVID-19 Disaster Relief Fund to cover the costs of upstate funeral directors assisting with downstate needs. Information about donating to the Tribute fund can be found on the foundation’s website.

Ideally, Mr. Penepent said, the Federal Emergency Management Agency will step in and provide trucks and refrigeration so assistance efforts can continue.

“The major resources have to come from a governmental level,” he said.