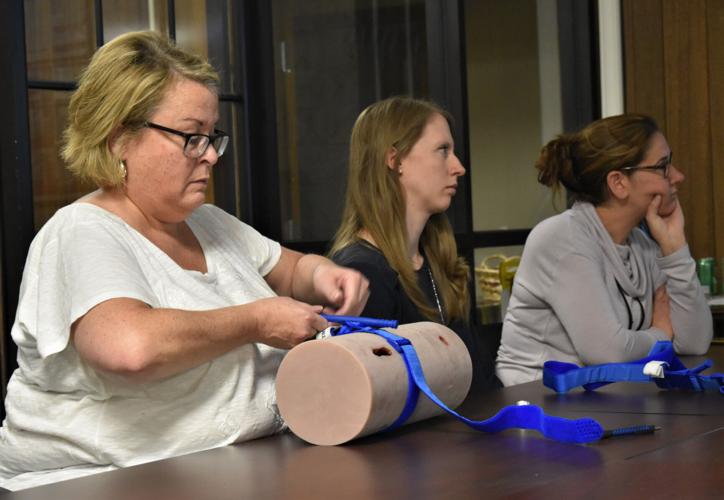 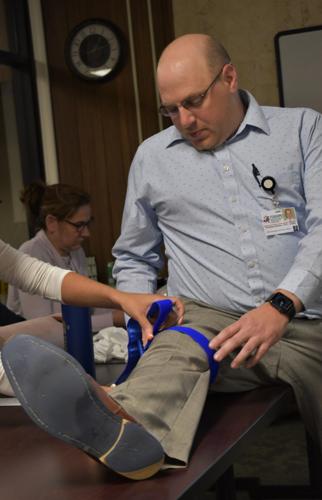 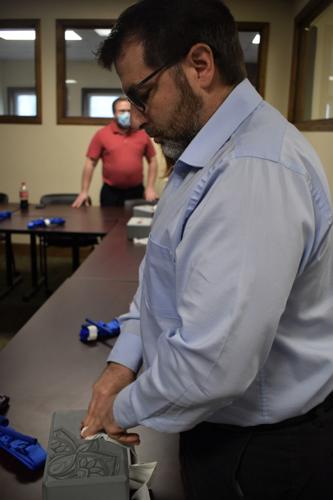 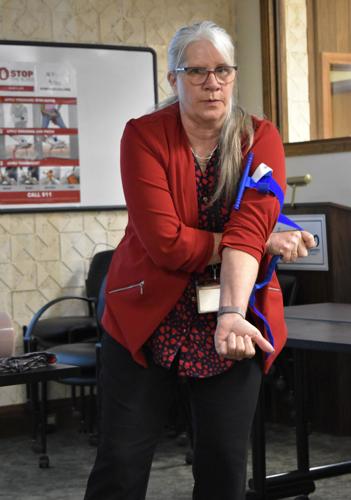 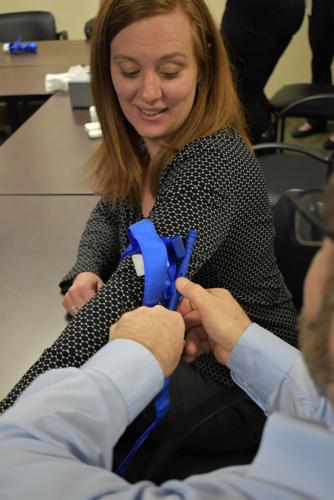 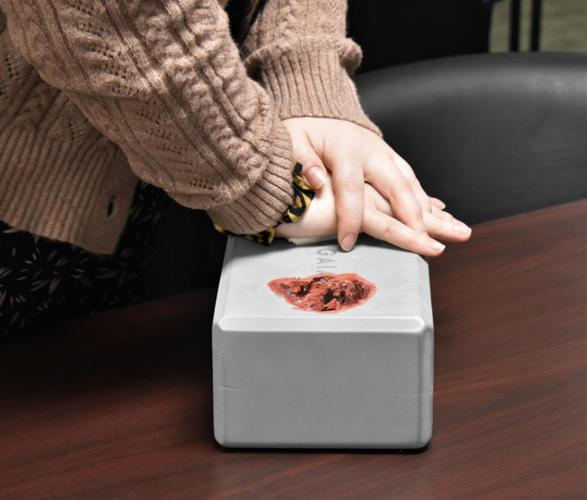 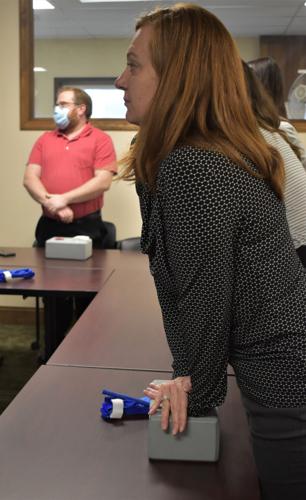 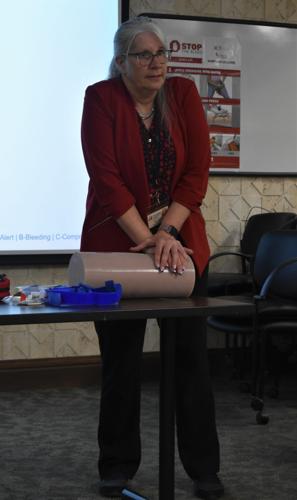 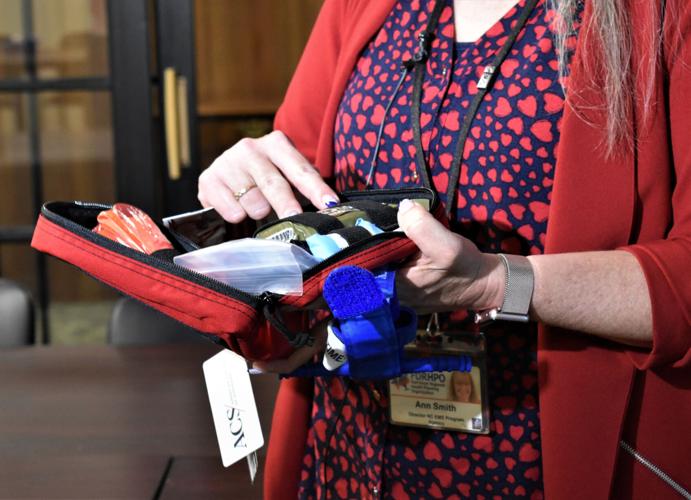 FDRHPO EMS Program Director and Stop the Bleed instructor Ann M. Smith shows the contents of one of 25 safety kits that will be dispersed into the community. Rachel Burt/Watertown Daily Times

FDRHPO EMS Program Director and Stop the Bleed instructor Ann M. Smith shows the contents of one of 25 safety kits that will be dispersed into the community. Rachel Burt/Watertown Daily Times

WATERTOWN — Thanks to a $4,100 LEAD Impact grant from the Northern New York Community Foundation and its LEAD Council, the Stop the Bleed initiative came to the north country Thursday, National Stop the Bleed Day, with the first training course held at the Fort Drum Regional Health Planning Organization’s offices at 120 Washington St.

Stop the Bleed is a national campaign created to better prepare the public to save lives by raising awareness of basic actions to stop life-threatening bleeding during an emergency. FDRHPO and its North Country EMS Program Agency brought Stop the Bleed training to the tri-county region to help provide public access to bleeding control kits and training simulations in anticipation of diverse response scenarios.

“As of today, they have trained over 2 million people nationally through this program,” said FDRHPO EMS Program Director and Stop the Bleed instructor Ann M. Smith. “That’s exciting because being able to stop bleeding can save a person’s life when they have a severe bleeding emergency.”

Uncontrolled bleeding is the No. 1 cause of preventable death from trauma. Just like with bystander CPR training to decrease mortality during cardiac arrest, Stop the Bleed can increase the odds of survival for people having severe bleeding emergencies.

Approximately 20 emergency responders in the region will be trained to become Stop the Bleed instructors who will then conduct at least 25 free training sessions in key community locations to empower civilians and other professional first responders to administer the Stop the Bleed technique, which includes procedures to apply pressure, pack wounds and apply tourniquets. According to Mrs. Smith, the goal is to train over 500 community members in the tri-county region.

“This could happen anywhere, so having the skills and being able to help before emergency services gets there can save somebody’s life,” Mrs. Smith said. “No matter where you are, and especially if you’re in the general public or a car accident, it’s important to think about your own safety, and make sure that you and the patient are in a safe place where somebody won’t get injured again.”

Mrs. Smith instructed participants to hold pressure on wounds until the bleeding stops or emergency help arrives. She stressed the importance of maintaining pressure, as removing pressure from a wound can disrupt clotting. For deeper wounds, when pressure doesn’t cut it, wound packing is the next step, filling the wound with ideally hemostatic gauze if available, but doing what you can with what is available. She noted that a tourniquet may actually be the first line of defense in some cases.

“I thought it was very informative,” said Pat A. Fontana, director of population health for FDRHPO, once training had been completed. “You hear of CPR quite often, but this is something that you don’t hear of that I think is just as important or more so.”

Mrs. Smith was joined in Thursday’s training session by Thomas M. Zecher, director of health information technology and assistant instructor, who has 20 years of experience with emergency services and was already a Stop the Bleed instructor. He notified participants that in performing the techniques taught during the session, they’d be covered under the Good Samaritan Law for rendering emergency aid with good intentions.

He said Stop the Bleed is important because it is something that is useful in the field with the right training.

“This is kind of one of those last major things you can actually do in the field,” he said. “You don’t have to have medical training. You can do this in the field and you can literally save a life — this is something that anybody can do. I think it’s a great opportunity in this community to get this out there to get people trained.”

Participants learned the ABCs of stopping bleeds Thursday, with instructions like alerting emergency services by dialing 911 and knowing your location so they can easily locate you and the patient, finding the source of the bleeding, and compressing the wound, applying pressure as needed. The partnership with the LEAD Council and the Northern New York Community Foundation will also be providing Stop the Bleed kits in 25 different locations throughout the tri-county area. Kits include a tourniquet, gauze, rubber gloves, literature and a marker to write down the time the tourniquet was put on. At the moment, it is still unknown where the kits will end up.

The Stop the Bleed initiative was developed out of a lesson learned from the Sandy Hook Elementary School mass shooting in December 2012 in Newtown, Connecticut. Many of the injuries at Sandy Hook weren’t mortal, but because of the situation, emergency medical services couldn’t intervene in time. This lesson hit even closer to home Thursday following Saturday’s mass shooting at the Tops Friendly Markets store in Buffalo, where a 10 people were killed in a shooting massacre.

“Recognizing that many of those children actually bled to death and had folks had these resources and knowledge, perhaps some of those individuals could have been saved,” said Erika F. Flint, FDRHPO executive director, who participated in Thursday’s training. “It shows how imperative it is for each of us as community members to be appreciative of the opportunity to partake.”

Those interested in having a Stop the Bleed course held at their organization can contact the FDRHPO office at 315-755-2020 ext. 52. For more information about Stop the Bleed, visit www.stopthebleed.org.