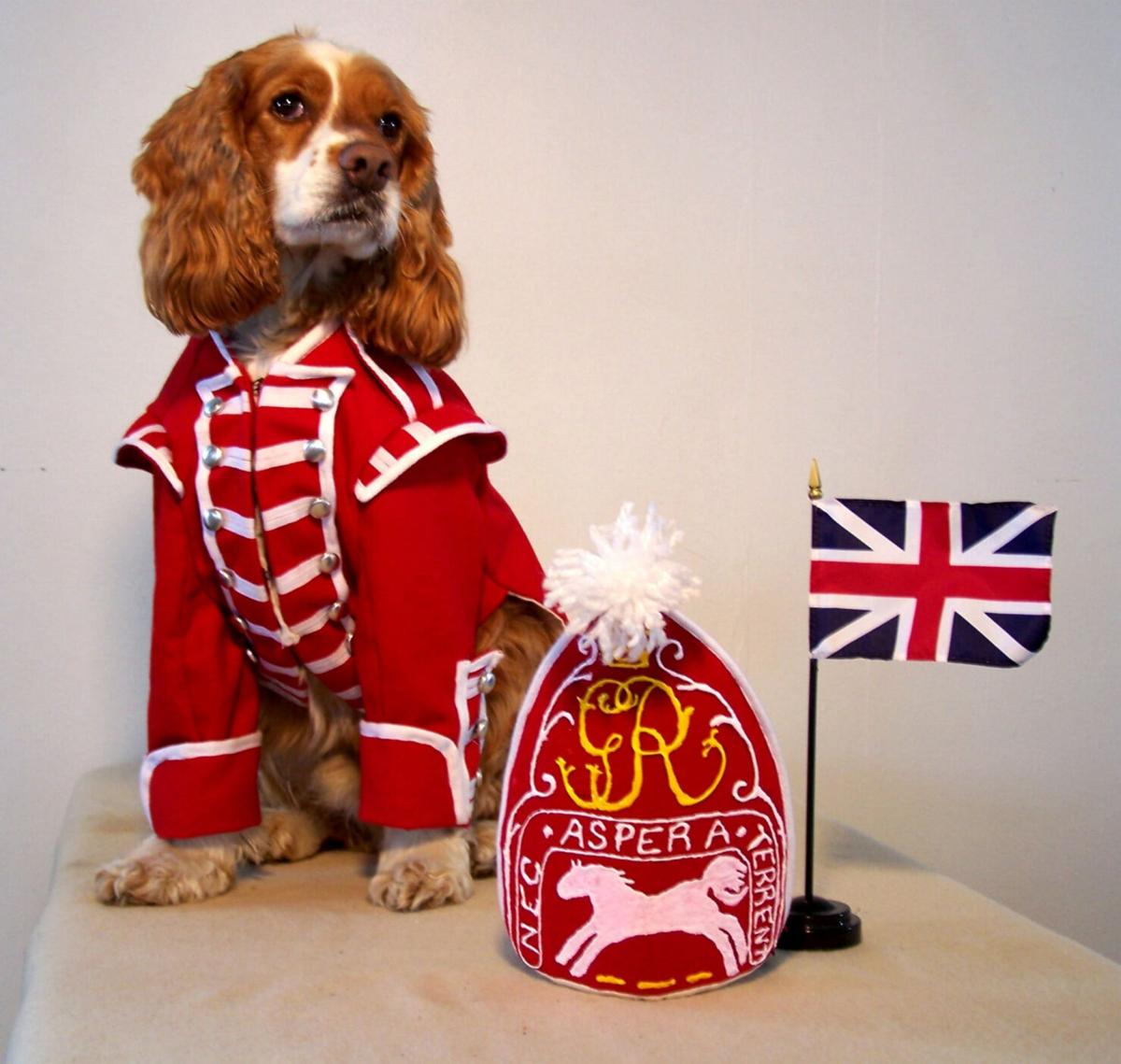 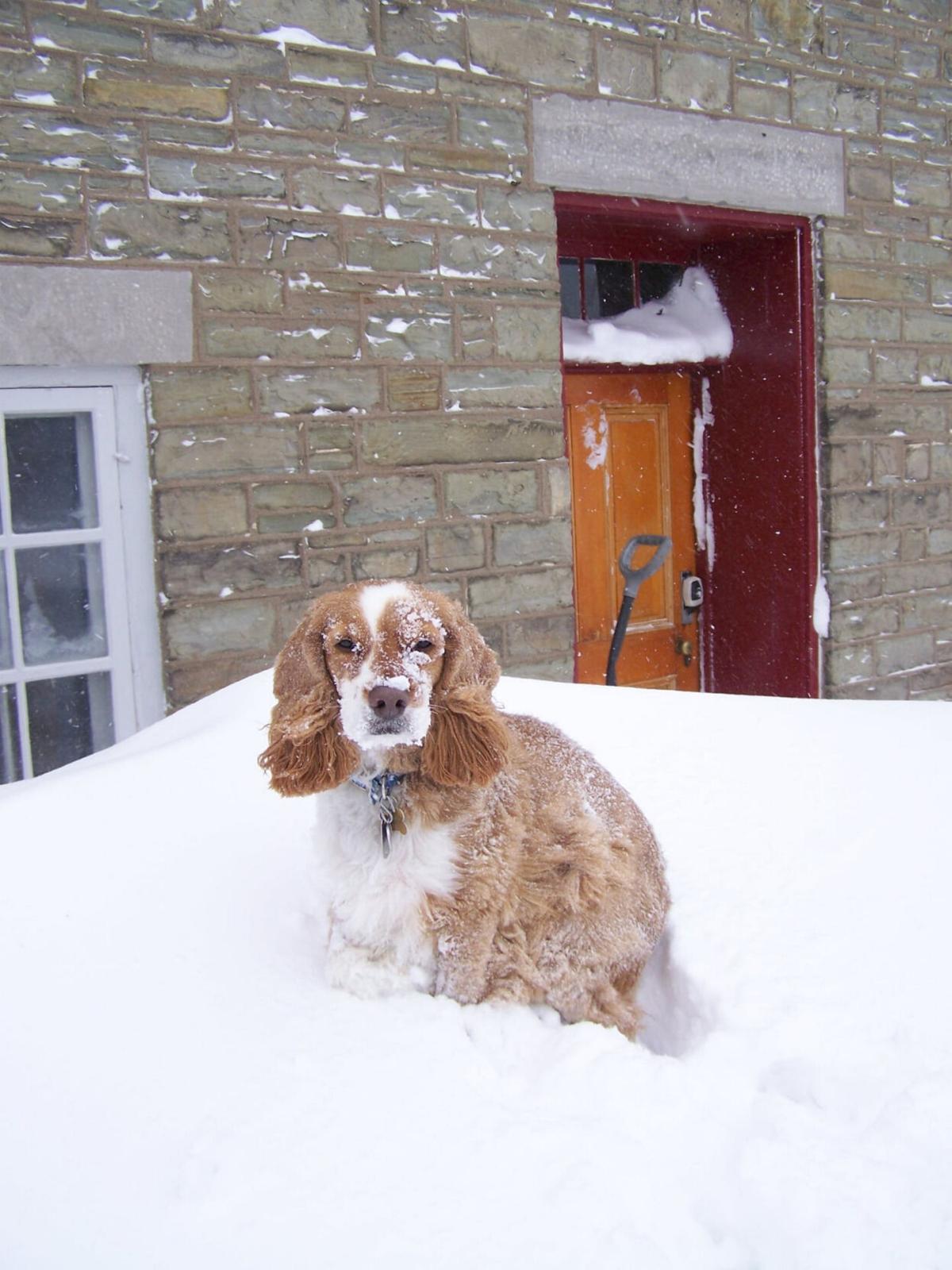 Browny plays in the snow at the fort. Photo from Gen Brown’s Facebook page. 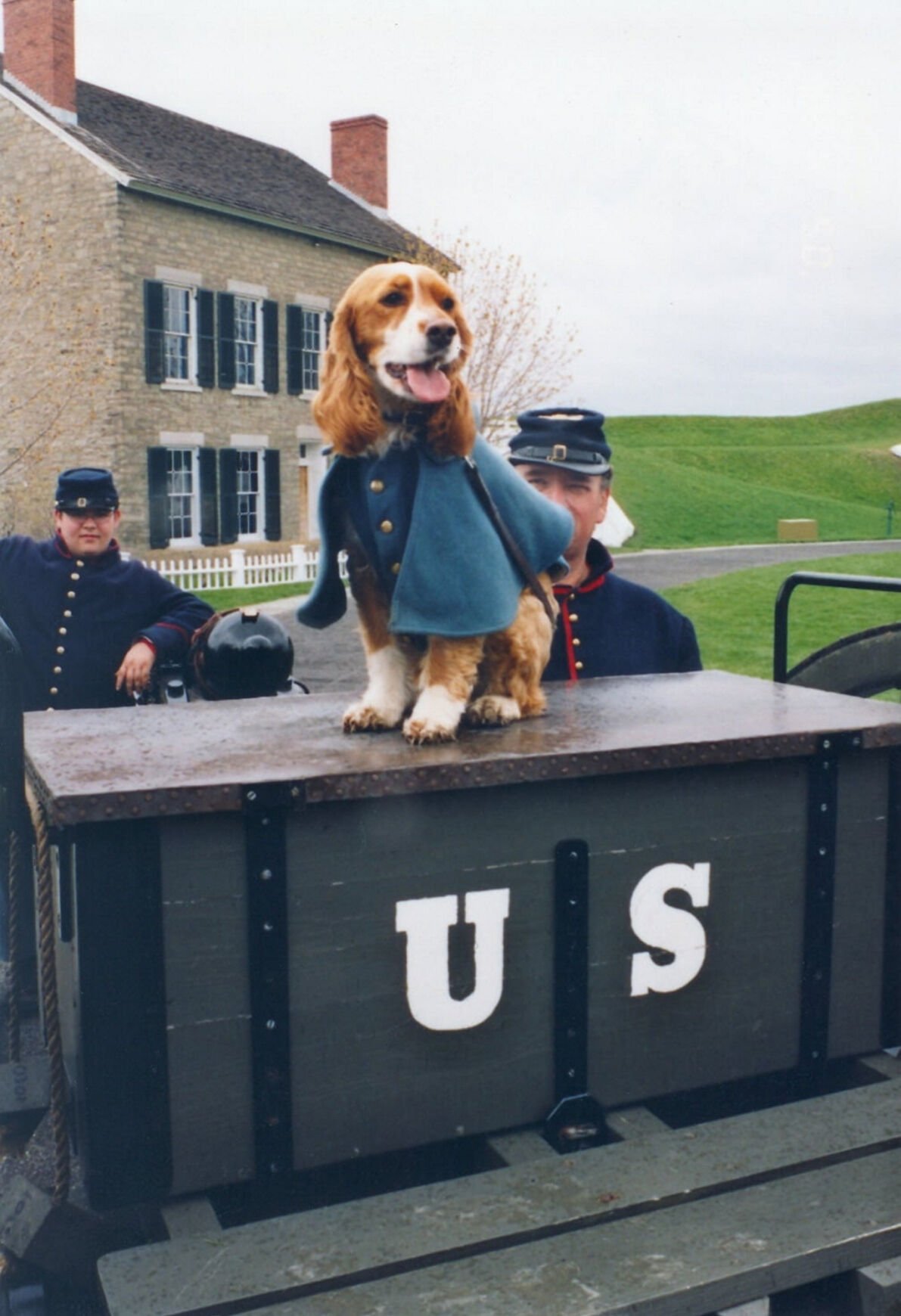 Browny poses at the fort in his Civil War overcoat. Photo from Gen Brown’s Facebook page. 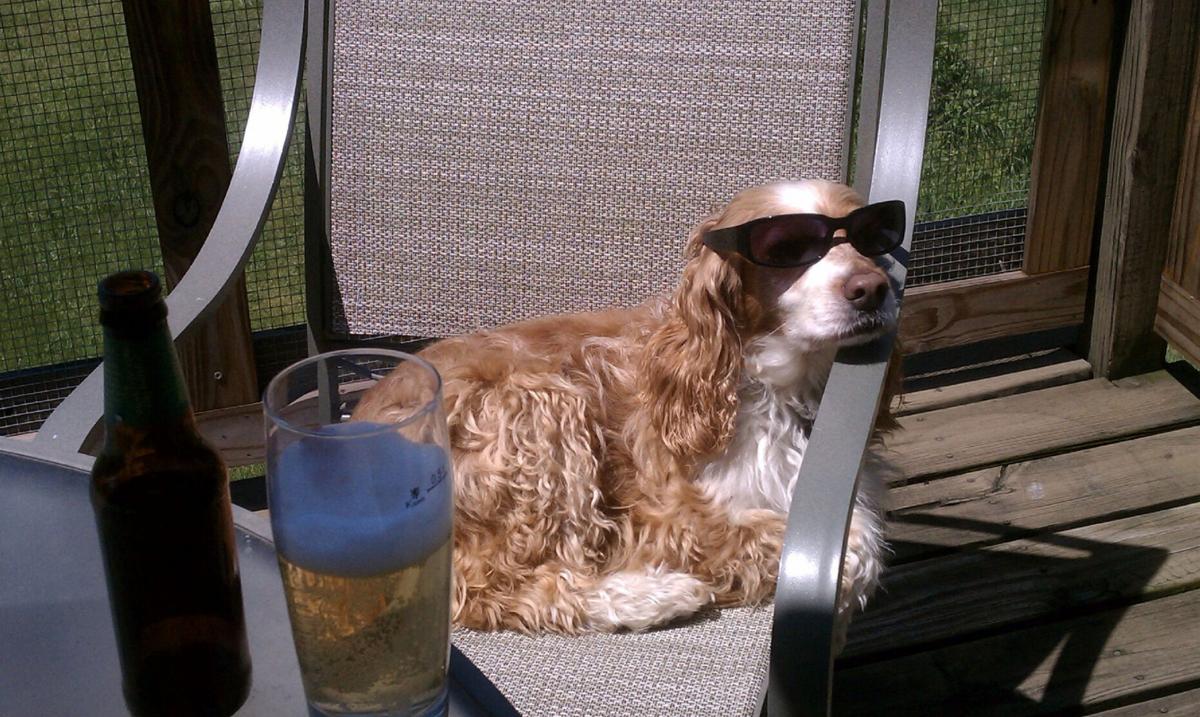 Browny in retirement at the Lear homestead. Photo from Gen Brown’s Facebook page. 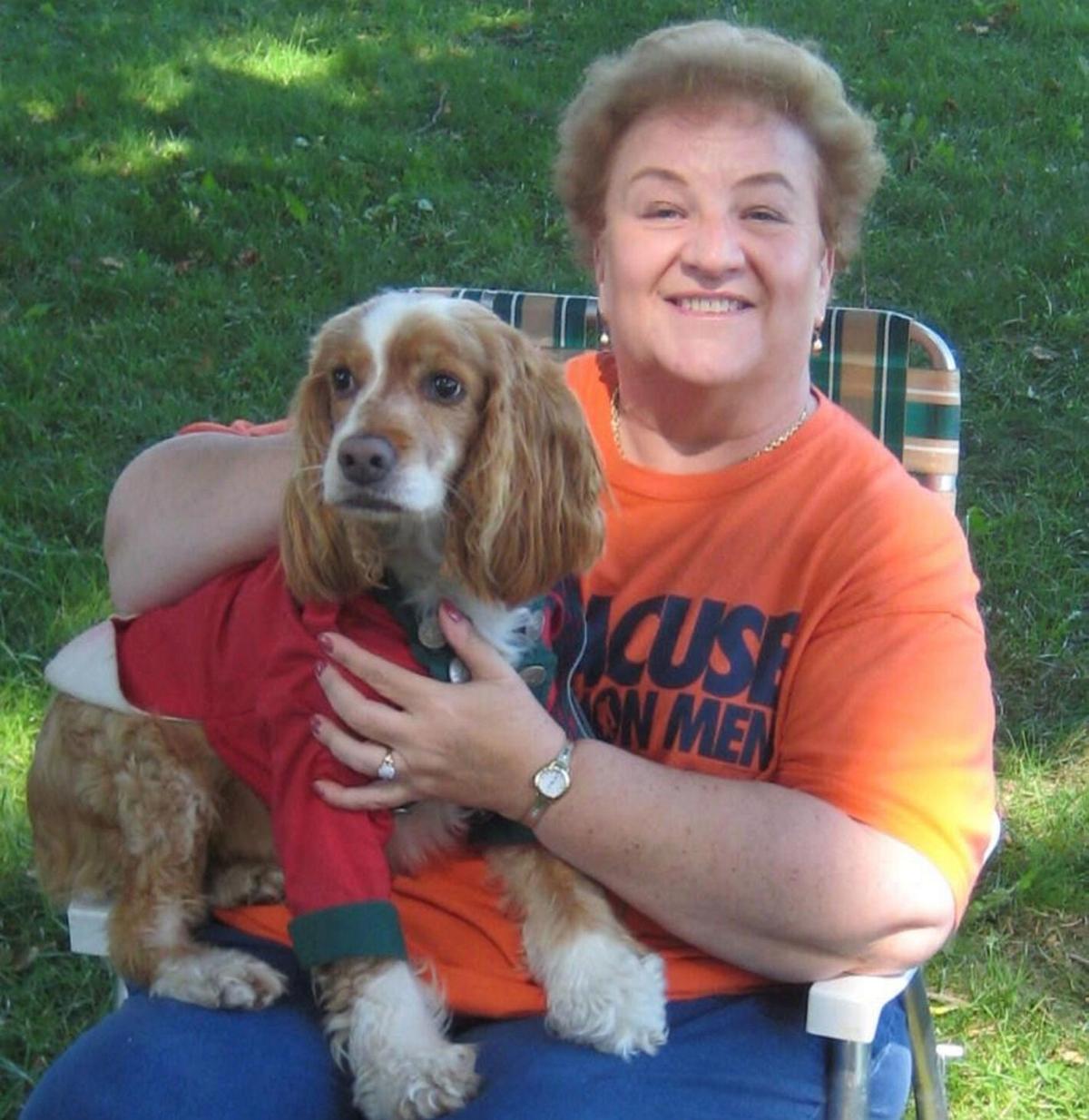 Browny poses with the author of this story during a kite-flying event at Fort Ontario a number of years ago. Photo courtesy of Debra J. Groom.

Browny plays in the snow at the fort. Photo from Gen Brown’s Facebook page.

Browny poses at the fort in his Civil War overcoat. Photo from Gen Brown’s Facebook page.

Browny in retirement at the Lear homestead. Photo from Gen Brown’s Facebook page.

Browny poses with the author of this story during a kite-flying event at Fort Ontario a number of years ago. Photo courtesy of Debra J. Groom.

Cute, lively, loyal to a fault. He loved people, he loved chasing critters and he loved treats.

And at times, he loved the limelight.

Gen. Jacob Brown, the long-time mascot, attraction and ambassador at Fort Ontario State Historic Site, died Dec. 1 at the age of 17. Browny, as he was known to family and friends, was owned by Paul Lear, site manager at the fort, and Amy Stone Lear, who owns and operates Man in the Moon Candies in downtown Oswego.

In his long life, Browny became a celebrity of sorts, known to thousands of people. Paul Lear said once that he received clips of newspaper articles from across the country every time Browny graced their pages.

There he was, standing guard at Fort Ontario. There he was, trying his best to upstage U.S. Sen. Charles Schumer.

There he was, posing for a poster to help keep the fort open during trying state budget times. There he was, chasing varmints like squirrels and woodchucks out of the fort.

“His kidneys started to fail about two years ago,” Paul Lear said. He said Browny would be feeling poorly for a while, but then would pep back up like his younger self.

“He was with Amy the week before he went and was outside dancing up a storm,” Lear said.

What Browny was most known for in the Oswego area was his work at Fort Ontario. Every morning, Lear would say “let’s go to work” and Browny would run to the door to get ready for the ride to the fort.

“His main job is chasing woodchucks out of here,” Lear said in an earlier interview. He worked at the fort from the time he was a mere pup of four months old until May 2012 when poor eyesight forced him into retirement.

While working the fort, Browny also greeted guests, posed for photographs (one of his most favorite things to do) and palled around with Lear and other fort employees. He also made appearances at special events.

One year, Gen. Brown raised money for the Oswego County Historical Society by working the kissing booth. But Lear said the booth closed abruptly when Browny kept jumping out to join a family picnicking nearby with fried chicken.

Lear also tells a story about Gen. Brown running away from the fort over to the Oswego Little League fields. A woman at the fields found him and called Lear.

“I asked her what he was doing and she said he was in line at the Little League snack bar,” Lear joked.

Lear said Browny also was known to belt out a tune with area singers – whether they wanted him to or not. He would either bark or occasionally howl along with the singers as they tried to entertain.

Browny also was quite the military educator. Lear, a military historian, named the canine for Gen. Jacob Brown, who was from the Sackets Harbor area, a major general in the Army during the War of 1812 and First Commanding General of the U.S. Army in 1821. The village of Brownville and the General Brown school district are named for him.

During appearances and special events, Gen. Brown often was wearing one of his many military uniforms, made for him by former fort curatorial assistant Jennifer Emmons. He had uniforms from the French and Indian War, Revolutionary War, War of 1812, Civil War and World War I and a World War II leather bomber’s jacket complete with white silk scarf.

He also had his own tuxedo that he wore when his people (Paul and Amy) were married and a Mets uniform (he was not a Yankees fan).

He has posed with the likes of Schumer, numerous historians, children, fort guests and anyone else who wanted to rub shoulders with the fort’s Number One celebrity.

Lear said since Browny’s retirement, he has been taking lots of walks, sleeping in the chair and going hunting with Lear. Browny loves to hunt and finds lots of game for Lear. But he sometimes had to look back at Lear who didn’t run quite as fast the sprightly cocker spaniel-poodle mix. Lear said he would look at him as if to say “c’mon, catch up.”

And while Browny loved hunting with Lear, he wasn’t much of a retriever when Lear would bag a turkey or grouse or some other animal.

“He hated the sound of the gun,” Lear said. “But he lived to hunt and mostly, he hunted for himself. We had fun.”

When COVID-19 hit last March, Lear spent more time at home and he said he and Browny spent lots of time together. Lear is happy for this, knowing now that this was Browny’s last year.

“We would hang out and work together and we got out and walked like crazy,” Lear said.

Lear often talks about the history of dogs at Fort Ontario – telling tales of dogs living at the fort through its long history and even up through the times when the Jewish refugees lived there during World War II. He considers Gen. Brown one of those dogs in the history of Fort Ontario.

To see other photos of Browny, go to his Facebook page. Go to Facebook and search for gjacobbrown.