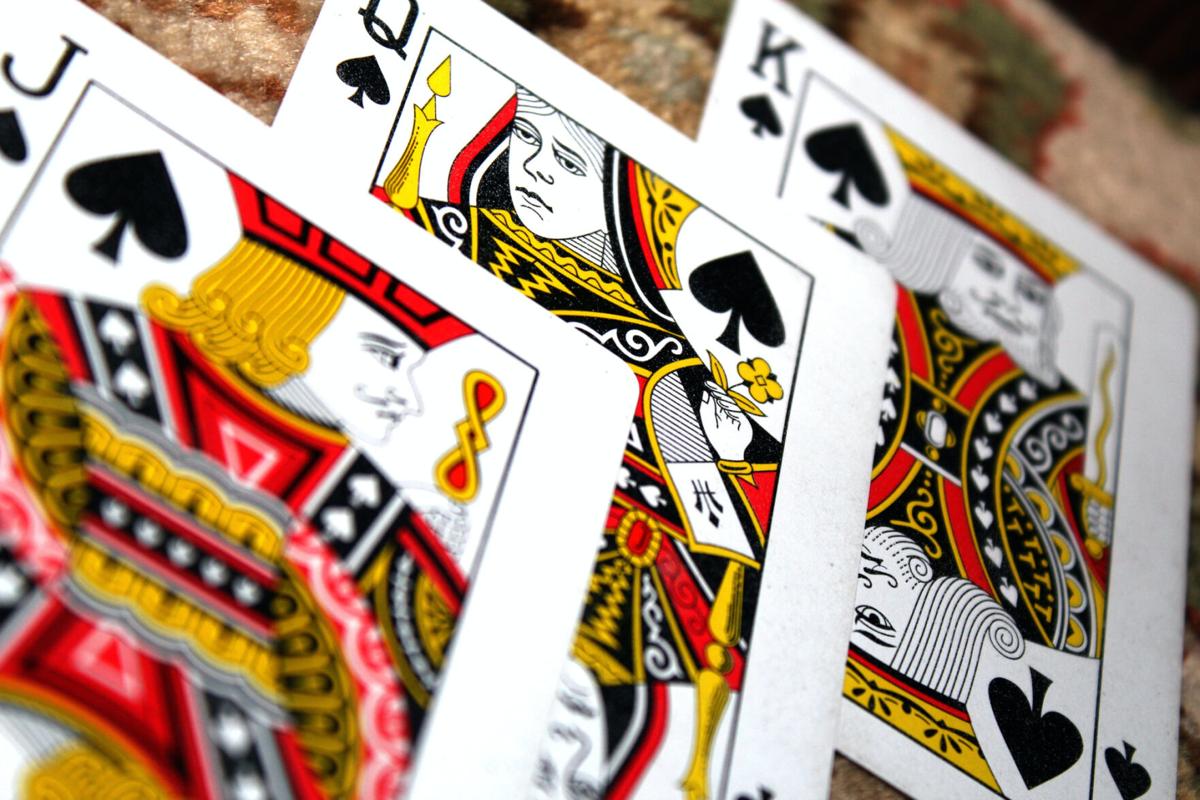 You don’t need an entire closet of board games or specialty cards to have hundreds of games at hand. Pexels 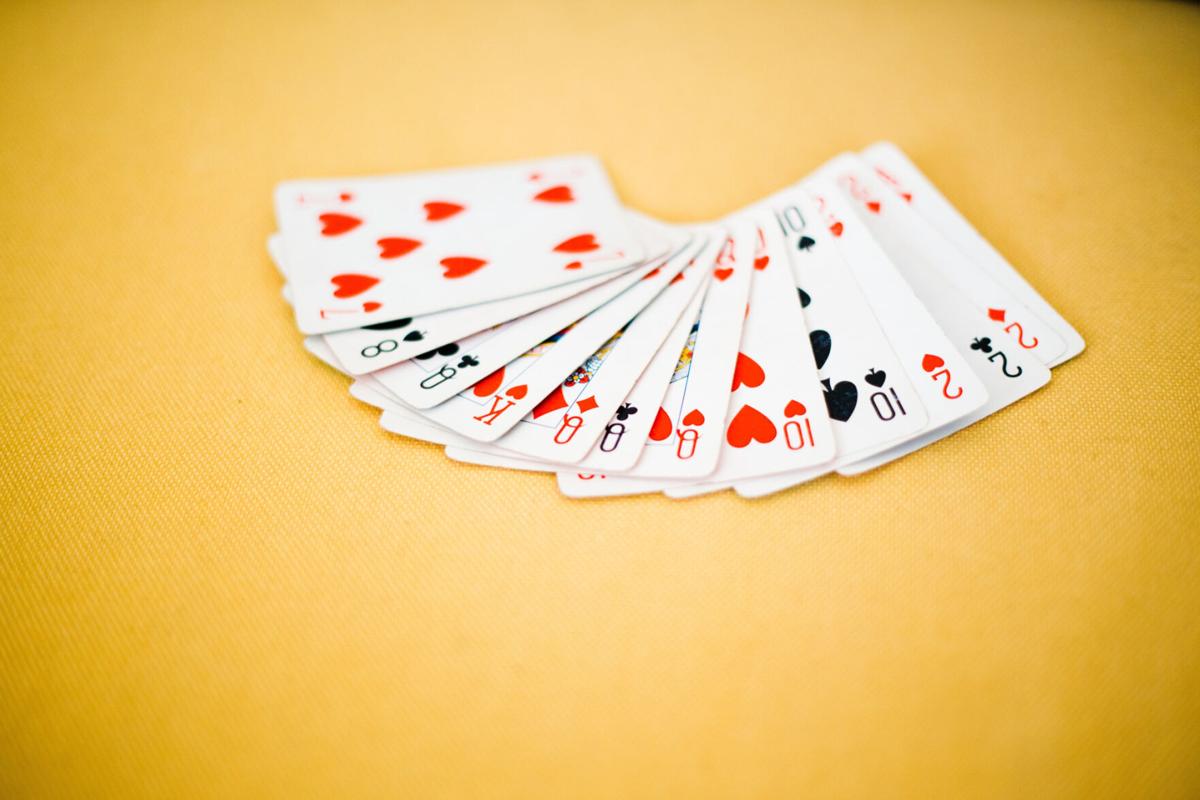 Playing cards have been played and passed around dating back to ninth century China. The most common style of playing cards today are the French-suited 52-card deck, which contains suits of hearts, clubs, spades and diamonds that are numbered from 2 to 10 and from Jack, Queen, King to Ace. Pexels 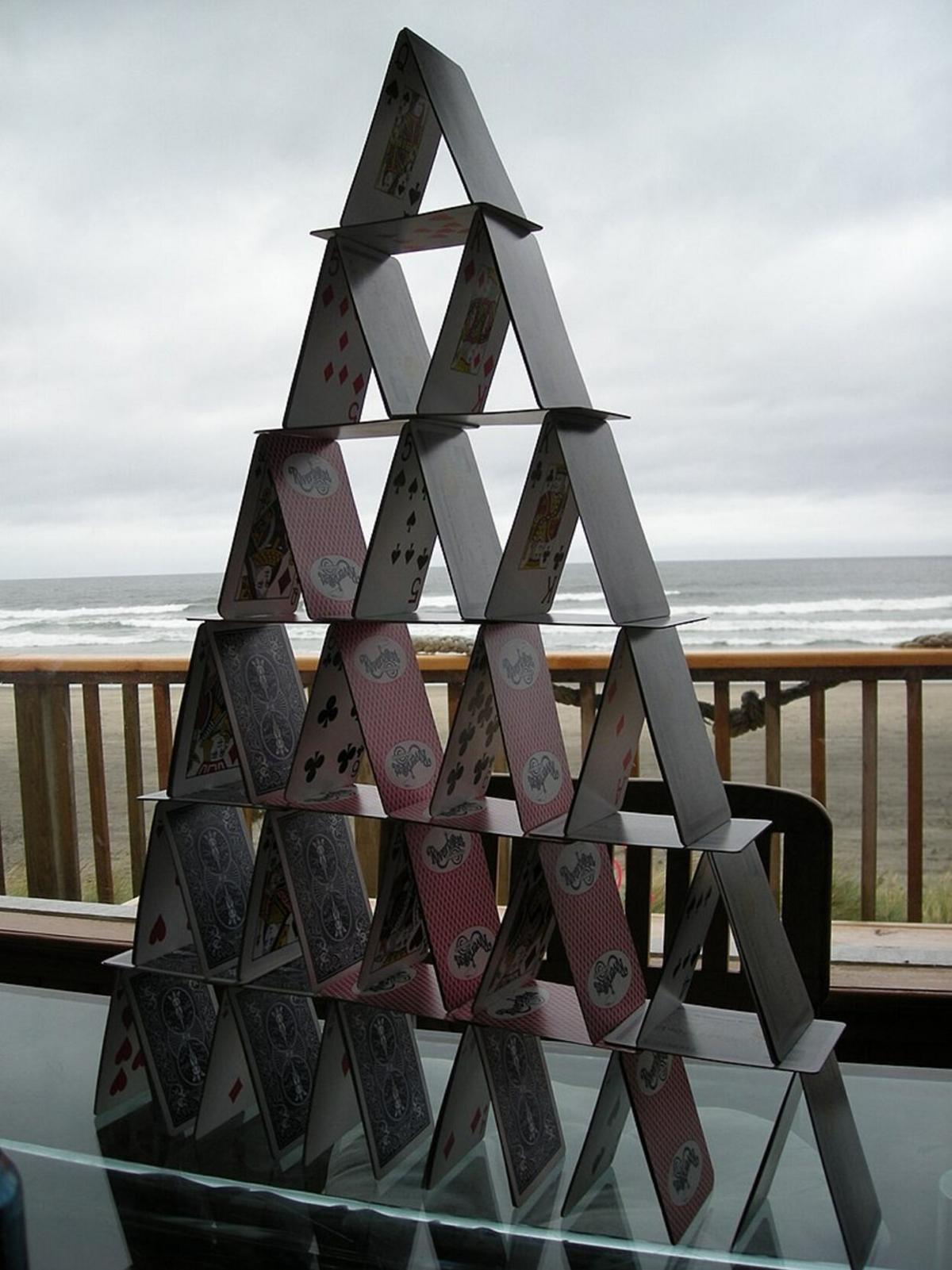 Six stories of cards are balanced in a pyramid. Wikipedia

You don’t need an entire closet of board games or specialty cards to have hundreds of games at hand. Pexels

Playing cards have been played and passed around dating back to ninth century China. The most common style of playing cards today are the French-suited 52-card deck, which contains suits of hearts, clubs, spades and diamonds that are numbered from 2 to 10 and from Jack, Queen, King to Ace. Pexels

Six stories of cards are balanced in a pyramid. Wikipedia

During COVID-19, a lot of families have been spending a lot more time together, and probably looking for things to keep everyone entertained. However, this isn’t the only time in history when people needed fun ways to help pass the time.

For hundreds of years, dating back to ninth century China, people have used a simple deck of cards to have fun playing almost any kind of game you can image.

You can play games all by yourself or in a large group. You can play on teams or on your own against another player or many players. There are games for younger kids and for teens, games of chance and games of skill. People even use cards to create the illusion of magic

And the best part is you don’t need an entire closet of boardgames or specialty cards. There are hundreds of ways to have fun in just a single, inexpensive deck of playing cards.

To get you started, here are four card games to keep you entertained throughout the year. Some of them may be new, and some may be familiar games you may not have known you can play without a special deck. No jokers are used in the games listed here.

Setup: Remove all the twos and sixes in the deck. You won’t be playing with a full deck in this game. Deal all cards facedown into two rows of four stacks of cards. You will have eight stacks of cards. Turn over the top card in each pile.

Goal: The goal is to clear all the piles of cards by clearing matching pairs. If you can’t match any pairs, you lose and the game is over.

Game play: Look for any matching pairs of cards. If two Kings are showing, for example, remove them from the game and turn over each of the the cards underneath.

Continue until all the cards have been removed, or until there are no more pairs of cards that can be removed.

Goal: Get the most “books” of four-of-a-kind matches based on the the card number. Suits are not important in this game.

Game play: On a player’s turn, they can ask any opponent for a card. (Example: “Mom, do you have any Kings?”) If the opponent has the card requested, they must hand it over, and the player gets to ask for another card from the same opponent — either the same card or a different one. (Example: “Mom, do you have any more Kings?”) When there are none of the requested cards, the opponent tells the player to “go fish,” or to draw from the top of the pile of cards.

Unless the player draws the exact card he or she asked for, it is the next person’s turn. However, if the player draws the same card they asked for (a King in this example), they must show it to everyone, and then continue their turn. (Example: “I got a King! So Mom, do you have any fours?”)

When a player collects four of a kind, they place them down face up, and those cards cannot be taken from them.

The game ends when all cards have been collected into books or when the draw pile is empty. The player with the most books wins the game.

For more games for two or more players, visit wdt.me/2player.

Setup: You need one fewer spoon than the number of people playing (for three players, you’ll need two spoons) in addition to a standard deck of cards.

Arrange all spoons in the center of the game and deal each player four cards. The dealer keeps the remainder of the cards facedown in a draw pile.

Game play: Only five cards are allowed in a player’s hand at a time. The dealer draws a card from the draw pile and chooses to either discard it and pass it to the next player or to keep it and discard another card from their hand.

The next player picks up the discarded card and decides to keep it and discard another card or to pass it along to the next player and so on. Everyone continues in this way, playing at the same time in search of a fourway match.

At no time may a player have more than five cards in their hand.

When a player gets a fourway match, they grab a spoon from the center. At that point, anyone without a match may grab a spoon. One player will be left out as there is one fewer spoon than players.

The game may continue without this player until all but two players are left in the game. In the two player game, there is only one spoon and the first player with the a four-of-a-kind match that grabs the spoon first wins the game.

In an alternate version, players who lose get a letter. The game continues all all players until one player loses five times to spell out the word S-P-O-O-N and the game is over. Whoever has the fewest letters at the end of the game wins.

Tip: Whoever is first to grab a spoon may choose to do so as quietly as possible to see how long it takes other players to notice they should stop searching for matches and grab a spoon.

Goal: The object of the game is to get 100 points. Cards from Ace to 10 are worth the value of their number, with Aces counting as one; face cards Jack, Queen and King are worth 10 points.

During the game, players try to group the 10 cards in their hand to make a combination in three ways.

First, the player may have three cards of the same rank (example: three Kings, three 9s and three 4s). The second way is to have a run of cards in the same suit (example: 2, 3, 4, 5, 6, 7, 8, 9, 10 and Jack — all in hearts). Third, players may also have a combination of these, with at least three in a match of cards or at least four in a run of cards. The same card cannont be part of a match and a run at the same time.

When a player groups all cards into matches or runs, they announce “gin” and all players lay down their cards. The unmatched cards from opponents are counted and added to the winner’s total score. (Example, four 2s and a run of four cards with a King and a 3 left over in a hand, would total 10 plus 3 from the leftover cards, earning 13 points for the winner.) The player who went “gin” also earns 20 bonus points.

The game continues with a new hand until one player earns more than 100 points.

This is a short list of games you can play. To find many more playing card games, visit bicyclecards.com/rules. If you prefer to watching gameplay over reading rules, visit wdt.me/cardgames to view videos of how to play popular card game.