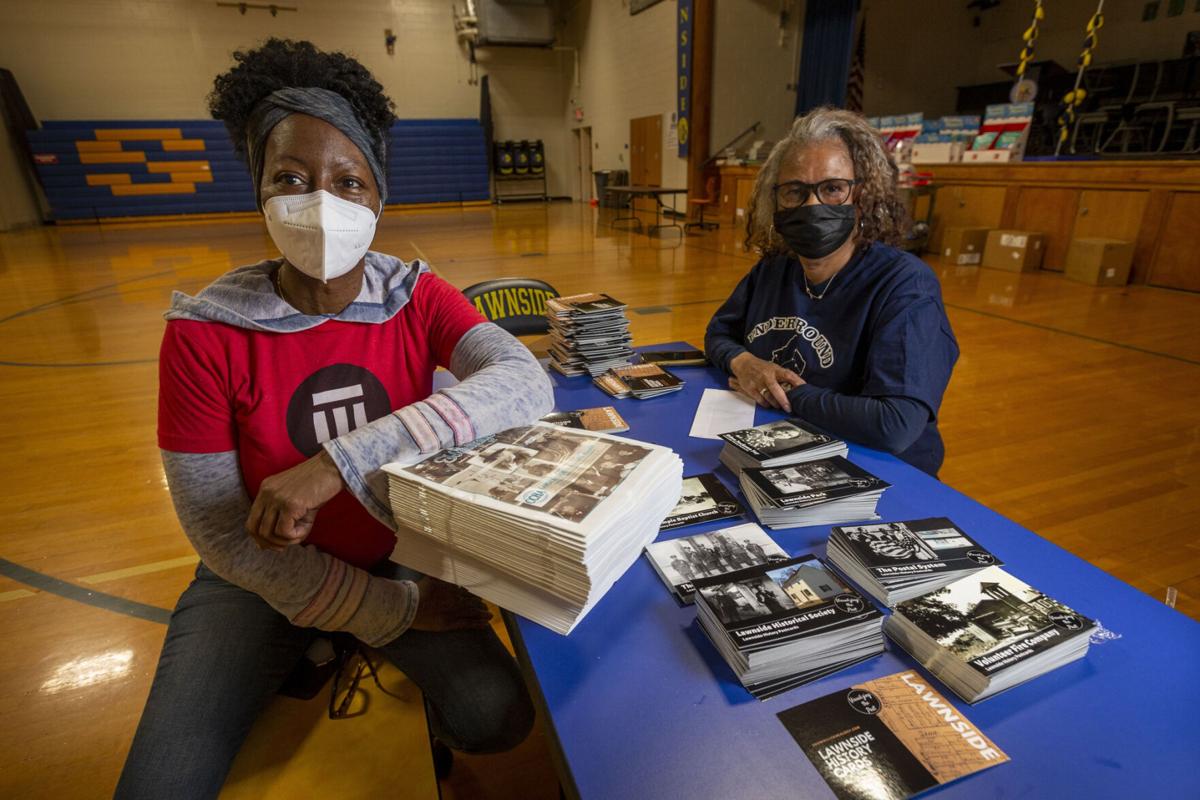 Teacher Shamele Jordan, left, and retired teacher Muneerah Higgs with post cards of historic places in Lawnside, N.J. These post cards, along with other educational information, is being packaged for students learning virtually. Lawnside Public School, elementary students are learning about famous people and places in the historic Black community during Black History Month. Alejandro A. Alvarez/Philadelphia Inquirer/TNS 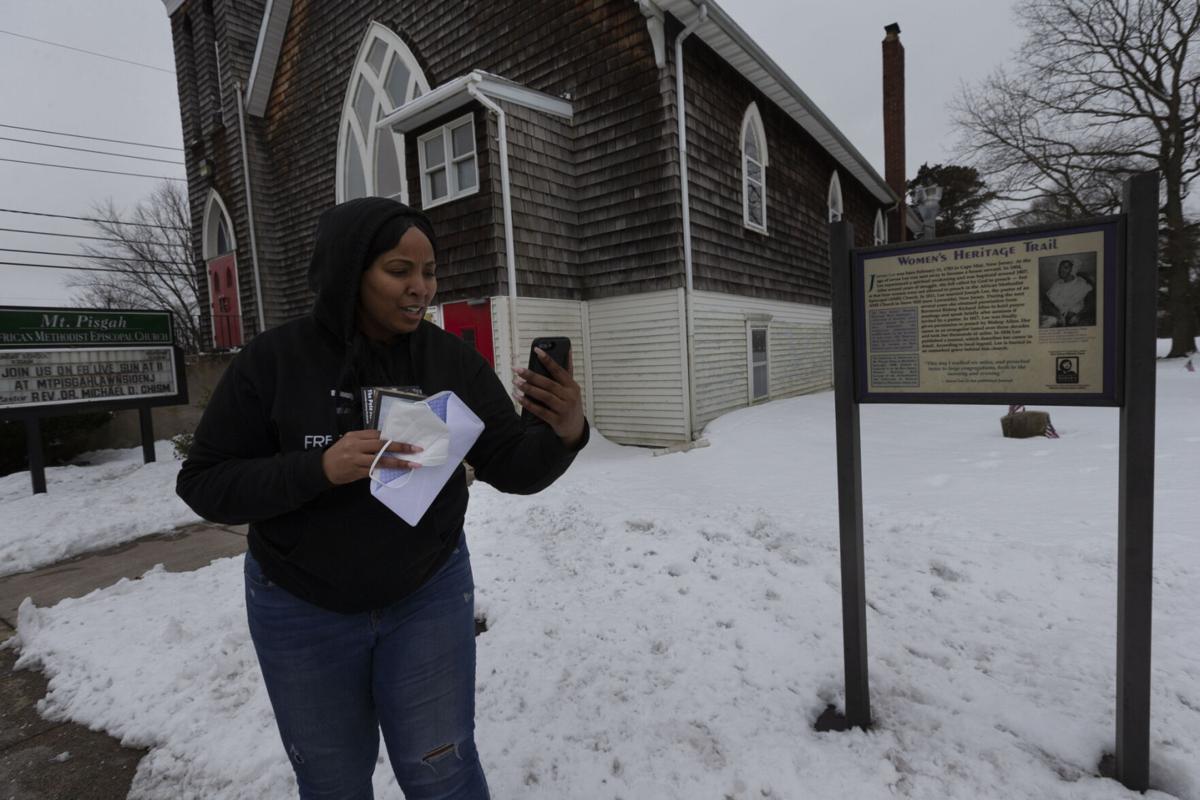 Teacher Patricia Cobia, visits the Mt. Pisgah African Methodist Episcopal Church in Lawnside and chats with students as she tours Lawnside and its historic sites on Tuesday, Feb. 9. Alejandro A. Alvarez/Philadelphia Inquirer/TNS

Teacher Shamele Jordan, left, and retired teacher Muneerah Higgs with post cards of historic places in Lawnside, N.J. These post cards, along with other educational information, is being packaged for students learning virtually. Lawnside Public School, elementary students are learning about famous people and places in the historic Black community during Black History Month. Alejandro A. Alvarez/Philadelphia Inquirer/TNS

Teacher Patricia Cobia, visits the Mt. Pisgah African Methodist Episcopal Church in Lawnside and chats with students as she tours Lawnside and its historic sites on Tuesday, Feb. 9. Alejandro A. Alvarez/Philadelphia Inquirer/TNS

When genealogist Shamele Jordon decided to find a way to bring history alive for students at the Lawnside Elementary School in New Jersey, she found the answer in their backyards in the African American community.

Students are discovering sites and burial grounds in the South Jersey borough, a stop on the Underground Railroad that sheltered runaway slaves. They are also learning about ancestors and historical figures who developed Lawnside.

Jordon, a researcher, teamed with Muneerah Higgs, a retired Lawnside third-grade social studies teacher, to create a Black History Month project for third to eighth graders called “Visualizing Your Past.” They hope to instill pride by giving students a birds-eye view of their history.

“It’s not how history is usually taught,” said Jordon, 54, who lived in Lawnside as a youngster. Through this project, she said, “history is in your backyard — it’s not just in textbooks.”

Located 13 miles southeast of Philadelphia, Lawnside was settled before the Civil War as “Snow Hill,” a haven for free blacks and runaway slaves on land purchased by abolitionists. The Camden County town later became Lawnside and was incorporated as the first all-Black municipality north of the Mason-Dixon Line.

Each week, Jordon and Higgs prepare a packet of five history cards designed by Higgs that students pick up at the school, which has been on remote learning since last spring. The cards depict historic figures organizations and sites, such as the Peter Mott House, built around 1845 and the oldest house in Lawnside. Mott, a free man and a preacher, provided refuge for escaped slaves.

Students must take a selfie in front of a historic site, produce a video or a creative document such as a newsletter about the topic. They also get quizzed about the cards during virtual history class each week. Those with the best work will get prizes when the project ends.

During a recent class, they learned about Dr. Roscoe Moore, who helped establish Lawnside’s first Red Cross chapter during World War I and, later, as a school physician, administered the smallpox vaccine to students — including Higgs. The 73-year-old retired teacher showed the students a small scar on her arm from the vaccination more than a half-century ago.

“Just like we have a pandemic now and people are getting vaccinated now for the coronavirus,” she explained.

Third-grader Ava Wakins was amazed that Higgs was vaccinated by Moore in the 1950 s.

Some students are descendants of the town’s founding families, like the Stills. Others are newcomers just learning about Lawnside’s storied past and treasures. Three sites in the borough of about 3,000 residents are listed on the National Register of Historic Places; several more are eligible.

“They are doing exactly what we hope to see done to keep the history alive and current,” said Linda Shockley, president of the Lawnside Historical Society.

Jordon, of Berlin, host of the online program Genealogy Quick Start, initially started the project after using genealogy and mapping apps at Mt. Peace Cemetery to teach eighth-graders. She hopes to share the Lawnside history project with other districts. “This is the history of America,” said Higgs, who has produced documentaries about Lawnside. “It’s from slavery to freedom.”

School Superintendent Ronn Johnson said students get regular lessons about the town’s founding, but that the history project has added a new dimension to reinforce textbooks. “We try to instill pride in them and let them know they’re from a special community,” Johnson said.

Earlier this month, third-grade teacher Patricia Cobia helped her class on a snowy morning by giving them a virtual tour — crisscrossing the 1.5-mile town in her car and making four stops, and asking her students watching her livestream to identify her location.

Her first stop was Mount Pisgah AME Church, which began forming in 1782, and where Rev. Jarena Lee, the wife of the church’s pastor, became the first female in the AME domination allowed to preach.

“My grandmother went there,” commented one student.

Cobia also visited the Mott House, a historic site that was preserved as a museum, and Mt. Zion United Methodist Church, which was formed in 1815 by a dozen members who broke away from Mount Pisgah.

When Cobia stopped at Mt. Peace Cemetery, where John Lawson and more than 150 Civil War soldiers are buried, Darren Thomas, a third-grader, excitedly shared that he was a descendant of Lawson, who received a Medal of Honor for refusing to give up his station aboard the USS Hartford during a fierce battle.

“What can you learn from him?” asked Higgs. “Courage. You can do anything.”

The cemetery, which covers 11 acres on the White Horse Pike, was established in 1900 as the final resting place for more than 3,000 Black veterans, former slaves, and those who could not be buried in white-only cemeteries.

“Back then just because people were Black meant that they couldn’t be buried in the same graveyard as white people in a graveyard at all, that’s just rude,” Vicor Paulino wrote in the class chat.

It was such real-life connections that Cobia, a teacher for 12 years, had hoped to deliver. “It’s an amazing thing when students become excited about learning,” she said.