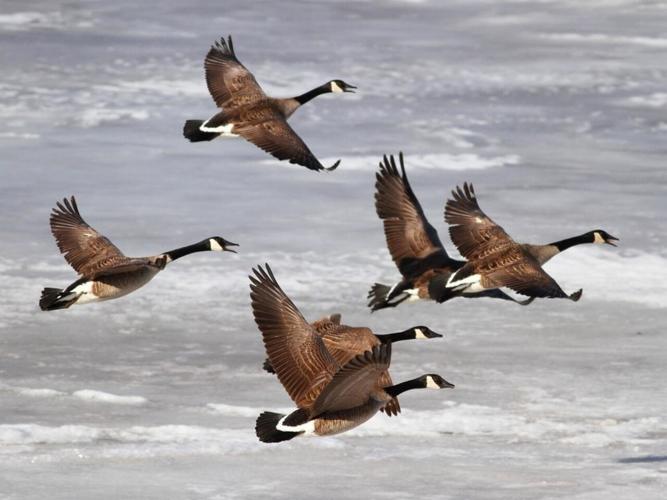 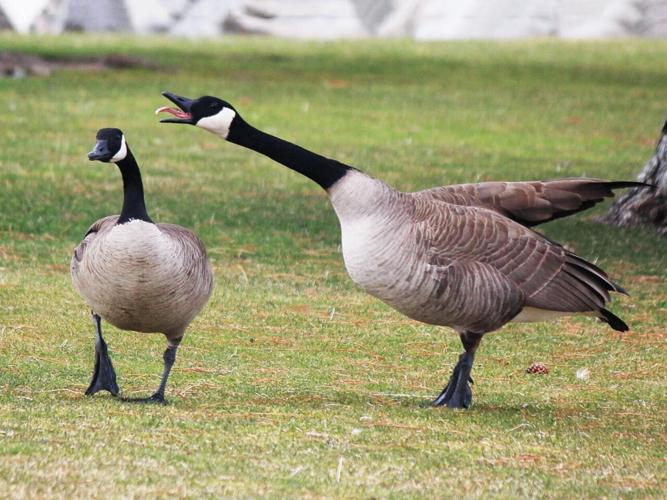 Canada geese may become aggressive when they feel threatened. When they charge, they usually stand erect, spreading their wings and producing a hissing sound followed by the attack, which usually involves biting and wing flapping. Photo courtesy of Cornell Lab of Ornithology/Esme Rosen/Macaulay Library 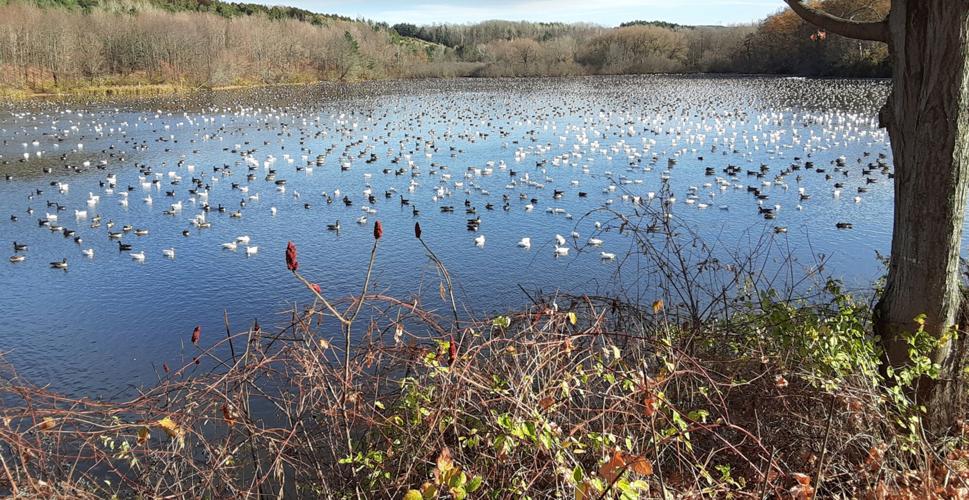 Canada geese may become aggressive when they feel threatened. When they charge, they usually stand erect, spreading their wings and producing a hissing sound followed by the attack, which usually involves biting and wing flapping. Photo courtesy of Cornell Lab of Ornithology/Esme Rosen/Macaulay Library

Canada geese, often mistakenly referred to as Canadian geese, are the second largest waterfowl in North America. (The largest is the swan.) They’re also the most widely distributed, with a range that encompasses Arctic, sub-Arctic, and temperate regions in Alaska, Canada, all of the lower 48 states, and Mexico. They’re also found in Greenland, northern Europe, and parts of Asia. Introduced populations have established themselves in New Zealand.

Only the females are actually called geese. The males are known as ganders. And the young are goslings. A large group is called a flock. A flock on the ground is known as a gaggle. And geese flying in the characteristic V-formation are referred to as a wedge, team, or skein.

Canada geese are almost definitely northern New York’s most-recognized waterfowl; probably because they’re literally big honkin’ birds; not songbirds. The honking call is most-commonly associated with wedges of geese in flight. They’re actually fairly quiet when on land or in water. And many researchers believe that the honking sound geese make when flying helps them coordinate position shifts within the V-formations.

Actually, Canada geese have a rather elaborate system of vocal communication, with adults having, by some accounts, as many as 13 different calls. According to many researchers, when adult geese feel threatened, especially with regard to protecting a nest or goslings, they’ll stand up to predators by honking, hissing, cackling, and snoring loudly. And if that doesn’t work, they’ll bite, thrash, slap, and even beat intruders with their wings and beaks.

Based on genetic studies and differences in size, voice, and breeding habitat, ornithologists separate Canada geese into two species. The larger-bodied geese (30- to 40-inches or more in size, with a 4- to 6-foot wingspan) are still referred to as Canada geese (Branta canadensis), but the smaller-bodied ones are called cackling geese (Branta hutchinsii).

The two species are difficult to tell apart. On top of which, there are seven subspecies of Canada geese and four subspecies of cackling geese, with each subspecies exhibiting subtle, and in some cases nearly indistinguishable, differences from the others (e.g. neck length, bill shape).

Flight enables migratory birds, such as geese, to find safe breeding and nesting sites in the north, where food is plentiful in the summer, as well as the ability to seek out environments free of the difficulties that come with cold weather, for over-wintering. Northeastern New York lies along the Atlantic “flyway,” one of the four major North American migratory routes. Geese passing through our region overwinter along the East Coast in a range that reaches from downstate to north Florida. They breed in areas as far north as Arctic Canada.

Starting in September through the end of November and even into December, they take refuge across the north country, where our many ponds, lakes, marshes, and reservoirs provide open water, which affords protection from land predators. Nearby pastures, farm fields, parks, golf courses, and grassy waterfront yards provide food, including nutrient-rich grasses, aquatic sedges, algae, seeds, berries, insects, slugs and snails, and agricultural grains.

Where I live, outside of Malone, they’re commonly seen in large numbers in agricultural areas; eating pasture grasses or gleaning corn and soybeans; foraging in recently-harvested fields. They’ll stay until they either run out of food or the weather becomes disadvantageous.

Surprisingly, Canada geese migration is not an instinctive process. It’s learned. The younger geese come to know migration routes and patterns by acquiring that knowledge from their elders.

And even though the majority of Canada geese journey hundreds, even thousands of miles over mountains, plains, and in some cases oceans in both spring and fall, many travel only short distances, while others are now permanent residents in some locales, moving only as the availability of food changes.

According to New York State’s Department of Environmental Conservation, resident or non-migratory populations of Canada geese have grown steadily across the state, which is now home to approximately 200,000. Combined with populations nesting in other eastern states, there are, by all accounts, more than a million year-round resident geese in the Atlantic Flyway; many in places where they were uncommon just 30 years ago.

From extirpation to overpopulation

There’s a lot of debate about the current population of Canada geese in North America. Estimates vary significantly. But according to the United States Geological Survey’s North American Breeding Bird Survey, their population increased by over 7% per year between 1966 and 2019.

Amazingly, less than a century ago, it was believed that they’d been hunted into extinction. Then a small flock was discovered in Rochester, Minnesota and a plan to safeguard the tiny population that remained was put into place. The birds were protected, provided with food, and allowed to reproduce.

In many places where just 50 years ago they were considered extirpated, Canada geese now exist in large numbers. And everywhere, populations of Canada geese are either stable or increasing at this time.

Now that they’re no longer endangered, roughly two million Canada geese are harvested every single year in the United States. And while this may seem unsustainable, their overall numbers don’t seem to be affected.

Do you ever shop for your groceries online?