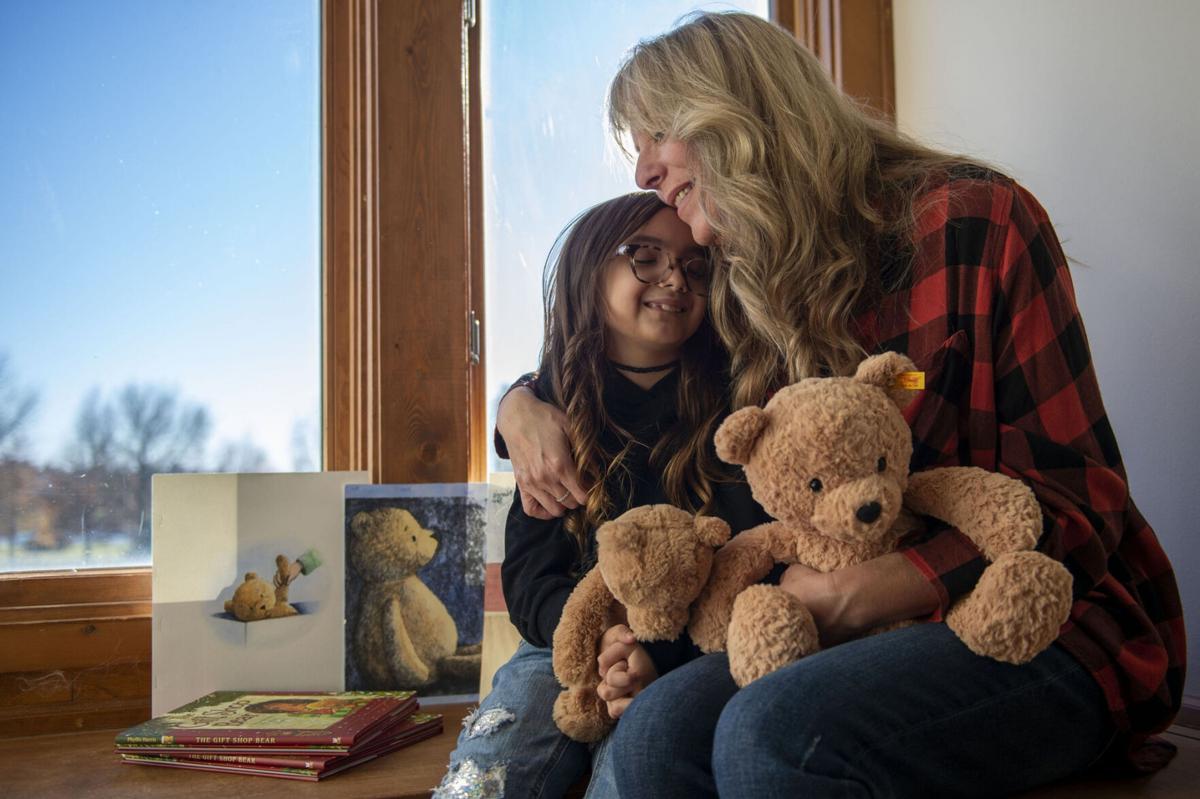 Phyllis Harris, author and illustrator of “The Gift Shop Bear,” shares a hug with her granddaughter Eliana Hernandez at her home studio in Raymore, Missouri, on Tuesday, Nov. 23, 2021. Her granddaughter was the inspiration behind her new book after she found her mother’s old bear stored away inside a box in the attic. Emily Curiel/The Kansas City Star/TNS 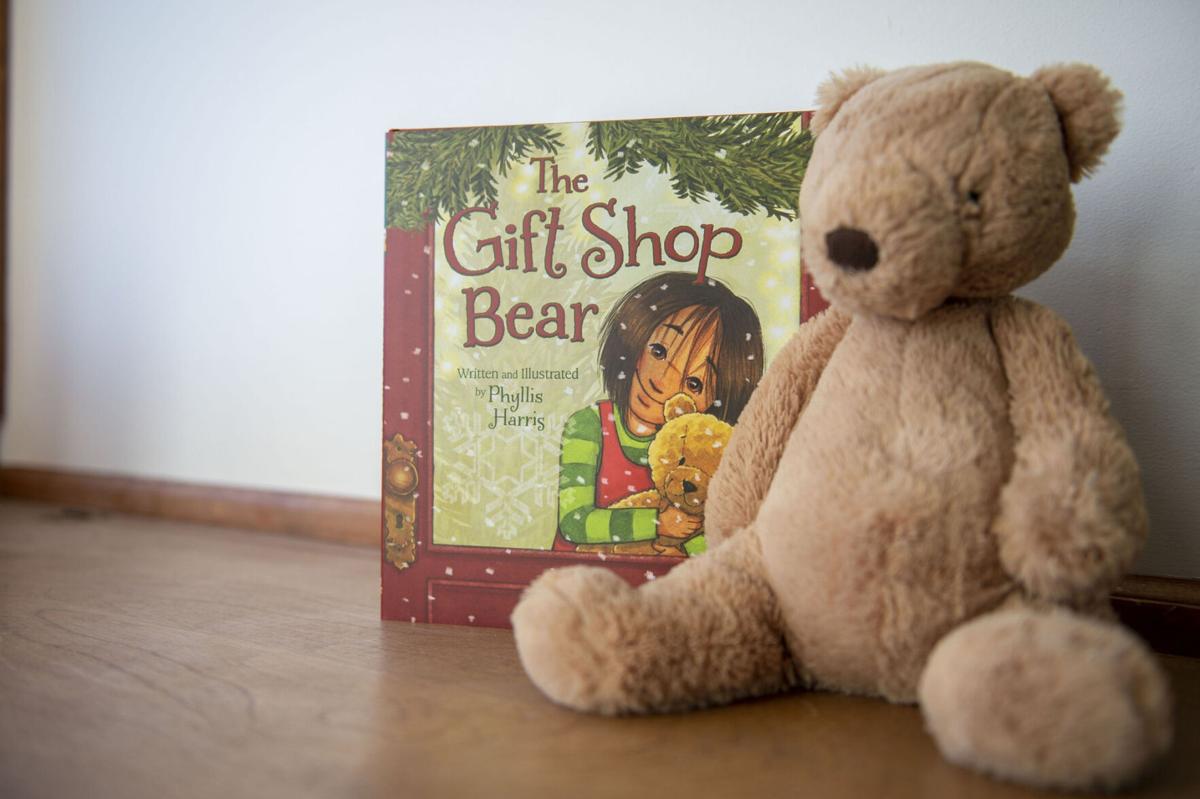 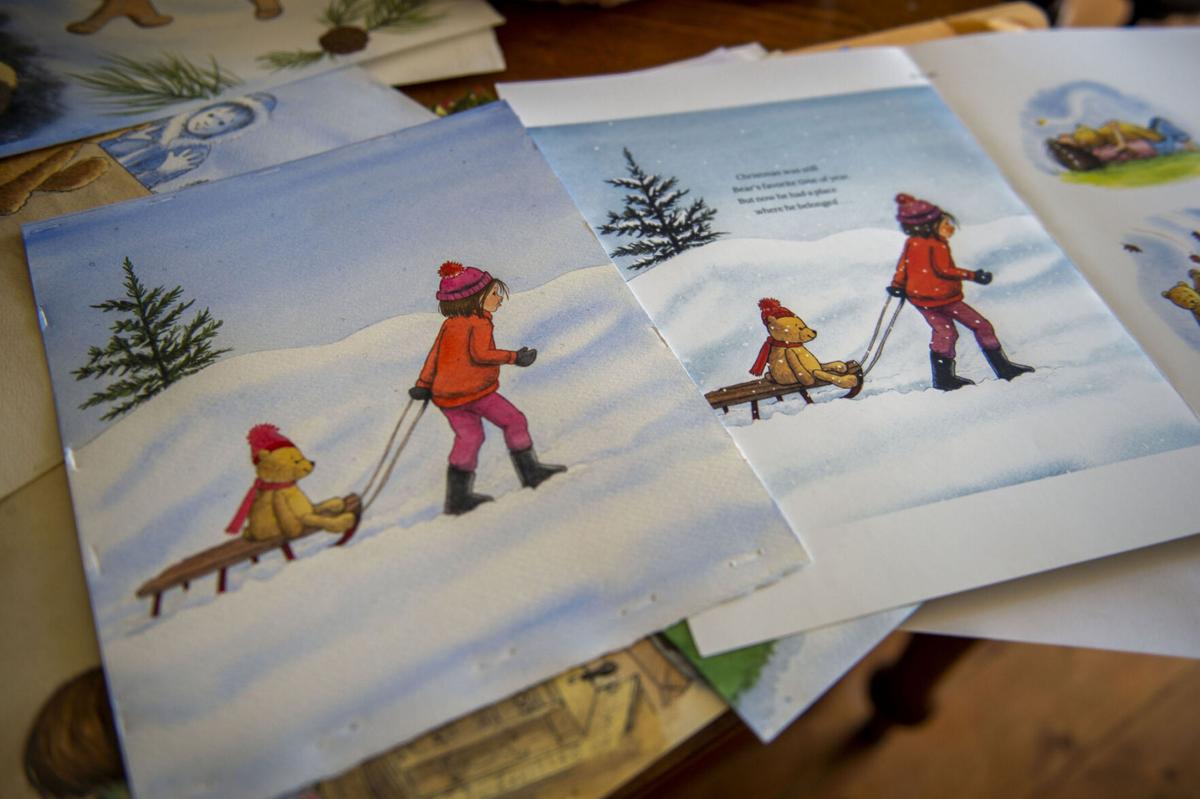 Phyllis Harris displays the first drafts of illustrations for her new book “The Gift Shop Bear,” at her home studio in Raymore, Missouri, on Tuesday, Nov. 23, 2021. Harris says she builds her art, piece by piece. She starts her illustration by sketching it first, then uses watercolor to paint, and later scans it digitally to add warmer tones. Emily Curiel/The Kansas City Star/TNS 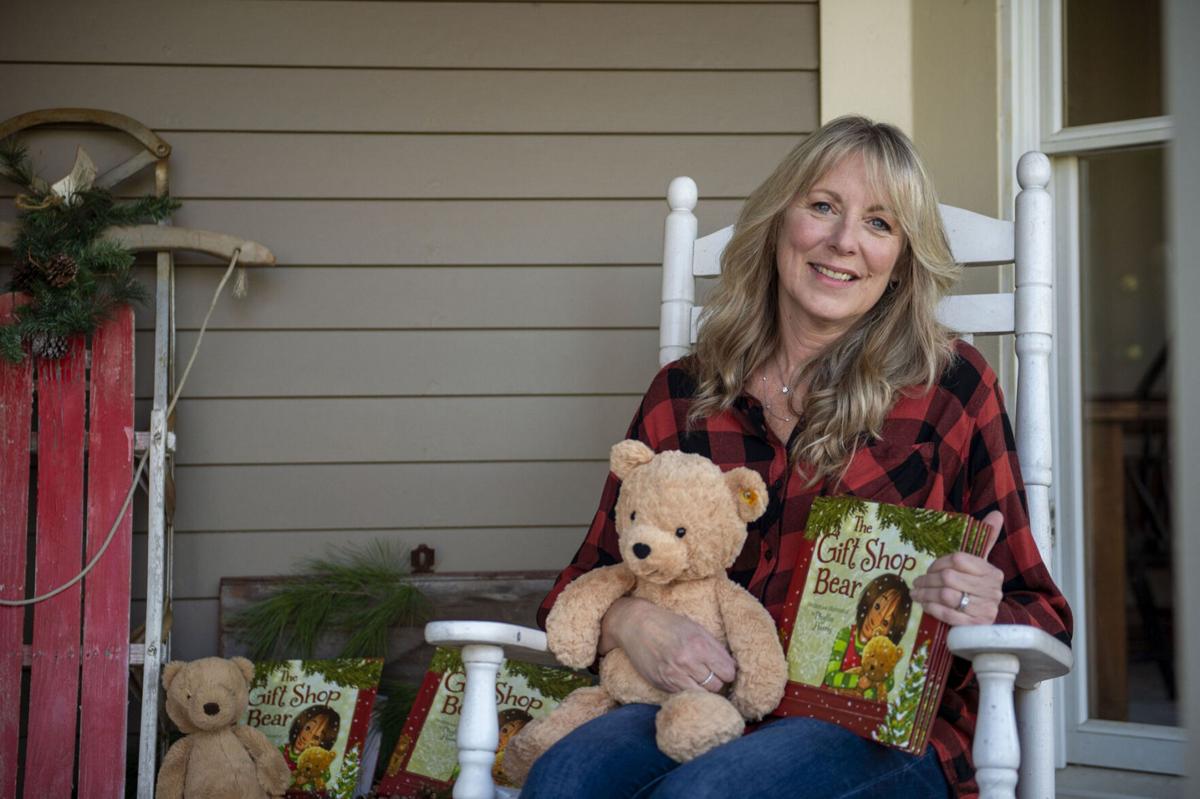 Phyllis Harris, author and illustrator of “The Gift Shop Bear,” shares a hug with her granddaughter Eliana Hernandez at her home studio in Raymore, Missouri, on Tuesday, Nov. 23, 2021. Her granddaughter was the inspiration behind her new book after she found her mother’s old bear stored away inside a box in the attic. Emily Curiel/The Kansas City Star/TNS

Phyllis Harris displays the first drafts of illustrations for her new book “The Gift Shop Bear,” at her home studio in Raymore, Missouri, on Tuesday, Nov. 23, 2021. Harris says she builds her art, piece by piece. She starts her illustration by sketching it first, then uses watercolor to paint, and later scans it digitally to add warmer tones. Emily Curiel/The Kansas City Star/TNS

KANSAS CITY, Mo. — Four-year-old Eliana Hernandez was looking around her grandmother’s attic in Raymore, Missouri, when she found a well-worn teddy bear stored in her mother’s old toy box. The poor little guy had been up there alone, with no friends, for years and years — ever since her mother was a little girl herself.

Eliana rescued the orphaned teddy bear and named him Heart Bear, and they’ve lived happily ever after. But that wasn’t “The End.”

In fact, it was a beginning.

That grandmother, Phyllis Harris, happens to be a prominent illustrator of children’s books, and she knows a good storyline when she sees one. Eliana and Heart Bear inspired the characters of Annie and just plain Bear in the new Christmas-themed “The Gift Shop Bear,” which Harris wrote and illustrated. The book (published by Hachette Book Group/WorthyKids) is now available online and in bookstores.

It is the first children’s book Harris has written after illustrating more than 30, including “Maverick and Me” by Katherine Schwarzenegger in 2017 and “On Christmas Day” by legendary children’s author Margaret Wise Brown in 2019.

Continuing the Christmas theme was hardly a strategic move for Harris, however.

“I didn’t intend that,” she said. “When I first started writing this book, it was not a Christmas book. It morphed into a Christmas book, and I don’t remember exactly how that happened.”

Adria Goetz of Martin Literary Management is glad it morphed. She had been looking for a new Christmas-themed children’s book to push but couldn’t find the right one ... until Harris pitched hers.

“I received a million bazillion Christmas submissions over the years,” Goetz said. “I really wanted something that I felt would add a unique story to the Christmas picture book canon. But this is the first Christmas book I’ve ever sold because I’ve been very, very picky. So I think it’s really special.

“I thought it was a really sweet story, and her illustration style is just so perfect for a Christmas story.”

Describing herself as “mostly self-taught,” Harris has developed her illustration style and career over the past 40-plus years, all in the Kansas City area. After attending Ruskin High School and Longview Community College, she worked for two decades as a graphic designer, first full time for Sun Publications in Overland Park, then freelancing for Hallmark Cards and others.

“I was a stay-at-home mom, and I freelanced, so I took my daughter along to my freelance gigs,” she said of daughter Emily.

“I waited until my daughter was in grade school before I really started playing with the book side. It took a few years to get into it. I tell you, persistence has paid off for me.”

Persistence — and patience. Harris spent 20 years as a graphic designer before taking the leap into book illustrating, then worked another 20 years before finally taking a stab at writing.

Illustrating “On Christmas Day” was a coup for Harris. Brown, author of the bestselling “Goodnight Moon” and “The Runaway Bunny,” died in 1952 at the age of 42 but left behind dozens of manuscripts, many of which have been published in the years since.

Before that, Harris ventured into the fast-growing domain of celebrities-turned-children’s authors. Schwarzenegger, who is the oldest child of Arnold Schwarzenegger and Maria Shriver and is married to “Guardians of the Galaxy” actor Chris Pratt, has written three self-help books in addition to “Maverick and Me,” about adopting a dog.

Schwarzenegger helped raise Harris’ profile as an illustrator during promotional events, including on network morning shows.

“She was at least one of those celebrities that did mention the illustrator, which was really nice,” Harris said.

Harris can now speak from experience when she says the time spent writing a children’s book doesn’t begin to compare to the time illustrating one.

“To illustrate a book, it can take months and months and months, three to six months on this book,” she said. “On the writer’s side, it’s moments, when you’re able to sit down and type and something comes out. And so literally it’s hours compared to months.”

But she added, “I don’t want to discredit the writing side because that is so difficult for me.”

Harris supplements her book income by selling her art. Working out of the attic above the three-car garage in her Raymore home, she launched an online shop at PhyllisHarrisDesigns.com in 2012. People around the world have purchased her art prints, which are sold online at Amazon, Home Depot, Walmart, Bed, Bath and Beyond ... and beyond.

But that business will take a backseat to her new passion of writing and illustrating.

“Now that I’m working on my books, I really want to focus full time on that area,” Harris said.

Her second book as author/illustrator already is in the hands of Goetz, who expects big things for “The Gift Shop Bear,” which came out Oct. 26, and for Harris.

“This book has really raised her profile as a creator,” the agent said. “I think it’s kind of put her on the map.”

Harris hopes her own story will hit home, too.

“I want to inspire people that you’re never too old to go after your dream,” she said. “I’ll be 60 next March, and I feel like I’m just getting started. I’m really excited about it.”