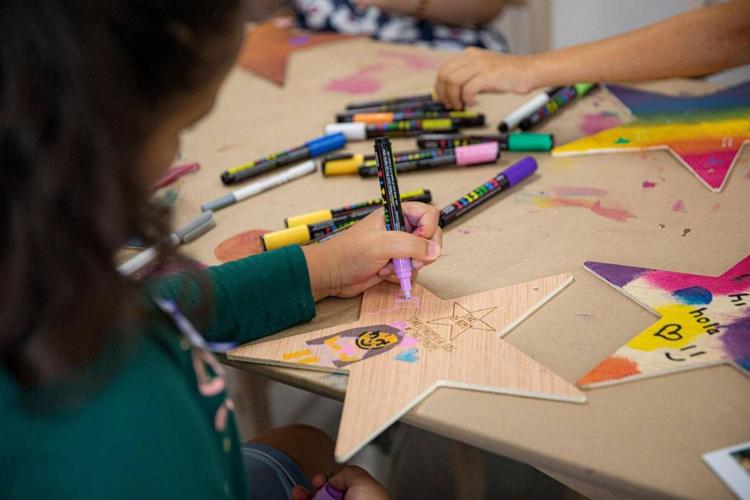 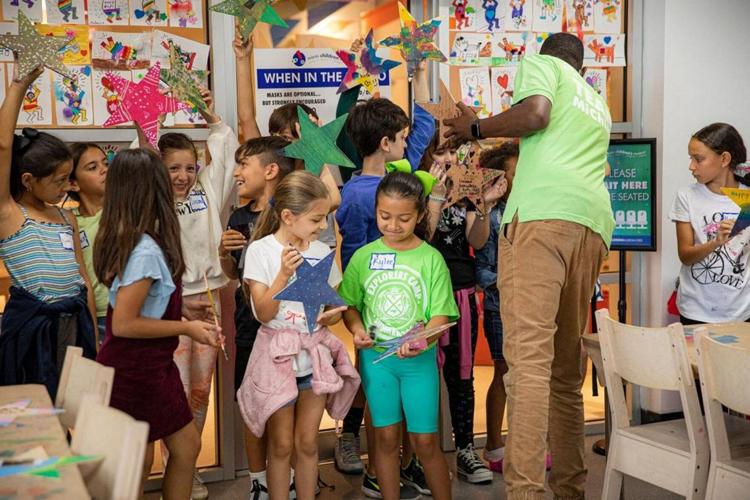 MIAMI — As children shrieked and played pretend veterinarian, musician and firefighter, a group of summer camp students snaked around the rooms of the Miami Children’s Museum. They lined up at their destination: a glass room adorned with colorful drawings.

Luciana Goncalves, 8, pranced inside and took a seat at a table, a wooden star lying in front of her. After listening to the instructions, she dabbed a sponge into purple paint and then, onto her star.

In the coming months, Luciana’s tie-dye-inspired star will make its way to Ukrainian refugee children living in Krakow, Poland. The museum, which partnered with the nonprofit Stars of HOPE, aims to send 2,500 stars to the Jewish Community Centre of Krakow.

The stars will arrive in all kinds of styles: painted in pink, yellow and blue; embellished with hearts, peace signs and winky faces; inscribed with messages like “Stay safe!” and “You are butiful.” Some will be abstract, others Miami-themed with palm trees and sunsets. But each will have the name and photo of its creator.

The initiative began after a group of rabbis visited the JCC Krakow in April, said the museum’s executive director, Deborah Spiegelman. When she saw photographs of the children’s faces, she brainstormed ideas to lift their spirits.

And then she reached out to Jonathan Ornstein, executive director of the JCC Krakow. The center opened its doors to Jewish and non-Jewish immigrants fleeing violence after Russia invaded Ukraine in February.

Hundreds of children have painted stars at the MacArthur Causeway children’s museum since May, Spiegelman said. She believes the experience teaches children empathy amid an uptick in violence, hatred and anti-Semitism.

“The importance here lies in children being accepting and loving to all children and showing goodness and kindness,” she said. “You have children in crisis, and it’s a way for children in our community to connect with others regardless of race, background, ethnicity, color, anything.”

Spiegelman hopes the stars welcome the children to their new community — and that they can ultimately return the favor through stars of their own.

As many as 200 children visit the JCC Krakow every day, Ornstein said. Many join their mothers as they collect necessities like food, hygiene supplies, clothing and toys or attend daycare and language classes, and get social services.

JCC Krakow usually serves the Jewish community of the area, which was almost decimated by the Holocaust, Ornstein said. The center is even located minutes away from a painful symbol: Auschwitz. In February, staff drew on one of the tragedy’s most important lessons. Not to be silent.

Just 150 miles from the border, the center decided to help Ukrainians during their time of need, Ornstein said. The JCC took on a humanitarian resource center role, housed 400 refugees in hotels and opened the Paszkowka Palace, a wedding venue-turned-housing complex that hosts 85 refugees.

And in the next months, staff will distribute the stars at the JCC.

“The two things children need the most, especially with children that have gone through the trauma of war, ...are care and hope,” he said. “And I think that these stars show that children, their peers across the world care for them and are thinking about them.”

For Orenstein, the stars are also a way to heal and move forward.

“I think all of us, from the time that we are children, look up at the stars and understand that there’s a big world and people care about us,” he said.

The stars show that the global community stands with them, even children in Miami, Orenstein said. And if some stars are sent back to Miami, they would establish a valuable connection.

Connection is at the center of Stars of HOPE’s projects, executive director Josh Garcia said. The nonprofit has supplied stars to connect communities to victims of natural disasters and other tragedies, including the Surfside condo collapse and Parkland school shooting. The stars will remind the Ukrainian children that people still care about them despite the conflict fading from focus.

“I want her to understand how different cultures are going through different things, different hardships and also make her more mindful of everything that is happening in the world,” she said. “We need to find a way to speak to our children in a language that they understand.”

And for refugee children in Krakow, the decorated wooden star may let them know that they’re on the minds of children like Luciana, even if thousands of miles away.

How often do you replace your vehicle?