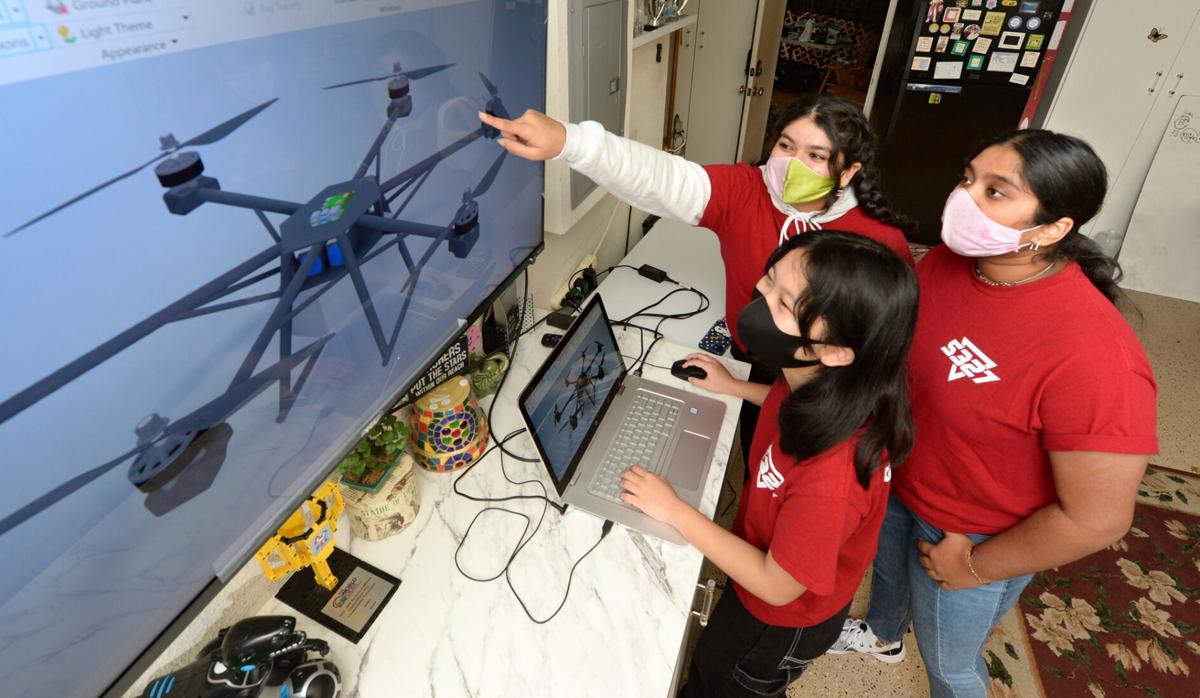 Dublin High students Karen Zhao, 16, bottom left, and sisters Nirupama Suravarjjala, 16, top left, and Niharika Suravarjjala, 17, all members of the Gael Force Robotics Team, look at the design of the special sanitizing drone the robotics team is building in Dublin, Calif., on Nov. 17. The sanitizing drone is designed to help clean the school’s football field and bleachers. The group of 10 students from the team hopes to have the drone up and running this month. Doug Duran/Bay Area News Group/TNS 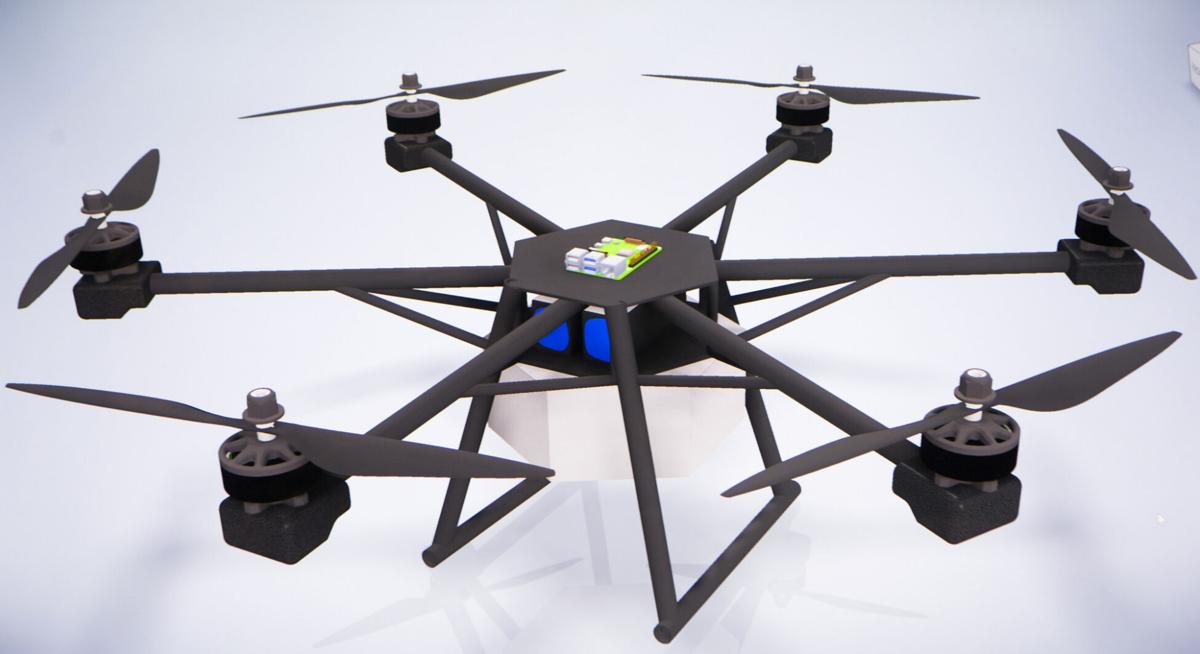 Dublin High students Karen Zhao, 16, bottom left, and sisters Nirupama Suravarjjala, 16, top left, and Niharika Suravarjjala, 17, all members of the Gael Force Robotics Team, look at the design of the special sanitizing drone the robotics team is building in Dublin, Calif., on Nov. 17. The sanitizing drone is designed to help clean the school’s football field and bleachers. The group of 10 students from the team hopes to have the drone up and running this month. Doug Duran/Bay Area News Group/TNS

DUBLIN, Calif. — Dublin High School’s robotics team has come up with a creative solution to help clean parts of the school outside during the pandemic — a sanitizing drone.

They call it the TERSUS Project — meaning “clean” in Latin, and also an acronym for Technologically Effective Rapid Smart Unmanned Sanitizer. The drone was designed by the Gael Force Robotics Team, and the project has 10 students working to design, construct and eventually fly the sanitizing drone.

The team’s president and project manager, Niharika Suravarjjala, said the team was approached by their vice principal, Paul Faris, who told them it was taking five to six hours to disinfect the bleachers at the football stadium after football practice and games. One of the students then suggested making a sanitizing drone to help.

“We decided to challenge ourselves to build the drone to not only keep our students safe, but try to find a cost-effective way to do it,” said Niharika, who is a senior.

The team designed the drone that they will build themselves that will have the ability to spray a disinfectant to clean the school’s 6,200-square-foot football stadium once students return back to school.

The drone will at first have the ability to be manually flown by a pilot on the ground using a phone application, which the students will also develop. Then, the students plan on making upgrades that will include the ability for autonomous flying, and even artificial intelligence so that the drone can have depth perception and detect objects on its own, Niharika said.

The team eventually hopes the model can be used at places beyond a football stadium — such as at city playgrounds or eventually indoors.

Nirupama Suravarjjala, a junior on the team (and Niharika’s sister) is in charge of research and design management and technical documentation. She said she feels this project will be especially important for the school when it reopens because of its dense population and the safety precautions it will need to take.

“We wanted to help out, even in a small aspect,” she said. “That’s the most important, to help out and provide for our community.”

The team researched similar industrial drone models, such as the ones the Atlanta Falcons use for their football stadium. The students found those models can cost up to $15,000, and as Niharika said: “We can do a little better than this.” They started a GoFundMe page with a goal of $4,000 to raise funds for parts and equipment to build the drone and have already surpassed their goal.

When built, their drone will also have twice the amount of flight time of other industrial models, at 22 minutes without needing to be recharged, she said.

Nirupama said the first phase of the project will include construction of the model to be manually operated, then the second phase will incorporate the artificial intelligence for it to fly autonomously and include a camera. The carbon fiber base of the drone will use a localized global nationwide satellite system (called GNSS) to fly autonomously by putting in coordinates beforehand, without the need for a pilot.

The third phase will have voice recognition to tell it what to do, much like a Google Home or Alexa device.

Of course, there are still some hurdles before they can start using the drone. Niharika said they’ll need to make sure the drone is FAA compliant, and have at least one of their team members become licensed to pilot the drone.

The team hopes to have the first phase done by mid-December, in time for the potential return of students, which could be as early as Jan. 19. The district is in the midst of forming a plan for students to return to in-person learning at elementary schools, while a plan for middle and high schools may also come soon.

The student-run robotics club, named after the school’s mascot, also has six teams that take part in competitions held by VEX, an educational robotics company that holds state and national championship games. The Gael Force Robotics Team is one of the largest clubs at Dublin High, with 180 members.

Do you support the HALT Act, which prohibits use of solitary confinement for more than 15 consecutive days?