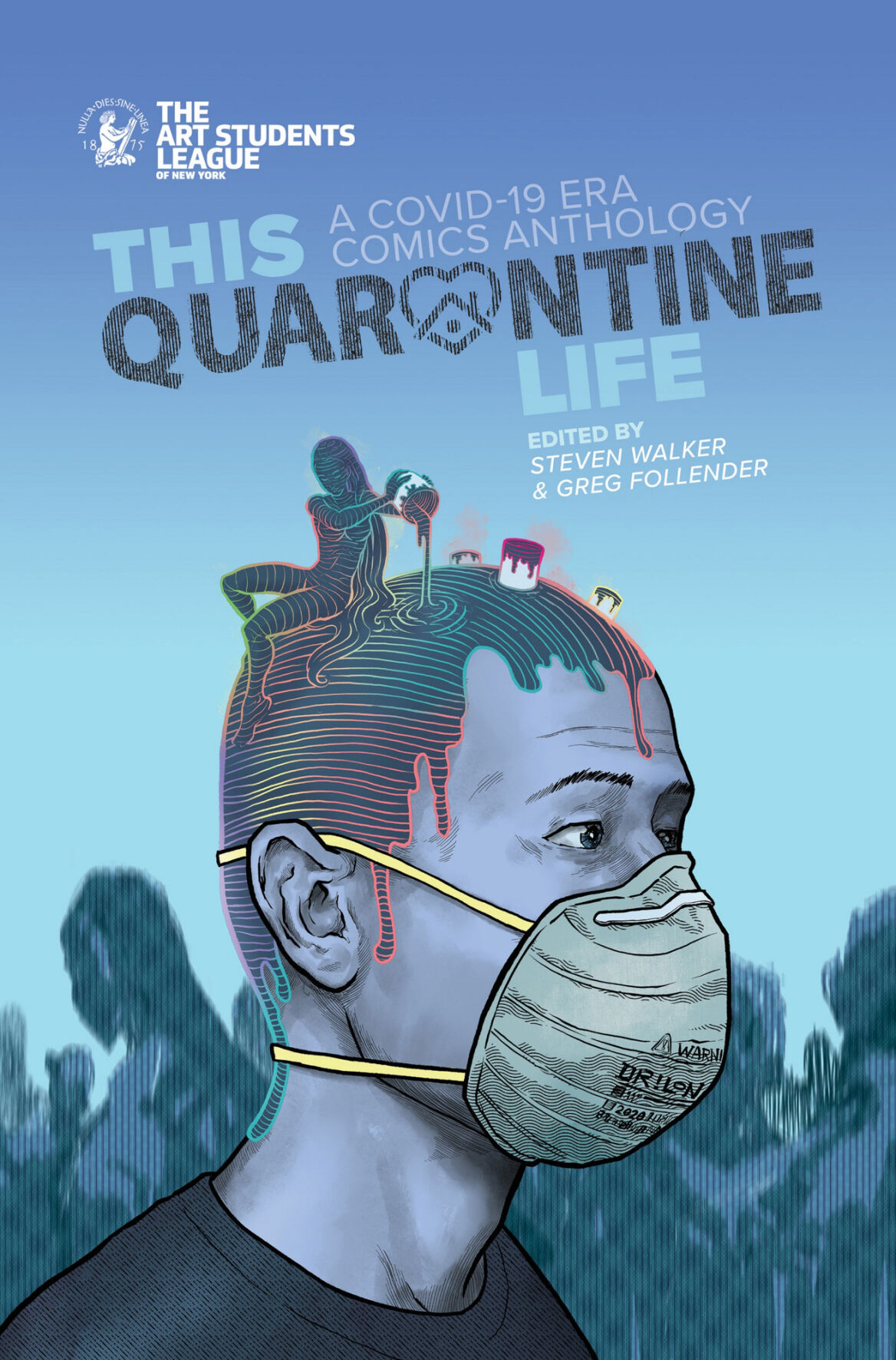 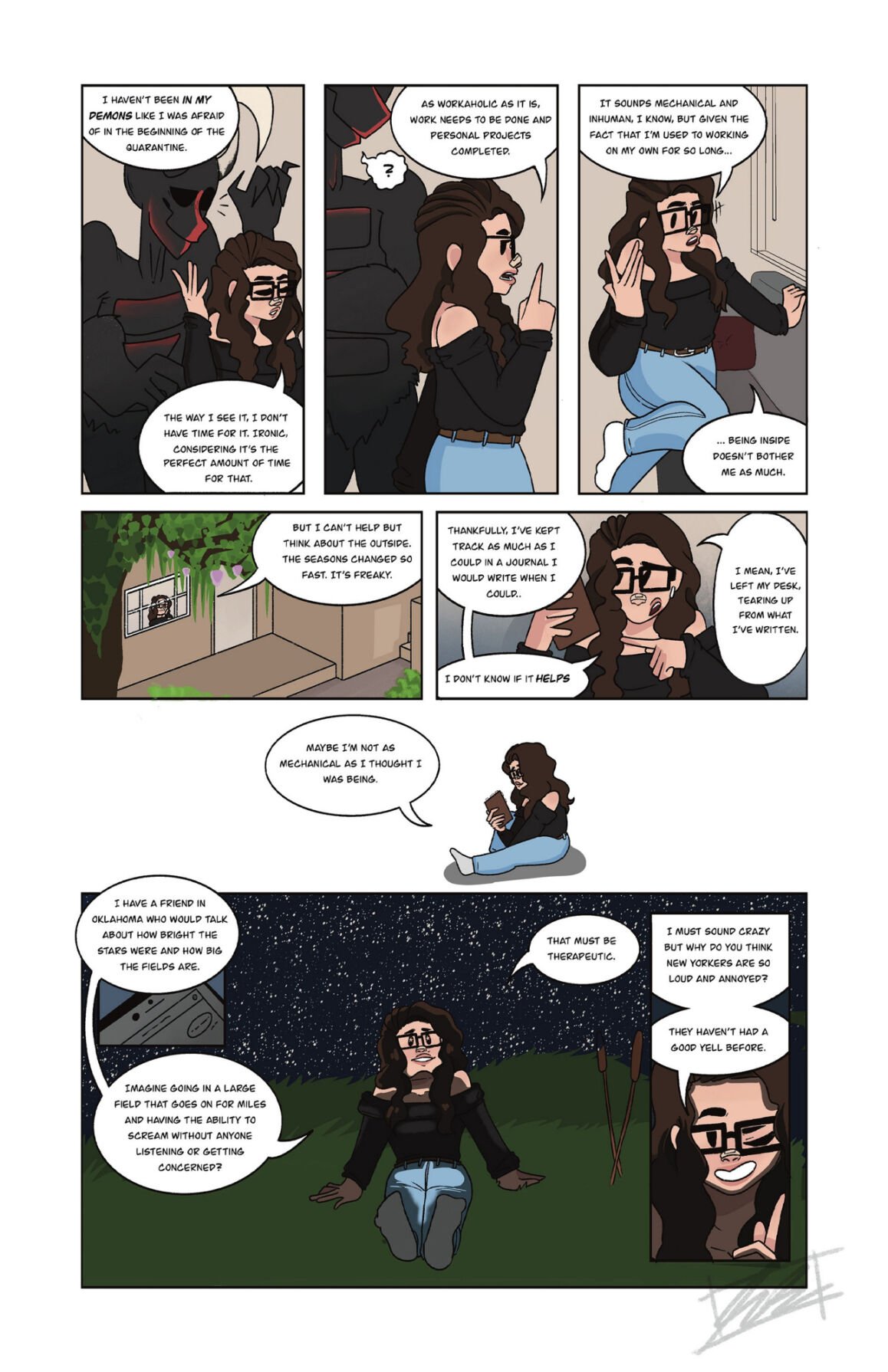 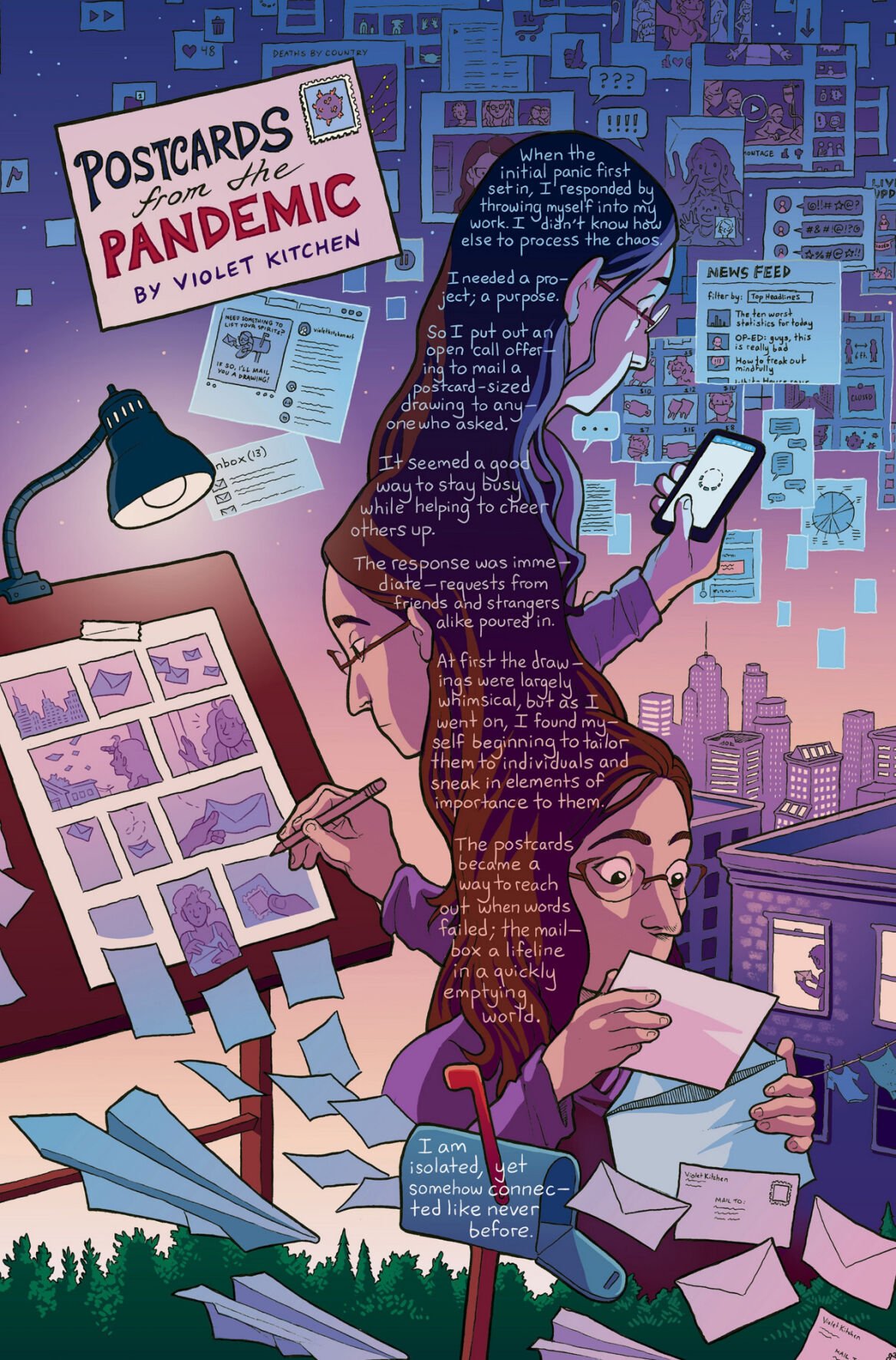 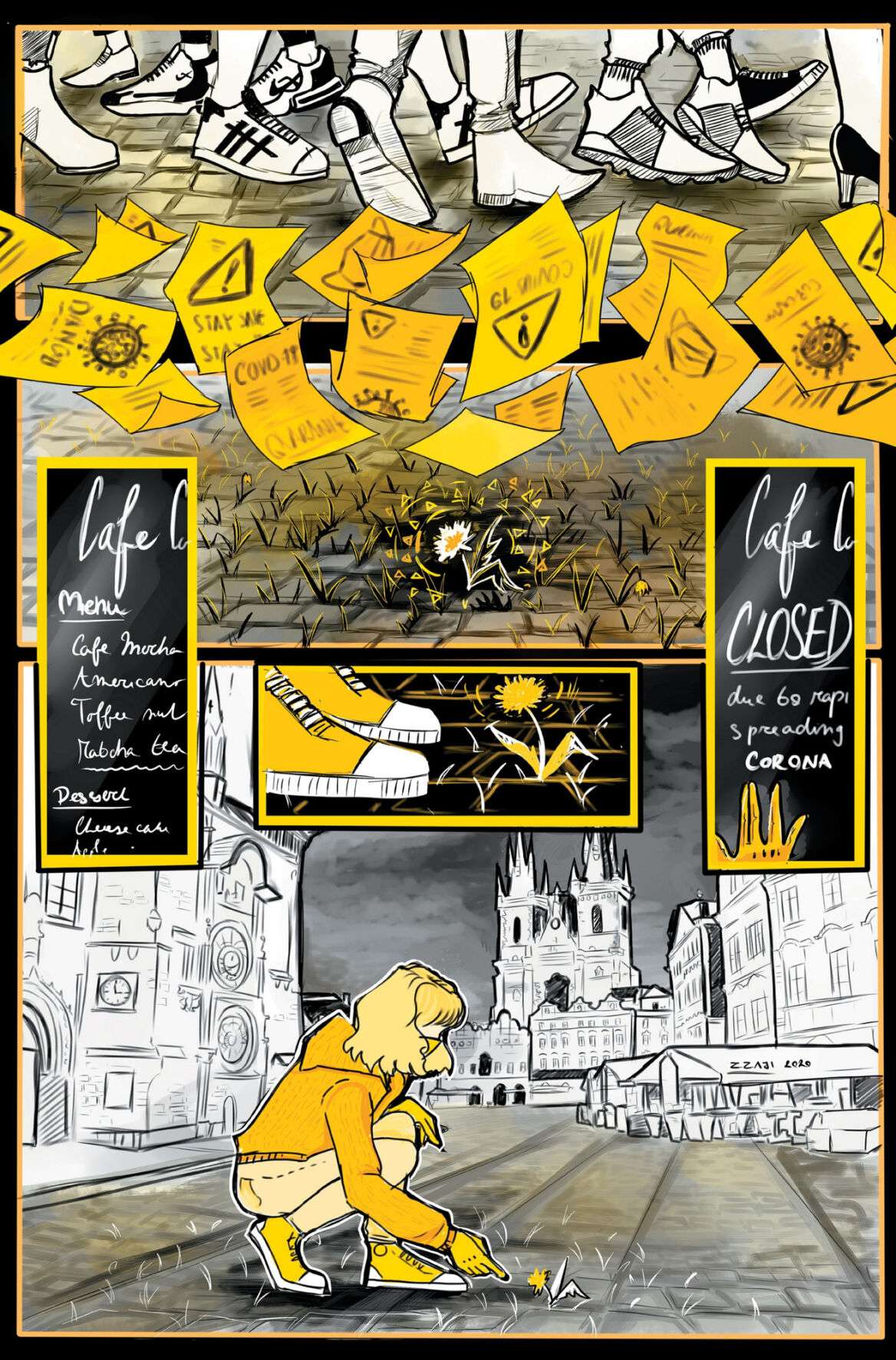 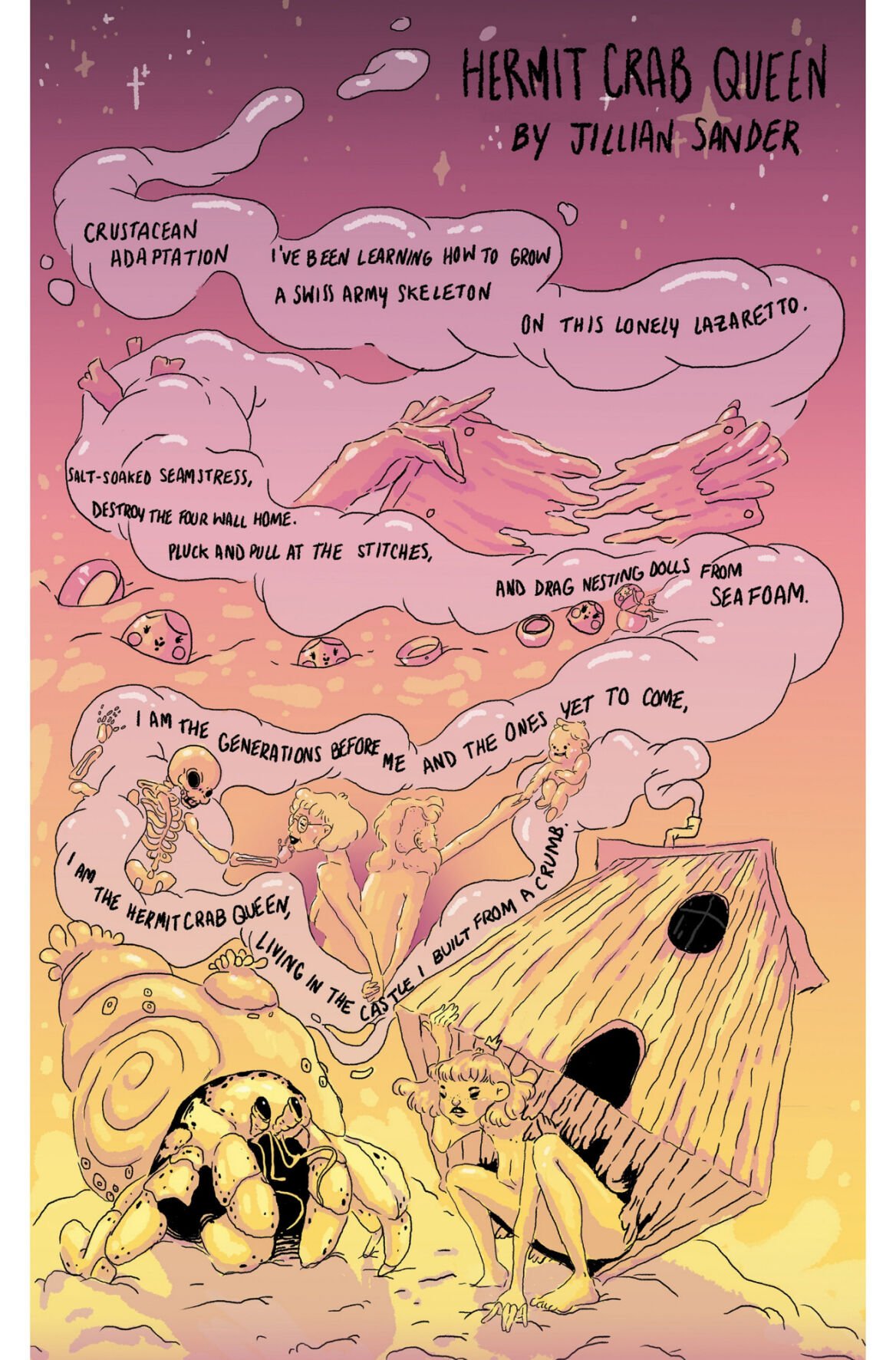 Last spring, the Art Students League of New York — the country’s oldest independent art school, which had been centered in a landmark building on 57th street in Manhattan before the creative hub shut down with the rest of the city — found members effectively separated, said communications associate and content specialist Andrew Drilon.

Wanting to provide a venue for artists to show their experiences of the COVID-19 pandemic in the medium of comics, the League made an open call for submissions to “This Quarantine Life: A COVID-19 Era Comics Anthology,” a free, digital publication Drilon and others hoped would provide some comfort.

“We’re all so inundated by the news cycle of 2020 that it can be overwhelming, but these events are different when filtered through the personal hand of an artist. That can be cathartic for both the artist and the reader,” said Drilon who acted as managing editor for the anthology. “We believe that art is one of the most important lenses through which society views itself, and this is an important time in history. The book was a way to document the turbulent period of 2020 and connect the League even in quarantine.”

Jamal Igle, Inkpot Award-winning artist and League alumni, said comics are the perfect medium for a young, burgeoning storyteller because there’s an immediacy to it that you don’t have with film or prose.

“We’re in a time that most of us, myself included, have never been through. An undertaking like this is a bit like art therapy,” Igle said. “It’s an opportunity for the students to dig deep within themselves and their feelings about this ongoing disruption in their lives.”

Sofia Bahamon, a 17-year-old artist from New York, submitted a comic to the anthology after Ian Pasetsky, who teaches cartooning at High School of Art and Design in Manhattan, offered extra credit to students who submitted a piece.

Bahamon submitted a digitally drawn monologue comic. Now, she is one of 76 artists-in-quarantine featured in the Art Student League’s first-ever comic anthology.

She was also selected to participate in the “This Quarantine Life: Facebook LIVE Event,” which was held in November.

iGeneration Youth caught up with Bahamon ahead of the event to learn about her comic, the anthology and more.

Hope Kahn: Can you tell me about your background as an artist?

Sofia Bahamon: Well, I’ve been drawing since I was a kid, like any other artist will tell you. I started wanting to do it a bit more professionally — to do it as a career — probably in sixth grade. Right now, I’m in the High School of Art and Design studying cartooning as a major. That’s kind of what my style of art has been, cartooning, illustration. I wanted to dabble with animation, but that’s something for college in the future.

Hope Kahn: What was the process of coming up with your idea and creating it?

Sofia Bahamon: The assignment was to do something like a monologue of what your opinion of quarantine is. That was a general topic. You could go as specific as Black Lives Matter, goes political, or maybe as emotional. In my comic. I went more emotional. I essentially opened a Google doc and just typed what came to mind with the idea of quarantine. That was my original monologue. It was the original way of how I wanted the layout to be. I chose a specific part of that page and went with it. It was the part I wanted to draw the most attention to and something I wanted to have more fun with.

Hope Kahn: What was it like finding out your comic was selected to be in an anthology?

Sofia Bahamon: I’ve applied my comics to competitions before and they’ve never really worked out, so I had that impression going in. When I heard about my comic getting accepted, it was huge news in my household. I was so excited. I was so thrilled and just the idea that my comic is going to be in an anthology and I’m this young, 17 years old, it’s mind blowing to me.

Hope Kahn: I know the comic reflects your kind of quarantine life. So what does your typical day look like as an art student in quarantine?

Sofia Bahamon: Well, it’s a lot of sitting down. I originally went to my living room and my dining room area, and I would just work there because it was closest to my brother and it was closest to my dad because I figured that that kind of closeness helped. And during school, during the drawing and as a typical day, I would just go here where this is my room and work on some sketches and get some sketches down.

Hope Kahn: What themes did you see running through comics? What can we learn about how young people are coping with the pandemic through their comics?

Sofia Bahamon: Some themes I’ve noticed is this sense of general understanding that “Yes, this is something that is such a historical moment that is impacting millions of lives, so here’s how I feel about that.” This anthology was such an open space. Some of the comics weren’t even on Earth, which I found to be pretty funny. What you can definitely see and learn from younger people is that we have a lot of emotions and thoughts and ideologies and even though that seems like a given, a lot of older people still don’t really know that. We’re trying to tell people how we feel, we’re trying to let people know what we think about what and it’s okay if someone disagrees. That’s the beauty of opinions. But it’s not OK to ignore us because we can’t vote yet.

Hope Kahn: Which are your favorite two or three comics in the anthology and why?

Sofia Bahamon: My personal three favorites had to have been Postcards from the Pandemic by Violet Kitchen, Open Up Your Eyes by Zuzana Matysova, and Hermit Crab Queen by Jillian Sander. They all have this uniting color scheme, and to me, they worked to the strengths of what comics can look like. Postcards from the Pandemic is a beautiful flow of the single perspective that is her own thoughts, and the artist made understandable backgrounds around it. Same with Hermit Crab Queen, but they used poetry which I’m a sucker for. Open Up Your Eyes didn’t even have spoken words! But you can understand it, and the shade of yellow is amazing.

Hope Kahn: How do you think that the COVID-19 pandemic has affected you as an artist?

Sofia Bahamon: I’d definitely say that my art has improved a lot because I’ve spent so much time doing the art here, drawing every day and being able to adapt my art into new styles. I looked at different videos and different artists, and discovered ones I’d never seen before, which is thrilling. That’s kind of what my quarantine and what COVID have done for me as an artist — improving my art, which is good upside in all this negativity.

Hope Kahn: How does it feel to be a part of this collective anthology?

Sofia Bahamon: Amazing, because first off, this was the first-ever anthology that the Art Students League has done, which is thrilling in it of itself for my comic to be officially a part of the first anthology. To flip through and see all these experiences. It’s amazing to see these people that are expressing their experiences and what they went through. And whether it be political, emotional, or just maybe something comical, it’s amazing. All of it is a valid way of expressing the art. I felt included. It was such a blanket. That’s the best way I can say that. The whole anthology felt like a blanket and it was great to be a part of the cuddle fest.

Hope Kahn: What do you want people to take away from the anthology?

Sofia Bahamon: That there were different people that incorporated this, that put this together and that every comic highlighted something different about what happened in the quarantine. That’s the beauty of storytelling. That’s not only our story, but the stories of other people. I want someone to know that different experiences happen and whatever experience you had during quarantine is just as valid as the next.

Hope Kahn: What about the fact that this was made by teams and by people who are young?

Sofia Bahamon: Having that experience and that opportunity to be able to show our voices and what we’ve collectively experienced, because in this quarantine, the entire topic of activism has been on everyone’s minds. This is definitely a form of activism because you show these experiences and you tell them, you tell the stories and you show the art and you show the magnificence of dancing, or you show the tragedy of what happened to people who are Asian in this quarantine. So that form of expression, that’s a form of activism. The fact that there were students who were incorporated in this collective, this anthology, was incredible because it shows that the experiences that we had or they had, it was universal.

That if a person who’s older looks at it and says, “Oh my God, this was me,” or “This is what I related to,” and realizes that it was a student, that becomes universal. That becomes something of an experience, a collective experience. And it’s even cooler when kids do it.

The book is available as a free digital download on Apple Books and on Dropbox. Find more information on The Students Art League of New York’s website at wdt.me/quarantine_comics