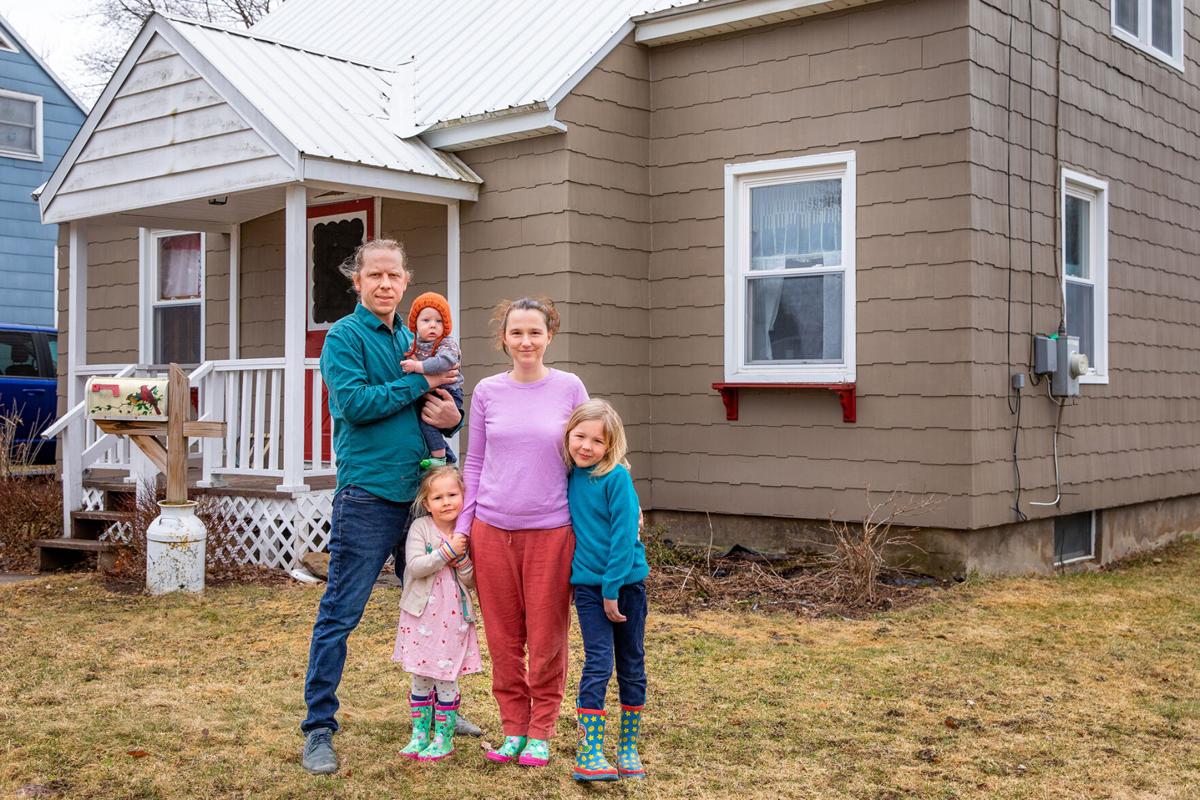 The Chirico family stands for a photo in their Watertown front yard, from left, father, Patrick A.; 6-month-old Wilder B.; Waverly V., 3; mother, Brittany A. and Wellesley G., 6, on Wednesday, March 24, 2021. Kara Dry/NNY Business 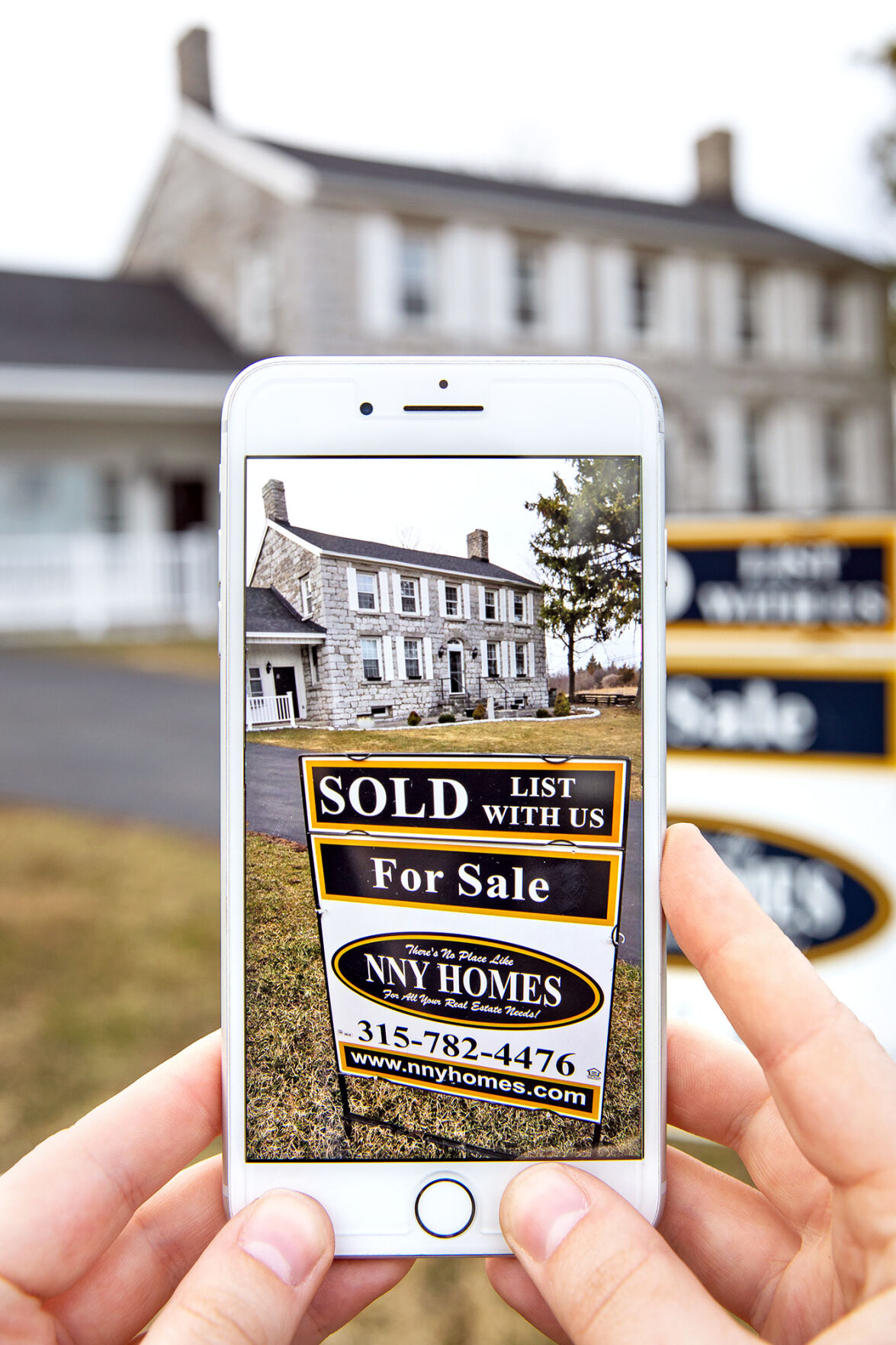 The Chirico family stands for a photo in their Watertown front yard, from left, father, Patrick A.; 6-month-old Wilder B.; Waverly V., 3; mother, Brittany A. and Wellesley G., 6, on Wednesday, March 24, 2021. Kara Dry/NNY Business

Patrick Chirico almost immediately sent his pregnant wife and two small children from their Brooklyn apartment to live with her mother in Watertown when the pandemic hit in February 2020.

Knowing that his family was safe, he stayed behind to do his part during those early days of COVID-19 to help make sure the medical community got some needed personal protection equipment when he worked on a project to manufacture 500,000 facial masks.

Once that work was complete, he returned to his hometown, where he joined his wife Brittany and 6–year–old son and 3–year–old daughter in July. Two months earlier, they purchased their first home, a three–bedroom Cape Cod–style house in Watertown.

Despite the pandemic, many people in the north country purchased homes, especially during the last quarter of 2020 when home sales skyrocketed.

The housing market boom is happening despite the ongoing COVID-19 pandemic and because of it, said Lance Evans, executive officer for the Jefferson–Lewis and St. Lawrence Board of Realtors.

For the Chiricos, they might not have ever made that life–changing purchase if it weren’t ironically for the pandemic and that move back home.

“I didn’t think we’d ever own our home,” Mrs. Chirico said.

The north country real estate market has never seen a year like this past one, according to Mr. Evans. It started last March with the state closing the entire industry down for two months due to COVID safety concerns.

“This year was a weird, extraordinary time. We’ve been saying that this year is like no other,” he said, adding that he thinks the fourth quarter jump can be attributed to several factors,

Interest rates continue to be low, allowing buyers to be able to afford to buy a house, said Desiree Roberts with Lake Ontario Realty in Chaumont. The lower interest rates also help buyers get more bang for their buck, so they can purchase nicer homes.

Because of lower interest rates, the real estate market is doing well and homes are selling. Right now, it’s a seller’s market. Inventory is down, said Jennifer Flynn, an associate broker with Bridgeview Real Estate Services in Watertown. And sellers are also getting more money for their homes.

“It’s that supply and demand thing,” Ms. Roberts explained. “Demand is up.”

As was the case for other times of the year, waterfront properties continue to be popular along the St. Lawrence River, Lake Ontario and inlet streams, local Realtors said.

Some of those transactions were the result of vacationers liking the north country so much that they decided to buy summer homes or make the region their permanent home.

There were some buyers who were tired of living and working in big cities. They ended up liking the small–town atmosphere of places like Alexandria Bay, Cape Vincent and Sackets Harbor, Realtors said.

And they didn’t have to leave their jobs behind. With the pandemic, companies allowed them to work remotely from their new homes in the north country.

Moving into their dream house didn’t mean that Brittany Chirico had to change jobs. She continues to work for a company as a website designer. The company closed its New York City offices and all of its employees also work from their homes.

She does almost all of her work from the kitchen table, while the young family lives its life during the pandemic. While their folks live a short distance away, their only contact is through seeing each other outdoors.

Mr. Chirico acknowledged that they live by “real strict COVID rules” and that their families have not visited inside their dream home yet.

“We just want to keep the family safe,” he said.

Mr. LaJuett, who grew up in the town of Brownville, arranged to keep his job with the U.S. Department of the State in Washington, D.C., and work from his new home along Wilson’s Bay.

He wanted to move back to the north country, where he still has family.

He has settled into the three-bedroom Cape Cod-style home that sits on two acres overlooking a view of the lake.

“It’s nice to wake up and be right on the water,” he said.

“It was everything he wanted,” she said.

It was such a good move to be back in the area where he hasn’t lived since before his days at Syracuse University 30 years ago that he decided to retire from the governmental job he had for 20 years.

Expensive waterfront properties that would normally be on the market for two, three or four years were also doing well. Ms. Roberts sold several $1 million-plus homes, she said.

Working mainly in the Alexandria Bay area, she said homes in the $110,000 to $130,000 range also sold well. Mrs. Ruggiero noticed that three- to four–bedroom houses on two to five acres in the town of Watertown went quickly this past fall.

In St. Lawrence County, where Massena, Ogdensburg, Canton and Potsdam have different housing markets, the low interest rates helped increase sales by 25%, said Brittany Matott, president of the St. Lawrence Board of Realtors.

But the Canton and Potsdam market continues to be where people look for homes because of the four colleges and universities located there, she said. St. Lawrence County residents are also looking for houses outside of villages to avoid paying extra property taxes, she said.

While some home buyers move to the north country, Matthew R. Jobson and his family wanted more land, so they sold their Alexandria Bay home in September and moved just outside of the village.

After living in the village for three years, Mr. Jobson and his wife, Keri, decided it was time to find a place outside of Alexandria Bay that offered more land for their 8–year–old daughter, Audrey, and the family’s two dogs.

They sold their century–old, four-bedroom house with a small yard at 12 Bolton Ave. for $140,000 in June, with the hopes that they could move right into their new manufactured home on Route 26 in the town of Alexandria.

But issues with getting building materials caused by the pandemic delayed the move into their new home for weeks and they had to stay with relatives. They finally got into the 1,500-square-foot house in September of last year.

Some of the big numbers in housing sales during the fourth quarter could actually be attributed to delays in closings from the third quarter, Mr. Evans said.

That happened quite a bit with Fort Drum families who were supposed go on to new assignments at other military installations, Mrs. Ruggiero said. Their transfers had to wait for a few more months.

As a result, deals had to be called off for their homes and those military families had to find new buyers.

For Watertown residents Kathie and James Strader, it was a matter of downsizing from their 16-room house at 252 Paddock St. after living there for 26 years.

Mrs. Ruggiero found the home Mr. and Mrs. Strader sought with the first one that she showed them. Their old home just got to be too much to take care of, Mrs. Strader said.

They were in their new, three-bedroom home at 352 N. Indiana Ave. in time for Thanksgiving.

The people who bought their Paddock Street home — which was on the market for a few years, but went quickly during the pandemic — were tired of city life in Baltimore and got new jobs in the north country. Mrs. Strader and her husband left some of their furniture and belongings for them.

The new home is big enough to continue having their six great-grandchildren over for sleepovers.

It’s where they can make new memories, she added.