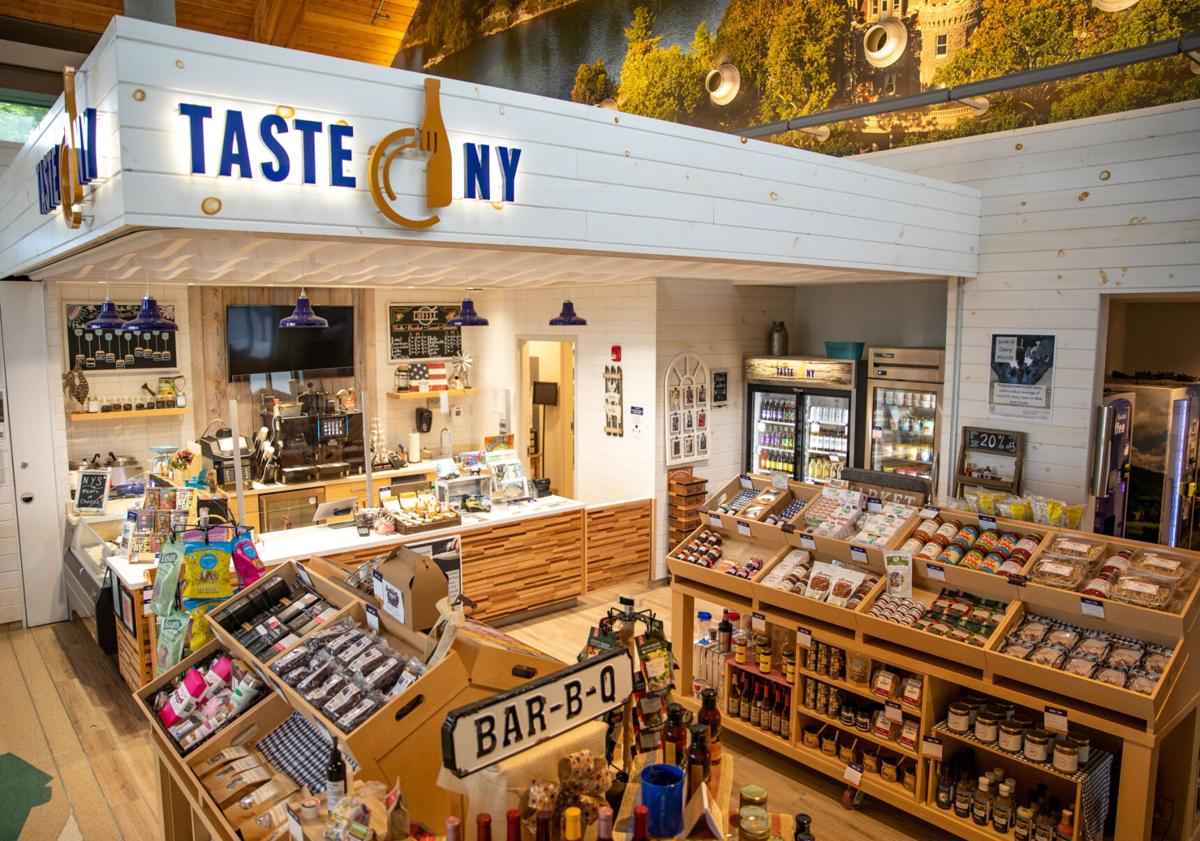 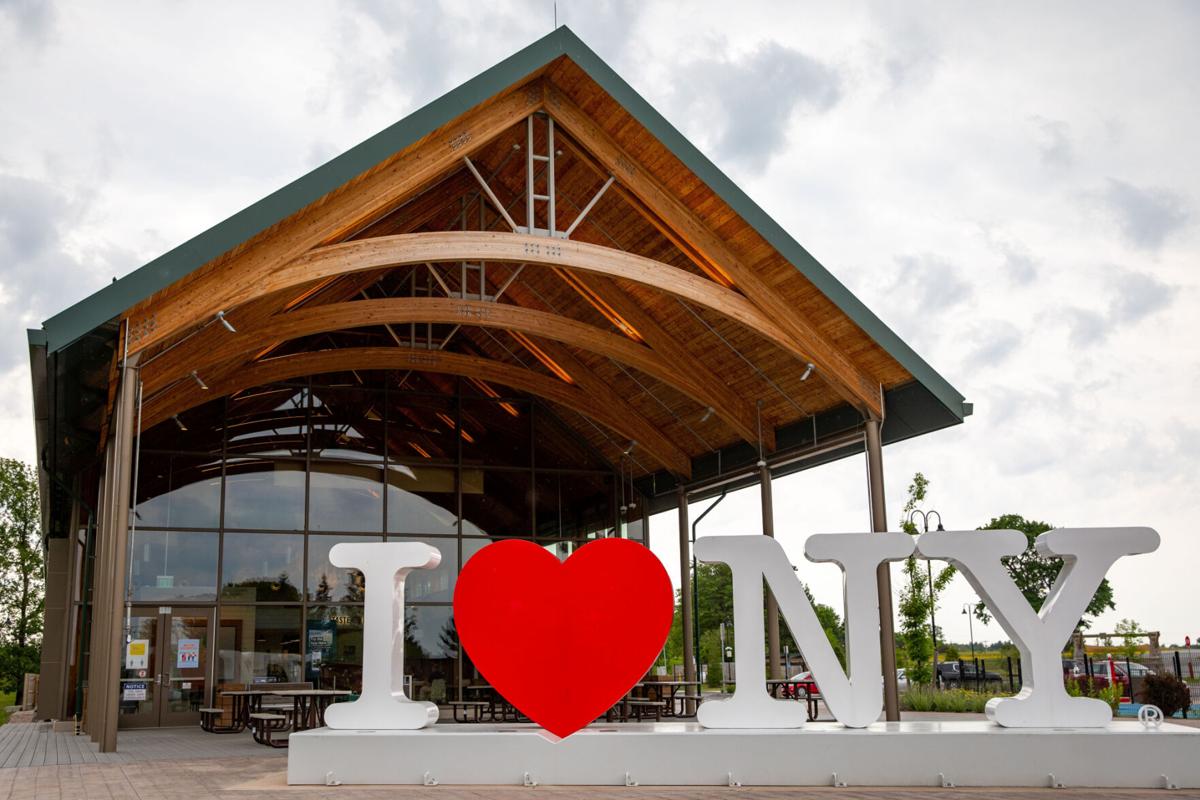 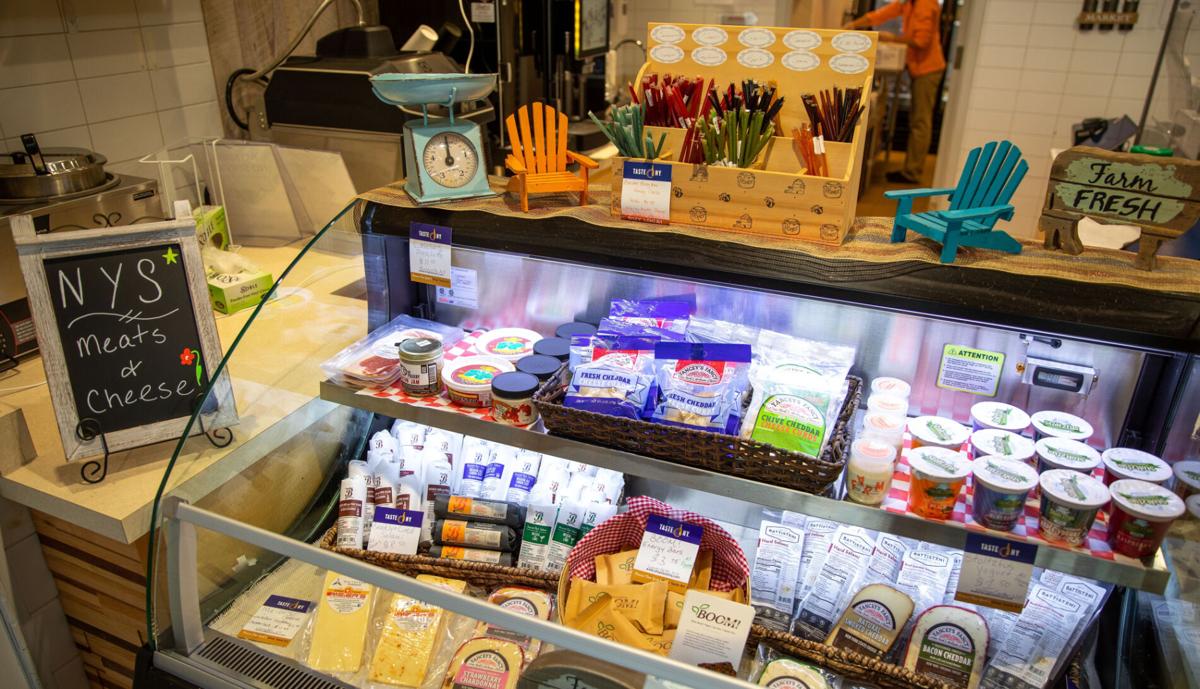 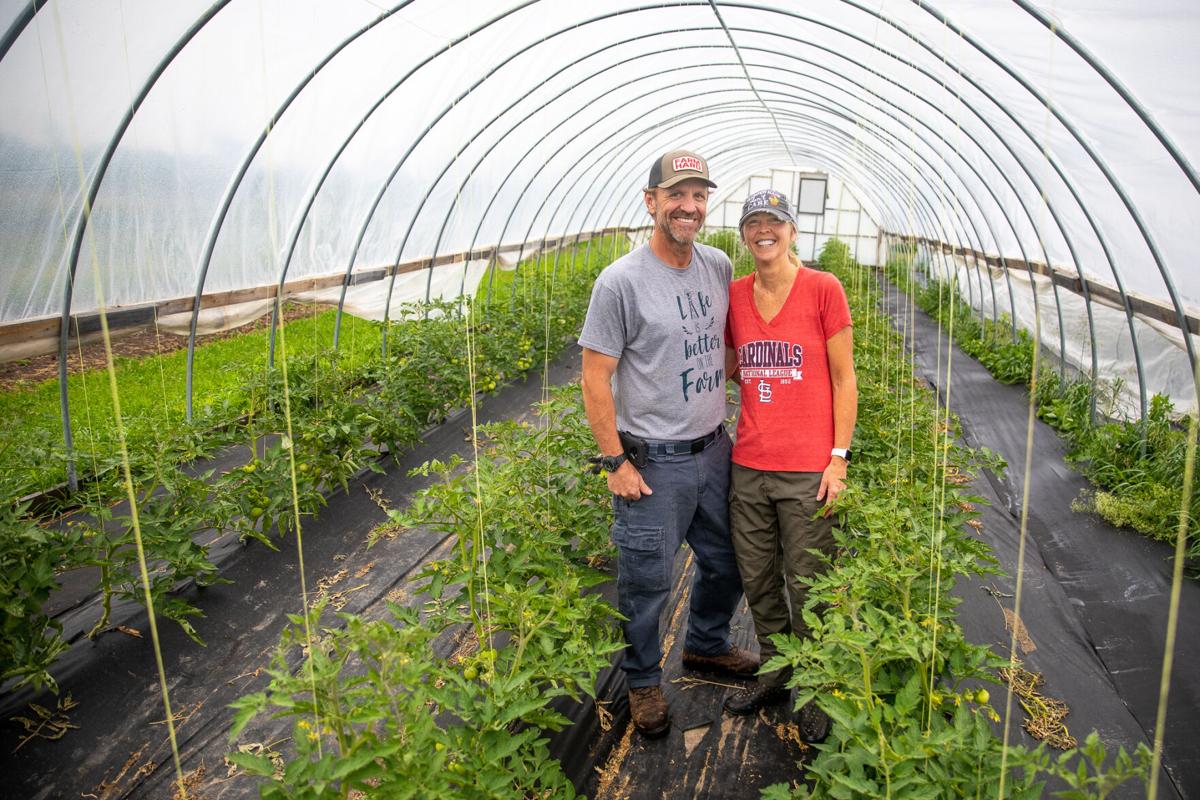 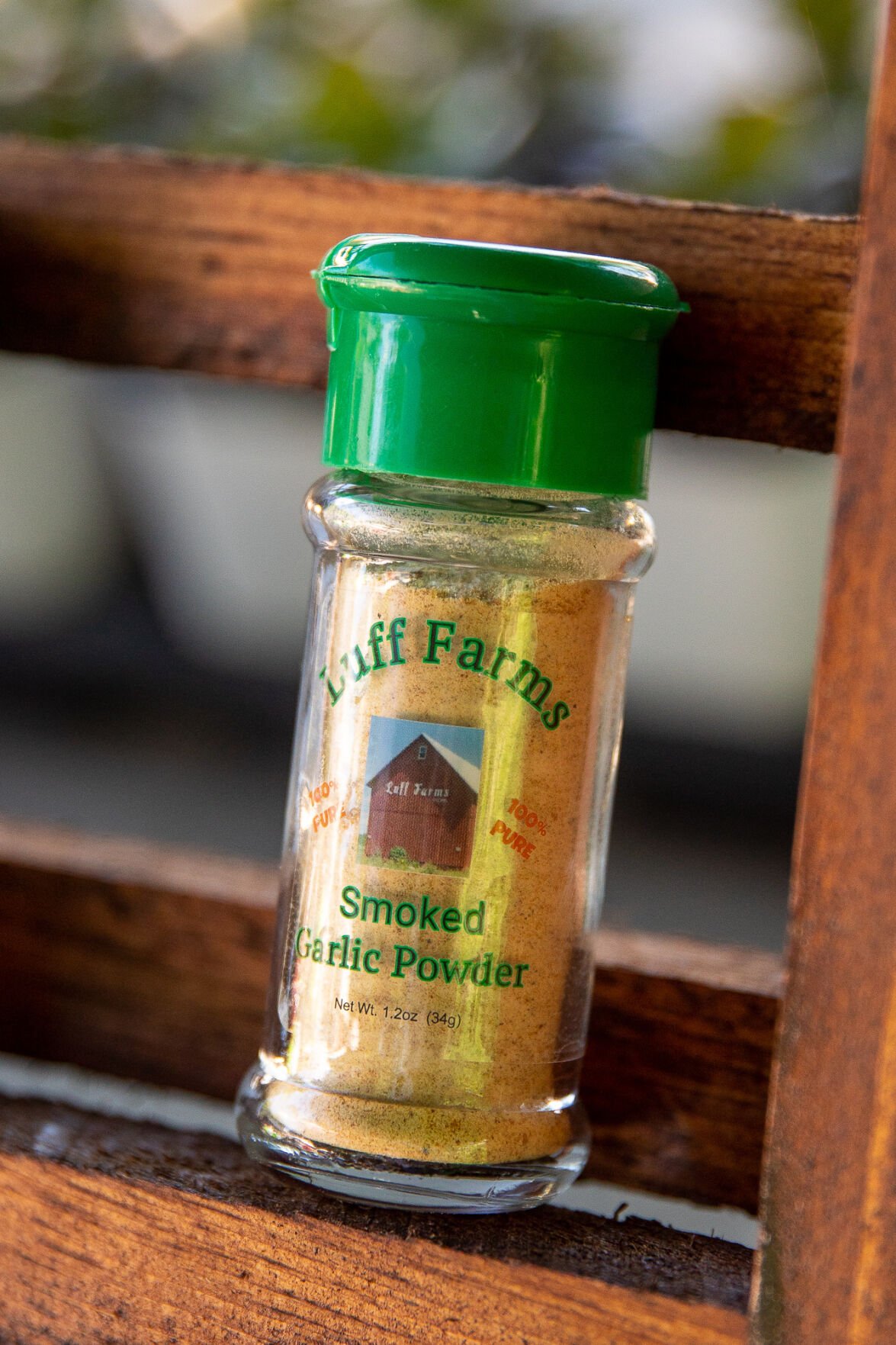 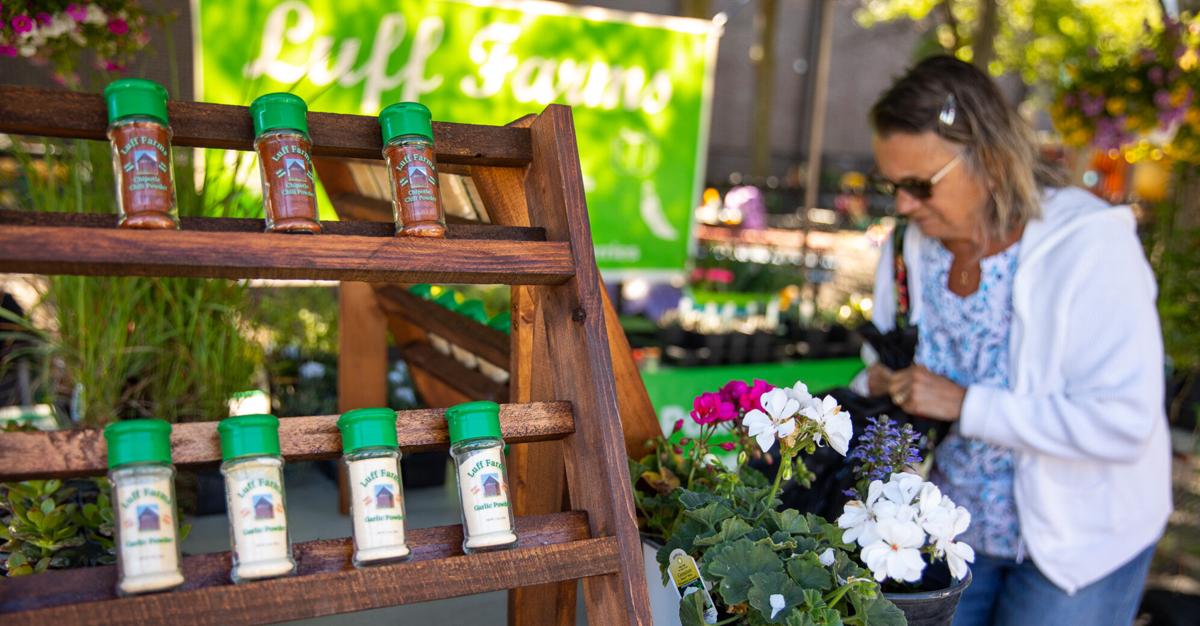 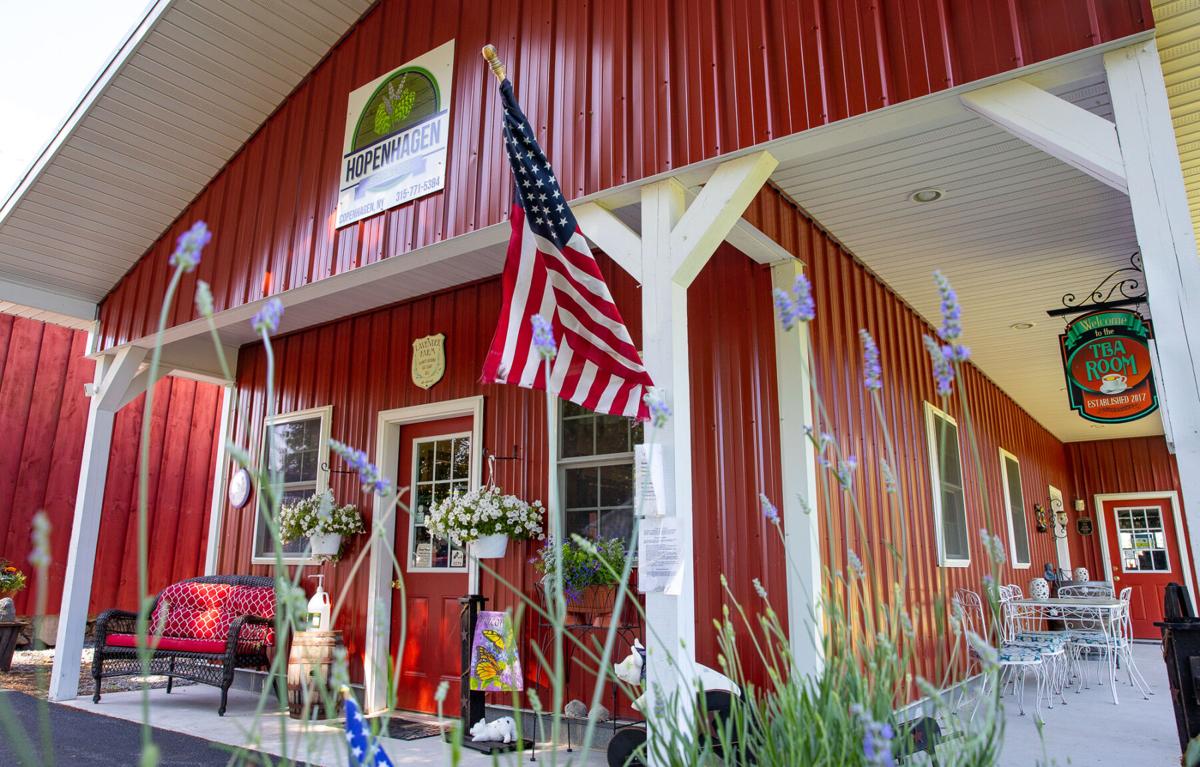 The storefront and tea room at Hopenhagen Farm in Copenhagen. Kara Dry/NNY Business 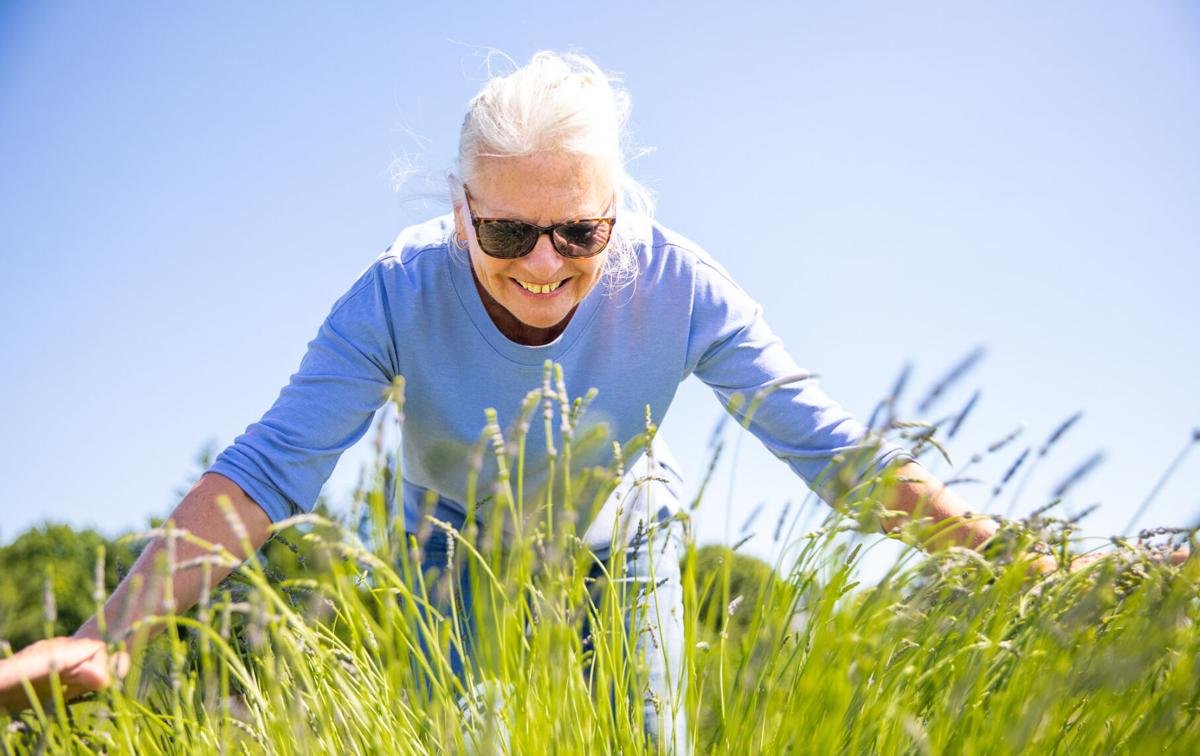 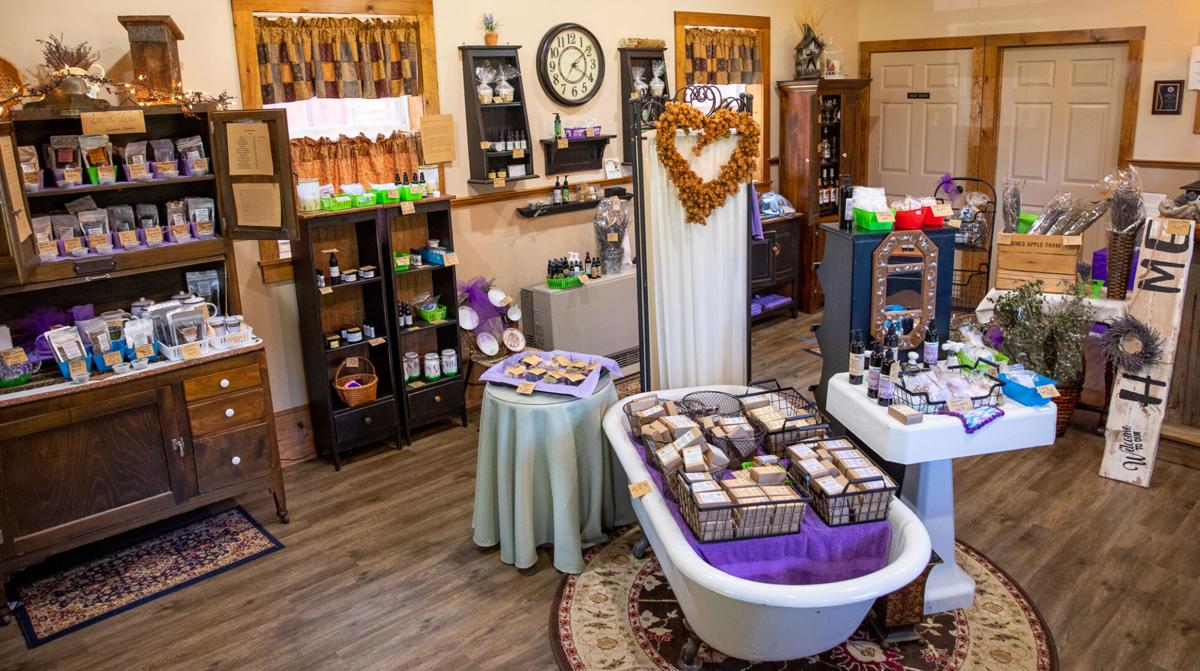 Though persistently experimental, Hopenhagen Farm co-owner, Mary Rumble, has conjured many best-sellers out of her lavender and hops harvest in Copenhagen. Kara Dry/NNY Business 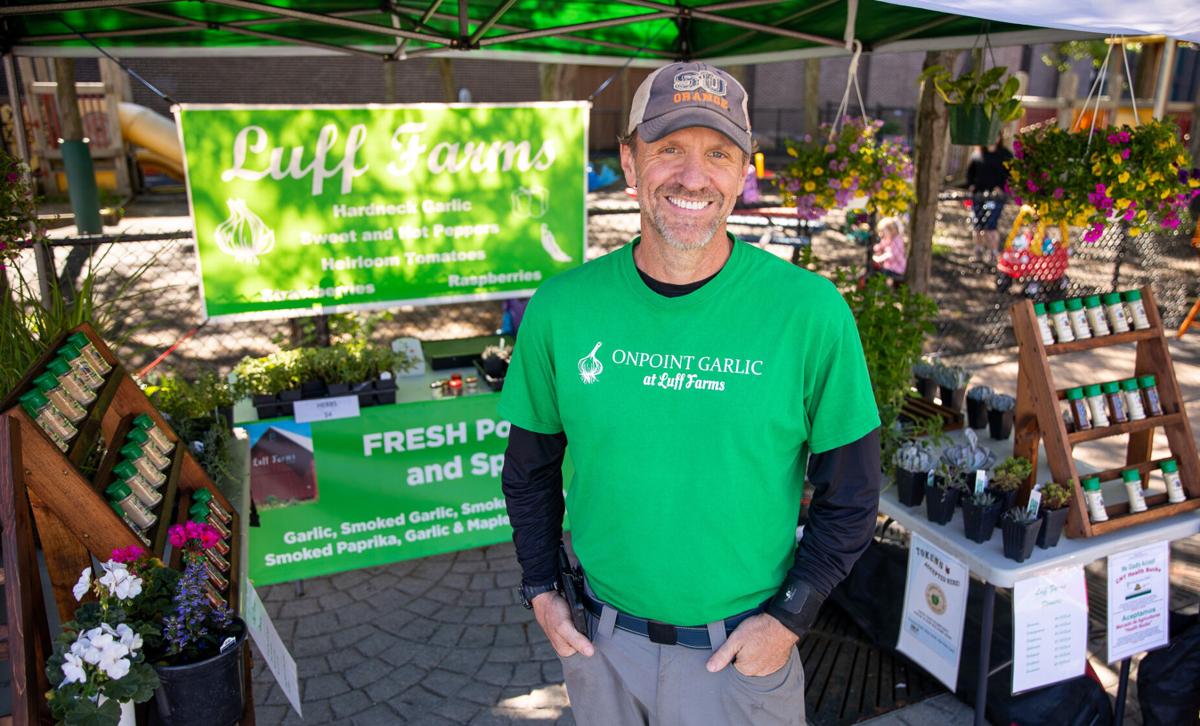 Luff Farms co-owner, Kurt N. Lanning, of Three Mile Bay, stands for a photo at his booth at the Watertown Farm and Craft Market in Watertown. Kara Dry/NNY Business

The storefront and tea room at Hopenhagen Farm in Copenhagen. Kara Dry/NNY Business

Though persistently experimental, Hopenhagen Farm co-owner, Mary Rumble, has conjured many best-sellers out of her lavender and hops harvest in Copenhagen. Kara Dry/NNY Business

Luff Farms co-owner, Kurt N. Lanning, of Three Mile Bay, stands for a photo at his booth at the Watertown Farm and Craft Market in Watertown. Kara Dry/NNY Business

Cognizant of the importance of local produce, the state of New York is dedicated to connecting farmers directly to consumers in any way it can, be it with marketing, grants, product testing and more. Two programs that directly support this connection effort are the New York State Grown & Certified Program and Taste NY. These programs also allow for the shopping of New York state produced goods, both in store and online.

Locally, there is a Taste NY market at the North Country Welcome Center in Alexandria Bay. All products sold in the Taste NY market are produced in the state and the store boasts a range of local products representing the region. Guests to the market can enjoy fresh breakfast food items and a variety of beverages from May through December, and from January to April, they can enjoy snacks and beverages from the vending machines. There are also products for sale that aren’t for consumption, but are still meant to be enjoyed.

Through New York State Grown & Certified, farmers are able to get their products certified with a special logo that helps to market these local New York products to consumers, and many involved with the program have items for sale in Taste NY stores. Two local producers, Hopenhagen Farm in Copenhagen and Luff Farms in Three Mile Bay, have utilized these programs to increase profitability and exposure.

Hopenhagen Farm came into existence as a way to use their farmland after Mary M. Rumble and her husband, DeVere, retired. The two successfully planted Cascade and Newport hops in the spring of 2014, and decided to start growing lavender in 2016. Crystal has since been added to the hops list, and they now have about 1,800 lavender species, according to Mrs. Rumble. They added two new lavender species just this year.

In May 2017, the two opened a specialty store at the farm, which specializes in hop and lavender products including a line of soaps, grooming products, a children’s line and pet supplies. In 2018, an Aricle 20-C food licensed kitchen was completed and The Tea Room opened, a room for events and tea parties. Article 20-C Food Processing Establishment licenses apply to food manufactures, processing plants, wholesale bakeries, and retail food establishments (i.e. grocery stores) that conduct any type of food preparation including but not limited to meat and cheese slicing, heating foods, sandwich making, operating beverage dispensing machines, and preparing sushi, salad bars, or other ready-to-eat exposed food packaging activity. The 20-C kitchen enables the drying of lavender for culinary purposes.

In October of 2018, Hopenhagen became a participant of New York Grown and Certified, and some of their products are now offered in the Taste NY stores in Jefferson, Sullivan and Duchess counties. At the moment, only the non-edible bundles of lavender and the hops have the New York State Grown & Certified seal, Mrs. Rumble said.

Through the program, the Rumbles applied for a grant, which, after it was approved, allowed them to purchase a hop dryer.

“I had a system of racks that I set up in our garage, and to me it was not efficient, it wasn’t uniform,” Mrs. Rumble said. “I just felt like to make sure my product met the state standards and I felt comfortable with it too, the dryer was just a godsend.”

She noted that the dryer allows her to be able to keep everything in one place and control humidity and heat right then and there.

Through the New York Grown & Certified program, the farm’s reach has expanded, but it also had its own marketing opportunities, mainly the annual Lavender Festival. This year’s event was held on Saturday, July 10. Mrs. Rumble said there would be about 70 food and craft vendors, so it’s was a big day.

“Once you get involved with the program, it opens up so many opportunities for your business as far as advertising and getting help,” Mrs. Rumble said. “I just think being able to put that sticker that says we’re New York Grown & Certified makes a difference to people.”

She continued by saying she thinks producers should seize every opportunity that you can to get yourself and your products out there.

Producers and consumers both benefit from programs like Grown & Certified and Taste NY. Producers as far as giving them exposure, marketing is a great tool that both programs utilize, and Taste NY has a retail space dedicated to showcasing products.

According to Michael P. Myers, Taste NY market manager at the North Country Welcome Center in Alexandria Bay, the mission of Taste NY is to get exposure for vendors and promote New York state agribusiness.

“Grown & Certified lets you know that these producers have safe practices that are sustainable and they’re actually grown in New York,” Mr. Myers said. “They’ve been tested, they’re monitored through the state, and they’re certified by us as being grown in New York state.”

For the Grown & Certified program, a website is set up to answer questions, walk you through the process of how to get certified, and lists requirements: https://certified.ny.gov/. In New York, you can get certified in things like dairy, beef, Christmas trees, cut flowers, honey, firewood and more, Mr. Myers said.

“They both support local and that’s the best thing to do these days,” Mr. Myers said of the programs. “The more regional and local we can buy our produce, the more sustainable our food system can be. It’s really important these days to know where your food comes from and to be able to have that connection with people.”

According to its website, the New York State Grown & Certified program makes it easy for consumers to identify local, safely handled, and environmentally responsible agricultural products. The program is a cooperative effort among producers, processors, wholesalers, retailers, restaurants, and the New York State Department of Agriculture and Markets to meet consumer demand for high-quality food and agricultural products.

Taste NY was launched by Gov. Andrew M. Cuomo in 2013, and highlights the quality and diversity of food and beverages grown, produced, or processed in New York. Taste NY locations and more program information can be found at https://taste.ny.gov/.

Luff Farms was established by current co-owner Kurt N. Lanning’s grandparents in the ‘50s. Later, once they had passed, Mr. Lanning’s mother and stepfather took the farm over, and later Mr. Lanning and his wife thought of growing garlic for a cash crop, which they started doing in 2015. He said they incorporated in 2017 and business has grown every year since, making it a possibility that Mr. Lanning and his wife to could retire from their jobs down the road and work the farm full time.

This will be the first year the farm is not going to be Certified Naturally Grown since 2017, because they opted to go with New York Grown & Certified instead. Mr. Lanning said they still follow all the rules and don’t spray anything illegal; they don’t use pesticides or anything like that on anything that they sell.

“New York State Grown & Certified has come along with the GAP certification from the USDA, and we felt that those certifications were more important; I think the way your produce is handled is more important,” Mr. Lanning said. “I was the only certified naturally grown farm between here and Syracuse, so it was really hard to get an inspector and that’s why we finally stopped- it was almost impossible to get an inspection.”

GAP stands for Good Agricultural Practices and shows that a farm handles produce correctly and follows health and safety procedures. Though the farm doesn’t have official organic certification, it practices organic methods.

The farm got the Grown & Certified distinction last September and it lasts for a year, so they’ll have another inspection there in the coming months.

Various spices and powders are something that they’ve grown into this year, Mr. Lanning said, and they’ve expanded to doing chipotle, smoked onion, habanero, and some other cool stuff. He mentioned that Taste New York is even interested in doing business with them and helping to market their products.

“I think that anytime you can put the New York symbol or designation on your products or on your signage, it’s a stamp of approval,” Mr. Lanning said. “People know that we’re being watched and we’ve been inspected, we’re expected to do things right. People coming up to us and saying, ‘Oh my god, your smoked garlic powder was life changing, it was the best thing I’ve ever had in my life,’ that’s the coolest thing.”

Do you think health officials are accurately describing the threat of the delta variant of the COVID-19 virus?