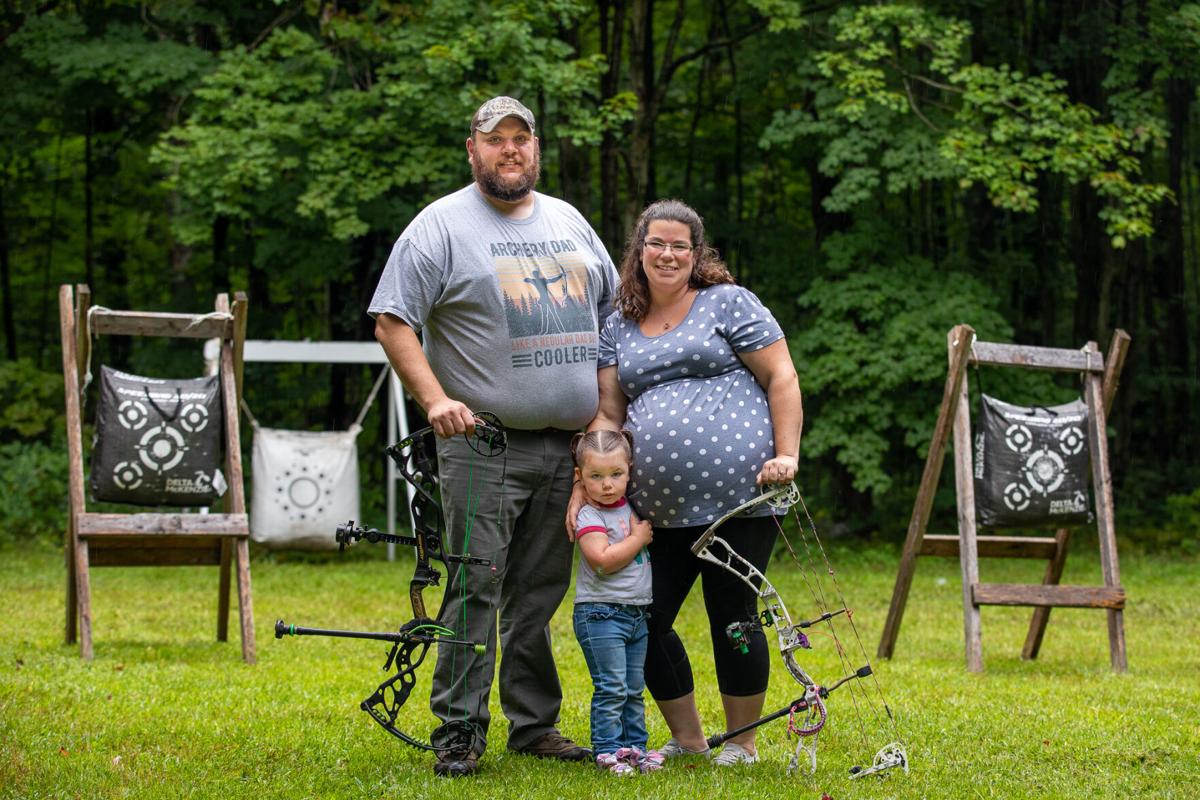 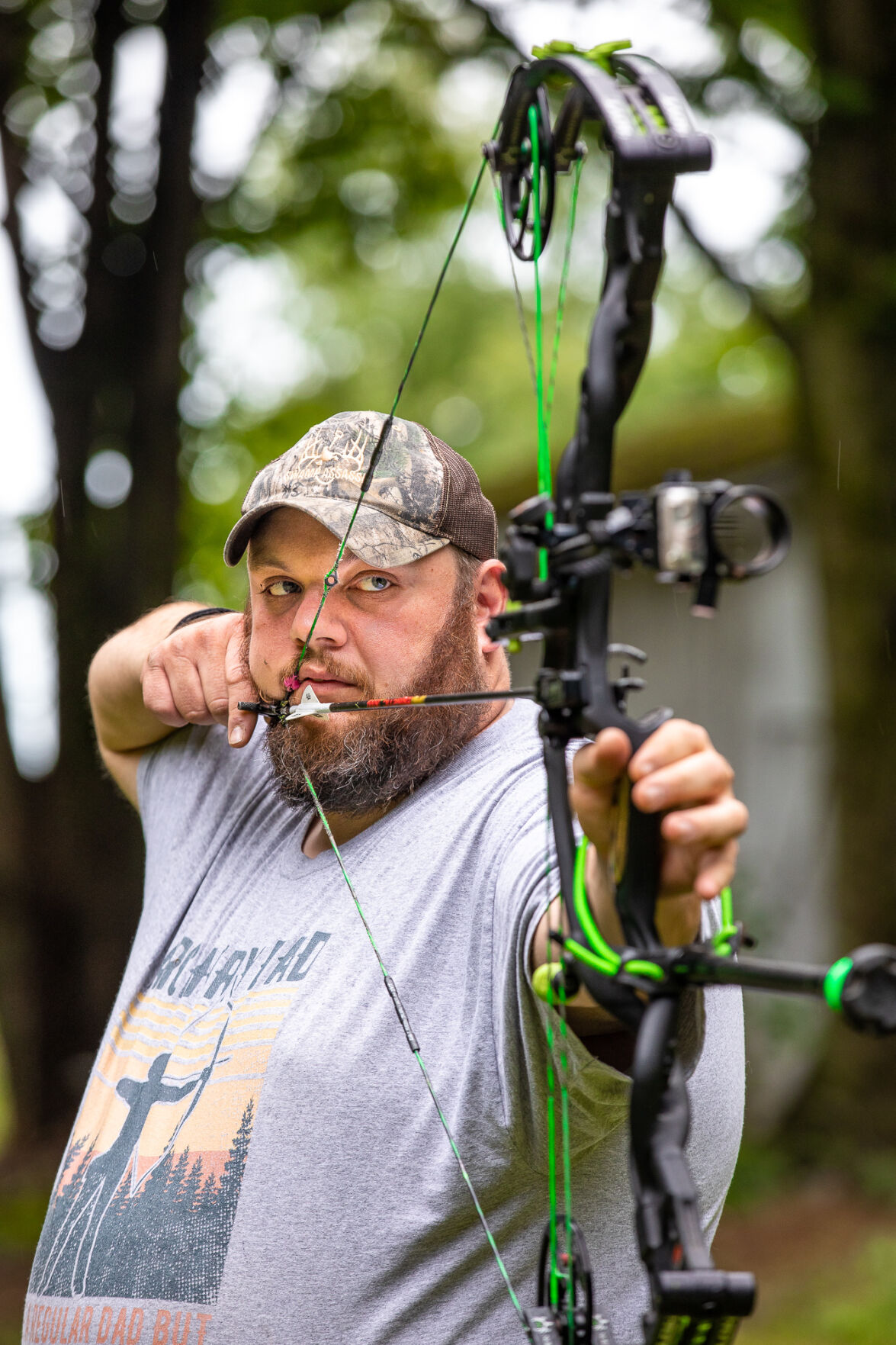 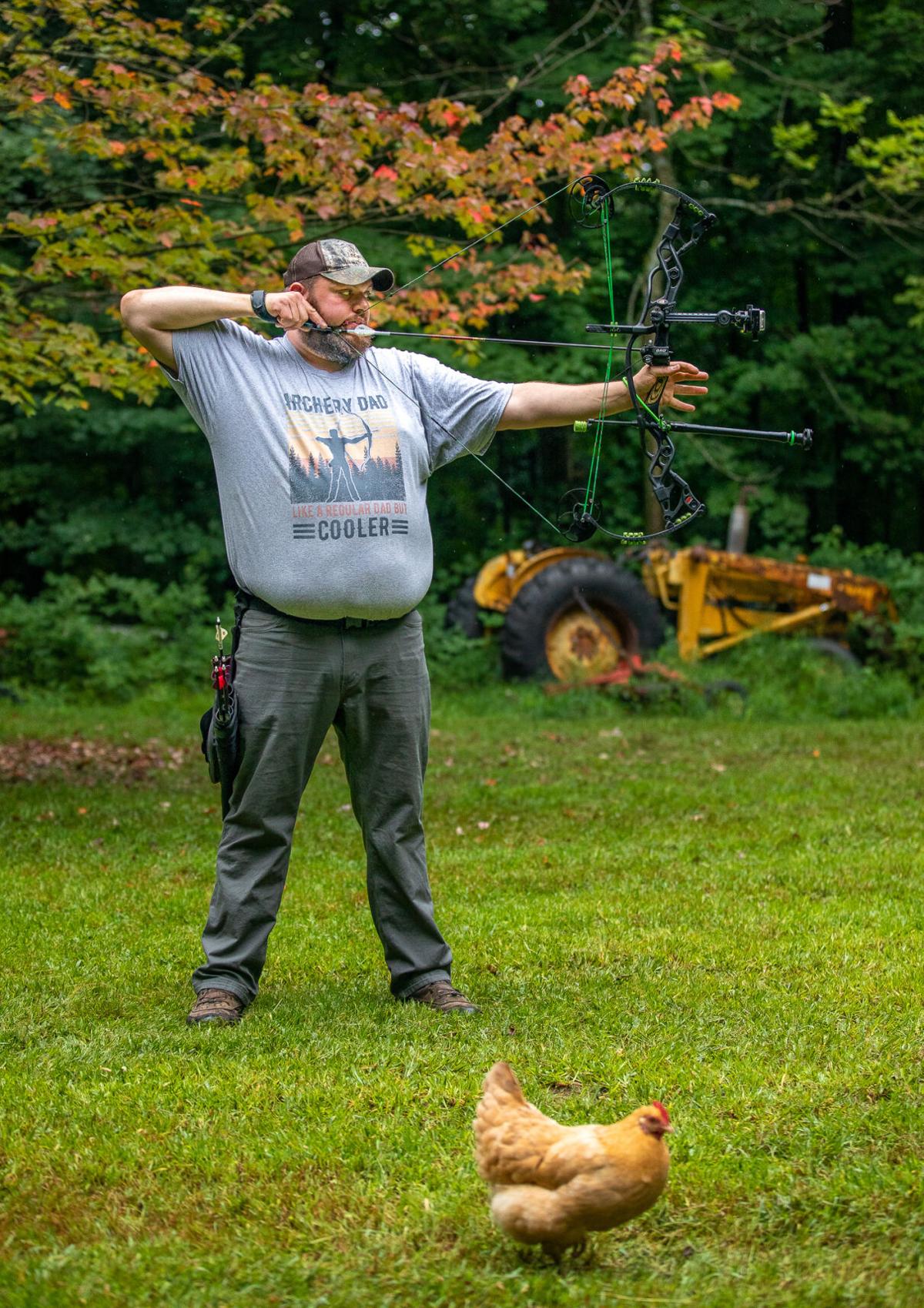 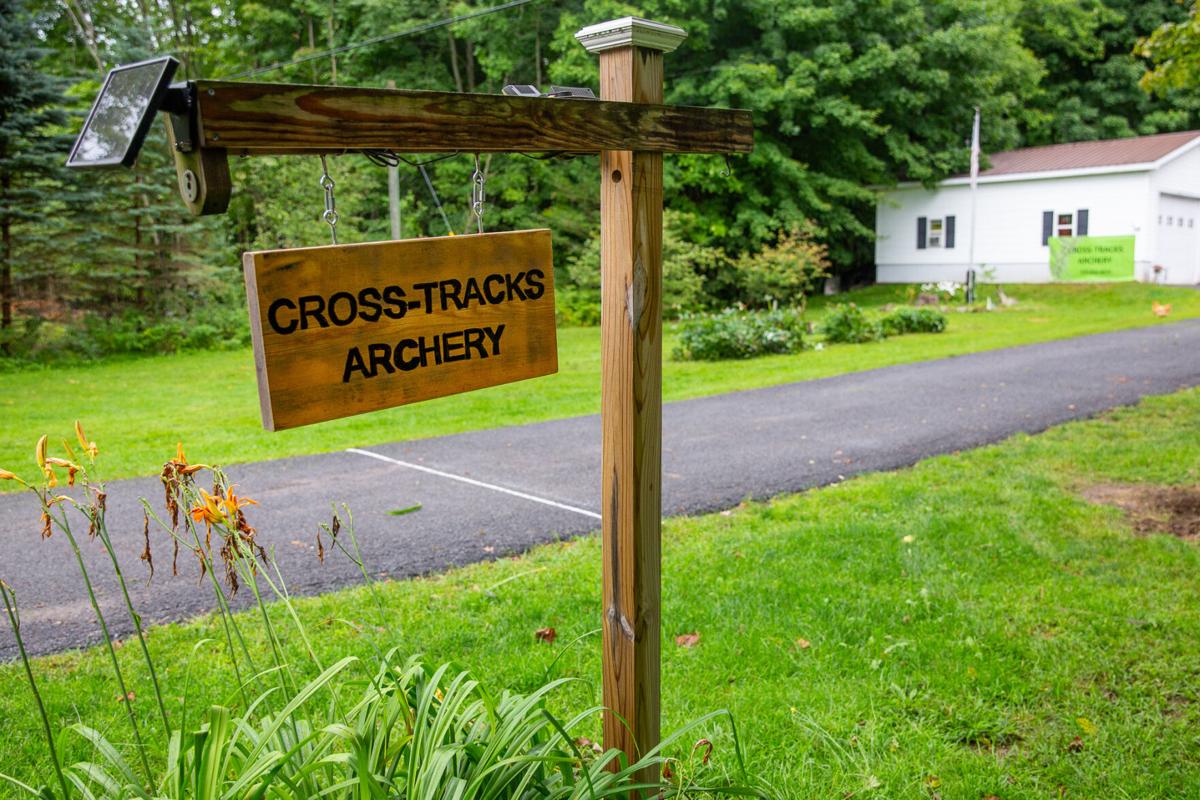 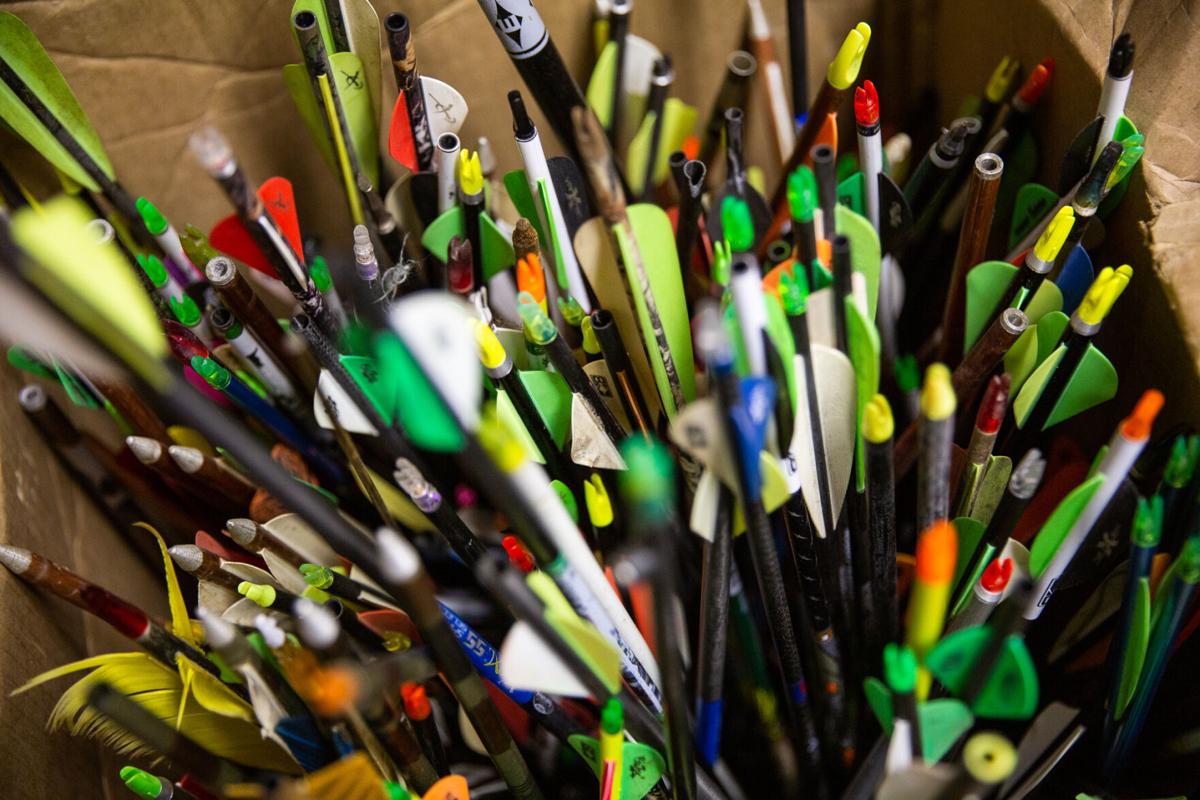 Miscellaneous arrows are stuffed in a box at Cross-Tracks Archery in Carthage. Kara Dry/NNY Business 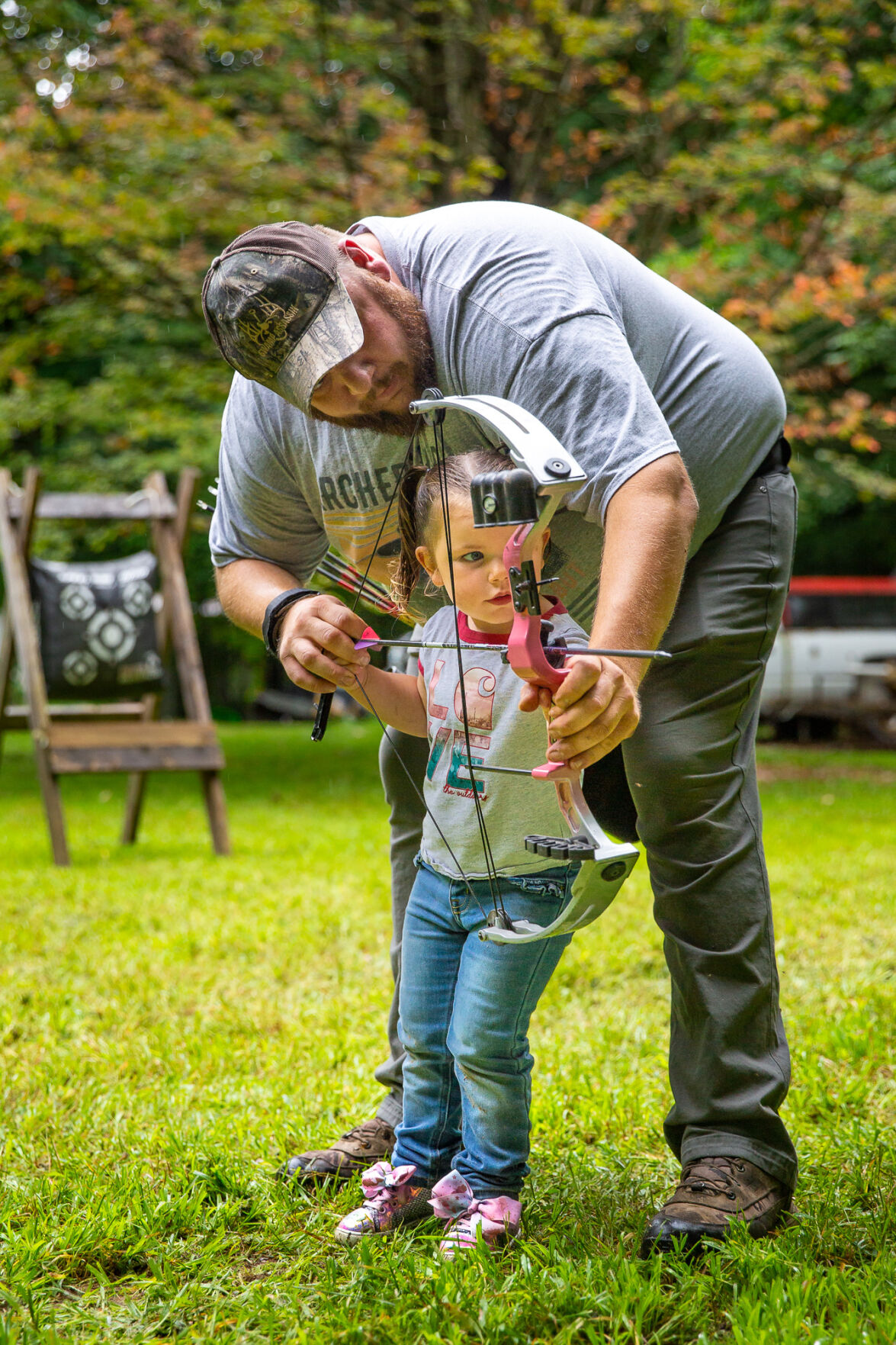 Joseph Cimarello helps his 3-year-old daughter, Joelle Cimarello draw a bow and arrow, aiming at a target on their property in Carthage. Kara Dry/NNY Business

Miscellaneous arrows are stuffed in a box at Cross-Tracks Archery in Carthage. Kara Dry/NNY Business

Joseph Cimarello helps his 3-year-old daughter, Joelle Cimarello draw a bow and arrow, aiming at a target on their property in Carthage. Kara Dry/NNY Business

From their garage on Milady Road in Carthage, Samantha Marsh and Joseph Cimarello are hoping to build a legacy in the archery and outdoor outfitters industry.

The couple runs Cross-Tracks Archery, where they sell, set-up and service any brand of archery equipment, as well as offer archery lessons. It’s a part-time business now, supported by their full-time jobs, but Mr. Cimarello said it’s proven to be a very popular store since it opened in 2017.

“I offer classes and training, offer full service to any brand of bow, I am nonbinary to archery companies,” said Mr. Cimarello.

He opened his shop after he saw a hole in the local market. A shop nearby had recently closed and the remaining option wasn’t known for its customer service.

Mr. Cimarello said his vision was to open a shop that was fair to the customer and delivered the know-how and expertise to make each visitor’s trip positive.

“I make sure I’m not ripping people off,” he said. “I’m value minded, and if I have a good deal I can pass it off to the customer.”

He said that mindset helped to developed a stable, passionate and loyal base of customers, around 100 regulars as of the summer of 2021. Most of his customers are regulars, who come in yearly to get their bows tuned or train their children.

“We haven’t really been in business that long, but I think we’re doing relatively well,” he said.

He continued to say that competitive archery comes and goes with the trends of the day, but bow hunting especially remains a regular pastime, no matter what.

There are also recreational archers, people who don’t hunt or compete but enjoy practicing their shooting and engaging with the sport.

The bowhunting crowd is seasonal by nature, but recreational archers are most frequently active in the summers.

Archery has always been a passion for Mr. Cimarello from a very young age. Those years of experience are what he says has helped him build the business the most.

“It’s more about knowhow than anything else,” he said.

He has some specialty tools to work on and set-up bows, including a bowpress, which can range from $400 to $2,000. It’s all set up in his garage right now, and he opens the business only on evenings and weekends to work around his day-job.

The goal, he said, is ultimately to purchase a storefront and expand his services to more than just archery.

The couple wants to expand into gunsmithing and other outdoor-focused sporting goods, to become the local small business answer to big-box stores like Gander Outdoors.

“We have lost a lot of those kinds of businesses lately, and the national chains like Gander Outdoors aren’t sticking around either,” he said.

Mr. Cimarello says the north country has a unique love for the outdoors that should allow a business like that to flourish, but for some reason the archery-specific stores have begun to leave the area. Even as far north as St. Lawrence County, Mr. Cimarello said he’s seen many shops that served generations of archers close up.

Nowadays, however, Mr. Cimarello said it’s gotten easier than ever before to get the proper licenses to bowhunt, which has led to a kind of resurgence in the market.

Thanks to the coronavirus pandemic, the NYS Bowhunter Education course began offering an online version in 2020, something that appears to be sticking around.

Mr. Cimarello said he’s seen a huge number of new clients this year between the ages of 21 and 35, people who were able to complete the online course and get started with bowhunting.

“That brought a lot more people in, people who didn’t have time before to take the course or who weren’t willing to travel and sit in a room to take it,” he said.

That growth has helped push the business forward and Mr. Cimarello is hopeful they’ll be able to expand into new areas soon. For now, he’s happily serving as many clients as he can find.

“It’s been good, a relatively good season,” he said.