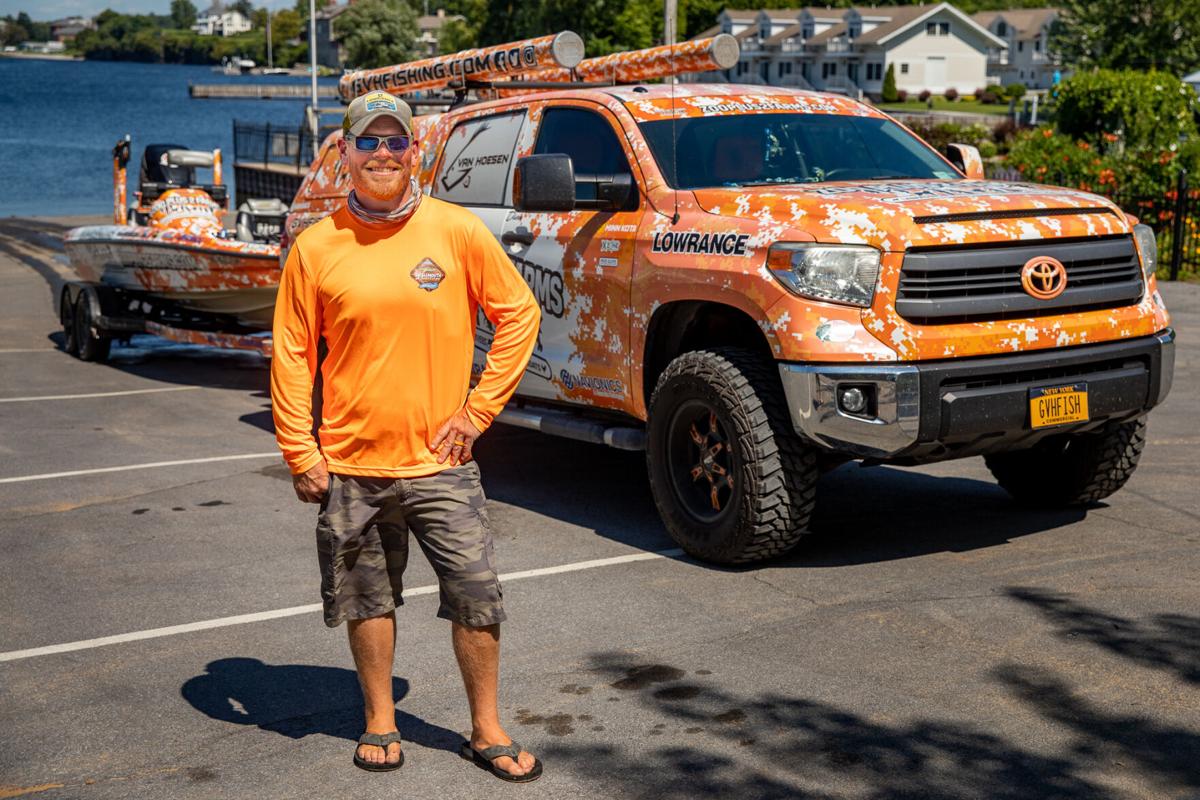 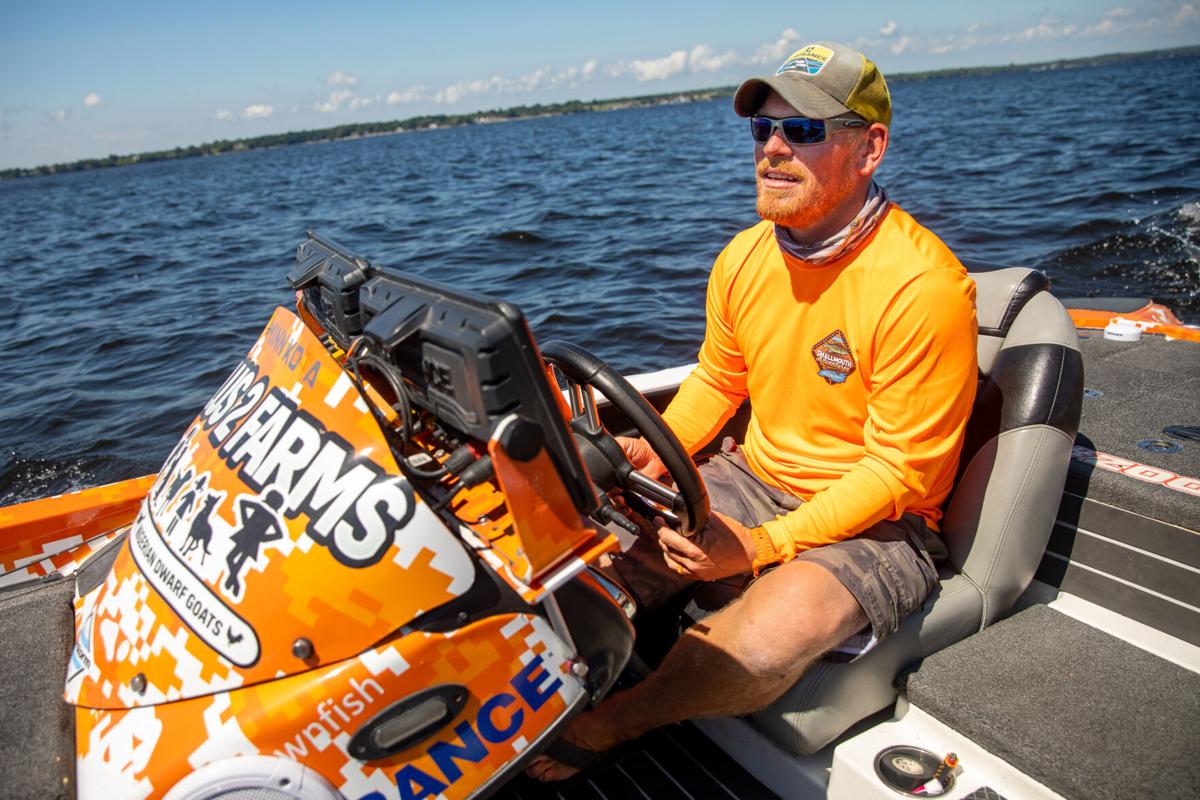 Captain Glenn Van Hoesen says that he does what he loves and that is to spend the days out on the water fishing. He has turned that passion into a successful career as a guide and tournament angler. NNY Business magazine sat down with Captain Van Hoesen to talk about his transition from military to guide, why he’s passionate about the sport and what it means to share it with his customers.

NNYB: How did you first get into professional bass fishing?

VAN HOESEN: I’ve always fished, pretty much my whole life. After I was in the military, I started tournament fishing, and then moved back here to New York and just kept at it with tournament fishing. I fished more and more on the St. Lawrence and the lake with sponsors, and then I got into the bigger stuff, like open tournaments in like 2007.

VAN HOESEN: It’s the competitive side of it. It’s a way to fish, which I love, and be competitive, which I also love. You can go out and see how many fish you catch or whatever per day, but to bring them back to the scales and see how you’re doing against other good fishermen, it’s kind of fun. I don’t watch sports, I don’t get excited about football games, I don’t get into any of that, so tournament fishing is my competitive outlet.

NNYB: What do you do with your days? Do you have a full-time job?

VAN HOESEN: I’m 100% disabled from the military, so I get VA disability, and that money allows me to pay off my bills. I got my captain’s license last year and now I run a charter, 1000 Islands Smallmouth Adventures. The money I make from tournaments and from guiding and stuff, that’s what I live on. I guess my full-time job is guiding.

NNYB: What is the process to get a captain’s license?

VAN HOESEN: Well, to get it, it takes four weeks of classes. I went down two days a week, and it was altogether an 80-hour course. You learn all the navigational beacons, lights, flags, that sort of thing. There are the ‘rules of the road’ section, too. It’s quite a lengthy process.

NNYB: What does it allow you to do?

VAN HOESEN: A captain’s license is what lets you work on the water professionally, so it’s how I’m allowed to have passengers and run my fishing guide business. You can’t run a boat for hire without one.

NNYB: What do you like about running fishing charters?

VAN HOESEN: I love it, the area is so rich and the fishing here is so incredible. People love seeing the tournaments, and being able to then take them out and put them on those same fish, people love it and I really enjoy seeing people get good catches. It brings the humility back to it. When you’re out there tournament fishing, it’s all about the five biggest fish you catch all day, so out here you’re always looking for five-pound fish. To have clients go out and get genuinely excited about three’s and four’s, it’s phenomenal. Sometimes they do incredible things too, I had a seventh-grader, that kid caught a 24-pound bag. I know tournament anglers who have never caught a 24-pound bag in 10 years. That kid will never forget that.

NNYB: How often are you out on the water in an average season?

VAN HOESEN: On average, I’m out here probably six to seven days a week if I can be. If I don’t have something going on with my daughters, my wife or the dogs, I fish as much as I can.

NNYB: What do you do with all that time?

VAN HOESEN: It’s sunup to sundown if I can. I’ll run my trips, and a lot of time after a trip I’ll go back out and try to locate fish for the next trip or just hang around. I still have to have fun with it, and while it’s fun with clients, it’s a different kind of fun when I’m on my own.

NNYB: How many charter trips do you do a year?

NNYB: Your truck and boat, with their matching bright orange camouflage wrapping, is somewhat special among professional anglers and is kind of notorious along the river and lakeshore launches. How did you come up with that design?

VAN HOESEN: The wrap was designed by Vital Signs in Rochester, other people have the orange camo but it’s different, this is the only boat or truck that has this specific design, and it’s not super common to go all out like I did. It was my way, with the digital camo, to tie it in with the military. And I love anything that’s loud, loud colors, neons. The orange worked with the camo, so that’s how it came to be. I’ve actually had a few trucks and I just always get the same truck with the same wrap, so it’s gone through a few iterations but nobody has really noticed.

NNYB: Bass fishing, especially for smallmouth bass, is very popular around the 1000 Islands. What makes them so special?

VAN HOESEN: You can weigh in a largemouth if you catch one, but smallmouth have the appeal due to their size. On average, you could fish and try to target largemouth for an entire season and you may catch one five-pound largemouth, but we can go right up the river here and fish for an hour and there’s a 90% chance you’re going to catch a five-pound smallmouth. Around here, in Lake Ontario and the St. Lawrence River, the water just sets up a little better for smallmouth, and now with the introduction of the goby fish and zebra mussels, the size has just gotten astronomical. It’s purely a numbers game.

NNYB: You’ve fished in tournaments all around the country. Where have you found the best fishing?

VAN HOESEN: It’s right here, that’s why I bought a house here. I lived in Texas, I fished all over the south, a bucket-list line of places you’d want to go as an angler, and this is the best bass fishing I’ve ever found. There’s a reason why this place has been voted for the past like three years as Bassmaster’s number one spot in the country.

NNYB: What’s your record for largest fish and heaviest bag?

NNYB: How has professional, tournament fishing changed over the years?

VAN HOESEN: I’d say the technology has come miles. You see on my boat I’ve got all these TVs on it; I’ve added a few recently and it can be expensive, like $4,000 for each screen, plus whatever it costs to add on the actual tech. I added an active sonar unit recently, so I have three screens up front and when it’s on I can actually see where the fish are right at that moment. It’s useful, but it’s super expensive.