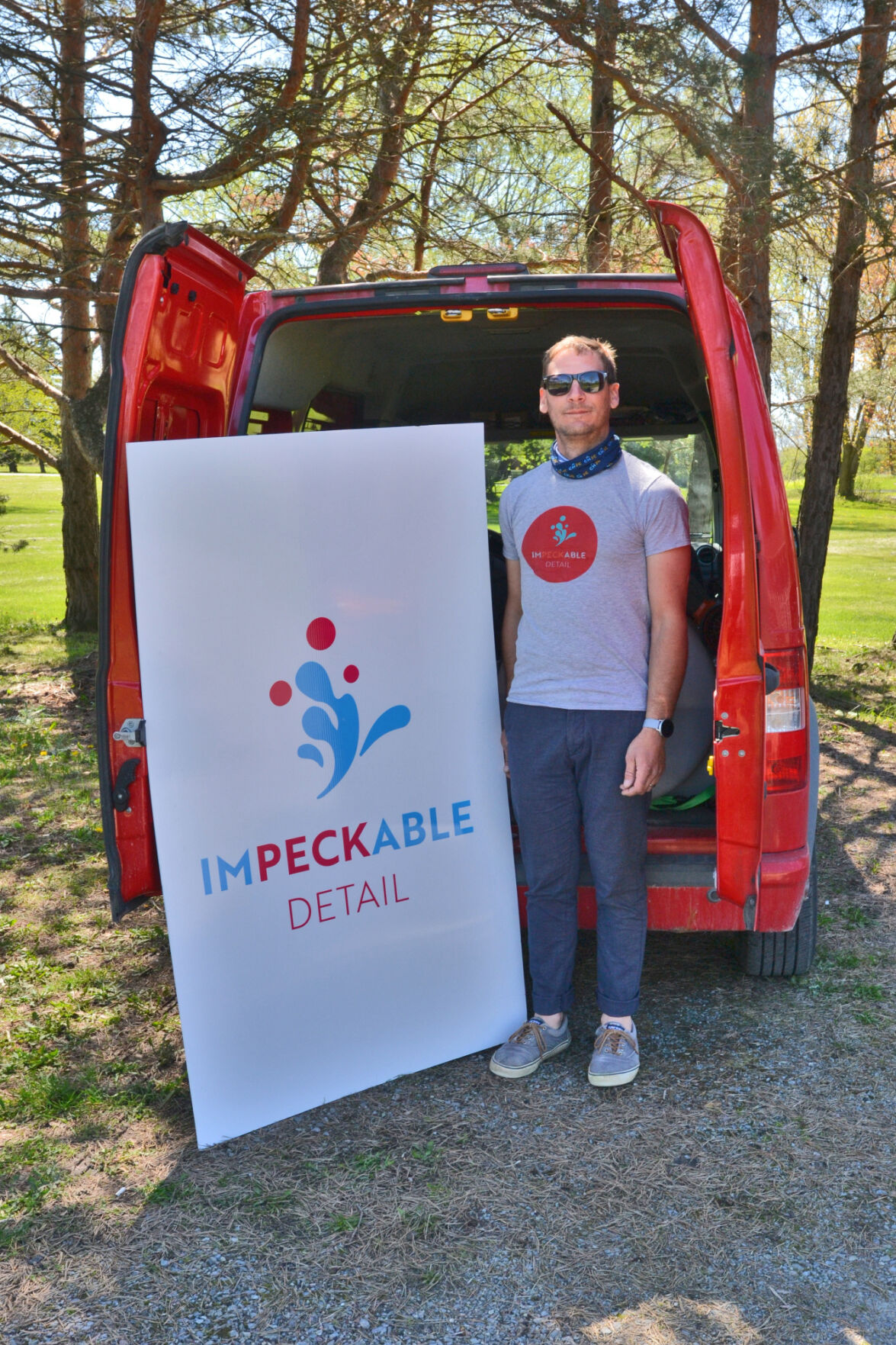 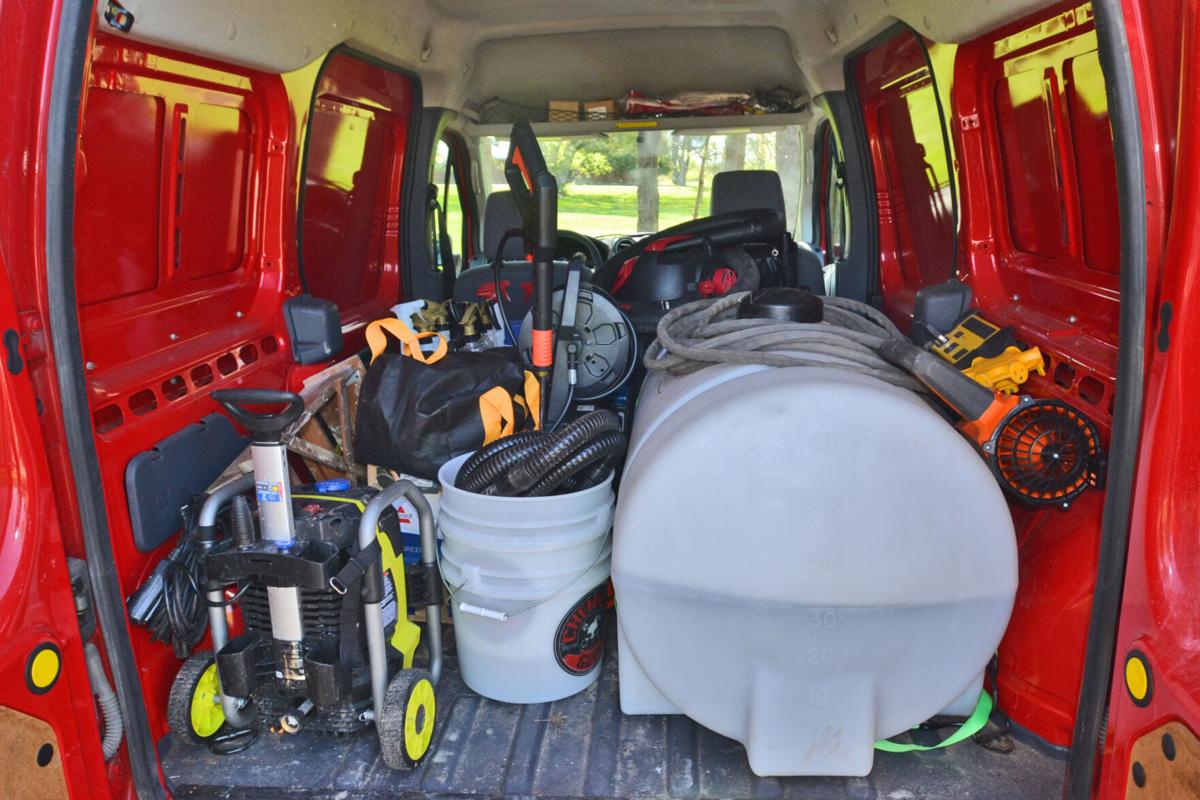 With a knack for detail and an innate drive to be productive, Clayton resident Derek Peck has created a small business that incorporates both to help others during their busy schedules.

Impeckable Detail, a mobile car and motorcycle detailing business, grew from a simple observation. Mr. Peck, while on his lunch break from his full-time job at the Children’s Home of Jefferson County, watched as a young mother got out of her car with her child.

“I watched as everything in her car spilled out all over the place. I was like, ‘What if somebody like that could go somewhere and come back out and their car would be clean?’ So, that was how it all started,” said Mr. Peck. “It just was an idea, then you do a little research and find out other people have done it, what their setups are, and my business was born.”

It was at that moment that Mr. Peck knew he had a new venture opportunity, but what about a business name? Getting creative Mr. Peck, while at home with friends, was struck with inspiration from his own name – ImPECKable Detail.

“I was having a couple beverages on my deck one night and it just came to me. I was just like, ‘Wait a minute, this would be great!’ That’s just kind of how it started and I had a friend’s daughter, Lexie Cassidy, do a bunch of my artwork for me. She was great; she was great to deal with and had all sorts of ideas. Another young mind that just was exploding with ideas,” said Mr. Peck.

Mr. Peck has always had side jobs apart from his full-time roles, but he says that it has been a positive journey and experience to start his own. Utilizing the New York Gov online portal Mr. Peck was able to take the leap and he says that he has been busy since his start, and basically only by word of mouth.

“It’s all been through word of mouth and consistency in what I do. I have not used social media or anything like it. I do not even have a website,” explained Mr. Peck. “I would rather be doing research on new cleaning techniques or out working... I don’t want to waste my time with it. I am filling my weeks up now and I’m only one person.”

What separates Impeckable Detail from other detailing businesses is that he doesn’t only clean and detail cars but he extended services into motorcycles as well. Mr. Peck says that he will come to you and your vehicle, no matter what type, and begin making sure that not only the inside is impeccably clean, but also the outside as well.

“If somebody wants a full car detail, it would be a full interior/exterior. Outside would be tires, rims, clean fenders, wheel wells undercarriage, you get a full handwash wax, a clay bar treatment, which is when I rub a clay bar and a lubricant all over the paint. It takes off any of the particulates that get on your vehicle from the road, like a lot of your brake dust will start to rust things. And then when you wax over that, that gives you like a true showroom gloss,” said Mr. Peck. “I do all the rubber treatments on all the plastics, anything that’s black on there, it gets black coated.”

Mr. Peck even goes as far as cleaning inside the fuel cap.

“I got a call from a customer just last week and they went to get gas and opened their fuel cap and couldn’t believe that I had even cleaned in there. It’s about the details,” said Mr. Peck.

He continued that for motorcycles the biggest aspect for cleaning them is the chrome work, which Mr. Peck has life-long experience with as a drummer.

“With playing drums my whole life, I have learned many tricks to cleaning chrome. I have turned completely pitted out rusted, like Chevy bumpers that have complete chrome on the back, and just shocked people that you can get them almost back to brand new if it hasn’t rusted through,” said Mr. Peck.

When asked where he sees the business going in the next five years, Mr. Pecks answer is simple... He enjoys his full-time job and loves having this as his new venture. Starting the business during the pandemic, he says that he wants to wait and see just how busier he will become as the north country begins to open up and people begin to be out and about more.