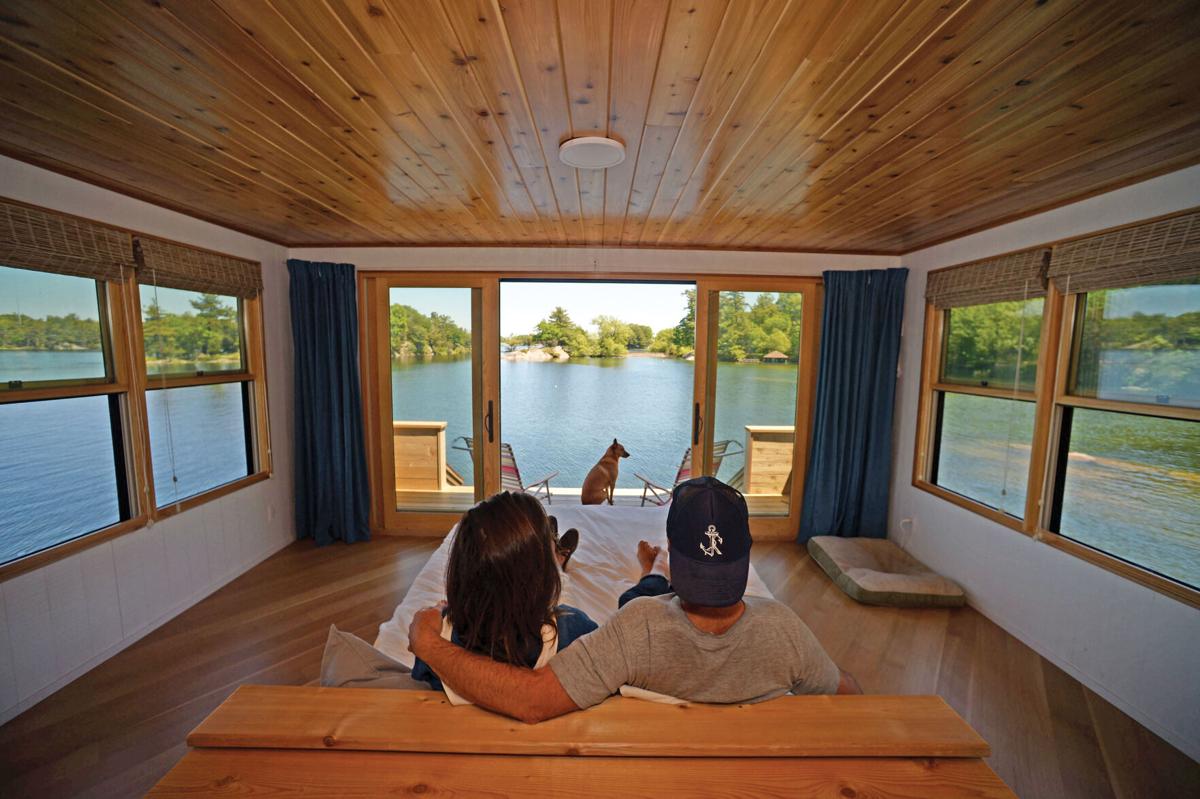 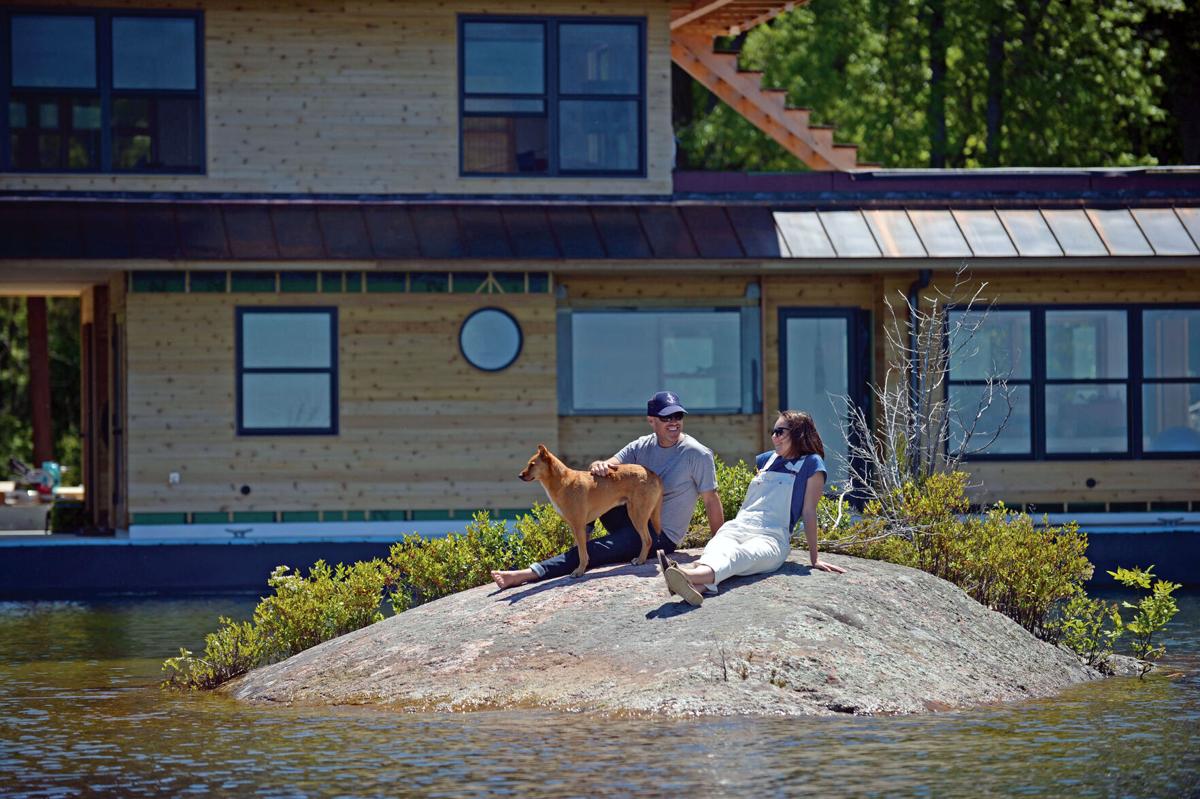 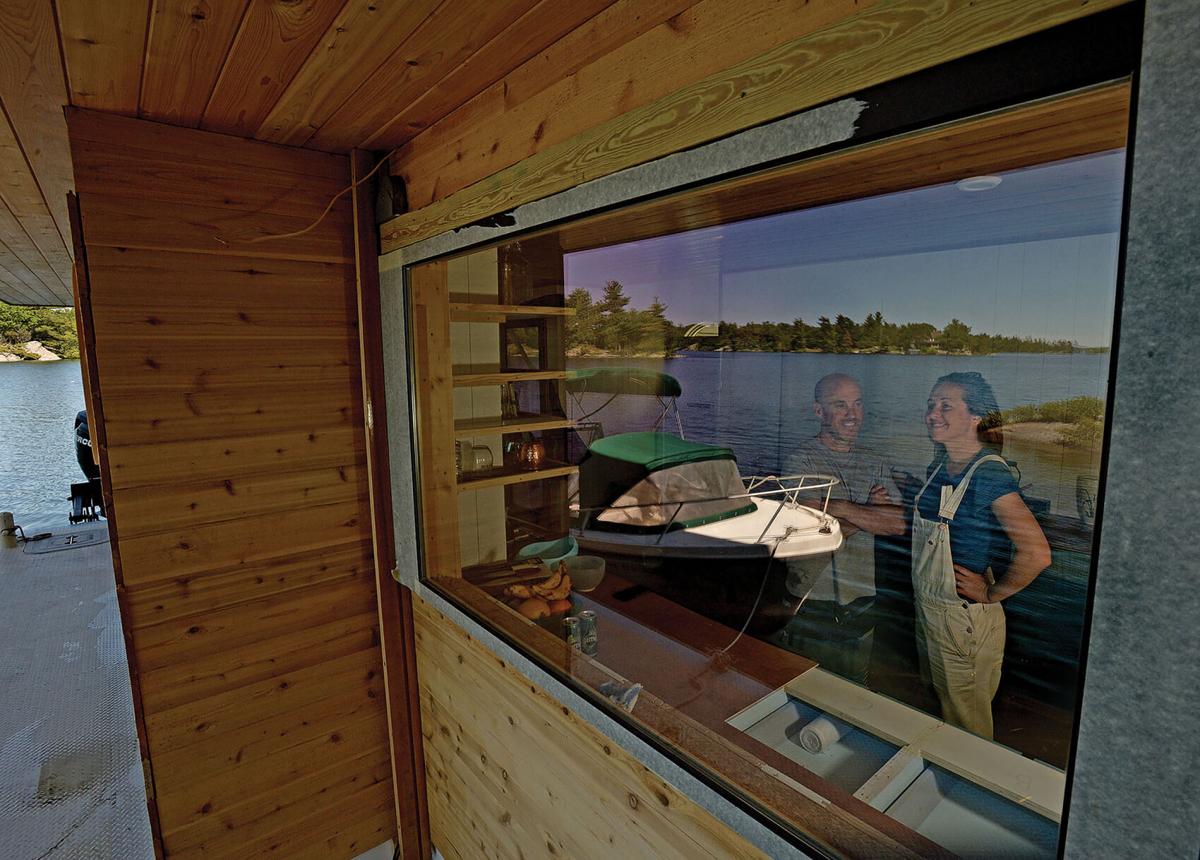 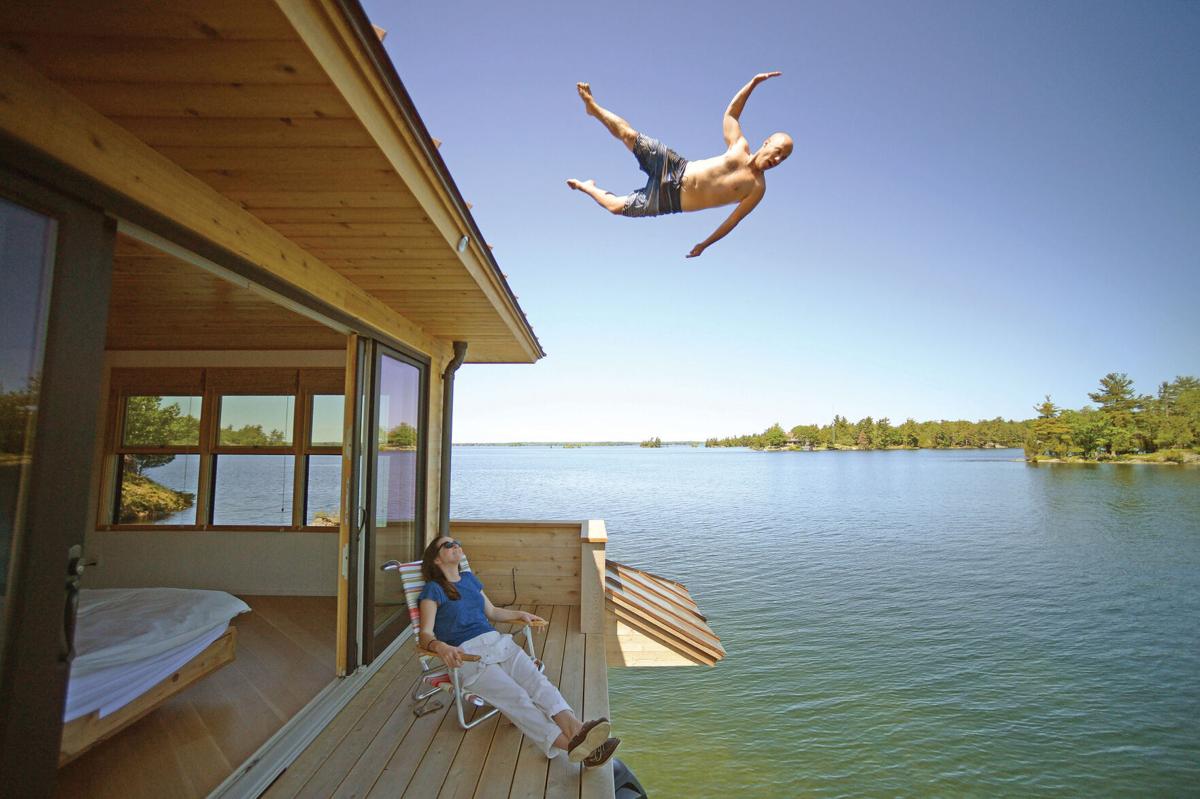 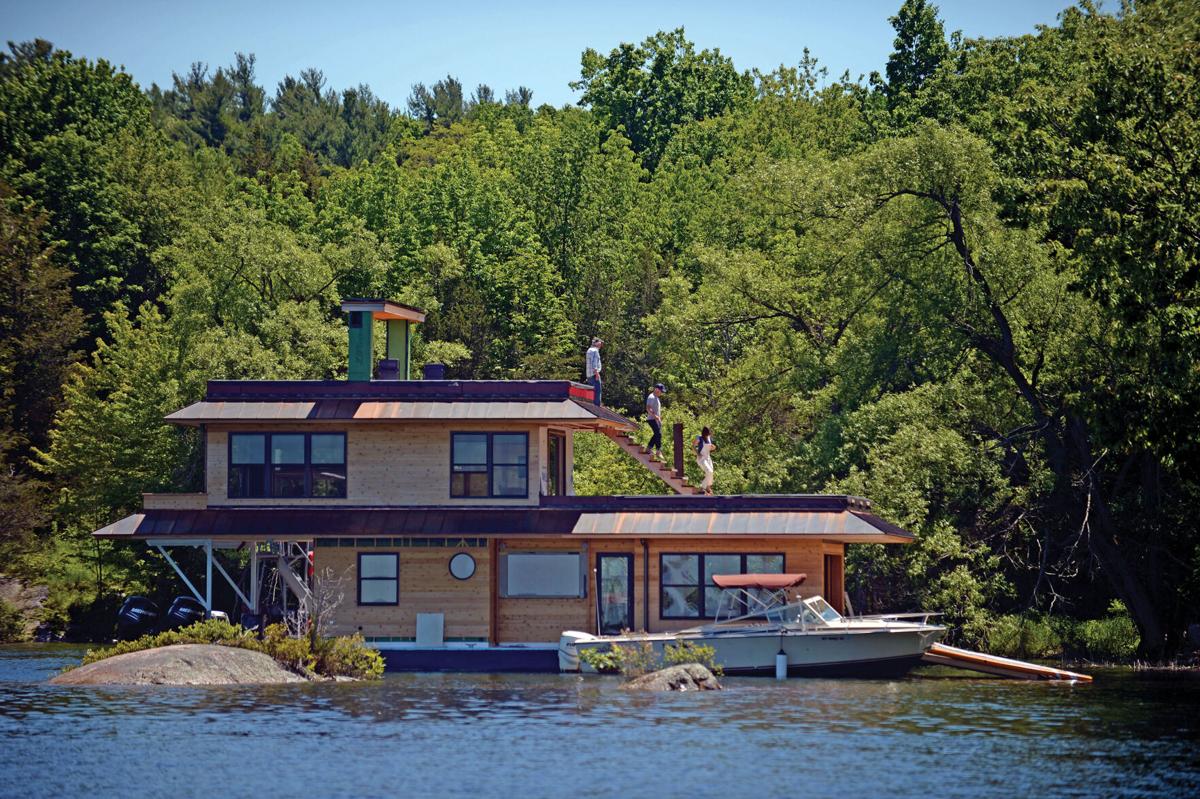 Julia Purcell and her husband Rich Rossmassler are trailblazers—both literally and figuratively.

The pair split their time between New York City and Grindstone Island, and have already left indelible marks on both. When Julia founded Taste 1000 Islands, she created an actual network and trail connecting local wineries, craft breweries and distilleries in the region. This, in addition to Le Juit Productions, the full-service creative content house she co-founded. Meanwhile, Rich has carved out a trail of buildings in New York City that he has built up, developed and managed, etching out a name for himself in one of the world’s most competitive real estate markets.

In short, what Julia and Rich imagine, they will into being.

So it comes as no surprise that when the couple, which has family on both sides of Grindstone Island, wanted to create a space of their own on the St. Lawrence River, they blazed a new kind of trail requiring no roads, paths or trail of breadcrumbs: a home independent of any plot of land, done in a style never seen before.

Julia and Rich built a contemporary and sleek, three-story dreamhouse that would fit in on the trendiest Brooklyn block (or Califonia coastal town, for that matter). But this home isn’t situated on pavement. It’s on a barge. In the middle of the St. Lawrence River.

A match made on Grindstone

Julia and Rich met around a decade ago through mutual friends on Grindstone Island. They had both grown up spending time on the island, and when they connected they were both traveling frequently between Brooklyn and Clayton. “We both lived in New York City and here,” Julia said. “When we became friends on the island, we started carpooling together back and forth.”

The friendship turned to romance, and the power couple’s courtship eventually blossomed into a marriage. As the years went by, Julia’s and Rich’s respective families grew and filled up the houses on both sides of the island this couple loved so well. “We talked about whether we should buy more property of our own,” Julia said. And then they realized that if the property was floating, they could bring it to both sides of Grindstone. “Plus,” Julia added, “we could take off when we wanted to.”

The idea for the St. Lawrence Barge Yacht had been born.

“From the beginning, this was an idea Rich had,” Julia said. “It was three years ago when he said, ‘Wouldn’t it be amazing to build a floating house?’ Then we talked about it for a year. We talked to my dad and Uncle Mark about it, and they thought we were crazy.”

Julia’s father, Tim Purcell, and uncle Mark, are both experienced builders. Tim has his own business, Tim Purcell Construction, while Mark owns Purcell Construction in Watertown. Actually, the Purcell family is filled with building experts—and they love a good, collaborative project. They just didn’t realize they were on the verge of one so special.

One of the biggest concerns with building a house on top of a barge was the cost. Shopping around, Julia and Rich had trouble finding something affordable in the size they wanted. Rich studied everything he could find about barge manufacturing and houseboat construction. Then Julia’s father, Tim, stepped in.

“In January of 2016, my dad sent a picture of two pieces of steel and said, ‘I’ll build it.’” Julia and Rich gladly accepted the offer; and Rich set about designing the dream home: with a minimalist’s eye for crisp angles and wide-open windows, with every surface and angle serving a distinct purpose. He and Tim worked together on the ideas, bouncing concepts around for layout, lighting, water, and outside spaces.

Tim’s brother Mark jumped in to offer up use of his manufacturing shop in Watertown, and his welders who put those two pieces of steel together into a barge capable of supporting a two-story home with third-level roof deck.

“The barge was built in two pieces last winter,” Julia said. “Then we got it onto a trailer and drove it to Clayton. Jeremy Kellogg [of French Bay Marina] let us use his parking lot all winter. Then last spring, the pieces were welded together. Finally, everything was pieced together in French Bay and dropped into the water with two cranes from Billy Bach.”

In early June of last year, the floating frame and barge were floated to Alexandria Bay, where Tim took over along with a team of workers from Andy Greene’s crew (Greene Structures), working on the house’s frame and interior. It’s been floating ever since.

For the barge yacht’s final touches, Julia and Rich opted for solar power, a compost toilet, greywater filtration, and a water-drawing system that was recently finished.

“We went with a one-kilowatt array from Proven Energy Systems out of Hammond,” Rich says. “Our goal was to be as off-grid as possible,” Julia adds. “When we’re not using engines, which is 95 percent of the time,” we’re running everything off of three solar panels.”

Building a barge yacht isn’t entirely different than building or renovating a home in Brooklyn—something Julia and Rich are well-versed in. But once you get past the striking similarities in cost and size, the comparisons end.

Few (if any) Brooklyn dwellings have garage doors that open up to a power lift that raises and lowers a ramp (doubling as a front deck!) to shore or river. Nor, for that matter, do city apartments boast twin 175-horsepower Mercury engines that can transport said homestead from point A to point B—or out into an open river channel for lazy afternoons spent splashing around or sunning on the roof deck.

Against a backdrop of downtown Gananoque (the Canadian town is just a five-minute powerboat ride from the back end of Grindstone where Julia and Rich are currently docked), the St. Lawrence Barge Yacht rises up out of the St. Lawrence as its own personal island. Every side of the home is covered in windows and glass doors, so no matter where you are in the house, you’re looking at the water. The third-story sun deck has a solar canopy that doubles as a small shade offering and has a perfect platform for the solar array.

The bedroom, located on the second floor, has the bed situated so the huge glass doors are at your feet—and when you sit up in bed, you have a totally unobstructed view of the open water.

On a kitchen shelf is a stack of books: Letters of a Woman Homesteader by Elinore Pruitt Steward, Knots: The Complete Visual Guide by Des Pawson, and one book belying the metropolitan couple nesting into this unusual dwelling: Where Are the Customers’ Yachts? A Good Hard Look at Wall Street by Fred Schwed. Wifi allows Julia and Rich to stay plugged in to their city lives—no matter if they’re parked on the back end of Grindstone, anchored somewhere off the coast of Canada, or floating aimlessly along the St. Lawrence.

The minimalist space features Asian undertones like the stacked and flared metal roofs, and minimalist, contemporary lines and colors throughout. The gradient-blue kitchen cabinets were Julia’s doing—Rich is color blind, and prefers tans and whites to vibrant hues.

Every detail is perfect: from the featured circular window in the kitchen, to the gorgeous Smeg fridge and woodwork throughout. The home, while modest in its size and simplicity, is inarguably jaw-droppingly gorgeous.

The future is barge

Julia and Rich hope the St. Lawrence Barge Yacht will inspire others to ditch the idea of owning land and opt for creating a dwelling that can see different scenery on different days of the week—or at different hours of the same day.

Certainly, spending time on the first-even St. Lawrence Barge Yacht and being treated to every creature comfort of a custom, brand-new home while floating adrift along the St. Lawrence River is enough to convince just about anyone that there are few other ways to live that could possibly be so rich.

Should everyone who is able to get the COVID vaccine receive it?