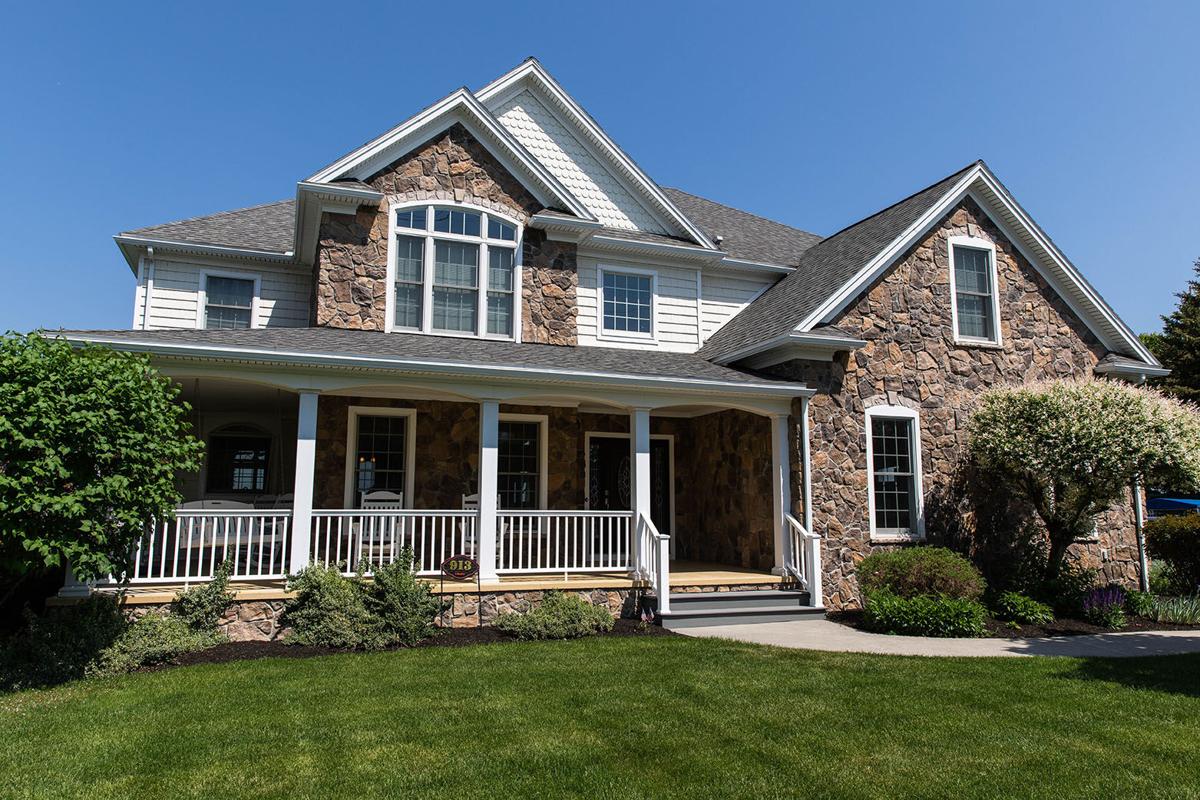 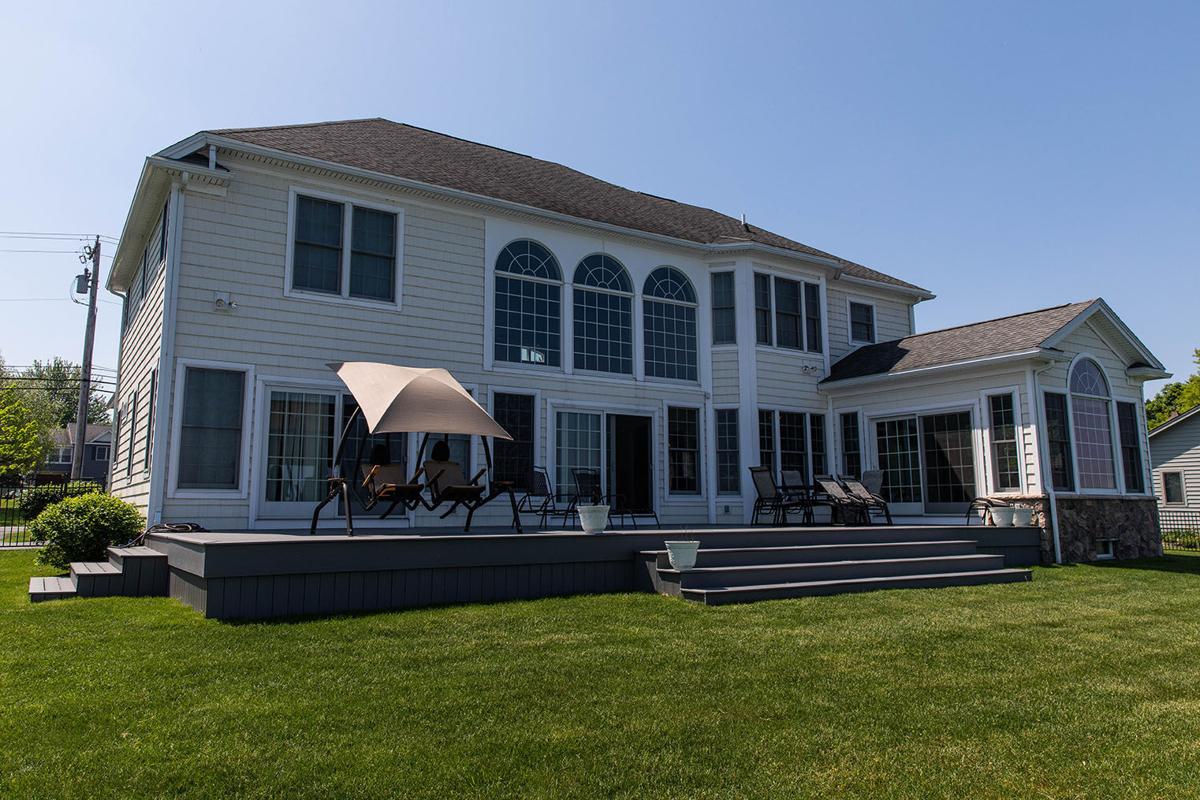 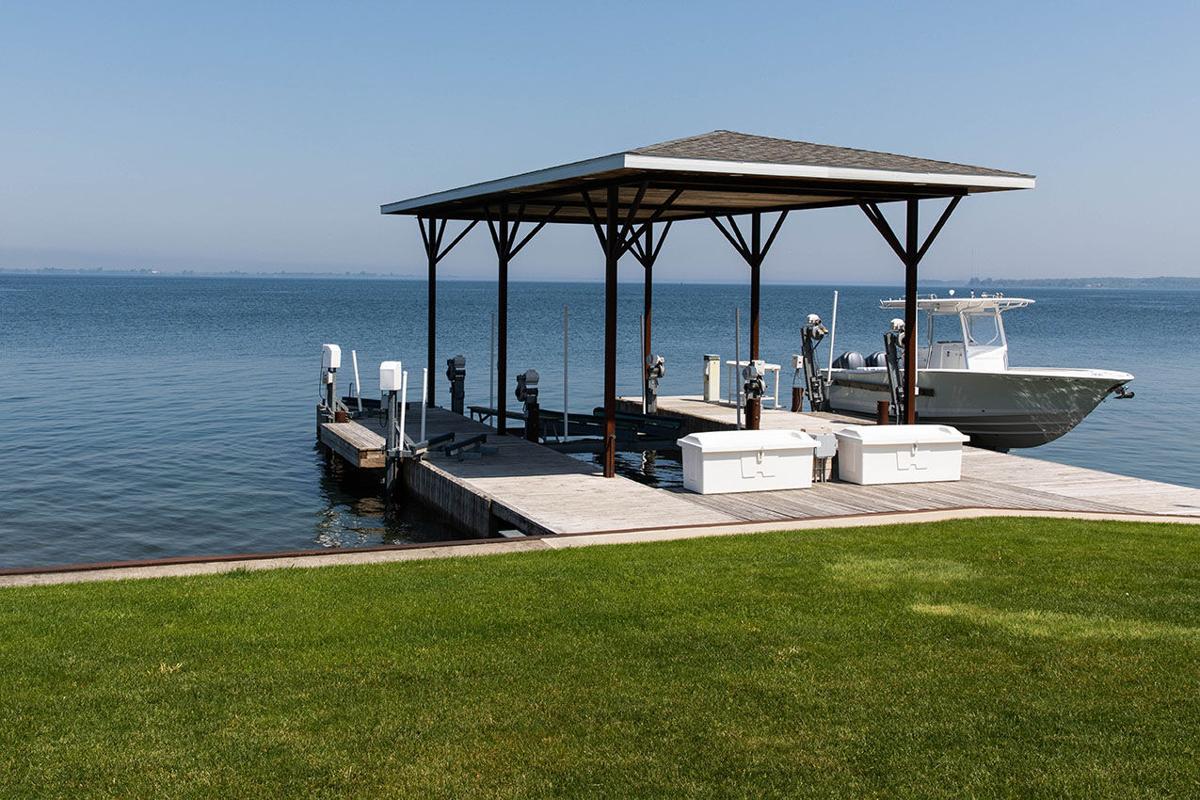 The homeowner’s boat is docked at his personal dock at 913 E. Broadway St., Cape Vincent. The boat isn’t for sale, but the owner would sell with the house if an offer was made. SYDNEY SCHAEFER/NNY MAGAZINES

“I choose to listen to the river for a while, thinking river thoughts, before joining the night and the stars.” – Edward Abbey

Whether one grows up on the water, learning to appreciate natural beauty from a young age, or finds themselves along the water later in life, one thing remains the same- the sense of awe will never falter.

It was that sense of awe that drove John and Lynn Richardson to build their dream summer home in 2008, along the shore of the majestic St. Lawrence River.

A river home perfect for both entertaining and quiet reflection on the water, the property, located at 913 East Broadway in Cape Vincent, provides plenty of room for everyone in the family on a 0.69-acre lot, hiding a beautifully done interior behind the vinyl and stone exterior.

“We were looking for land up here and we finally found it, back about 13 years ago,” Mr. Richardson said. “And then we had an architect design the house to accommodate not only my wife and I, but our three kids, their spouses, grandkids, and guests. I mean, it’s kind of a party house for us; we’re an entertainment house, I guess.”

With five bedrooms and four bathrooms, the river retreat lacks nothing when it comes to comfort- boasting central AC with small, unnoticeable units, in-floor radiant heat and a 40KW generator, allowing for temperature control in any season. The two-car garage is heated as well.

On the first floor, after stepping into the home and noticing the intricately tiled entryway behind the ornate front door, one can’t help but marvel at the space and natural light filling the home. On the same floor, the master bedroom is complete with a handicap accessible shower in the attached bathroom.

Upstairs, the first two bedrooms share a Jack and Jill bathroom, while the main master boasts a beautiful reddish brown-tiled bathroom made for relaxation with a tub and separate shower encased in glass. The main master also has a wonderful walk-in closet to fit multiple seasonal wardrobes.

An ultimate entertainment home, the kitchen is complete with an ice maker, wine fridge, trash compactor, double ovens and more. A chef’s dream, there’s also plenty of counterspace and other top-of-the-line appliances. This all opens into a casual den area complete with a propane fireplace, the nearby dining spaces- both casual and formal, and a sunroom encased by windows to lounge and watch the freighters pass by along the river.

“The kitchen has all the kind of stuff you’d want for, you know, summertime making great drinks and sitting out in the water,” Mr. Richardson said. “Then we had a dock built, it was kind of custom, that has two boat lifts, plus two jet ski lifts, because if you’re going to be on the water without having toys, you might as well not be here.”

With so much to be impressed by, it is still hard to miss the large formal living room with vaulted cathedral ceilings and bridge landing upstairs connecting the bedrooms and looking out at the St.

Lawrence from the all glass front. A word of caution: Be careful not to get too swept up in the breathtaking view while walking downstairs.

Looking out across the shipping channel, one can view Wolfe Island, Ontario, Canada, on a clear day. There’s also a large covered front porch, so there are many options for sitting outside and enjoying the day with a hot, or cold, beverage depending on the weather.

In the morning, one can enjoy the day’s first cup of coffee at the breakfast bar and spend the day inside or in the water, or venture out into beautiful Cape Vincent for some shopping, food and fun. In the evenings, it’s hard to find a spot in the house that isn’t perfect for viewing the spectacular and colorful sunsets the north country is known for, paired with a drink from the wet bar.

The house, listed by Weichert Realtors, Thousand Islands Realty LLC, is currently priced at $1,400,000. According to Mr. Richardson, everything used in the construction of the home was sourced from Steven J. Hall Inc., a custom builder in the area.

This beautiful property isn’t the only one the Richardsons own, with their main house they built in Pennsylvania 35 years ago, a property in Florida near West Palm Beach, and a 45 foot diesel pusher motor home that they travel in.

According to Mr. Richardson, from Pennsylvania it’s about a six hour drive to get to their Cape Vincent home. In the warmer months, they come and go all summer long, staying for a week or two at a time.

Though he loves the house and wishes he could keep it, especially for the location and views of the calm waters, with so many houses, the Cape Vincent home isn’t getting as much use, which ends up costing the Richardsons because they take care of the house year round and heat it through winter while in Florida.

He said last year they spent a total of five weeks in Cape Vincent over the summer.

“My preference is I’d like to be here, my wife’s preference is she wants to be in the home we built in Pennsylvania 35 years ago,” Mr. Richardson said. “And at the end of the day, I lost the battle.”

According to Mr. Richardson, the area has very little boating activity compared to Clayton or Alexandria Bay where boating traffic is really heavy, so when his kids or grandkids are there, they’re out on jet skis or tubing, doing whatever, and oftentimes they’re the only boat out there.

His favorite memories of the home are centered around time spent with his family on the water, sitting out at night, roasting marshmallows, and making s’mores with the kids, as well as going tubing, skiing, or fishing early in the morning.

“It’s just a great place to build memories with children,” he said.

Before retiring, Mr. Richardson owned a few different software companies that did business around the world, so he was usually on a different continent almost every week. Traveling for work most of his life, his wife raised their kids. After he retired and the family started spending time in Cape Vincent, he said he got to make a lot of that missed time up with the kids as well as his grandkids.

For those with kids, dogs or both, the property is fenced off due to the fact that the Richardsons have two Labrador retrievers they wanted to prevent from running into the road. According to Mr. Richardson, the neighbors are great, and the family has had the same neighbors since they moved in.

“I would really hope the new homeowners get as much pleasure and joy out of the home as we have,” Mr. Richardson said. “It’s hard to say who will buy it, but the people in Cape Vincent are really just great people and very welcoming, so my hopes are that they enjoy it every bit as much as we did.”