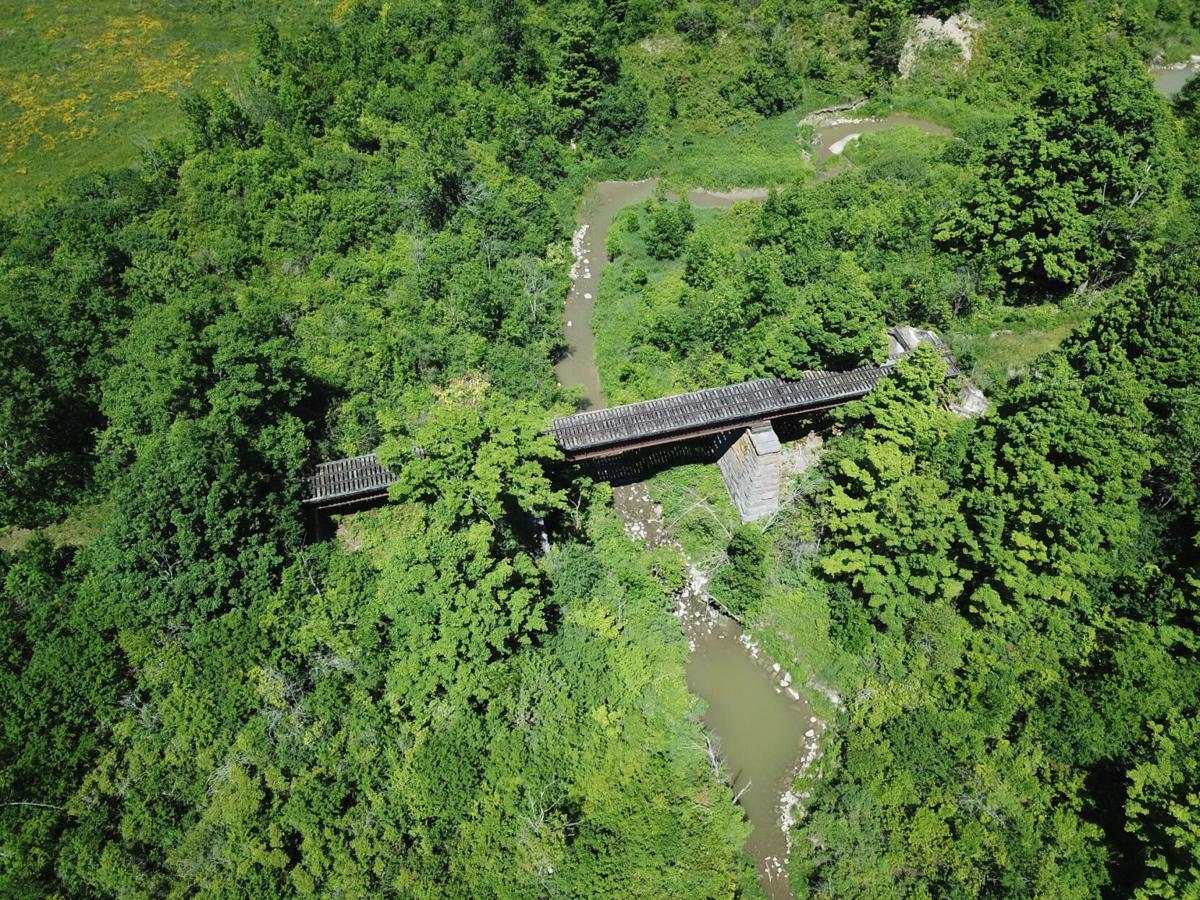 An aerial view of the McCarn Creek trestle bridge along Rivergate Trail in Clayton. The Thousand Islands Land Trust has secured $50,000 in state funding to restore the bridge, covering about one-third of the total restoration cost. Provided photo 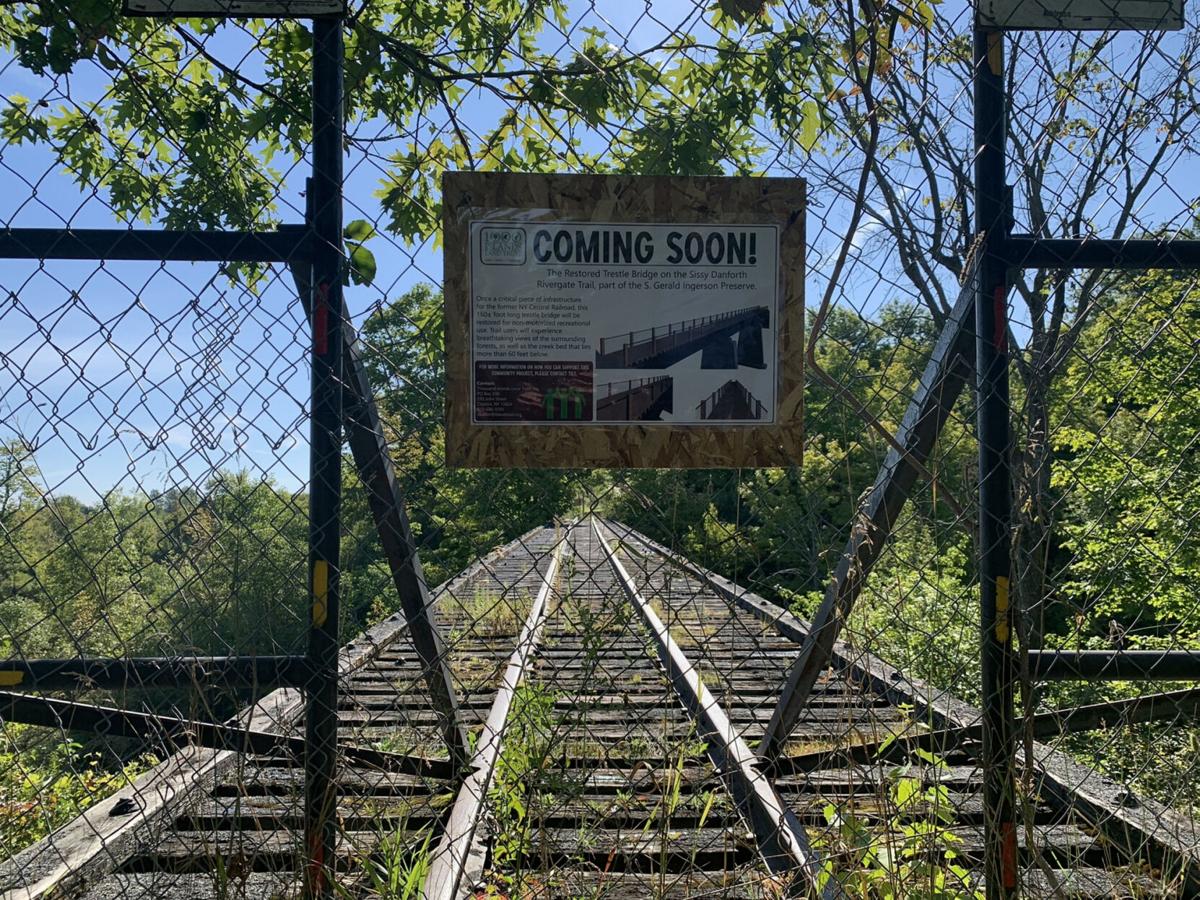 An aerial view of the McCarn Creek trestle bridge along Rivergate Trail in Clayton. The Thousand Islands Land Trust has secured $50,000 in state funding to restore the bridge, covering about one-third of the total restoration cost. Provided photo

The timbers of the abandoned railroad trestle over McCarn Creek are decaying and the concrete moss-covered. The span is fenced off for a reason, as rusty fasteners and the general decay indicate crossing it is not the best idea.

But many people who use the Sissy Danforth Rivergate Trail, where the trestle is found, gingerly walk down the banks of the creek and climb the other side, either as they head toward LaFargeville, or in the opposite direction, toward Clayton — in both instances usually with wet feet.

The Thousand Islands Land Trust is tantalizingly close to its fundraising goal of McCarn Creek trestle renovations, which is phase one of a larger project that when complete, will only add to the sought-after natural showcases of the Thousand Islands area.

In overseeing the project, TILT is connecting the past to the future.

“From our perspective, the railroad was what made the Thousand Islands what it was today,” said Terra Bach, director of development and communications for TILT. “The trains brought people in, they saw this beautiful place and set their roots down long ago. Restoring this piece of history means a lot to us. It’s a community asset and a treasure. We want the community to feel like it’s their own.”

In 1993, TILT began acquiring pieces of the old New York Central/Penn Central Railroad bed in Clayton, Orleans, Theresa, Redwood and Philadelphia. The rails-to-trails project, now 25 miles long, is named for former director, Louise “Sissy” Danforth, who was the inspired energy behind its development. It’s a multi-use trail in several sections that can be accessed from several points.

TILT’s main focus now is improving the trail between Clayton and LaFargeville, part of which contains TILT’s Gerald Ingerson Preserve. The crown of that improvement will be the rehabilitated McCarn Creek trestle. It’s about 5 miles from the access point in LaFargeville, located off Theresa Street. It’s about two miles from the trestle to the village of Clayton.

The project’s goal is $610,000. Due to a matching gift from the Northern New York Community Foundation, it will take approximately $39,000 to reach the goal. A $50,000 matching gift from Dan and Lauren Throop has helped to power the fund drive.

A span fundraising reaches the final stretch, an outreach effort is planned.

“We want to make sure that people know that whether it’s five dollars, 50 dollars or five thousand dollars, no matter the amount, folks and families can play a role in investing in this project and helping to make it possible,” TILT executive director Jake Tibbles said.

“We’re going to be reaching out this month with a mailing to local communities, because this project is going to connect communities,” Ms. Bach said.

With no bumps along the way, the trestle could be completed by the end of this year.

TILT’s request seeking building proposals went out to contractors in early June. The nonprofit partnered with Aubertine & Currier Architects, Watertown, to complete engineered plans and design for the restoration of the trestle bridge. Earlier, Aubertine & Currier completed a full-on structural assessment of the trestle, which “passed with flying colors,” Mr. Tibbles said.

“Hopefully, in the next couple of weeks, we’ll be in receipt of some competitive bids for the project,” he said.

Things like shortages and prices increases of construction supplies and labor supply could affect the schedule TILT has plotted for the span’s renovation.

Originally, TILT had planned for the trestle to be completed by early fall. The pandemic helped to push those plans back.

“Right now, we’re thinking it’s about a three-month project,” Mr. Tibbles said. “Hopefully, if we’re able to make a final bid selection by the end of June/July, we would be able to fit that three-month construction into the 2021 season. But recognizing that contractors already have very busy schedules, we didn’t put out a specific time frame out there. While we desire to get the project completed by the end of the year, we fully recognize that we’re going to eliminate a lot of potential contractors if we make that a requirement.”

Last fall, TILT was awarded a $50,000 grant from the New York State Conservation Partnership Program to support the span’s renovations. A portion of the fundraising goal is designated for long-term maintenance of the Rivergate Trail. The span project is phase one of TILT Rivergate Trail plan.

Phase two will connect Clayton’s riverfront to East Line Road (County Route 3), where a Rivergate trail head is located. A 1-mile section of trail was completed between Clayton’s municipal limits and TILT’s 140-acre Ingerson Preserve in 2019.

TILT is now working with landowners for easements to allow the trail to reach Clayton’s riverfront.

“Hopefully, by the end of this year, we’ll have those in place so that we can potentially begin work next year on phase two,” Mr. Tibbles said.

“This is a community-centric project and the trestle bridge and railroad route is part of our heritage here in the Thousand Islands,” Ms. Bach said. “We all share in pride of the place we call home. Northern New York is a special place and in honor of its rich history, we are excited to deliver another recreational asset to the community and with the community.”

Community officials are re-discovering the benefits that trails such as Rivergate offer their residents, Mr. Tibbles said.

“One of the silver linings of COVID is that people are more and more aware of the Thousand Islands Land Trust’s trails that they all have access to,” Mr. Tibbles said. “We saw an influx. The trestle bridge made our communities what they are today and now once this is done, you’ll be able to walk, bike, hike from downtown Clayton’s Riverwalk all the way to LaFargeville. It’s part of our mission. We want people to get outside. It helps improve your quality of life for that health aspect we all need, especially now after what we all went through.”