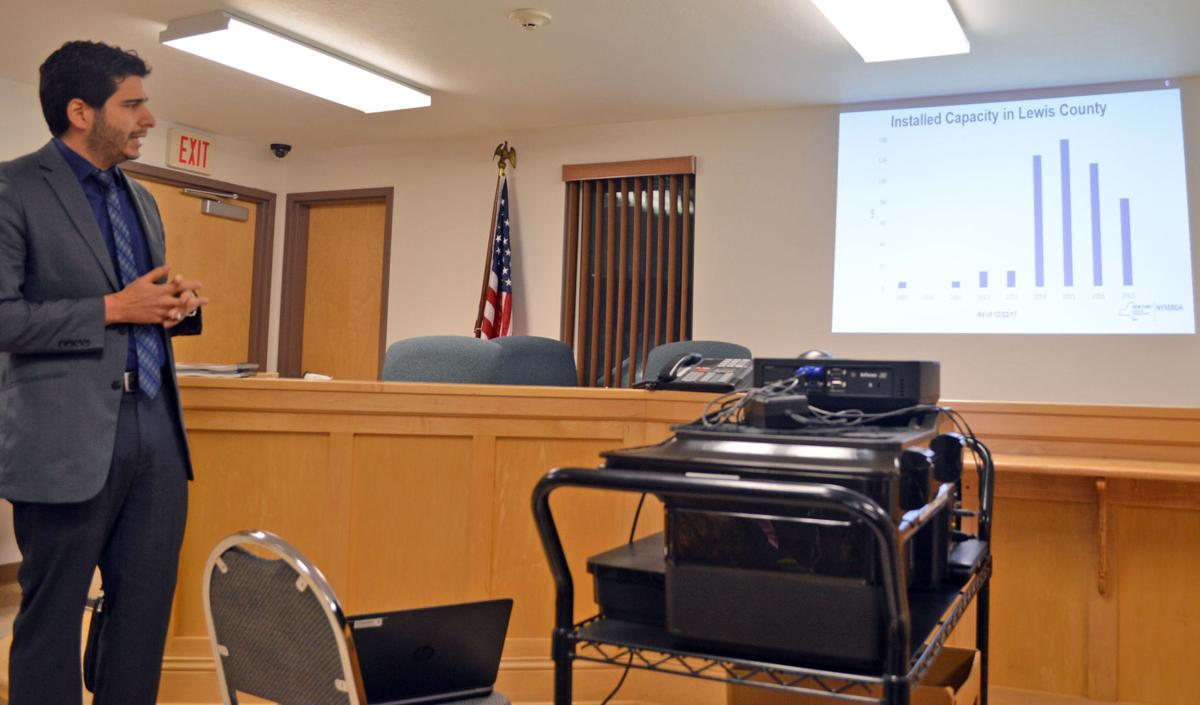 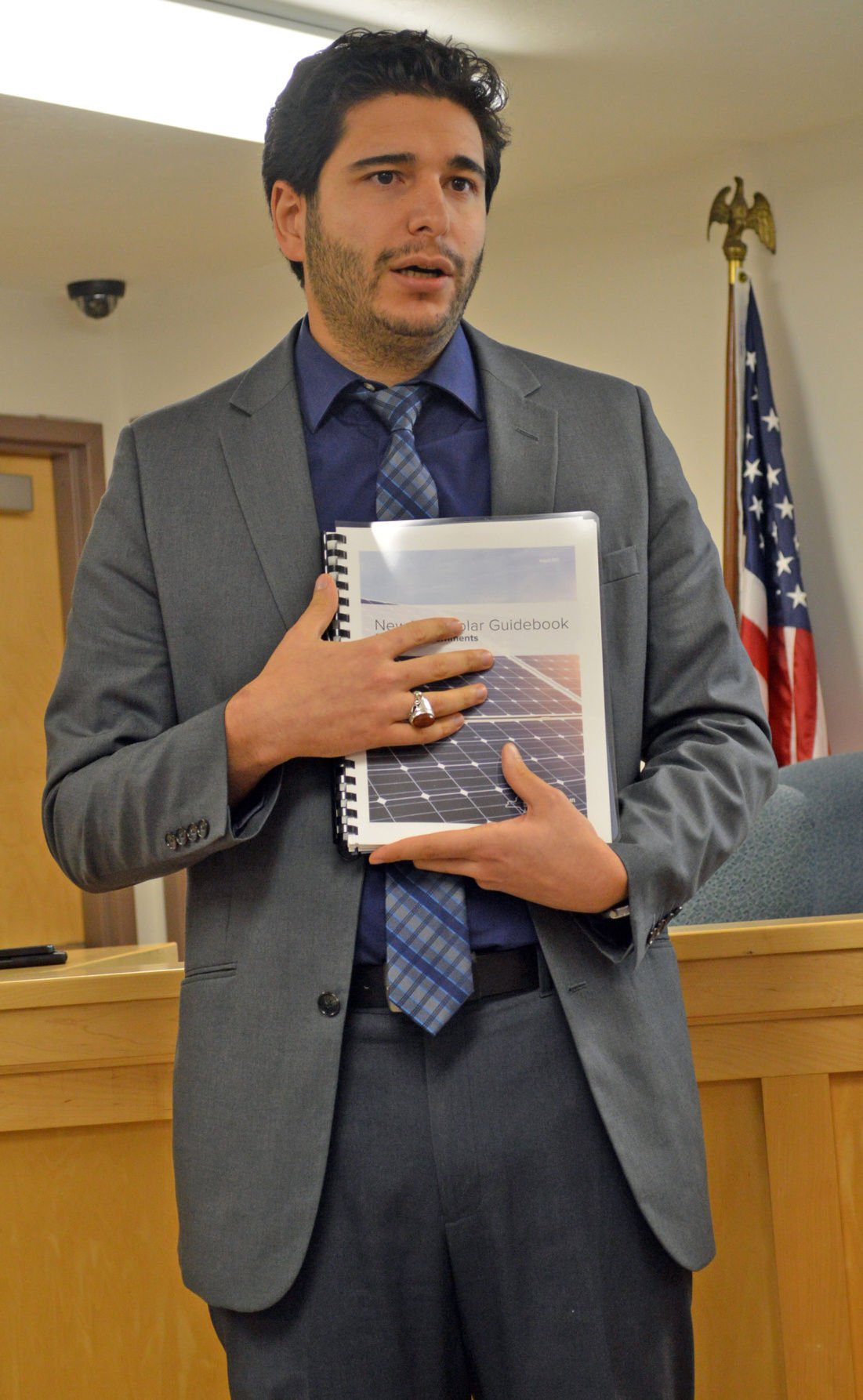 Houtan Moaveni, deputy director of the NY-Sun program, holds a copy of the New York Solar Guidebook for Local Governments Thursday during an informational session at the Denmark municipal building.

Houtan Moaveni, deputy director of the NY-Sun program, holds a copy of the New York Solar Guidebook for Local Governments Thursday during an informational session at the Denmark municipal building.

DEER RIVER — You can’t have electricity savings from community solar projects and heavily tax them, too.

“These projects are not financially viable at full taxation,” said Houtan Moaveni, deputy director of the NY-Sun program and state interconnection ombudsman.

Mr. Moaveni recommended that municipalities offer reasonable payment-in-lieu-of-taxes agreements to developers to avoid pricing them out of their respective communities. “If the PILOT is too high, you’re just going to scare them away,” he said.

The primary benefit of so-called community solar projects, typically involving 2-megawatt arrays, is that local residents and businesses can sign on to secure a reduction in their electricity costs, Mr. Moaveni said. That allows anyone to benefit from solar, including renters or homeowners who can’t afford the upfront costs of solar panels or don’t have an adequate site for them, he said.

Developers typically offer 10 percent savings, and, with a change in March from net metering to a value of distributed energy resources model, credits are received on a customer’s entire bill, including the distribution portion, Mr. Moaveni said.

Due to upfront costs of $4 million to $6 million — including relatively high amounts to interconnect with the electrical grid — and ongoing costs like maintenance, land leases and customer retention and management, solar projects typically aren’t viable with much taxation, even with NY-Sun incentives and a 30 percent federal tax credit, he said.

Since most projects are financed by banks, they require both a return on investment and relatively low risk of unforeseen costs, Mr. Mouveni said. That’s why stable PILOT payments are recommended, with full tax exemptions suggested for projects smaller than 1 megawatt, he said.

NYSERDA has developed a New York Solar Guidebook for Local Governments to help inform municipalities how to prepare for solar development and a pair of informal calculators to help determine fair PILOT payments.

The agency suggests developers in National Grid territory should annually pay from $1,700 to $5,100 per megawatt to municipalities, which would mean annual payments ranging from $3,400 to $10,200 on 2-megawatt projects.

A separate online calculator will also determine a suggested payment amount based on financial data for a specific project, but Mr. Moaveni said he would expect it to fall within the projected range.

Abundant Solar Energy Inc. has submitted site plans for a pair of community solar projects in the towns of New Bremen and Denmark. While the one in New Bremen has received site plan approval, town officials and developers have yet to come up with a taxation plan for it, since an initial payment suggestion of $3,000 is significantly less than the town would receive on a construction-value-based assessment.

New Bremen Supervisor Peter J. Keys told Mr. Mouveni of concerns about collecting lower taxes on a multi-million dollar project than would be paid by a typical resident. “I don’t see any way that’s viable or an economic benefit to a township,” he said.

“They need to budget more for property taxes,” added Erin Gratch, an assessor for several local towns. “I pay more than $3,000 in property tax.”

Mr. Mouveni said each community’s leaders, not him, must decide whether the electricity savings outweigh minimal tax revenues and “make an informed decision based on reality.”

“Do you want to see a solar project in your community or not?” he said.

Mr. Mouveni did note that any PILOT payment received from a solar project would be “a new source of revenue that otherwise didn’t exist.”

And, even with a PILOT or full tax exemption, solar projects must still pay special district taxes, like fire protection, based on full assessed value, he said.

NY-Sun officials are working on a calculator to determine project assessments based on income, since the cost approach doesn’t accurately show a project’s value and there are no comparable sales available, Mr. Mouveni said. That should offer values that are fair and “defensible in case of dispute,” he said.

Timothy H. Petersen, business development specialist with the Lewis County Industrial Development Agency, encouraged town leaders to set proposed solar PILOT payments ahead of time, either individually or on a countywide basis. “These developers want to know what it’s going to cost to do business here,” he said.

A follow-up meeting could be organized with some solar developers if there is enough interest, Mr. Petersen said.