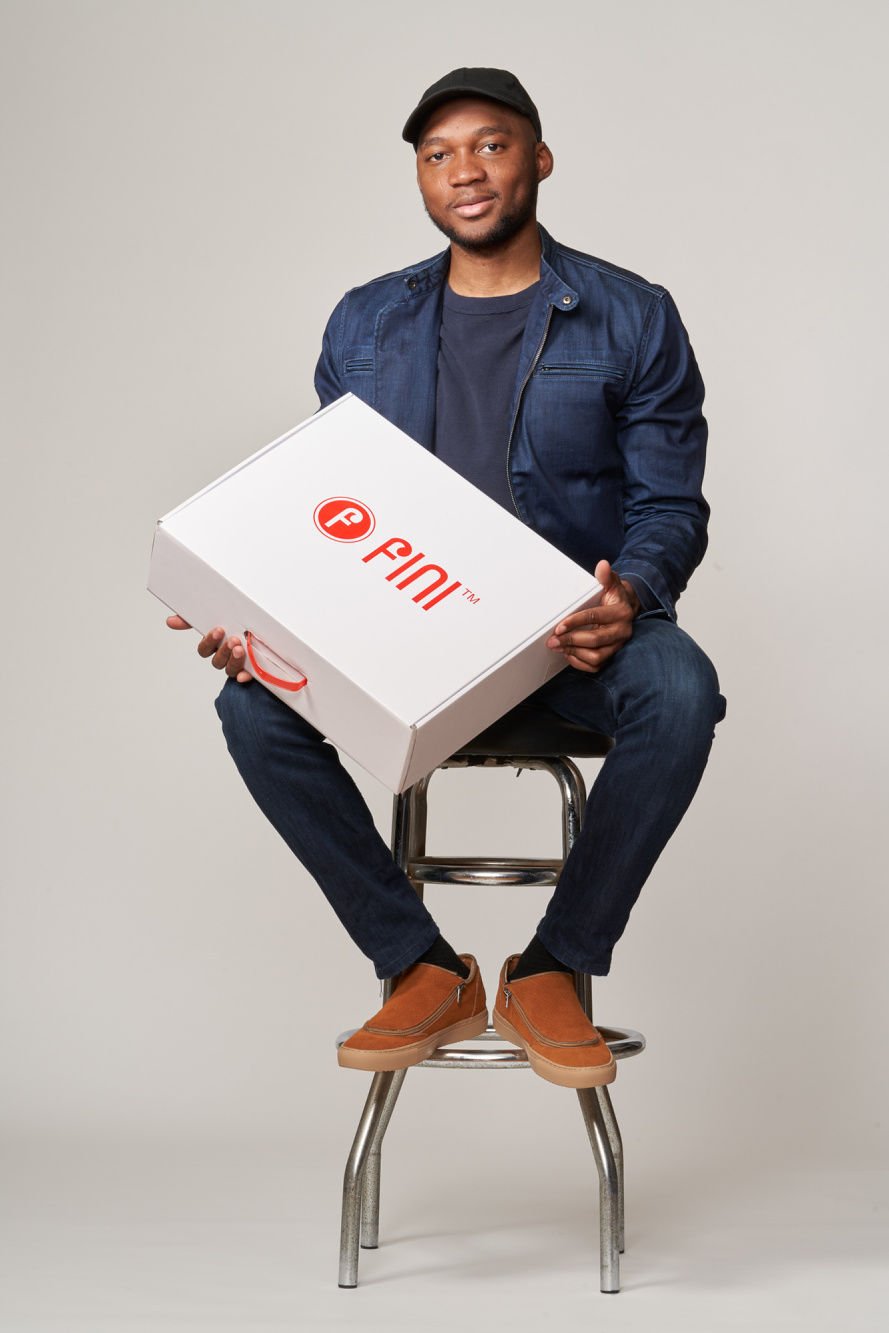 Damilola Adepoju, owner and creator of Fini Shoes, wears his product, the Fini Shoe, and holds the packaging it comes in. 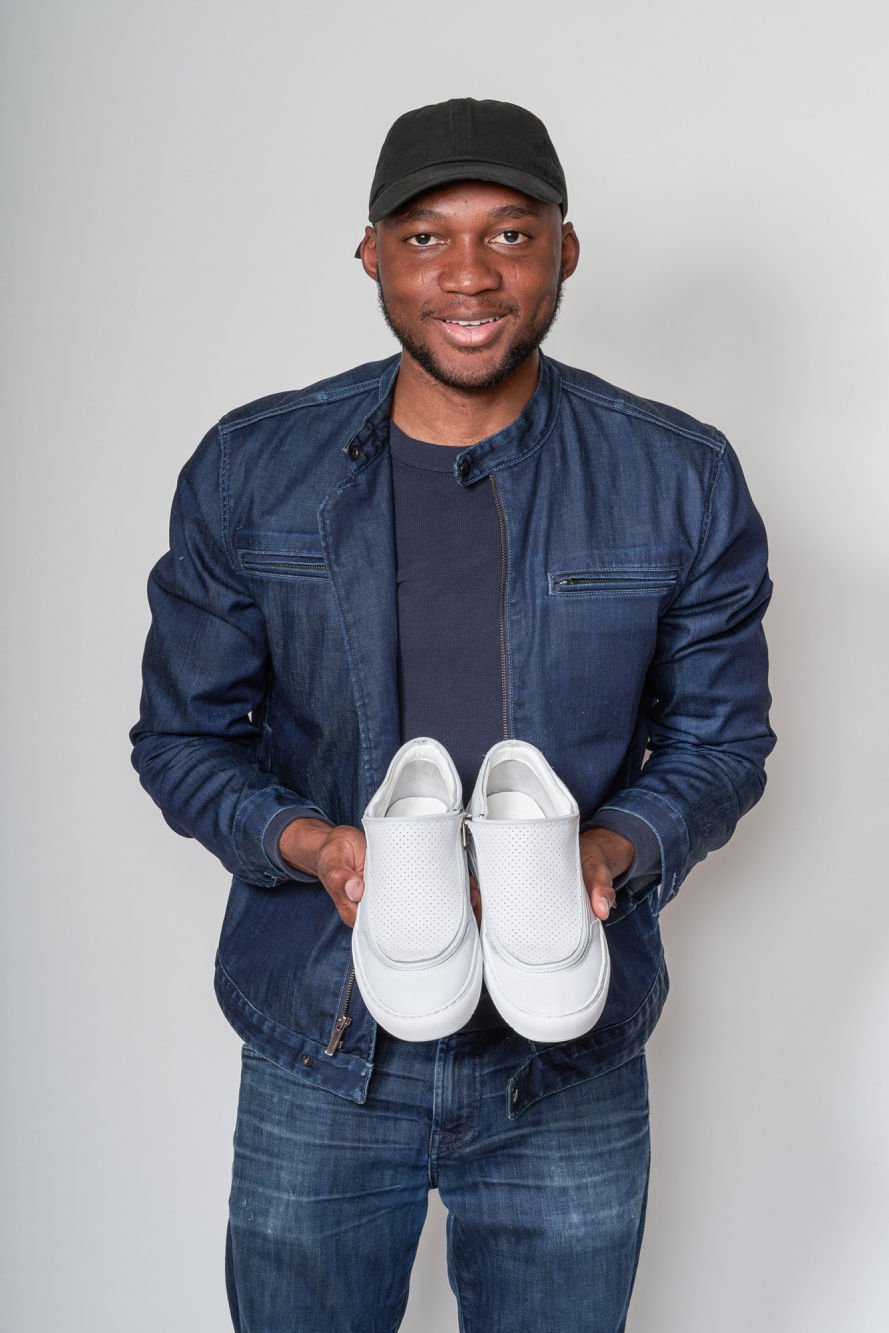 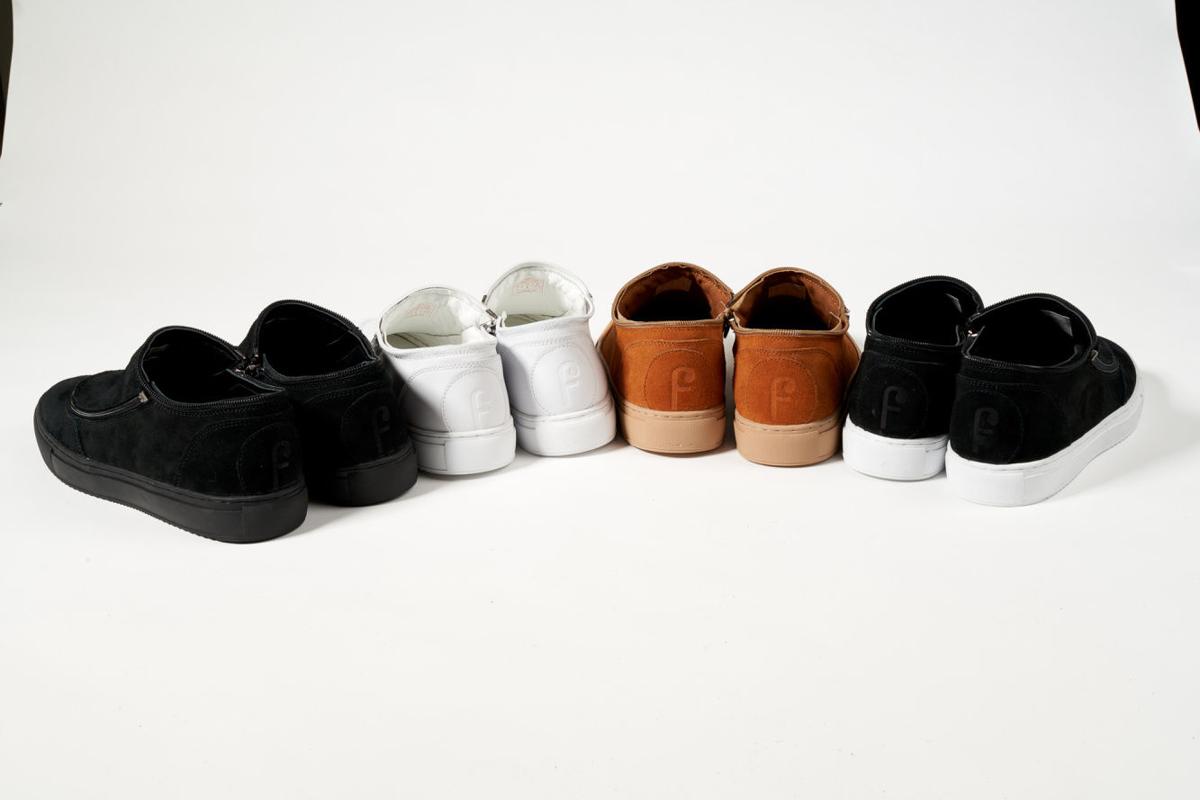 Fini Shoes in the four available colors without added accessories. 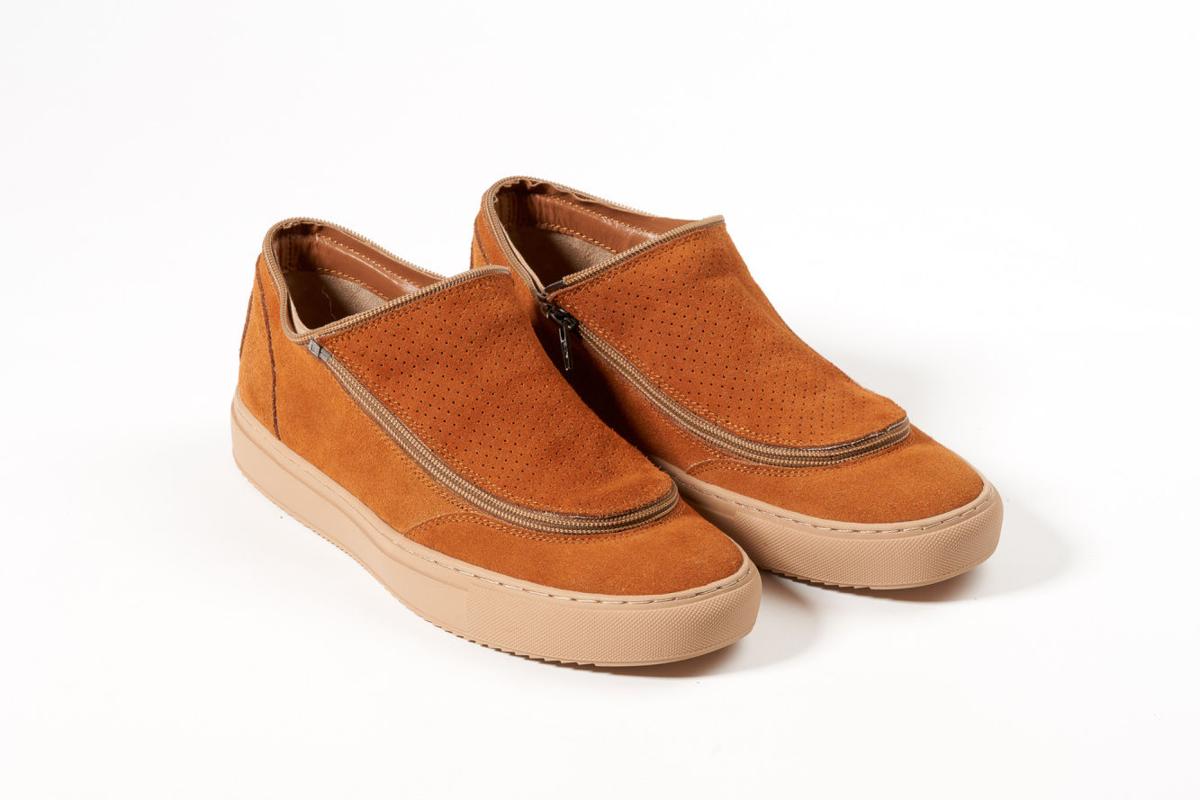 The Fini Shoe without added accessories. 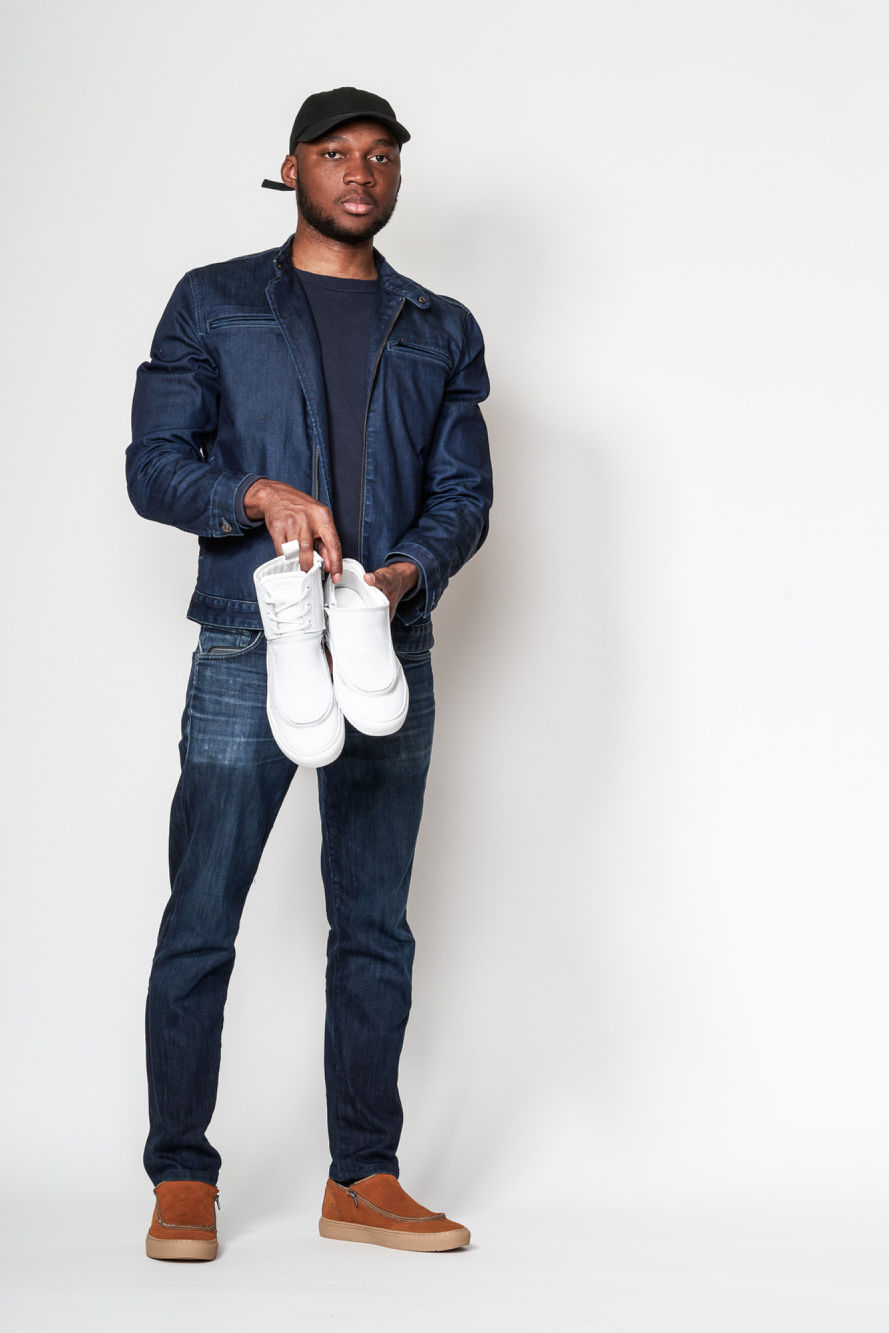 Damilola Adepoju, owner and creator of Fini Shoes, holds and wears his product, the Fini Shoe.

Damilola Adepoju, owner and creator of Fini Shoes, wears his product, the Fini Shoe, and holds the packaging it comes in.

Fini Shoes in the four available colors without added accessories.

The Fini Shoe without added accessories.

Damilola Adepoju, owner and creator of Fini Shoes, holds and wears his product, the Fini Shoe.

The meaning behind the name of the new versatile and changeable shoe belongs solely to the creator, Damilola Adepoju.

“I said, ‘this is perfect. It’s very easy to pronounce and it means something personal to me,’” Mr. Adepoju said.

The Fini (pronounced feenee) in Fini Shoes, is a shortened version of his grandmother’s nickname.

Before he graduated from Clarkson in 2013, Mr. Adepoju received advice from Mathew Draper, head of the Shipley Center of Innovation. Mr. Draper told him to find a name for the product and company that was short and easy to pronounce, hence Fini.

Although not a fashion major, Mr. Adepoju has had a lifelong fascination with clothing.

“My mom instilled in me that the first impression anyone has of you is how you appear,” he said.

In his free time, Mr. Adepoju would examine his style, analyzing the impression he offered to the world. Soon this fascination grew into a passion.

“What are the new trends, the new styles that people are wearing,” he said he would ask himself.

In college, the hobby officially became more as he worked toward building a business.

A finalized idea escaped him, however.

Senior year of college, it hit him. Mr. Adepoju was packing his bags for his spring break trip to Jamaica.

“I was trying to fit everything in one suitcase,” he said, but the different climates — the chill of New York and the tropical weather of Jamaica — required he bring clothes, like a coat, that would be useless upon arriving in Jamaica.

Footwear was pertinent in this problem.

He needed boots for the snow and sandals and shoes for the island. But what if he could use just one pair for both?

With his new product, he hopes to free up space in baggage. By using micro-zippers, wearers could turn a running shoe into a hiking boot. It aims to allow adaptation to the daily life where previously there was none.

The versatile design also gives wearers the opportunity to transform the style of the boot to complement an outfit.

But the creation of a company and a product was not easy, and he just recently was able to make it his only focus.

In March, after countless prototypes that differed drastically in shape, color, look and function, and trying out different factories across the world before choosing one in China, he sold his first pair.

In June, he quit his job at JetBlue Airways to work full time on his product.

His shoes come in four colors: white, all black, brown, and black with a white sole. This will change, however, as he will host a fashion event in September where new styles and colors will be available. Portions of the profit will be donated to a charity whose focus is to prevent bullying, Mr. Adepoju said.

For now, he will stick with shoes, but he said he hasn’t thrown out the idea of applying flexibility and versatility to other outerwear such as jackets and pants.

Fini Shoes cost $120 and ship within two weeks after being on the waiting list, although Mr. Adepoju said the waiting time will decrease as the factory in China grows more efficient at making the shoe.

More information can be found on his website at Finishoes.com.