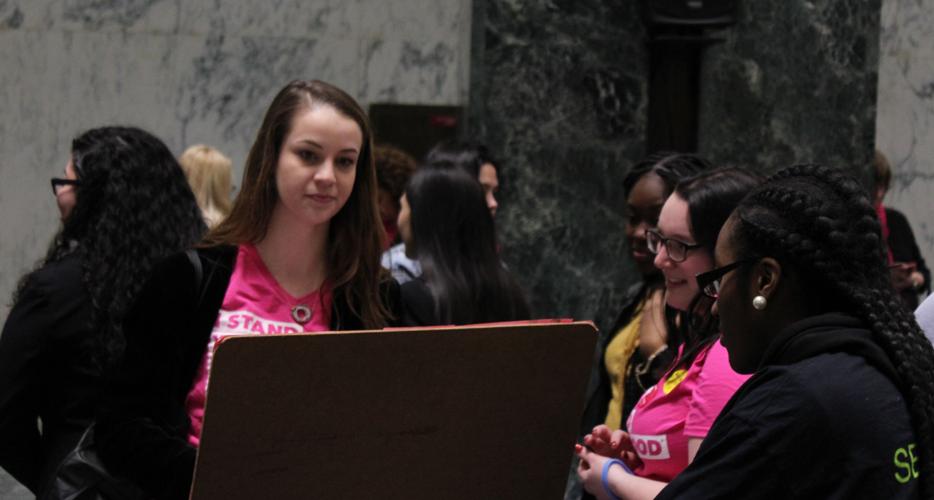 Nicole Sheitz, a CAPP educator at Planned Parenthood of Northern New York, examines one the exhibits at the sex education fair in Albany. 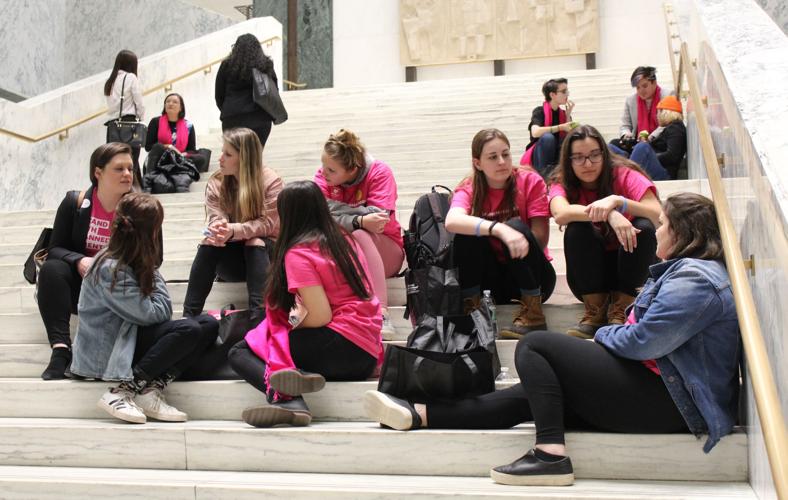 The Watertown Planned Parenthood staff and volunteer advocates rest in the State Capitol in Albany between visits with legislators. 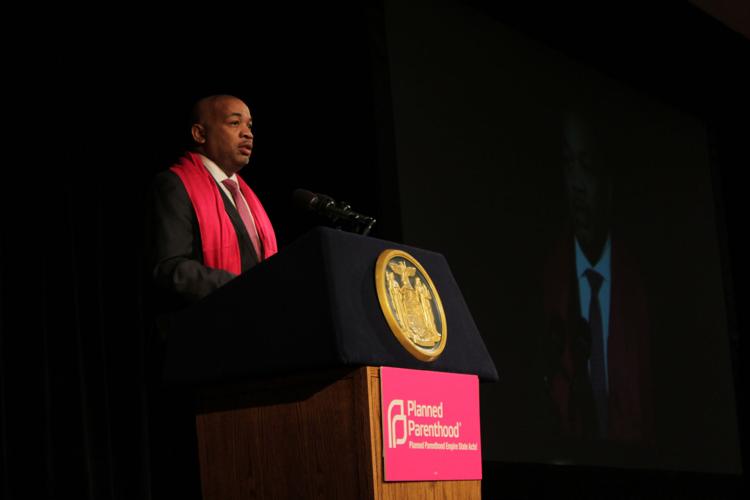 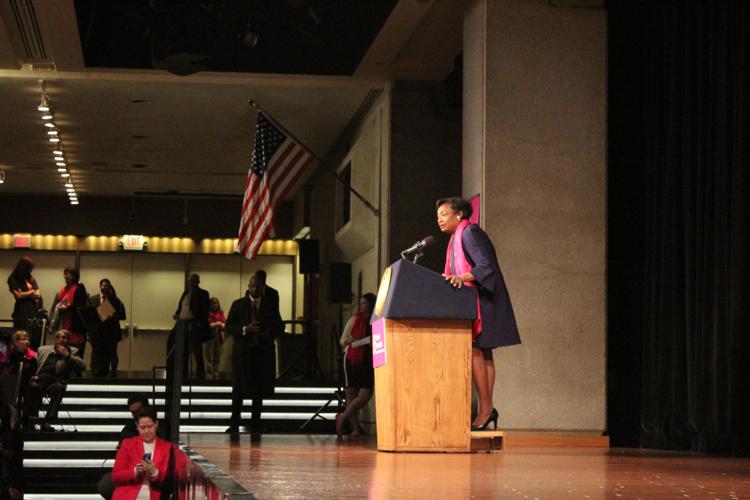 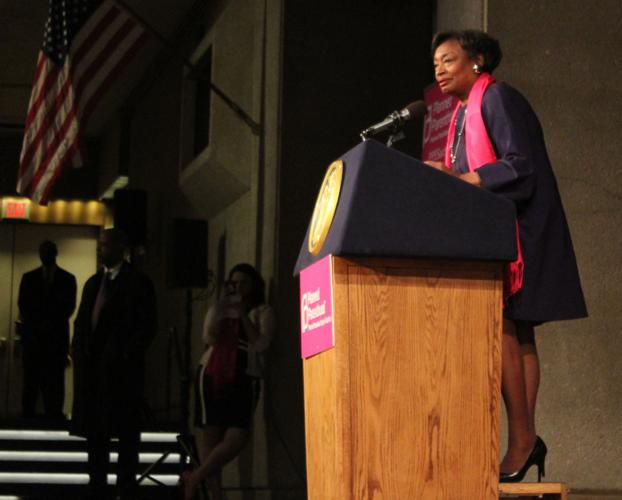 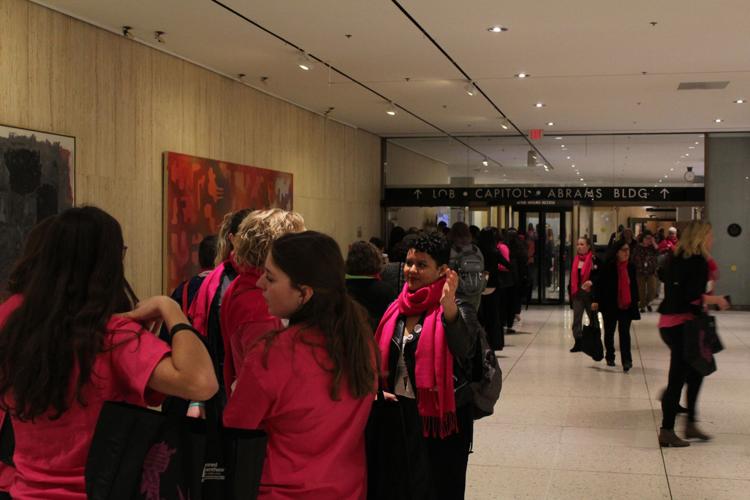 Advocates from all across the state, wearing the signature pink, wait in the security line to enter the legislative offices. 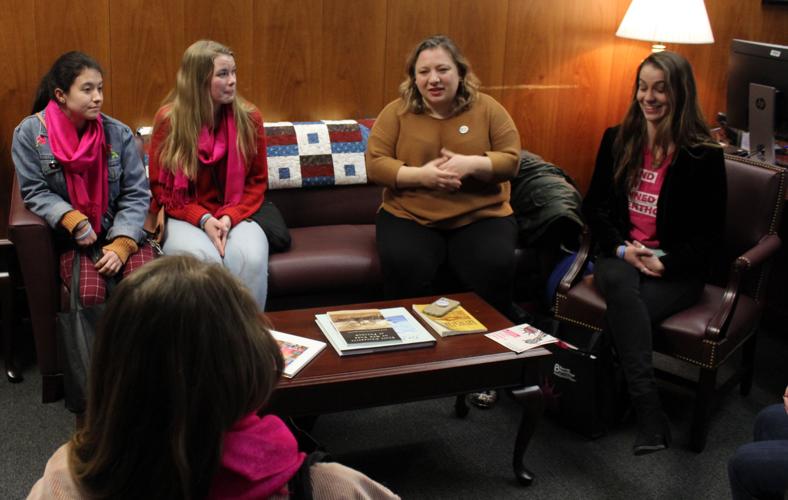 Danielle Castaldi-Micca, vice president of New York Political and Government affairs at the National Institute for Reproductive Health, joined Watertown Planned Parenthood advocates for their meeting with staffers of Sen. Patricia A. Ritchie.

Nicole Sheitz, a CAPP educator at Planned Parenthood of Northern New York, examines one the exhibits at the sex education fair in Albany.

The Watertown Planned Parenthood staff and volunteer advocates rest in the State Capitol in Albany between visits with legislators.

Advocates from all across the state, wearing the signature pink, wait in the security line to enter the legislative offices.

Danielle Castaldi-Micca, vice president of New York Political and Government affairs at the National Institute for Reproductive Health, joined Watertown Planned Parenthood advocates for their meeting with staffers of Sen. Patricia A. Ritchie.

ALBANY — On a bus headed to the state capital, Lauren Zimmerman­-Meade, director of community engagement at Planned Parenthood of the North Country, gave a quick course on how to lobby state legislators to 28 advocates, mostly high school and college students from the north country.

“It’s like having a conversation, except it’s a very specific conversation — and we’re not being confrontational,” Ms. Zimmerman-Meade told her would-be lobbyists, most of whom had never met with legislators before.

“We have, once again, been a leader in New York state — you did that,” said Sen. Stewart Cousins.

But she said there was still more to be done.

“People want to put reproductive health on ash heaps,” she said. “We cannot stop fighting, we cannot rest until people leave us alone.”

North country state representatives, however — mostly Republicans — have not all been cheering Planned Parenthood’s legislative victories, and many have spoken out or voted against them.

The main legislative goals this year that Watertown advocates were asking for was $15 million to replace federal funding for Planned Parenthood that may be lost under new Trump administration measures excluding them as a Title X essential care provider, as well as providing comprehensive, consistent sexual education across the state.

“We have a little bit of an uphill battle,” Ms. Zimmerman-Meade said. “That doesn’t mean we don’t talk to these people.”

“I’m here to listen to you,” Mr. Walczyk said, saying the time for partisanship had passed with the election. “Once that competition is over, it’s time to govern.”

Mr. Walczyk asked about the impact of losing Title X funding for New York state. A number of the students shared personal stories about the services that Planned Parenthood had been able to provide to them, or to their relatives, as well as the importance of sex education.

Janha Mott, a first-year student at Jefferson County College and peer educator for Planned Parenthood, highlighted the gaps she said the organization filled in the Watertown area.

“Without funding we (at Planned Parenthood) can’t do this,” Ms. Mott said. “We don’t get good health education, good sex education in Watertown … we’re not getting the support we need.”

Mr. Walczyk agreed with the need for education.

“No one wants to see unintended pregnancies, and that starts with education,” Mr. Walczyk said.

Speaking to the Times after the meeting, Mr. Walczyk said he appreciated hearing from Planned Parenthood, and that education was common ground.

“It’s nice to start from a place of agreement,” he said.

Mr. Walczyk said that he has had “countless” meetings like these so far with constituents, both in Albany and in Jefferson and St. Lawrence counties.

“It’s one of the most important things I do,” he said. “I’m still proactively listening.”

Because it is budget season, many legislators and staffers were scattered across the State Capitol, and some were unavailable in person. Other groups from the Watertown bus met with Sheila O’Sullivan, counsel for Sen. Patricia A. Ritchie, R-Heuvelton, and briefly with Assemblyman Ken Blankenbush, R-Black River, before laying out their priorities to one of the Assemblyman’s staffers.

Martina Leake, a sophomore at St. Lawrence University and president of the campus affiliate Planned Parenthood Generation Action, participated in the meeting at Sen. Ritchie’s office. Originally from Carthage, Ms. Leake told Ms. O’Sullivan during the meeting that issues like comprehensive and consistent sex education across the state is an issue that young people will vote on.

“I think it really disadvantages kids,” to not have it, she told the Times. “It’s not like a secret kids are having sex and exploring their bodies at a young age.”

Not all the advocates were students, either. Susan Yerdon took the day off from Empire Vision Works, where she has worked for the past 32 years, to come to her first-ever Day of Action. She has been supportive of Planned Parenthood for years, as has her family.

“People look at Planned Parenthood and just think abortion,” Mrs. Yerdon said. “It’s actually the family planning, it’s STDs, it’s student counseling ... even older people can go and have cancer screenings. And it doesn’t matter what insurance you have, how you can pay for it, Planned Parenthood provides necessary health care.

On the bus ride home, the newly minted lobbyists debriefed about their meetings.

Reflecting on his first Day of Action, Eli Rowlands, a senior at Belleville Henderson, said he was glad they got a chance to speak to representatives.

“I feel like what we were doing was really important as young people, because we can’t vote, to have our voices heard in other ways,” he said. “I felt like some of (the legislators) realized that.”