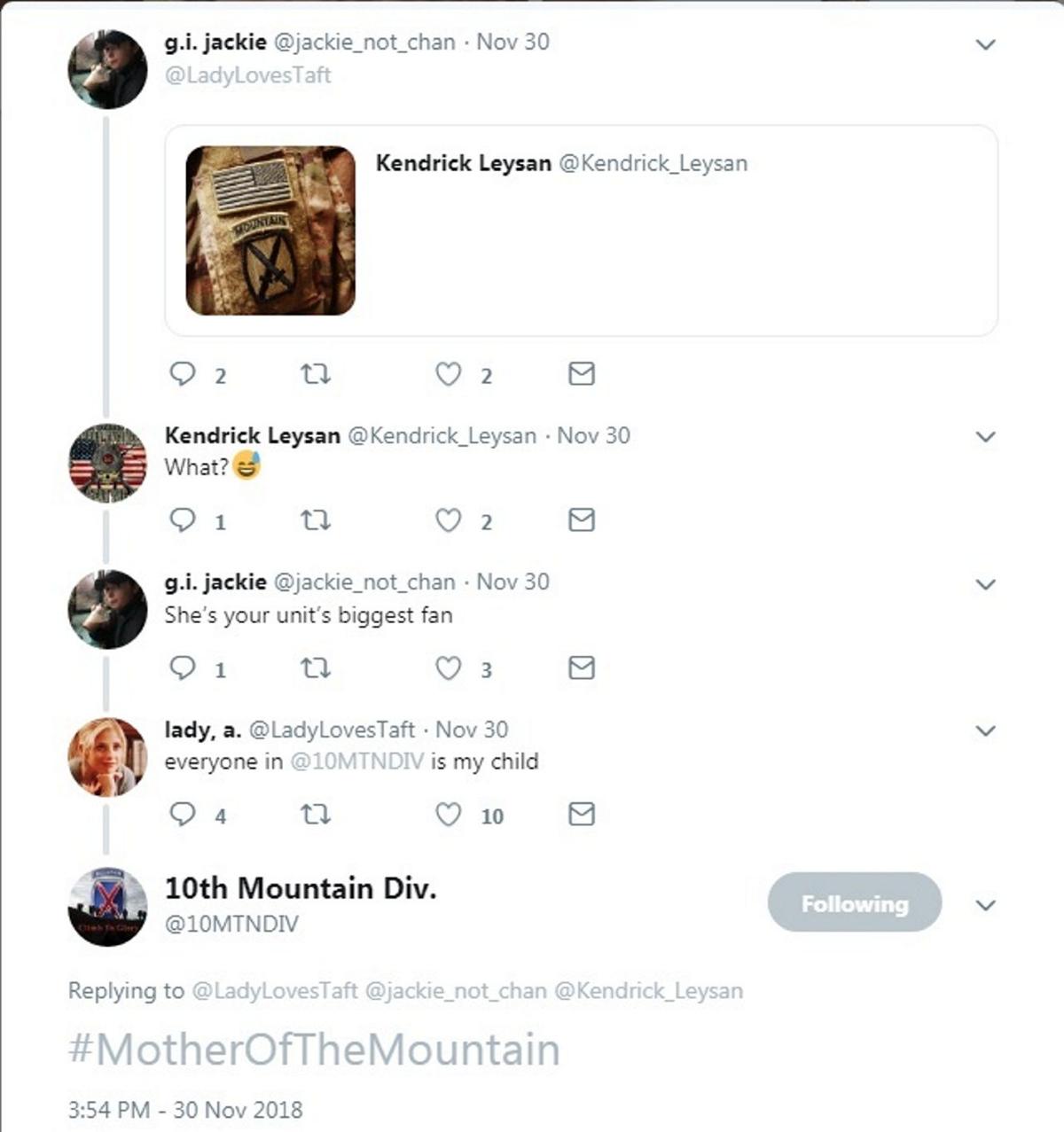 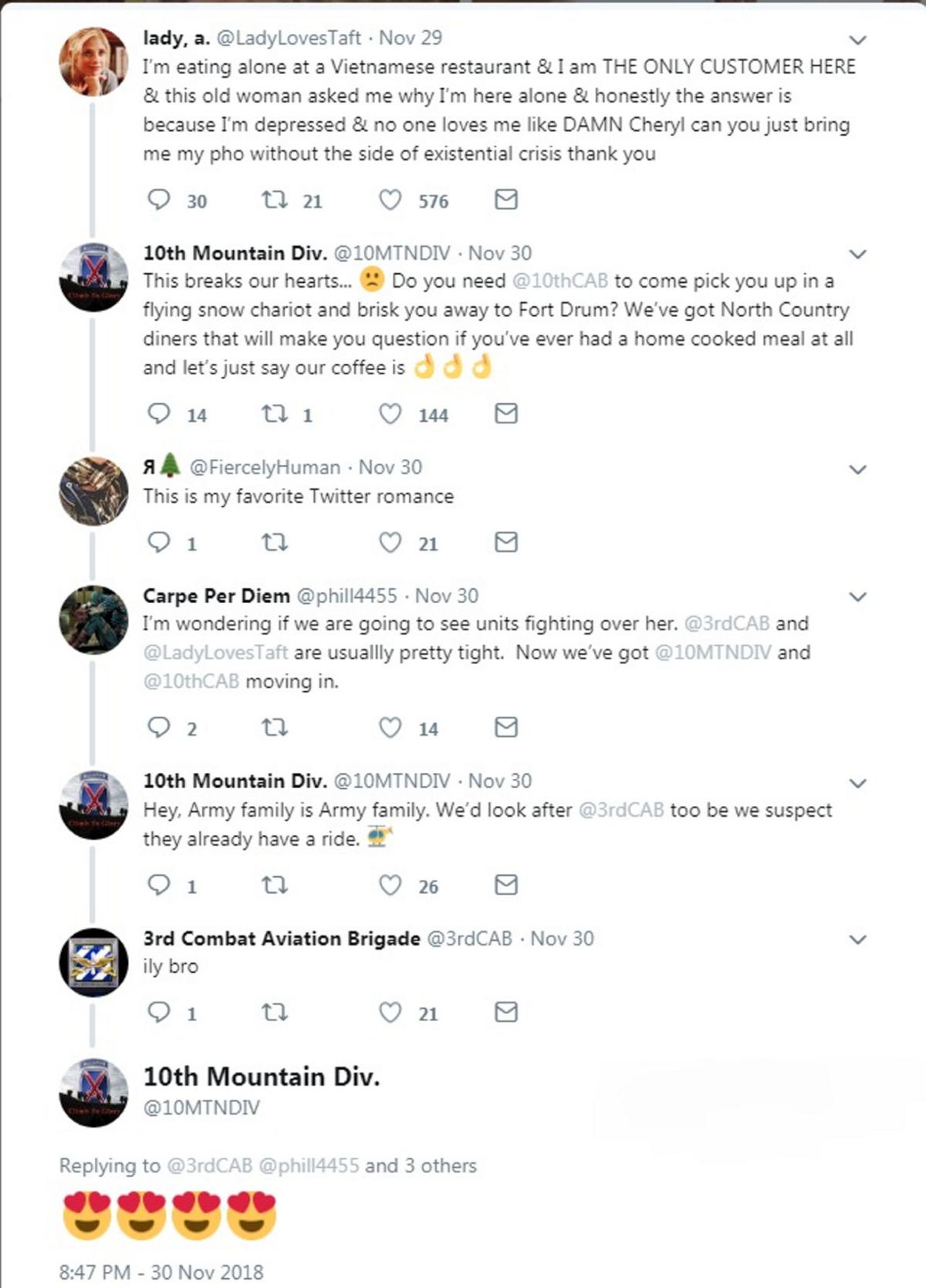 The 10th Mountain Division has recently acquired a mother — a 25-year-old first lieutenant public affairs officer who runs a popular anonymous Twitter page under the handle @LadyLovesTaft — or, to her followers, just Lady.

The relationship began a few weeks ago when Lady, who asked to remain anonymous, decided to boost the number of Twitter followers for the 10th Mountain Division.

“That sort of happened on a whim,” she said. “It was the Saturday after Thanksgiving and I was stuck in a car for six hours.”

Lady noticed that the 10th Mountain Division did not have many Twitter followers compared with other members of the XVIII Airborne Corps, such as the 101st and 82nd Airborne or the 3rd Infantry Division.

So Lady tweeted out to her 10,000 or so followers to go follow them.

“Hello would everyone please follow the @10MTNDIV because it makes me sad that they have fewer followers than brigade pages do. Our snowy brothers and sisters need some love it is COLD UP THERE,” she wrote.

Since then, the follower count on 10th Mountain Twitter has roughly doubled, and the public affairs officers at 10th Mountain have been keeping up a steady banter with Lady, culminating in her being dubbed the #MotherOfTheMountain.

Lady is clear this is something she is doing on her own, and she is not speaking on behalf of the 10th Mountain Division or in any other official capacity. Her private efforts on behalf of 10th Mountain social media have not gone unrecognized, though.

“(We are) extremely appreciative of her support and the love she shows us, hence her unofficial title as ‘mother of the mountain,’” wrote Maj. Harold Huff of 10th Mountain Division Public Affairs in an email to the Times.

“I was really grateful they were such good sports about it,” Lady said. “I think they took it in stride.”

For the 10th Mountain Division, it has been an opportunity to show a more human side.

“Of course we’ve had a boost on our Twitter page from our followers, and we’re very excited that people like what the 10th Mountain Division is doing,” wrote Maj. Huff.“We’re trying to have fun with our audience, while also maintaining the professionalism people expect of a government page. We really want people to feel that they can reach out to us on social media and reach a real person and have a real conversation about the 10th Mountain Division.”

Lady started her account in 2011, but only really got into the world of military Twitter in the spring of this year. Conversational and occasionally crude, she sees her account as a way to humanize service members.

“There’s an increasing distance between us and the civilian populace,” she said. “I do think there’s this veil we throw over service members, this hero status, and we’re just people, too.”

The unofficial side of military Twitter also gives a place for active-duty personnel and veterans to talk, joke, commiserate and learn from each other.

These conversations make the military more transparent to civilians and service members alike.

“It’s cool to see senior leaders on Twitter and sharing their views,” she said. “Civilians might not encounter a military person in their day-to-day life except for something online.”

Lady keeps her account anonymous in part because she does not want the scrutiny of 10,000 strangers, including the inevitable creeps and predators, but also because it generalizes her experience.

“By staying anonymous, I’m this female lieutenant that people can project their experience onto,” she said.

It also allows her the freedom to talk about difficult subjects, including her past experiences with abuse.

“I’d prefer to talk to my commander about some of the things in my past without them finding out about it on Twitter,” she said.

For the official side of military Twitter, social media plays a similar role in providing humanity and transparency — including for soldiers who may be transferred to Fort Drum.

“Official social media accounts are created and managed using federal government resources (including time, manpower, and funds) to communicate the work of the Army,” wrote Maj. Huff. “A lot of Soldiers learn about their next duty station by pulling them up on social media, and we want Soldiers coming to Fort Drum to know what we’re about, and part of sharing our content is presenting it in a conversational manner, which is what we’re hoping people are experiencing now on our social media pages.”

Despite all the joking, Lady takes the rules on military personnel Twitter seriously, avoiding political rants or criticism of her commanders or unit.

“There are no restrictions against service members having social media accounts, except for ensuring they adhere to operational security and the Army Values,” he wrote. “Social Media use is actually encouraged as a means to stay connected and tell the Army’s story. As Soldiers, we travel a lot and social media is a great way of communicating with family and friends.”

As far as family goes, it looks like social media will be the only contact Lady will have with her new children for the foreseeable future, although the 10th Mountain Twitter did offer to sweep her off to experience north country dinners at one point.

“I’m pretty sure they’re joking about that,” Lady said. “It’s pretty cold up there for me, not going to lie.”

But she does have some maternal advice for all the soldiers at Fort Drum.

“I think the 10th Mountain Division is doing incredible work, and I’d tell them to stay warm,” she said.