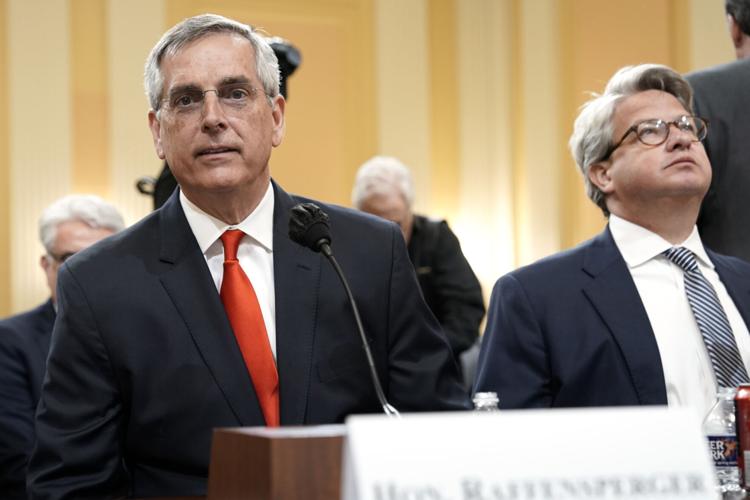 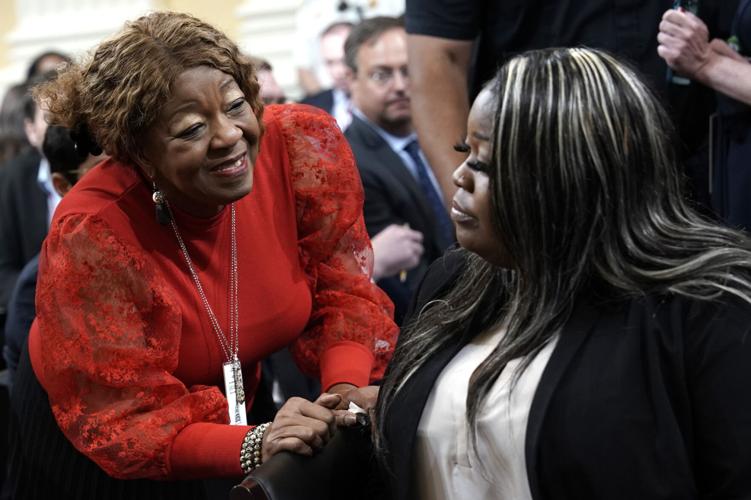 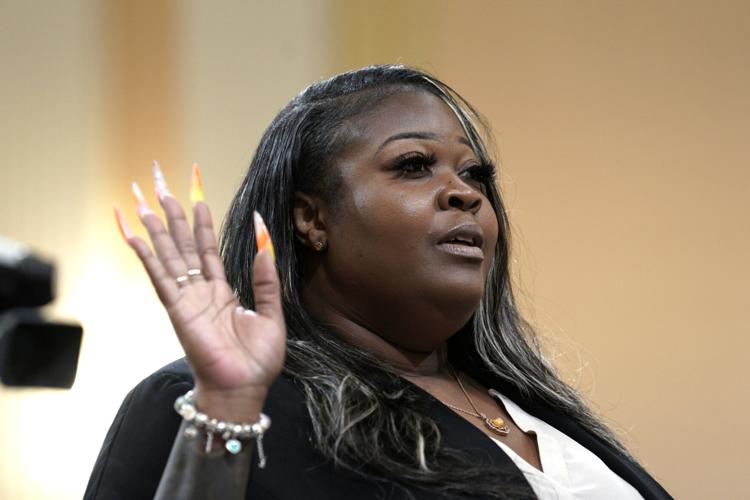 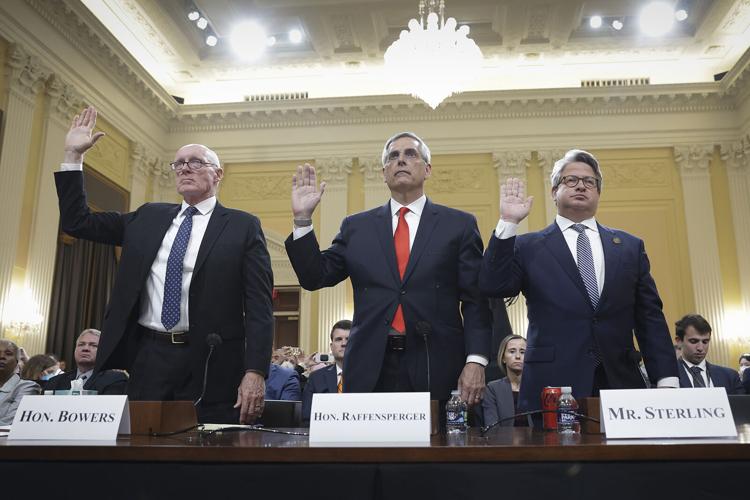 From left to right: Rusty Bowers, Arizona House speaker; Brad Raffensperger, Georgia secretary of state; and Gabriel Sterling, Georgia secretary of state chief operating officer, are sworn in prior to testifying during the fourth hearing on the Jan. 6 investigation in the Cannon House Office Building on June 21, 2022, in Washington, D.C. The bipartisan committee, which has been gathering evidence for almost a year related to the Jan. 6 attack at the U.S. Capitol, is presenting its findings in a series of televised hearings. (Kevin Dietsch/Getty Images/TNS) 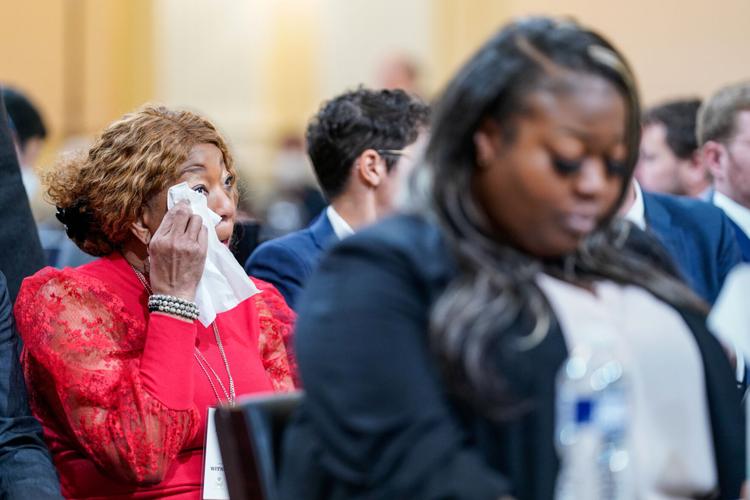 From left to right: Rusty Bowers, Arizona House speaker; Brad Raffensperger, Georgia secretary of state; and Gabriel Sterling, Georgia secretary of state chief operating officer, are sworn in prior to testifying during the fourth hearing on the Jan. 6 investigation in the Cannon House Office Building on June 21, 2022, in Washington, D.C. The bipartisan committee, which has been gathering evidence for almost a year related to the Jan. 6 attack at the U.S. Capitol, is presenting its findings in a series of televised hearings. (Kevin Dietsch/Getty Images/TNS)

WASHINGTON — Republican state legislators and elected officials detailed Tuesday the intense pressure they faced from President Donald Trump and his lawyers to subvert the will of voters and to persuade lawmakers to submit false slates of electors backing him to Congress.

Arizona House Speaker Rusty Bowers, Georgia Secretary of State Brad Raffensperger and Georgia Secretary of State Chief Operating Officer Gabriel Sterling, all Republicans, testified at the fourth hearing of the House select committee investigating Jan. 6, 2021, about the actions of Trump and those in his inner circle, along with Wandrea ArShaye “Shaye” Moss, a former Georgia election worker who gave a wrenching account of racist death threats she and her mother faced after being accused by Trump of processing fraudulent ballots.

“It’s turned my life upside down,” Moss told the committee. “I don’t want anyone knowing my name.”

Bowers gave testimony about the calls he received from Trump and conservative California lawyer John Eastman, and about a meeting with Trump attorney Rudolph W. Giuliani in which the former New York City mayor asked him to overturn the state election results after Joe Biden won and instead submit a slate of electors for Trump.

Bowers said Giuliani pointed out in multiple phone calls that they were both Republicans and said that Bowers had legal authority in Arizona to remove Biden electors and replace them. Giuliani asked Bowers for a committee hearing to do that, and Bowers said he didn’t have such authority. He said Giuliani never provided proof supporting his allegations of fraud in the state’s elections, which included allegations that hundreds of thousands of immigrants in the country illegally had voted in the election.

Bowers said he was never given evidence of fraud in Arizona’s election.

“We got lots of theories, we just don’t have the evidence,” Bowers said Giuliani told him.

When Giuliani continued to press him, Bowers told the president’s attorney that he was “asking me to do something that is counter to my oath when I swore it to the Constitution to uphold it, and I also swore to the Constitution and the laws of the state of Arizona.”

“I will not break my oath,” Bowers said, adding that “it is a tenet of my faith that the Constitution is divinely inspired.”

The committee showed a video detailing how Trump’s plan depended on legislatures in multiple states adopting alternate electors. The then-president leaned heavily on state and local officials to take action while his team of lawyers, including Eastman and Giuliani, relied on conspiracy theories to back the push. State Republican leaders, Trump campaign lawyers and even the Republican National Committee were asked to persuade people to sign certificates to legitimize the false electors backing the president.

“We were useful idiots, or rubes,” Robert Sinners, a former Trump aide, said of pushing the phony elector scheme in Georgia. He told Jan. 6 investigators he’s now “angry” he was misled.

The committee also played a clip of a deposition from RNC Chair Ronna McDaniel, who indicated that Trump called her and connected her to Eastman to help coordinate false slates of electors.

“The campaign took the lead and we just were helping them in that role,” she said.

The committee also showed a text message from an aide for Wisconsin Republican Sen. Ron Johnson to an aide for Vice President Mike Pence asking if he could physically hand a copy of the fake electors certificates from Michigan and Wisconsin to the vice president about 20 minutes before he presided over the electoral vote count on Jan. 6, 2021.

Bowers said when he learned that a false slate of electors from Arizona had sent fake ballots to Washington, D.C., he thought of the book, “The Gang That Couldn’t Shoot Straight” by Jimmy Breslin.

“This is a tragic parody,” he said.

Raffensperger was on the receiving end of Trump’s Jan. 2 request to help overturn Biden’s win, in which Trump told him to “find 11,780 votes, which is one more than we have because we won the state.” Rep. Adam Schiff, D-Calif., said that White House chief of staff Mark Meadows texted or called Raffensperger’s office 18 times to set up that call with Trump.

“We didn’t have any votes to find,” Raffensperger told the panel. “The numbers are the numbers and numbers don’t lie.”

The committee hearing began with footage of a Michigan state senator, whose cellphone number Trump published on Facebook, saying he received 4,000 text messages in a few minutes. Pennsylvania House Speaker Bryan Cutler, who received daily phone calls from Giuliani and Trump attorney Jenna Ellis in the last week of November 2020, recalled protests at his home led by Trump’s former chief strategist Steve Bannon. The committee also showed footage of armed protests outside state capitol buildings, which Schiff called “a dangerous precursor to the violence we saw on Jan. 6.”

Bowers told the committee he got 20,000 emails and tens of thousands of voicemails and texts pushing him to overturn the results and noted he still has groups protesting outside his home on Saturdays, calling him a pedophile, pervert and corrupt politician.

The second part of the hearing focused on the vitriol directed toward Moss, the former Georgia election worker, and her mother Ruby Freeman. They were attacked by name by Trump and Giuliani, who falsely claimed that video had captured the women using a USB thumb drive to change votes.

“What was your mom actually handing you in that video?” Schiff asked.

The Georgia secretary of state’s office conducted an investigation and found no wrongdoing on her part.

Moss said Freeman was instructed by the FBI to leave her home for her own safety for at least two months. Moss also noted that people attempted to conduct a citizens arrest at her grandmother’s home.

“I felt horrible, I felt like it was all my fault,” said Moss, who noted that she and her mother no longer use their names in public and said she rarely leaves the house. “Like, if I wouldn’t have decided to be an elections worker, I could have been anything else. But that’s what I decided to do and now people are lying and spreading rumors and lies and attacking my mom.”

Schiff said in response: “If the most powerful person in the world can bring the full weight of the presidency down on an ordinary citizen who was merely doing her job with a lie as big and heavy as a mountain, who among us is safe? None of us is.”

Also on Tuesday, British filmmaker Alex Holder complied with a subpoena to turn over to the committee documentary footage he filmed during the final six weeks of Trump’s reelection campaign and video of the Jan. 6, 2021, attack on the Capitol. The footage includes exclusive interviews with then-President Trump, his children Ivanka, Eric and Don Jr., and son-in-law Jared Kushner as well as Pence. Holder said in a statement he will sit for a deposition Thursday.

On Thursday, the committee is expected to focus on Trump’s attempts to persuade the Department of Justice to claim fraud occurred in the election and to install a supporter as acting attorney general when those leading the agency refused to comply with his demands.

The committee will continue making the case that if certain elected officials, public employees and judges hadn’t resisted pressure from Trump to overturn the election results, the future of American democracy might have been at stake.

“The system held, but barely,” Schiff said. “And the question remains, will it hold again?”