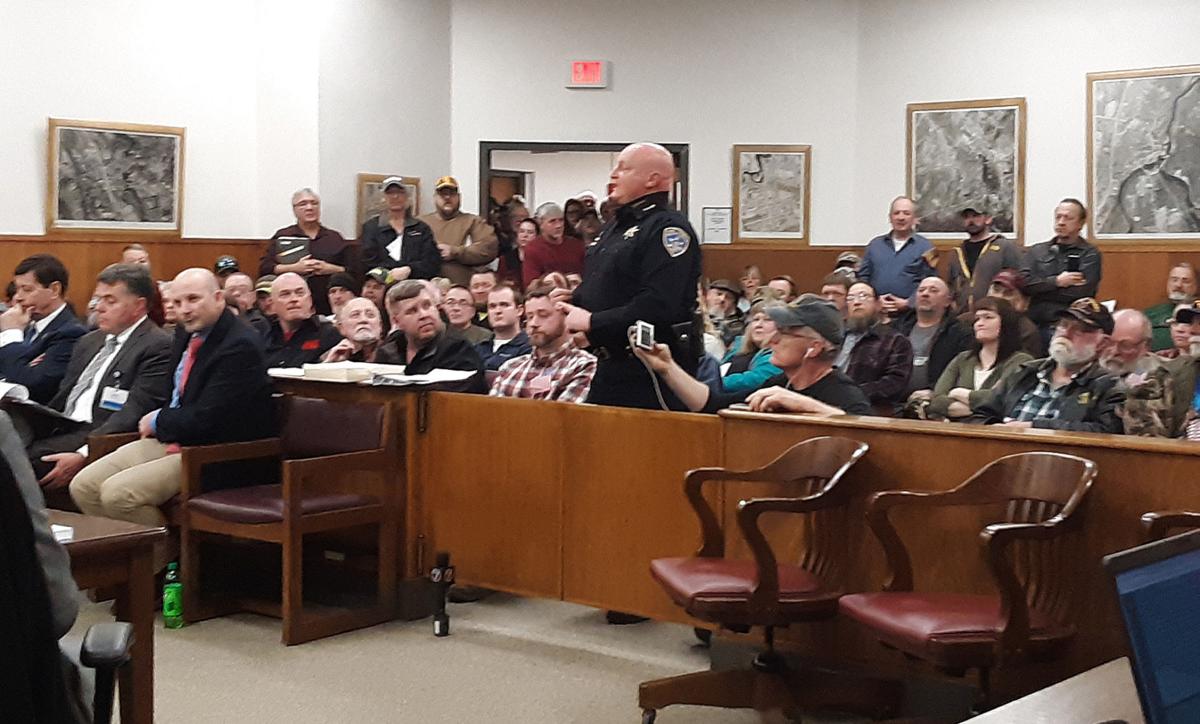 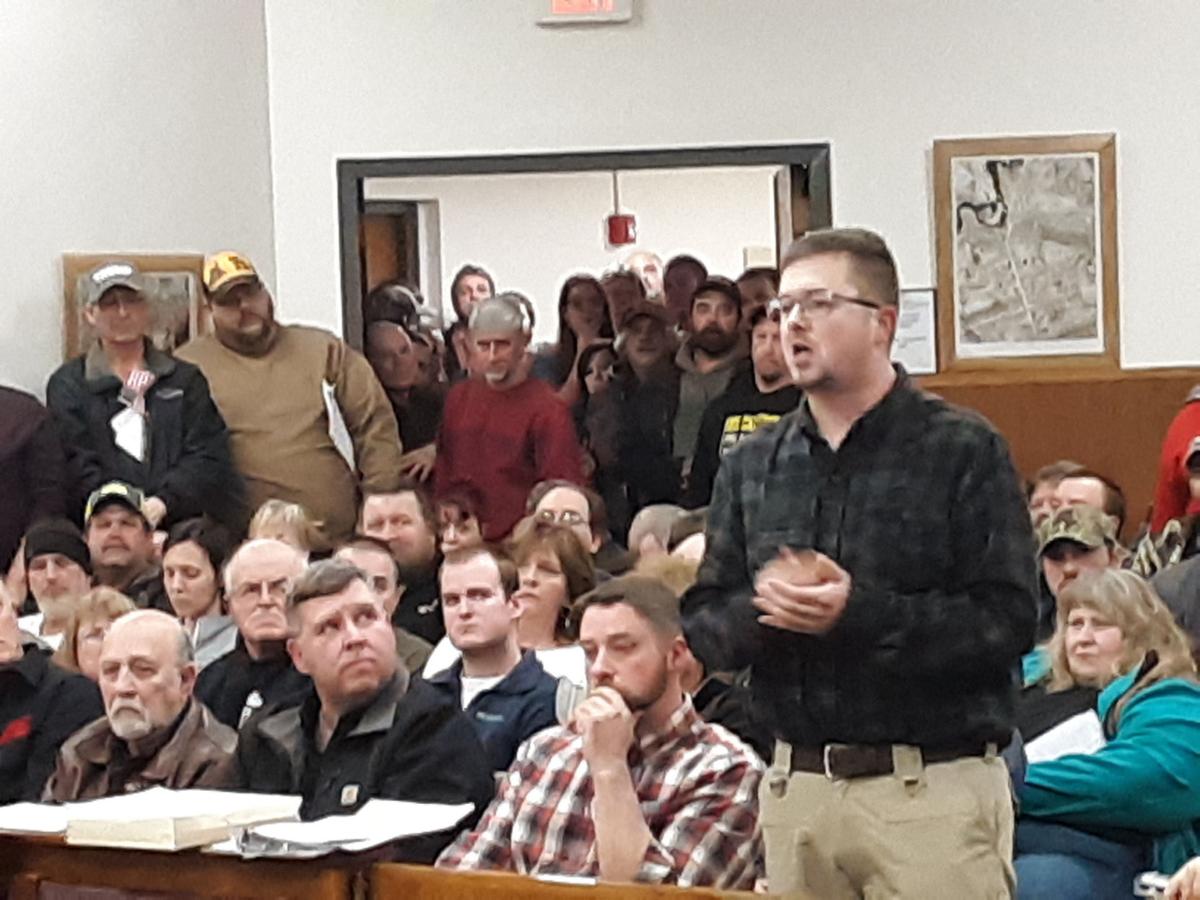 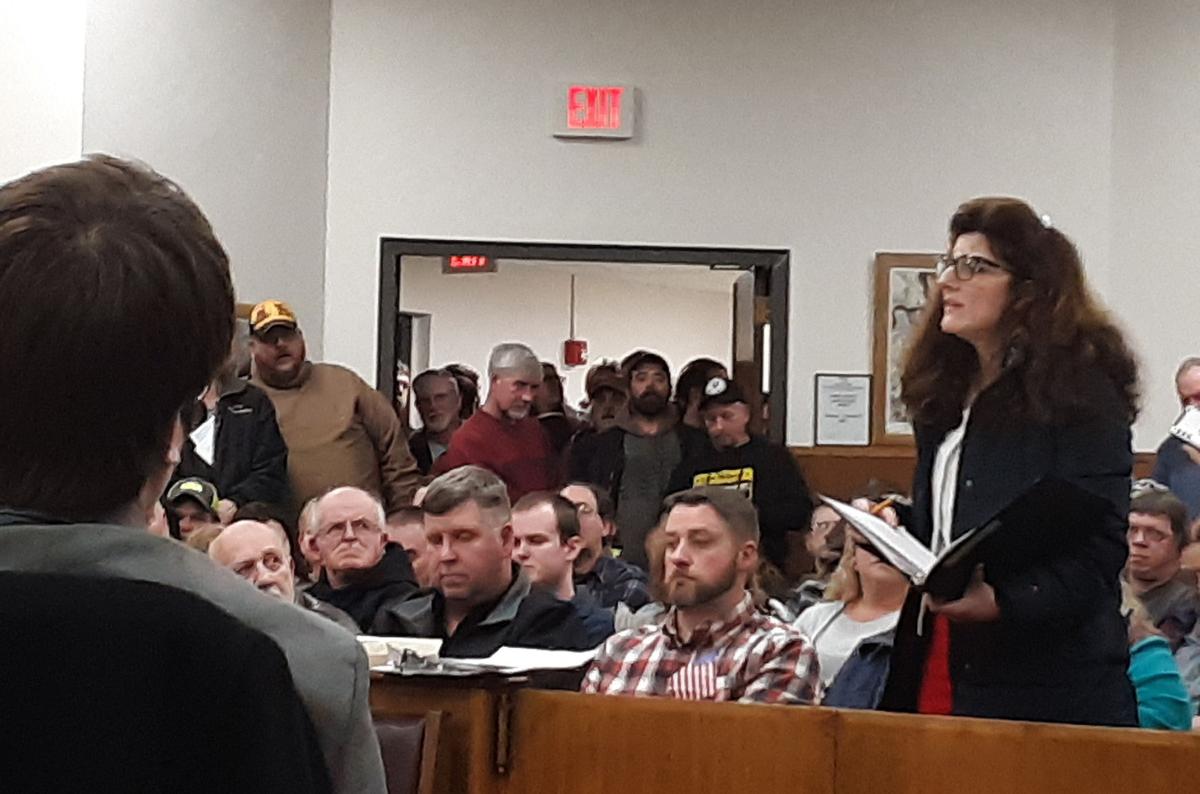 Glenfield resident Christine Mooney told the Lewis County Board of Legislators in Tuesday night’s meeting that the “number one” concern should be the safety of children and that states with weak gun laws, like Mississippi, have the highest rates of gun violence. Mrs. Mooney, a member of Indivisible Lowville, offered counterpoint to the Second Amendment Sanctuary County organizers and supporters that want to compel county officials not to enforce state gun laws. Julie Abbass/Watertown Daily Times

Glenfield resident Christine Mooney told the Lewis County Board of Legislators in Tuesday night’s meeting that the “number one” concern should be the safety of children and that states with weak gun laws, like Mississippi, have the highest rates of gun violence. Mrs. Mooney, a member of Indivisible Lowville, offered counterpoint to the Second Amendment Sanctuary County organizers and supporters that want to compel county officials not to enforce state gun laws. Julie Abbass/Watertown Daily Times

LOWVILLE — The line of people in the Lewis County Courthouse lobby waiting to go through security snaked back and forth three times the length of the space. The board room, second floor hallways, the stairway, the first floor area leading to the stairway were all full of the over 300 people who came through the metal detector.

Over 90 percent of those gathered were there to encourage legislators to make a local law that would prevent county officials, including the Sheriff’s Department, from enforcing state gun laws.

The originators of the Second Amendment Sanctuary County petition brought the document signed by 2,961 people, about 11 percent of the county’s population, and spoke out against New York’s gun laws.

In total, seven people signed up to speak at the meeting: five in favor of the sanctuary law and two in support of strict gun laws.

“This group is specifically concerned with the constant attacks on the peoples’ rights to keep and bear arms, an inalienable right to security protected by the Second Amendment,” said group co-organizer Beau Bailey of Lyons Falls. “We understand that not every resident of the county feels the same way as us. Much like in revolutionary times, there are loyalists that did not agree with declaring independence from Britain.”

In making a point about how he believes statistics can be used to mislead people, Mr. Bailey gave an example of including suicides by firearm in violent crime statistics because suicide is “not a malicious use of firearms toward another individual and hardly can be categorized as a violent crime.”

Christine Mooney of Glenfield did not agree.

“I consider suicide a violent crime and I also consider suicide to be something we need to try to reduce in terms of numbers. The problem with guns are that guns are very effective when someone wants to commit suicide,” she said, adding that with other methods, people often survive the attempts.

The one point both sides of the discussion agreed on is that Lewis County is a safe place to live.

“I feel safe here. New York has the second-lowest rate of gun homicide in all of the 50 states,” said Judy Bentley of Lyonsdale, who moved back to the county to retire.

“It was safe long before these [gun] laws came in and it will be safe long after,” gun shop owner and National Rifle Association safety trainer Patrick Morse of New Bremen said.

Mr. Morse listed the federal regulations Lewis County residents would still follow even if it became a Sanctuary County, noting, “as you can see gun owners are already heavily regulated and enough is enough.”

Mr. Morse and two other speakers spoke specifically against the N.Y. SAFE Act, the gun storage law enacted last year and the Red Flag law put into place at the end of the year.

Resolutions passed by 52 of the 62 counties in New York state against the New York SAFE Act “went ignored” by the state, he said, and a large number of gun laws have been proposed this year as well.

After citing Centers for Disease Control & Prevention statistics about gun violence, including the high rate of gun violence in the U.S. compared to other high-income countries, gun suicides, the number of children shot annually and women shot by domestic partners nationally, Mrs. Bentley said the cost of gun violence in the country is $229 million annually.

“I feel that if the petition is allowed to pass, we will become statistics here in Lewis County,” she said.

Noting that her husband is a hunter who never complains about not being able to buy the guns he wants, Mrs. Mooney said gun rights were “number one,” about protecting children.

“You can go to Mississippi where not only are the gun laws very weak but the homicide and suicide rates are the highest in the nation,” she said.

After the meeting, District 2 Legislator Randy Lachausse said his “mind was made up” even before the meeting because so many of his constituents reached out and told him what they thought.

“The people gave a very passionate presentation and I support them fully,” he said, adding the state gun laws were made without consultation with either the “people that have to abide by or implement these laws,” which he finds unacceptable.

Mr. Lachausse and District 4 Legislator Ian Gilbert both said they believe some action will have to be taken as a result of the effort the group had shown.

The likely next step in the process is to examine the legality of the proposal and eventually for it to be brought to the Finanance and Rules Committee for discussion.

Why does the left glamorize and enforce Sanctuary Cities/States when it relates to illegal aliens whose initial interaction with this nation is to violate our immigration laws and demand protection. Yet, citizens who unite to request their Second Amendment Rights be recognized are vilified and ridiculed.

rbishny - I'm not left, but what amazes me is why any group thinks THEY can interpret ANY part of the constitution so it fits their position, and expects the rest of us to abide by it? OMG... So another group reads the same amendment and claims they're interpretation is you have to be part of a militia to even own a weapon..language is there.. Dude, this is waaaayy above your and my pay grade...that's what courts and judge are for... Your rights are any more or less than mine... BTW... I'm an avid hunter and gun owner...

Albany does not care about the 600 residents of Harrisville. Sorry if their mommies told them they were special. More people live the dorms of Buffalo colleges than live in Lewis County. Get off welfare and maybe people will listen.

Yeah like they listen to the elitist liberals..... Oh yeah that's right they didn't and elected Trump.

Again, when does a group of residents get to read the Constitution and decide that their interpretation is what the rest of us must abide by. I don't get it... regardless of what law we're talking about... So what happens when another larger group in Lewis county decides that "A well regulated Militia" part of the 2nd A means, unless you're in a verified militia, you can't even own a gun? That's why courts and judges interpret laws... not Joe Six Pack... OMG!

They are reading the constitution which is the reason they are asking Lewis County to follow it instead of King Cuomo's dictator laws.

Grrr, not only are republicans incapable of reading, they lie and are ignorant regarding the constitution. You're right, for proof, they support tRump.

the constitution allows for the regulations of guns.

The regulation to the right to bear arms!

THEY don't get to read and interpret the constitution...and expect the rest of us to abide by it dude! Your no more a King than Cuomo...at least he was elected, and elections have consequences...ie Trump

Come on, Gracie---do your homework! The Supreme Court has ruled many times that there's no requirement for civilian gun owners to "join a militia," and that the 2nd Amendment applies to present day gun owners!

that was exactly gracie's point. interpreting the law is a job for courts, not for mobs.

Come on Gracie.... Supreme Court has ruled many times The Constitution & 2nd Amendment apply to current gun owners, and we don't have to join a militia!!! Where you been?

NY Jack. my point is....the "join a militia" crowd .. is just another group that thinks their interpretation is what the rest of us must follow... I don't agree...you make my case, it's the Supreme Court and rulings that decide laws...not a group from Lewis County... Reminder...SP Judge Scalia's comments re – Second Amendment ….“… not a right to keep and carry any weapon whatsoever in any manner whatsoever and for whatever purpose.” Regardless of anybody's position on firearms... along with ":“Like most rights, the right secured by the Second Amendment is not unlimited" .... That ruling is the basis for many of the restrictions....

Amazing, where did you say you went to law school? Major in Constitutional Law?

carpinelli is a farce. His job is to enforce laws, not openly advocate against them. I think it would be sweet for Lewis county to pass a sanitary law and then have Cuomo withhold state aid to the County!

Just like Trump should withhold the aid that Cuomo is looking to get to cover the cost of what he has spent in Puerto Rico? BTW, doesn't Lewis County already have sanitary laws?

LOL, yup Lewis Cty does have sanitary laws. That's what I get for not proof reading with spell check. Withholding funds has to do with sanctuary entities.