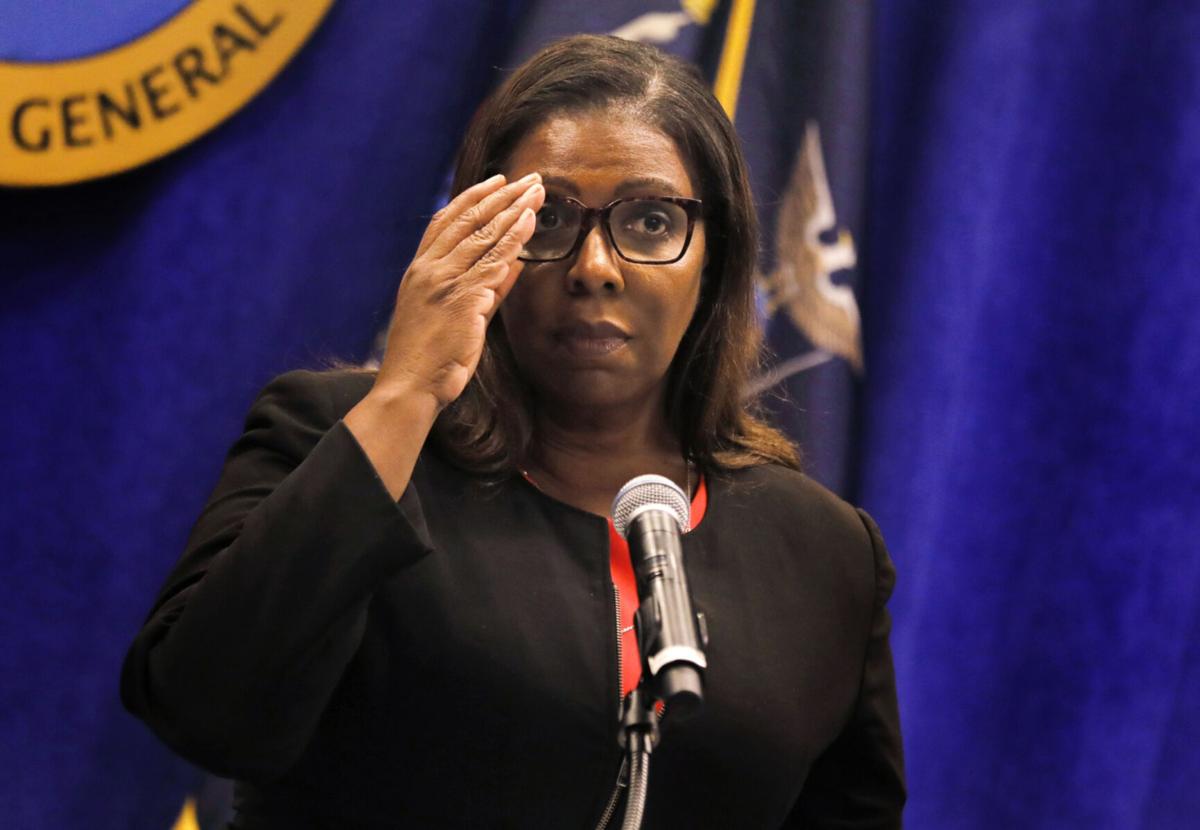 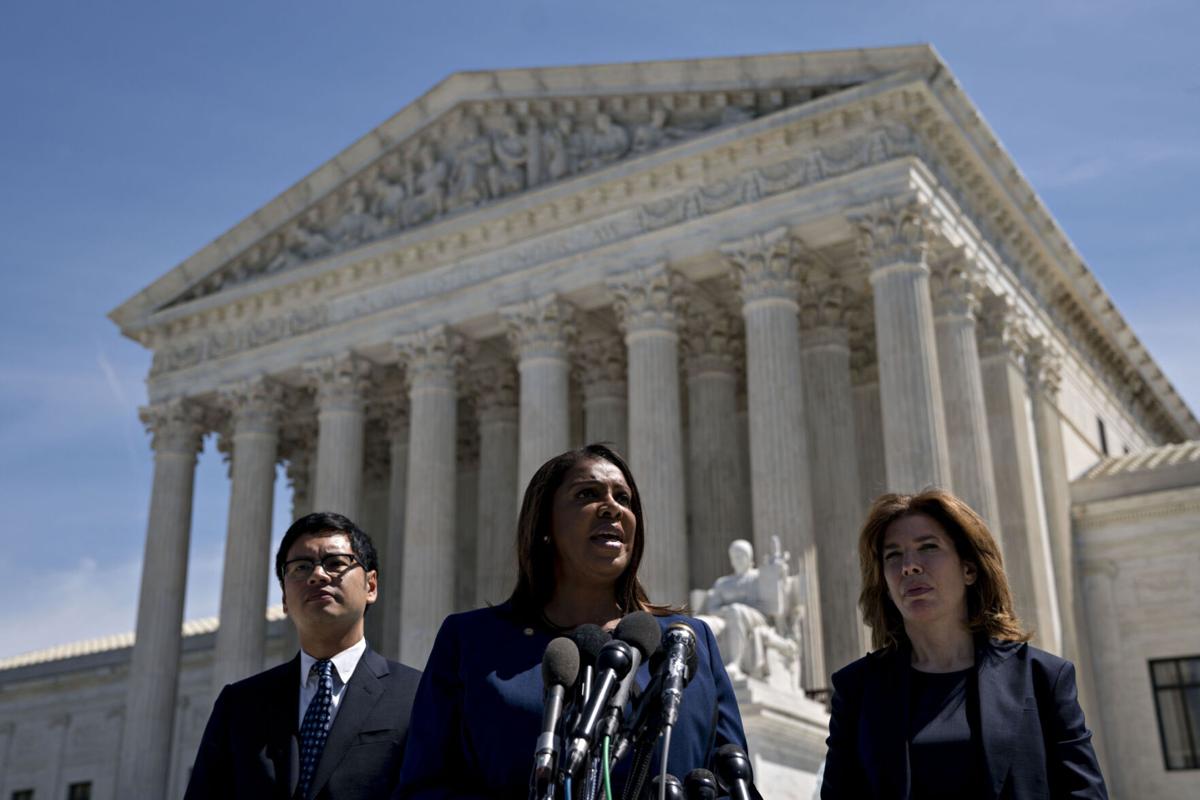 The question is, can she deliver? And, if she can, what will she do next?

The first Black woman to win statewide office in New York, James, 62, has confronted powerful interests as far away as Silicon Valley and as close as her own backyard. Just last week she went after Gov. Andrew Cuomo, announcing she’d found that the state undercounted nursing home deaths from COVID-19 by as much as 50%.

Her string of victories against the Trump administration alone includes everything from worker safety to housing discrimination to the integrity of the census. Her losses include an embarrassing defeat in a first-of-its-kind climate change lawsuit against Exxon Mobil Corp.

“No one like her has ever been in this position before, and she is seizing the opportunity,” said Christine Quinn, a former New York City Council speaker who worked with James for years. “She’s fearless.”

James is proud of the work, which she frequently undertook with other Democratic state AGs, often leading the suits with her California counterpart. The two large states acted as “bookends in defending our democracy” coast to coast, she said in an interview.

“Trump was burning the house down and we attorneys general were putting out the fire,” James said. “It was an administration that can best be described by chaos and confusion and outright hate.” James said she didn’t plan on a national role in “defending our democracy” but is “sure as hell glad” she was there to do it.

Her ongoing investigation of the Trump Organization is to determine whether it falsely reported property values to get loans or tax benefits, which the company has denied, calling the probe politically motivated. The civil inquiry has emerged as one of the greatest potential threats to Trump, who also faces an active criminal investigation by Manhattan District Attorney Cyrus Vance Jr.

“My office is investigating potential civil claims,” said James. “In the event we uncover any criminal activity, it will change the posture of our case. I took a solemn oath to follow the law.”

The bold to-do list doesn’t hurt James with progressive voters, either, putting her political prospects in the spotlight. Her job, in which she oversees 700 lawyers and more than 1,000 additional staff, has been a steppingstone to the highest office in the state. And the remaining two years of her term coincide with whatever Trump, a useful foil, has in mind for a comeback.

“I’m just keeping my head down and doing my work, and we’ll see what the future holds,” said James, who is also the first African American and first woman elected as the state’s chief legal officer. “They say we plan, God laughs. Certainly he’s been laughing all along.”

Among the uncertainties is the Facebook case, in which Douglas Gansler, a Democrat who served as attorney general of Maryland, said James will have a hard time showing harm to consumers.

“There could be a settlement or something like that, but there’s no chance she can win the Facebook lawsuit,” said Gansler, now a partner at Cadwalader, Wickersham & Taft in Washington defending companies in legal actions brought by states. The firm isn’t involved in the Facebook case.

James is confident she’ll win the case, in which she is leading a bipartisan coalition of almost every U.S. state.

“Facebook’s monopoly hurts consumers, it hurts the marketplace, it hurts advertisers, and Facebook users have nowhere else to go,” she said.

James has been “a rising star” in the state’s Democratic Party for years, said Jake Dilemani, who leads political, public and government projects at Mercury Public Affairs. Even if she loses some of the cases, he said, she’ll be “at the top of the list” of contenders to succeed Cuomo, who is running for election to a fourth term next year.

“As long as she continues to take an aggressive stance on issues that matter to New Yorkers and, frankly, to Americans, she’ll be doing a good job, and her work will be viewed positively,” Dilemani said.

James, who went to the City University of New York’s Lehman College and earned her law degree from Howard University, grew up as one of eight children of working-class parents in Brooklyn. Her decision to run for attorney general, one of the most powerful legal positions in the country, was influenced by a chance encounter at a coffee shop, when she was still New York City’s popular public advocate, an elected role with the mayor’s ear.

“A young woman who I know from the neighborhood, who happens to be an undocumented immigrant, came up to me with tears in her eyes and asked me for legal assistance because her husband was being deported,” James said. “I gave her some names of people to call and gave her a hug. That’s what did it.”

Her sense of right and wrong is rooted in her faith. James frequently refers to God in conversation. When she isn’t working, or worshiping at Emmanuel Baptist Church, she likes to walk around her neighborhood, stately Clinton Hill, and talk to people. She’s never been married and says she’s too busy for the usual hobbies.

“I’m married to my work, which is why I’m churning out these lawsuits,” she joked. “If you know of anyone out there. … “

James’s most visible loss so far was a 2018 lawsuit against Exxon Mobil, a case she inherited. In it, New York accused the energy company of violating the state’s powerful securities law, the Martin Act, by misleading the public about its internal efforts to account for the future costs of climate change. James didn’t have to prove intent, or even that any investors were deceived, yet a state judge dismissed the suit in December 2019, saying her experts were “eviscerated” on cross-examination.

Still, those who know James describe her as focused, prepared and unrelenting.

Chelsea Clinton, who helps run the Clinton Foundation, said she approached James at an event around 2014, when James was still public advocate, to praise her “incredible choreography” in tackling the many challenges facing the city.

A few years later, Clinton supported a bill James had sponsored to ban city employers from asking job candidates about their salary history, a practice that undermines efforts to pay women the same as men for the same work. The bill ultimately became law.

What impressed Clinton most was that James insisted the law apply to employers of all sizes, rather than compromise by creating an exception for smaller businesses as some labor laws do, because she knew that many women work for smaller companies.

James can “work on multiple fronts but also make sure all of that work is done with great purpose and attention to detail,” Clinton said.

And sometimes with a dash of drama, Quinn said. She recalled a moment in 2011 when James, then a City Council member, was grilling an official at a public meeting about the city’s botched response to a snowstorm that had crippled the metropolis. Suddenly she pulled out a set of tire chains, which emergency vehicles had lacked. There was laughter. She was dead serious. She then attended meetings on the storm in each of the city’s five boroughs.

She described an episode around 2008 when the city was trying to save money by closing underused day care centers. Quinn said James researched the centers to present Mayor Michael Bloomberg’s office with data — the mayor’s specialty.

City Hall was “pushing really hard, and she pushed back just as hard, if not harder,” Quinn said of her successful effort. “She wasn’t just dogged. She wasn’t just unyielding. She had the facts about utilization and the cultural competence and relevance of these centers. That’s something you know not from paper but from knowing your district.”

That James knows her turf well came in handy for Quinn, who as speaker wanted to immerse herself in the city. James took her to four or five churches in Brooklyn on a Sunday to introduce her around.

“She knew everybody,” Quinn said. “And not just their names. She knew their mothers, their brothers, who wasn’t feeling well, who had just gone to college.”

All those skills are now to be tested as never before. Elaborating on the Facebook case, Cadwalader’s Gansler pointed to what he considers serious flaws.

“Not that big tech does everything completely kosher, but Facebook consumers don’t pay anything,” he said. “And that’s before you get to the fact that the Federal Trade Commission approved Facebook buying Instagram” years ago.

The states accuse the company of stifling competition by snapping up future competitors to protect an illegal monopoly on social media.

“Breaking up Facebook is one of the many remedies that are on the table,” James said.

Facebook has called the allegations a “revisionist history” of acquisitions approved long ago, arguing that people and businesses use Facebook because it offers the most value, not because they’re forced to.

It was “a year of several pandemics — COVID, racial reckoning and economic downturn,” she said. “What we need, now more than ever, is to heal the breach in our nation.”