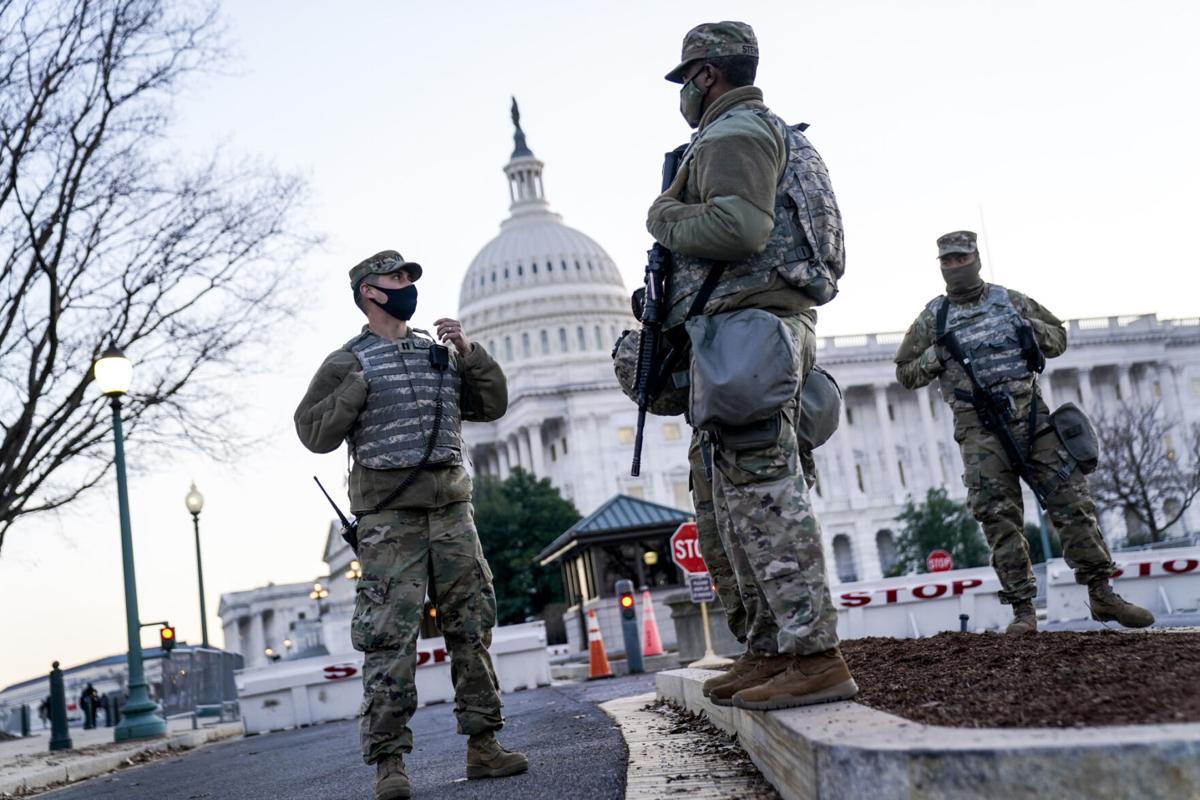 National Guard troops are seen outside the U.S. Capitol on Capital Hill on Jan. 13 in Washington, D.C. The House of Representatives convened for a session to take up articles of impeachment against President Donald Trump, nearly a week after an insurrectionist mob of pro-Trump supporters breached the security of the nation’s Capitol while Congress voted to certify the 2020 election results. Kent Nishimura/Los Angeles Times 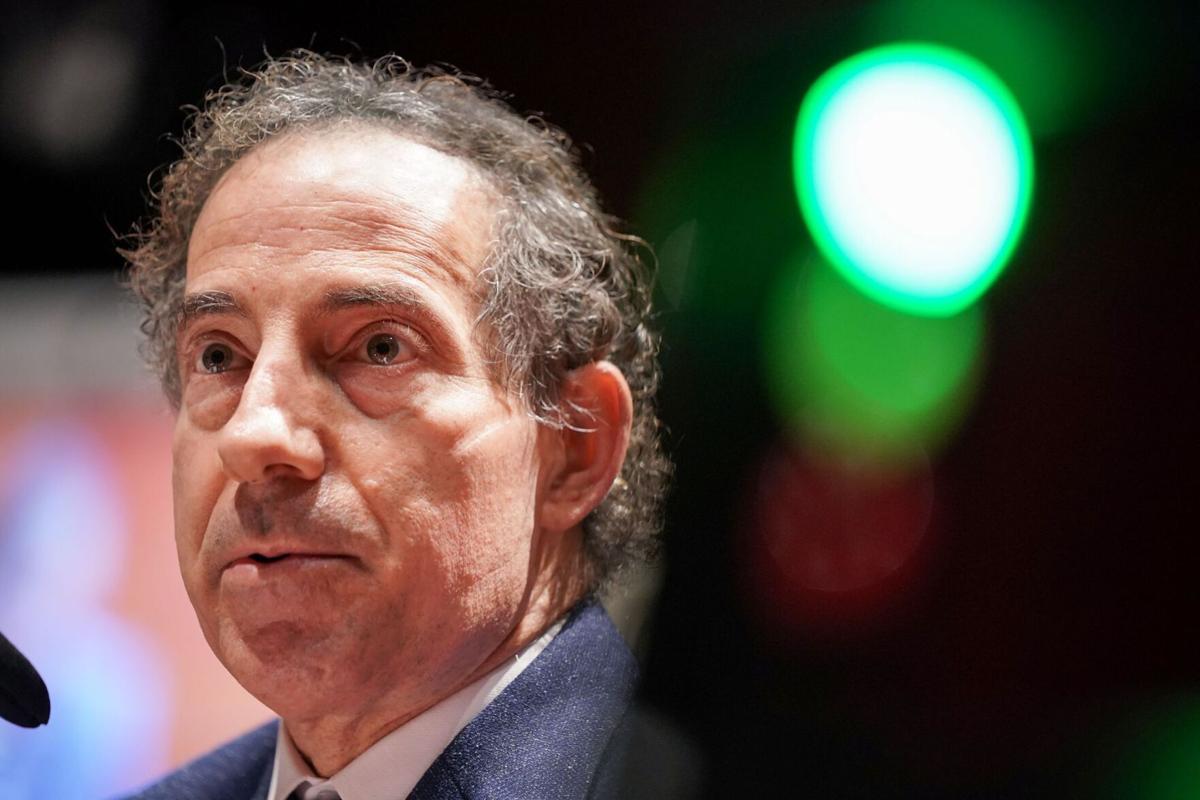 National Guard troops are seen outside the U.S. Capitol on Capital Hill on Jan. 13 in Washington, D.C. The House of Representatives convened for a session to take up articles of impeachment against President Donald Trump, nearly a week after an insurrectionist mob of pro-Trump supporters breached the security of the nation’s Capitol while Congress voted to certify the 2020 election results. Kent Nishimura/Los Angeles Times

WASHINGTON — Former President Donald Trump’s Senate trial will be enveloped by a thick security cordon of razor-wire-topped fencing, National Guard troops and armed police officers protecting lawmakers — a stark reminder of the violent assault on the Capitol that touched off his unprecedented second impeachment.

Walkways and green spaces around the Capitol and adjacent congressional office buildings that are normally plied by tourists and joggers have been off limits since the Jan. 6 riot.

Instead, there are rifle-toting National Guard troops — part of a contingent of several thousand assigned to assist with security — stationed with Capitol police at a checkpoints for entry to the grounds. In addition there are 500 members of the District of Columbia National Guard on standby as a quick reaction force.

“It’s surreal,” said Rep. Andy Kim, a New Jersey Democrat. “I’ve worked in a lot of tough areas before, it is very intense to see this level of structure with such a massive perimeter put forward.”

Scenes from the siege that triggered the extra security will play a major part in Trump’s Senate trial, which starts Tuesday. The House impeachment managers, who will prosecute the case that Trump incited an insurrection, plan to show video recordings of the former president’s speech to a crowd of supporters and the subsequent riot, which left five people dead. The mob overwhelmed police, broke into the Capitol and breached the Senate chamber, where weeks later senators will be sitting as jurors.

Kim, who served in Afghanistan as a civilian strategic adviser to Gen. David Petraeus and Gen. John Allen, toured part of the Capitol security zone with New Jersey Guard members this week.

“We want to make sure that we’re safe, that we can do this work but we got to have some sense, very soon, of what this place is going to be like going forward,” he said.

Christopher Rodriguez, the director of the D.C. Homeland Security and Emergency Management Agency, said at a House Homeland Security Committee hearing this week that while the fencing may eventually come down and the troops will be sent home, it’s unlikely to happen anytime soon.

“We must demonstrate an overt security presence in D.C., at least for now,” Rodriguez said. “We believe that this posture is essential to ensuring that the Metro Police Department can deploy resources to all parts of the city during an emergency.”

Rodriguez said that Washington Mayor Muriel Bowser requested that a contingent of D.C. National Guard troops be on standby through March 12. The Defense Department said National Guard personnel will continue supporting federal law enforcement agencies with 7,000 members, drawing down to 5,000 through mid-March.

A majority of Americans blame Trump for the Jan. 6 breach of the Capitol, with two-thirds saying he bears at a least a moderate amount of responsibility, according to a Associated Press-NORC Center for Public Affairs Research survey published Saturday. However, only 47% say that the Senate should convict Trump.

All Democrats plus 17 Republicans are needed to cross the two-thirds of the Senate threshold to vote to convict Trump. A test vote in the Senate last month indicated that a few GOP members are willing to break with the former president, but far fewer than the level needed to bar him from serving in public office again.

Sen. Chris Murphy, a Connecticut Democrat, said one of the reasons to keep a Guard presence in the Capitol is to give the Capitol Police a chance to prepare a new security plan that takes into account a continued threat from people who want to attack the building.

“I think it’s important to maintain some National Guard presence here in the short term,” Murphy told reporters. “I don’t think the threats have vanished.”

Even as members of Congress are looking to the future, they are still processing their grief from the Jan. 6 attack.

Trump’s second impeachment trial also will bring many of the same security measures that were in place during his first, which began in January 2020. There will be an increased police presence in the Capitol and the surrounding office buildings. Special passes will be required for entry to the building and to the gallery and additional metal detectors are expected to be installed.

Compounding the sense of siege are the precautions in place because of the coronavirus pandemic, which has claimed the lives of more than 450,000 Americans since the first U.S. cases were reported shortly after Trump’s last impeachment trial concluded.

One thing that may not be altered by the new security precautions or the pandemic is the way the trial itself will be conducted. All 100 senators will still be required to sit close together at their cramped wooden desks for hours at a time as they listen to arguments from the House impeachment managers and Trump’s lawyers.

Though most, if not yet all, of the senators have been vaccinated against the virus, there’s no doubt they won’t be able to keep to social distancing guidelines. An all-night series of Senate votes that stretched into the early morning hours Friday offered a preview: Lawmakers clustered in tight groups on the Senate floor as they talked and debated policy, the normal back-slapping and bonhomie of the chamber partly restored, with masks.

Please all lawmakers of our federal government protect yourselves during this exercise in constitutional law. Millions still want to "stop the steal" so please be on guard during this t rial.