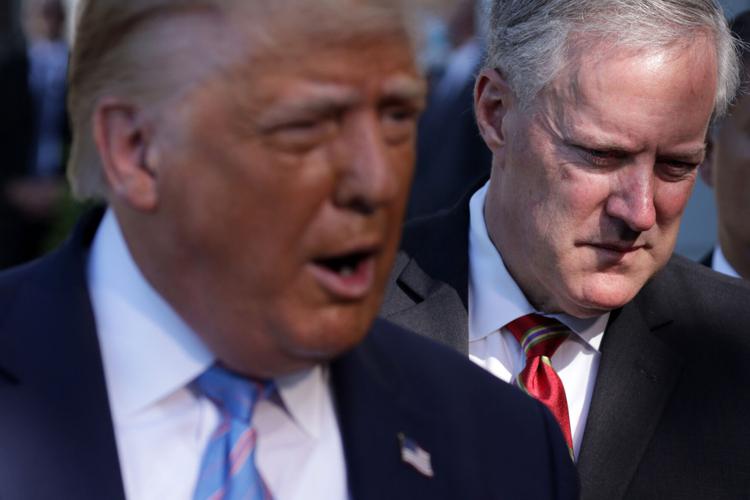 Then-President Trump and Chief of Staff Mark Meadows at the White House in 2020.(Alex Wong/Getty Images/TNS) 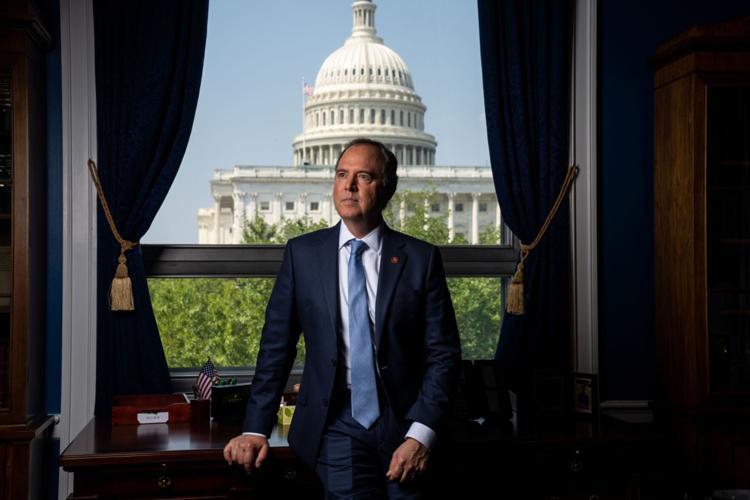 Then-President Trump and Chief of Staff Mark Meadows at the White House in 2020.(Alex Wong/Getty Images/TNS)

WASHINGTON — The House Jan. 6 committee plans to show that President Donald Trump’s then-chief of staff Mark Meadows “had an intimate role ... in this plot to put pressure on (Georgia) state legislators and on elections officials,” Rep. Adam B. Schiff, a member of the panel, told the Los Angeles Times in advance of today’s hearing.

Among other things, Schiff, D-Calif., said the committee investigating the 2021 insurrection at the U.S. Capitol will release new information about Meadows’ appearance at a key election meeting in Georgia and text messages revealing that he wanted to send autographed Make America Great Again hats to people conducting the audit.

Today’s hearing is the select committee’s fourth in a series that aims to demonstrate the former president’s role in the attack.

With a focus on Trump’s efforts to pressure state officials, it will feature live testimony from Georgia Secretary of State Brad Raffensperger — who was on the receiving end of Trump’s infamous request to “find” enough votes to overturn President Joe Biden’s win.

Arizona House Speaker Rusty Bowers, a Republican, will testify about the calls he received from Trump and lawyer John Eastman, and a meeting with Trump attorney Rudy Giuliani, asking him to take action to overturn the election.

Today’s hearing will feature a leading role for Schiff, who has developed a reputation as one of the consummate leaders of House Democrats’ investigations into the Trump administration over the last three years. Schiff had key roles in the Russia and Ukraine investigations, and Trump’s first impeachment trial.

With the Jan. 6 probe, Schiff and House Democrats have a powerful tool they lacked in the previous investigations: Some of Trump’s closest allies have spelled out in sworn testimony the details of the former president’s actions leading up to Jan. 6 and, in many cases, how they advocated against such moves.

In the interview, Schiff, a former prosecutor, expressed surprise that the House committee got so many people to speak on the record.

But he added that if they had spoken out earlier, “we might have been spared all the trauma we went through.”

“Once we got above the level of the Foreign Service and civil service, Trump had such discipline and frankly fear inculcated in his people that they were willing to violate the law and refuse to appear on subpoena,” Schiff said. “It took a violent attack on the Capitol to change that. It should have changed much sooner than that.”

As during the impeachment trial, Schiff sees his role as one of providing accountability.

“During the first impeachment trial, I would always tell my fellow managers that we have to remember who we’re talking to: the four and the 40 million,” he said, referring to the four Republican senators they believed were persuadable and the approximately 40 million Americans they hoped would be, too.

“I still think that’s the audience and I think if any of that audience is watching, they can’t help but be moved by what they’re seeing. And I think they are watching,” he said.

The Jan. 6 committee is made up of seven Democrats and two Republicans — Reps. Liz Cheney of Wyoming and Adam Kinzinger of Illinois — who had already asserted that Trump’s actions led to the violent assault on the Capitol.

The decision by House Minority Leader Kevin McCarthy, R-Calif., to rescind his GOP appointments to the committee — after House Speaker Nancy Pelosi, D-Calif., rejected some — has meant Trump has no allies to defend his position and has allowed Democrats to convey an unchallenged message.

Schiff warned that American democracy remains at risk and that Trump is likely to begin a another run for the presidency by early next year. The message Schiff wants to convey: “The system held, but barely.”

“Our democracy is more vulnerable today than it has ever been. They’re using the same big lie that propelled that violence to disenfranchise people of color, with new voter disenfranchisement laws, to attack independent elections officials,” he said. “And as long as that is the case, then that is where I’m going to have put my focus until we get through this crisis.”

Schiff’s high-profile role has drawn the ire of Republicans. McCarthy has promised to remove Schiff from the panel if Republicans take control of the House.

Schiff denies any partisan motives, insisting that his longtime focus on national security, foreign policy and his constituents has remained constant.

“Donald Trump moved the Republican Party away from being a party of a conservative ideology, and turned it in to a kind of cult, an anti-democratic, anti-truth cult. And if opposing that (and) defending our democratic institutions made me into a partisan or made me appear partisan, then so be it,” he said.

But three years of investigating the Trump administration have proved to be politically advantageous for Schiff as he considers whether to make a run for House leadership or for a U.S. Senate seat from California.

He is second to Pelosi in raising money and giving it to other House Democrats, raising nearly $80 million for House Democrats’ campaign arm and other Democratic candidates since 2016. His name recognition across the country and in California has grown substantially since 2019.

Both factors have bolstered his resume just as House Democrats contend with the likely scenario that this term is Pelosi’s last leading her caucus. Her departure after 19 years of leading House Democrats is expected to ignite a tumultuous race to succeed her.

While Rep. Hakeem Jeffries, D-N.Y., is widely considered to be the front-runner for the post, Schiff has begun talking with his fellow House Democrats about making a run for the job. If Trump puts together a 2024 run, Schiff could argue that he is best positioned to take over Pelosi’s role of standing up to the former president.

However, many House Democrats have quietly said they want to see a person of color or a woman succeed Pelosi.

Schiff is also considering entering the expected 2024 race to succeed California Sen. Dianne Feinstein, assuming she does not run again, a contest that is expected to draw a wide range of interest.

Schiff declined to get into detail about his future ambitions. He is now serving as battleground finance chair for House Democrats’ campaign arm, responsible for mentoring and raising money for vulnerable members and Democratic challengers.

“We’ll cross the leadership bridge when we get to it,” he said. “Speaker Pelosi has done a Herculean job of keeping our caucus together — a caucus as wonderfully diverse as ours. And whoever has that role in the future is going to find out just how difficult it is.”

Yet he is already stitching together his campaign messaging — a combination of advocacy for democracy and focus on the economy.

“Part of the reason why America has been such fertile soil for the rise of Donald Trump’s brand of xenophobic populism is because the economy hasn’t worked for too many millions of Americans,” he said. “I view those two issues as intertwined and vital for our leadership now and in future to address.”