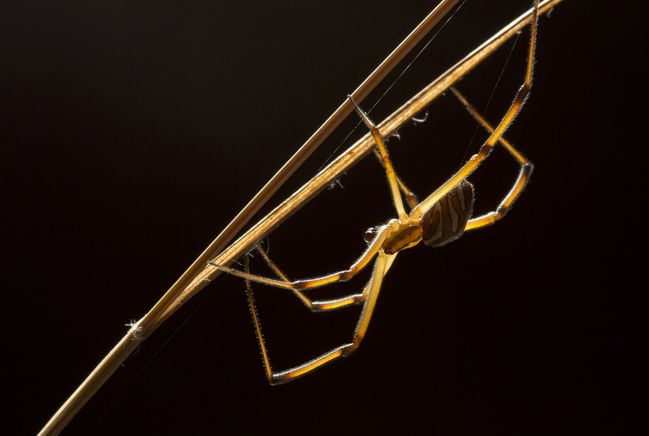 Competition among these male spiders is fierce. So suitors take advantage of clues left by their reproductive rivals. Sean McCann via New York Times 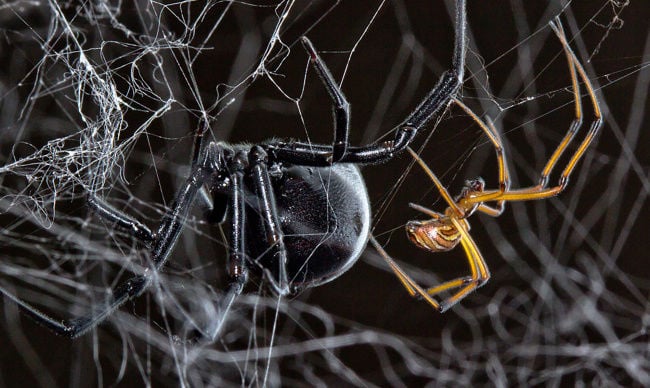 Competition among these male spiders is fierce. So suitors take advantage of clues left by their reproductive rivals. Sean McCann via New York Times

It’s a myth that black widow female spiders always kill and consume their mates. But courtship remains perilous for males, cannibalism or no. The terrain, navigated in the dark, is challenging. The female’s web releases come-hither pheromones, but only about 12% of prospective males manage to reach it. And once there, they can expect to face male rivals competing to pass their genes on to the next generation.

Usually, this results in wild displays of machismo. The males slash the female’s webs to make them less enticing to others. They deposit “mating plugs” in the female’s body to block rival sperm.

Why not simply avoid the competition and seek out females’ webs empty of other males? But male black widows actually seem to thrive on the competition, according to a study published Wednesday in the Proceedings of the Royal Society B: Biological Sciences. Researchers found that male black widows find potential mates faster by following the silk trails left behind by other males.

“Males have to race to find females,” said Catherine Scott, an arachnologist at the University of Toronto Scarborough in Canada and the study’s lead author. “It makes sense for them to try to use all the tricks they can to find females as soon as possible, even if there are other males that have already found her.”

If a male arrives an hour or two late at a female’s web, he still has a chance to interrupt the courting rituals of other males and could still be the first to mate with the female, Scott said.

Males typically make their way to a rendezvous by following female pheromones back to their source. But those signals must be at just the right distance and uninterrupted by shifting winds and other factors.

Scott and her colleagues were curious to know which tools males would employ when their access to female pheromones was limited. The researchers started by marking several males with different paint colors and releasing them at different distances from a large female’s web.

Most males reached the web within a couple hours. Indeed, those who started from farther away arrived at the female’s web just as fast as their rivals: They simply followed the silk threads released by the males ahead of them.

“The silk threads act like a highway connecting the tops of plants,” Scott said. “So following this path is more efficient than trying to make their own way, climbing over obstacles and making sure they are still going in the right direction just based on pheromones carried by the wind.”

To confirm the results, Scott and her colleagues repeated the race in the lab, where the conditions of the males’ journey to the web could be more tightly controlled. The males were given two options in a maze: Follow the silk threads of a rival black widow male, or avoid the rival’s trail and instead rely on direct personal signals from a female, which were blown in his direction with a fan.

Ninety-five percent of male black widows chose to follow the paths made by their rivals, even when the pheromones were readily detectable. And the males seemed to know when the trails were left by other black widows rather than by males of other species.

One question that remains: Can males determine how long ago a rival produced the silk trail? It may be that a rival’s trail provides temporal as well as geographical information, signaling to followers whether they will be too late to get to a female or whether speeding up can still get them to the business of breeding.

“It’s possible that the silk trail is more useful than we thought,” Scott said.