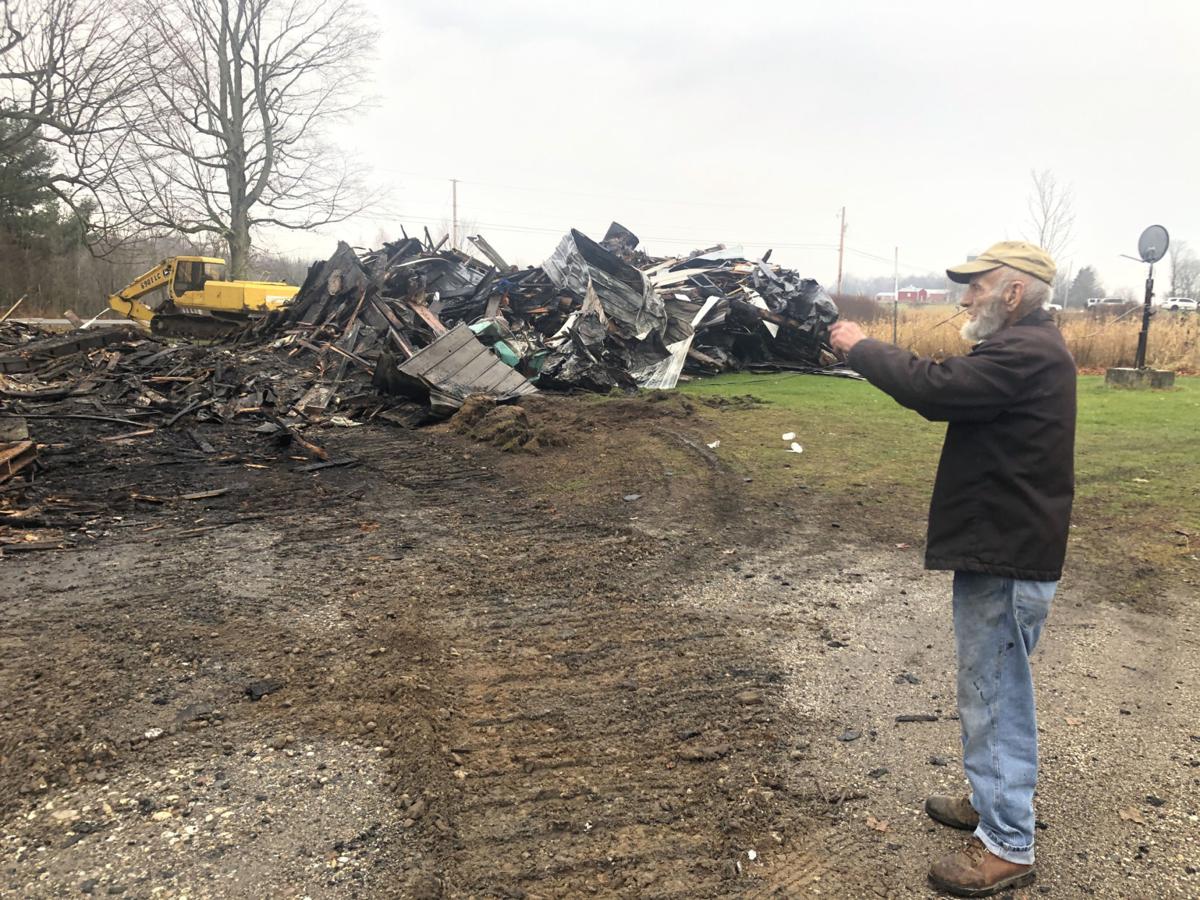 Gerald Pickert stands near the remains of his house Wednesday at 35201 County Route 194 in the town of Antwerp. Ben Muir/Watertown Daily Times 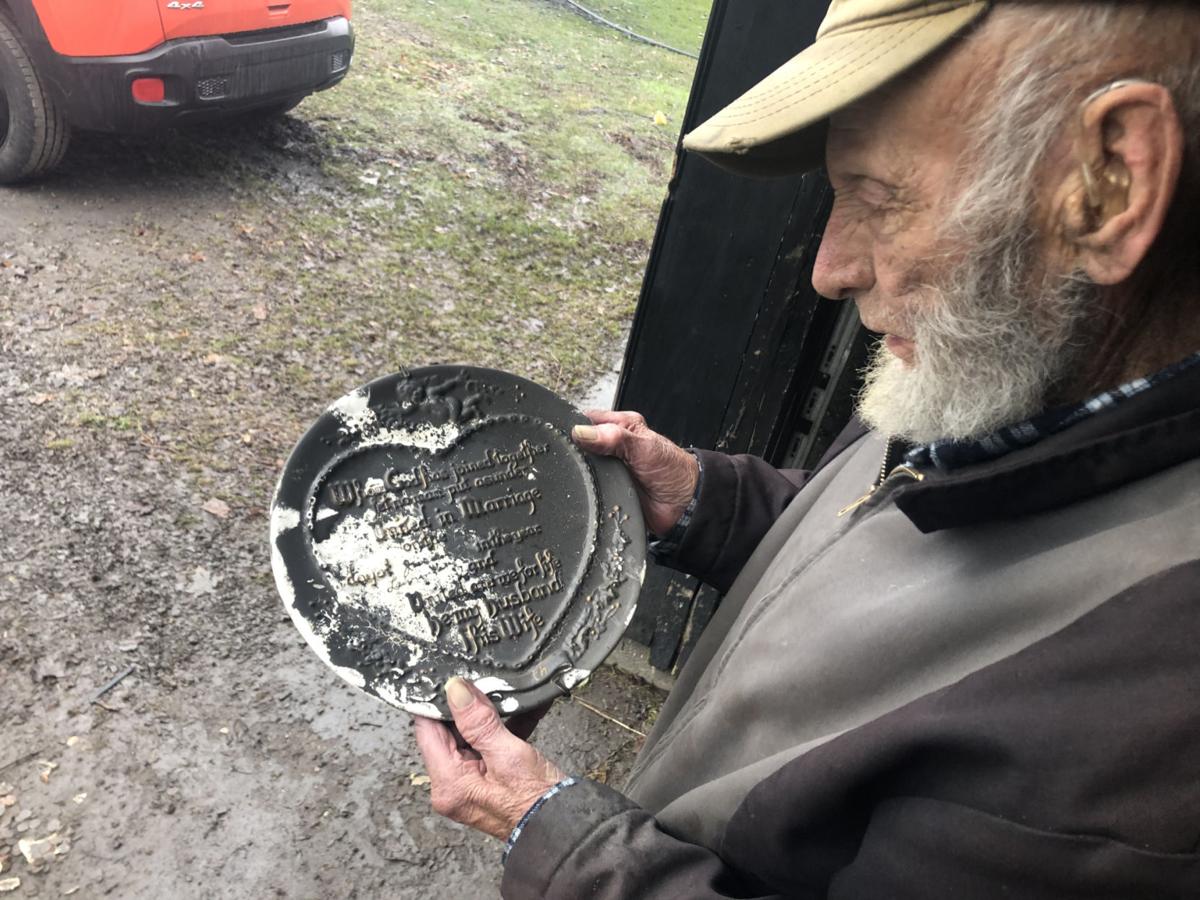 Gerald Pickert holds a plate Wednesday that was rescued from the fire that burned his house in Antwerp to the ground on Tuesday. Ben Muir/Watertown Daily Times 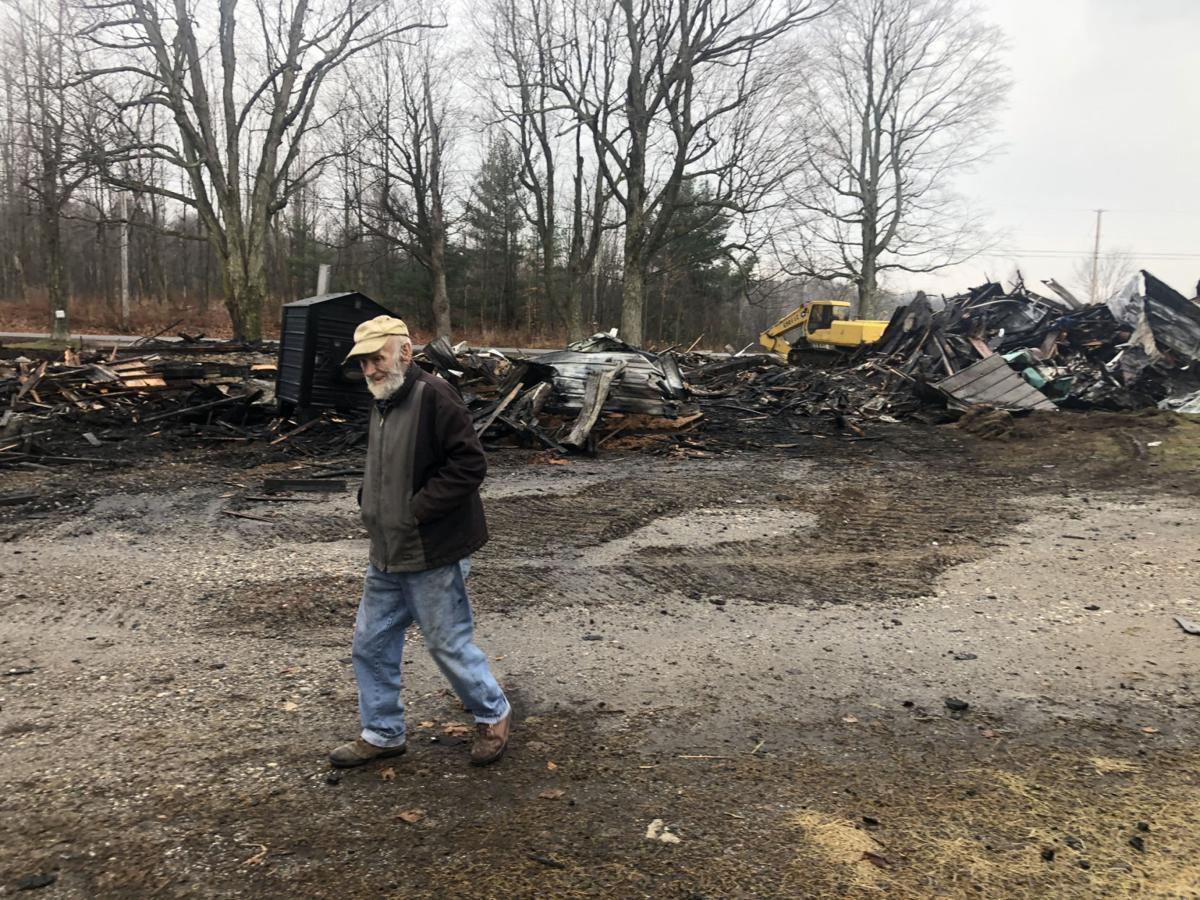 Gerald Pickert stands Wednesday near the remains of his house on County Route 194 in Antwerp. Ben Muir/Watertown Daily Times 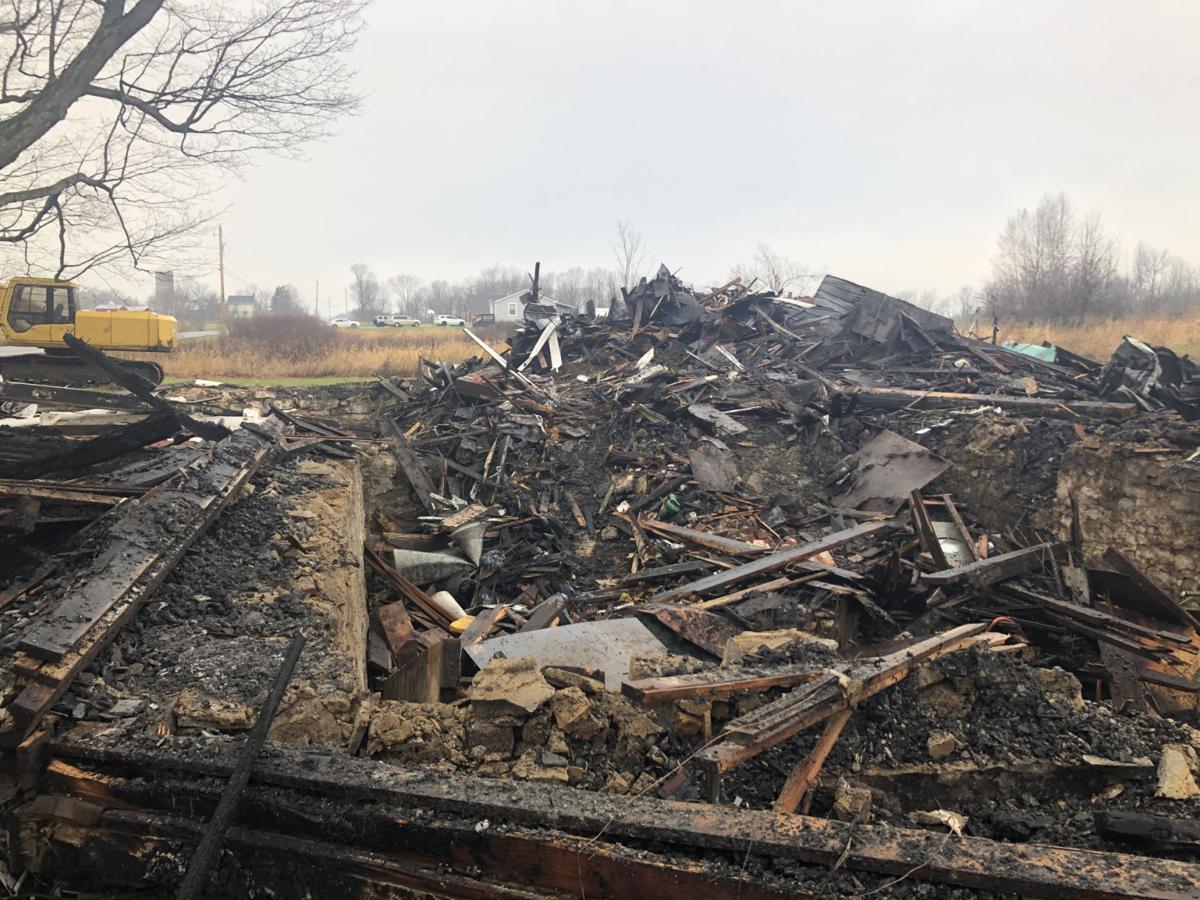 The remains of the house at 35201 County Route 194 in the town of Antwerp. Ben Muir/Watertown Daily Times 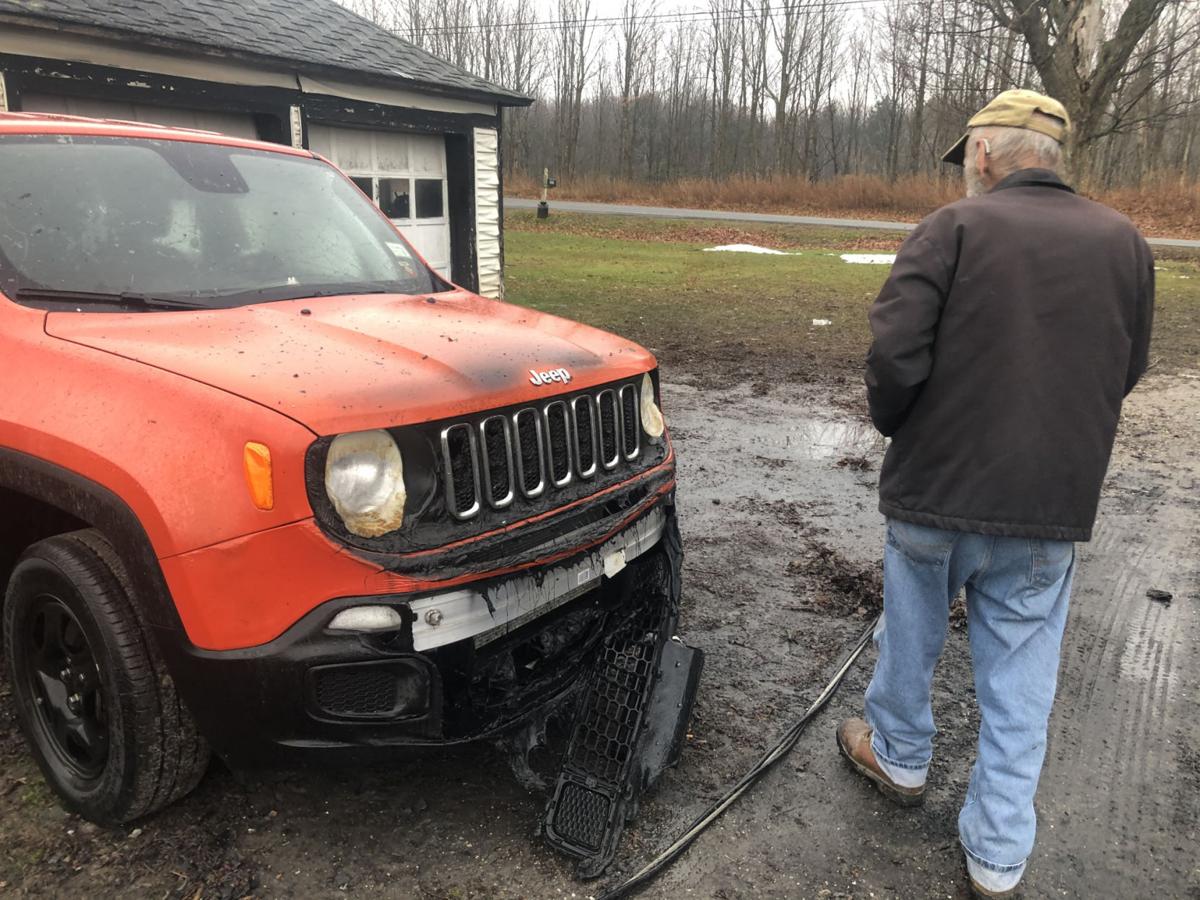 Gerald Pickert stands near the remains of his house Wednesday at 35201 County Route 194 in the town of Antwerp. Ben Muir/Watertown Daily Times

Gerald Pickert holds a plate Wednesday that was rescued from the fire that burned his house in Antwerp to the ground on Tuesday. Ben Muir/Watertown Daily Times

Gerald Pickert stands Wednesday near the remains of his house on County Route 194 in Antwerp. Ben Muir/Watertown Daily Times

The remains of the house at 35201 County Route 194 in the town of Antwerp. Ben Muir/Watertown Daily Times

ANTWERP — About 25 years ago, Gerald Pickert installed a street light in his backyard because his wife wasn’t used to falling asleep in the country. That street light is one of the last things standing after Mr. Pickert’s house burned to the ground Tuesday.

Shortly before noon that day, Mr. Pickert was taking a nap in his living room. His daughter-in-law who lives with him, Becky, was upstairs when she started to smell smoke.

Mr. Pickert woke from his nap and went to his old pool room, which is connected to the back of his house. He opened the door and smoke started billowing out. He told Becky to call the fire department. He grabbed what he could from inside the house and proceeded to get out safely alongside Becky and their black lab, Spade.

The fire would go on to spread to the entire house. At least 10 departments would be at his house on County Route 194 that day. At one point, the flames towered over the large structure, set with four bedrooms on the second floor and two on the first.

Crews, unable to enter the home, surrounded it and sprayed from the outside. Machinery was brought in to tear it down so firefighters could attack the hottest spot of the blaze. Mr. Pickert remembers them staying there long past dark.

He said he’s not surprised, though grateful for the outpouring of support from the community.

Mr. Pickert, 87, has lived in Antwerp all his life. He worked in the oil business, hauled milk for 55 years and bought an auto body garage downtown.

Now Mr. Pickert is staying with his grandson and his wife, who live next door. He said he’s doing well, approaching the loss of the house he’s lived in for 25 years with a balance between sadness and “what-can-ya-do?” No one was hurt, but there were many photos lost, which is what he’ll miss the most.

“If anybody would say that this doesn’t affect you, they’re wrong,” Mr. Pickert said. “It’s gotta affect you. Something like this doesn’t happen every day. This is the first time I’ve ever had a fire, I tell you, I was pretty sick about it. I tell ya. It’s a beautiful house.”

Humor, even when the experience was at its freshest, remained important to him. The morning after the fire, as he was walking around his property, he passed his house that was reduced to its foundation. He saw his old barn behind it, which collapsed years ago. His daughter-in-law’s Jeep parked nearby — the front melted. He kept walking, and when he noticed a pile of coins on the ground, covered in mud, he started laughing.

“The thing I’m wondering about is who was the guy who lost all the money,” Mr. Pickert said with a laugh. “Where did it come from?”

He opened his nearby garage and took a look inside, where firefighters had stored whatever they could save. There were cabinets, dressers, a shotgun. A commemorative plate rested on one of the shelves, from his parents’ 50th wedding anniversary. His granddaughter-in-law, Christine Ayen, would later wash the soot off the engraved plate.

“You got something, grandpa, huh?” she said.

When Mr. Pickert walked out of his garage, he stopped to look at the 30-foot street light in his backyard.

“You wanna hear a good one?” Mr. Pickert said.

Mr. Pickert and his wife, Helen, moved out of downtown Antwerp to this farmhouse together. His wife, however, had gotten used to sleeping with the street lights shining through her bedroom window.

“She couldn’t sleep because there was no light in the window to our bedroom,” Mr. Pickert said. “So guess where that light came from? I put that light up so she could sleep at night.”

Mr. Pickert’s wife died around 15 years ago, and he said she grew to love that old farmhouse.

“She was a real good woman,” Mr. Pickert said.

Mr. Pickert has around 150 acres of land on County Route 194 — plenty of space to build a new house, which he plans to do this spring. He wants to be near his family, and maybe someday he can pass it down to his 10 grandchildren.