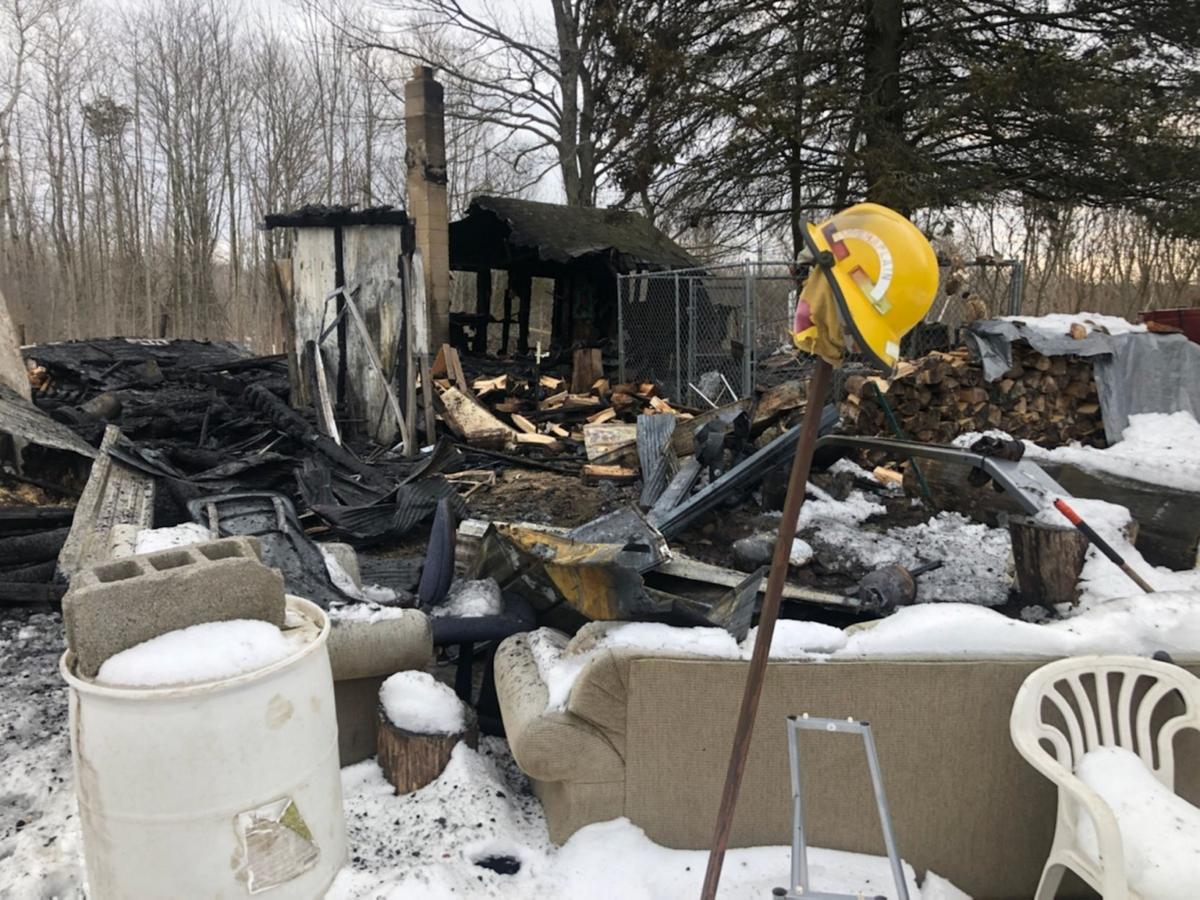 Brian Hall’s home on Woodpecker Lane in the town of Ellisburg is a total loss after it caught on fire Tuesday. Ben Muir/Watertown Daily Times 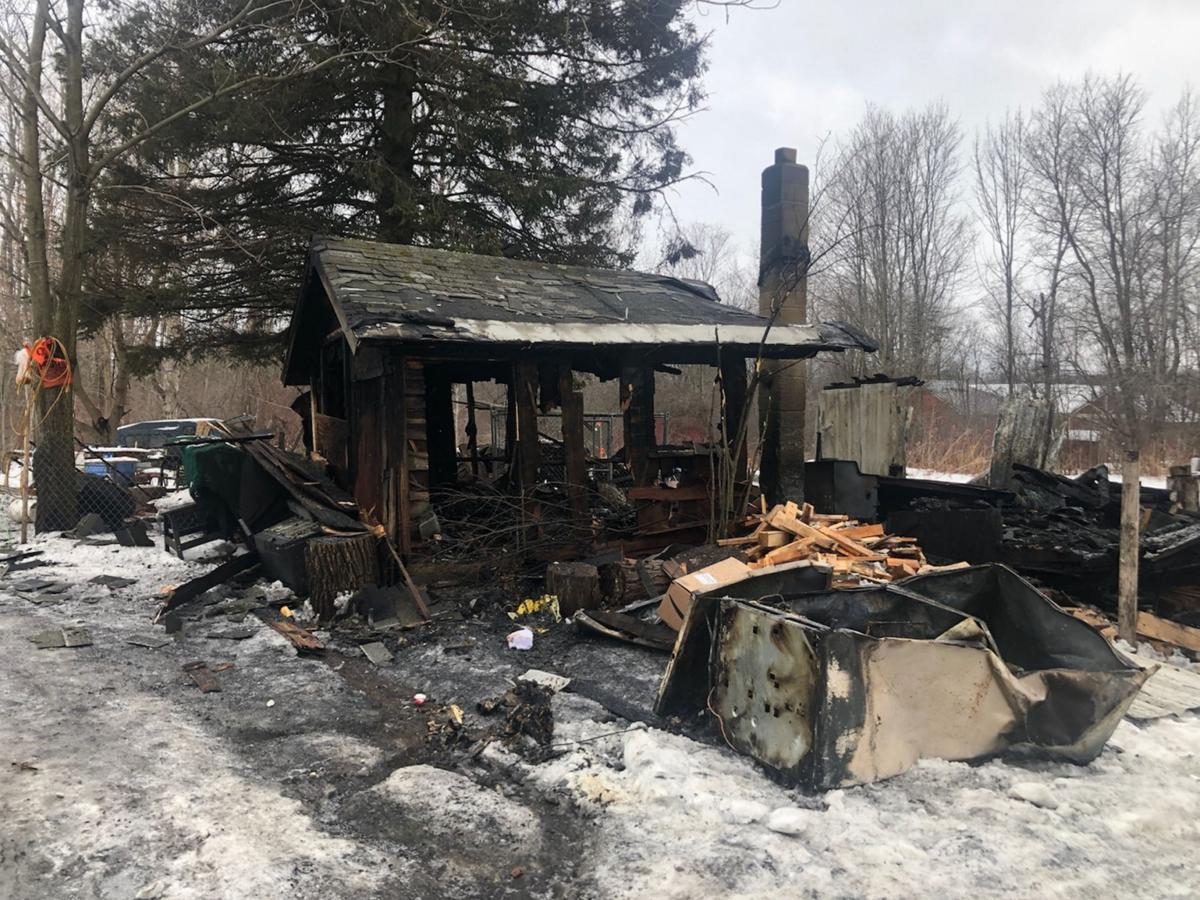 Brian Hall’s home on Woodpecker Lane in the town of Ellisburg is a total loss after a fire Tuesday. Ben Muir/Watertown Daily Times

Brian Hall’s home on Woodpecker Lane in the town of Ellisburg is a total loss after it caught on fire Tuesday. Ben Muir/Watertown Daily Times

Brian Hall’s home on Woodpecker Lane in the town of Ellisburg is a total loss after a fire Tuesday. Ben Muir/Watertown Daily Times

ELLISBURG — After his house burned down this week, a metal rod with a firefighter helmet hanging off it was one of the last things standing on Brian Hall’s property.

Mr. Hall was driving to Oswego on Tuesday afternoon when he got a call from his neighbor. It was around 4 p.m. when she told him his house on Woodpecker Lane was on fire. The neighbor said everything was burning to the ground, and Mr. Hall was wondering if his dogs and cat were alive.

There’s a cage connected to the back of Mr. Hall’s house, which allows his dogs, Shovel and Digs, inside and outside without getting loose. So at the time it seemed like the only way the dogs would be alive is if the neighbor saw them in the cage, and they weren’t there.

Firefighters were dispatched shortly after 4 p.m., and they didn’t find the dogs either. As Mr. Hall drove back to his house, he assumed his dogs hadn’t made it out.

When Mr. Hall got back home, he went to the barn behind his house to see if the dogs had somehow made it back there. He opened the door and there they were.

The cage has another door that leads to the yard. Mr. Hall puts wood in front of it so the dogs can’t get out. However, it appears Shovel and Digs, brother and sister American Pit Terriers, shoved the wood out of the way and escaped the cage. They then went through the woods and to the barn, where the door was locked partially. The dogs squeezed through the door and stayed in the barn until Mr. Hall got there, he said.

They escaped without burns, Mr. Hall said, but it appears Shovel scraped his leg while getting into the barn. Shovel was taken to the vet and was likely to return home on Wednesday, Mr. Hall said.

Mr. Hall also has a rooster named Marshall that survived. His cat, Sneaks, has not turned up.

“I would think he would be the first one out,” Mr. Hall said. “But I don’t see him anywhere. I stayed in the barn last night and I didn’t see (Sneaks). But he could be anywhere.”

The morning after the fire, standing tall in the wreckage was a rod with a firefighter helmet hanging from it. The helmet was brought to Mr. Hall’s house by a friend, who died last year.

To honor his friend, Mr. Hall decided to hang the helmet on the rod, which is stuck in the ground next to the bonfire pit they all used to spend time around. And it made it through the fire.

The cause of the fire is still under investigation, though Mr. Hall was told the wood-burning stove is suspected to have ignited the home.

The house is a total loss, but Mr. Hall said he’s likely not going to reach out to resources like the Red Cross. His barn has a stove to keep he and the dogs warm, and he has plenty of neighbors to help him out.

“I’m just going to try to whittle at the mess here,” he said. “The firefighters did all they could do.”

Steven Blount, one of Mr. Hall’s neighbors, was at his house the morning after the fire as well. Mr. Blount said he’s going to huddle some of the neighbors for Mr. Hall.