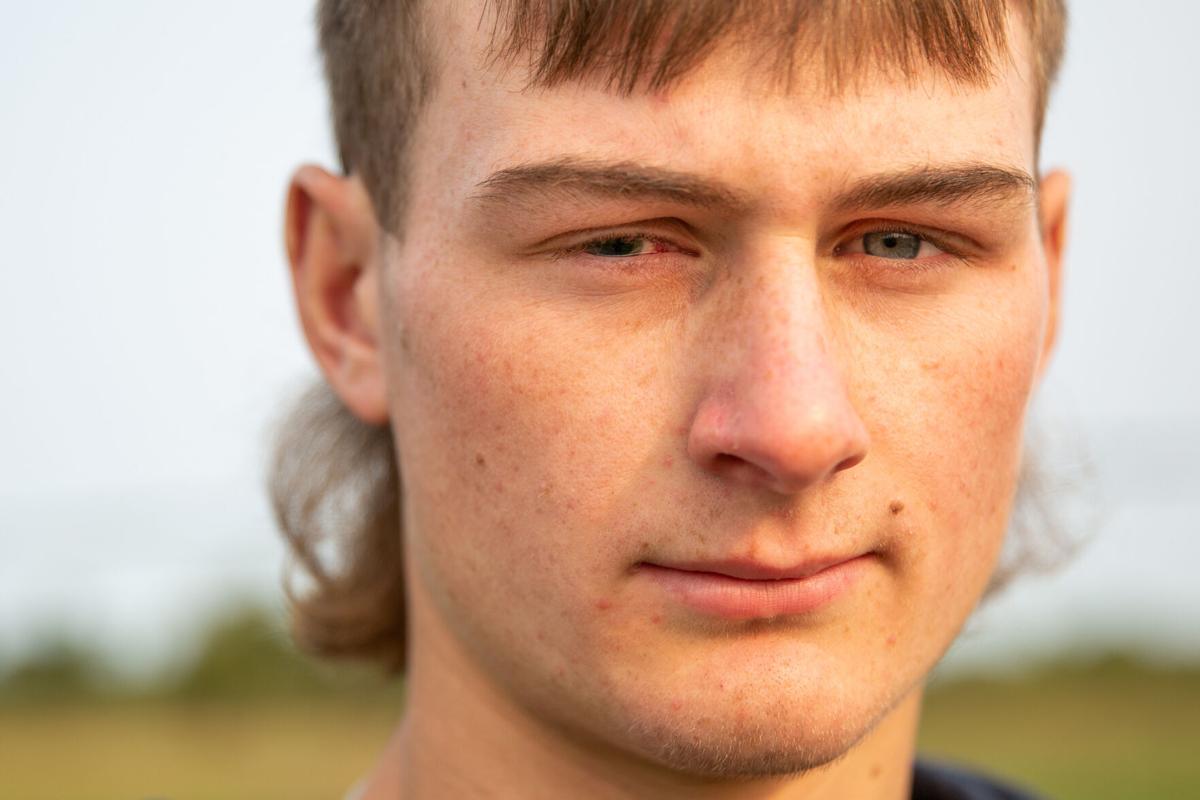 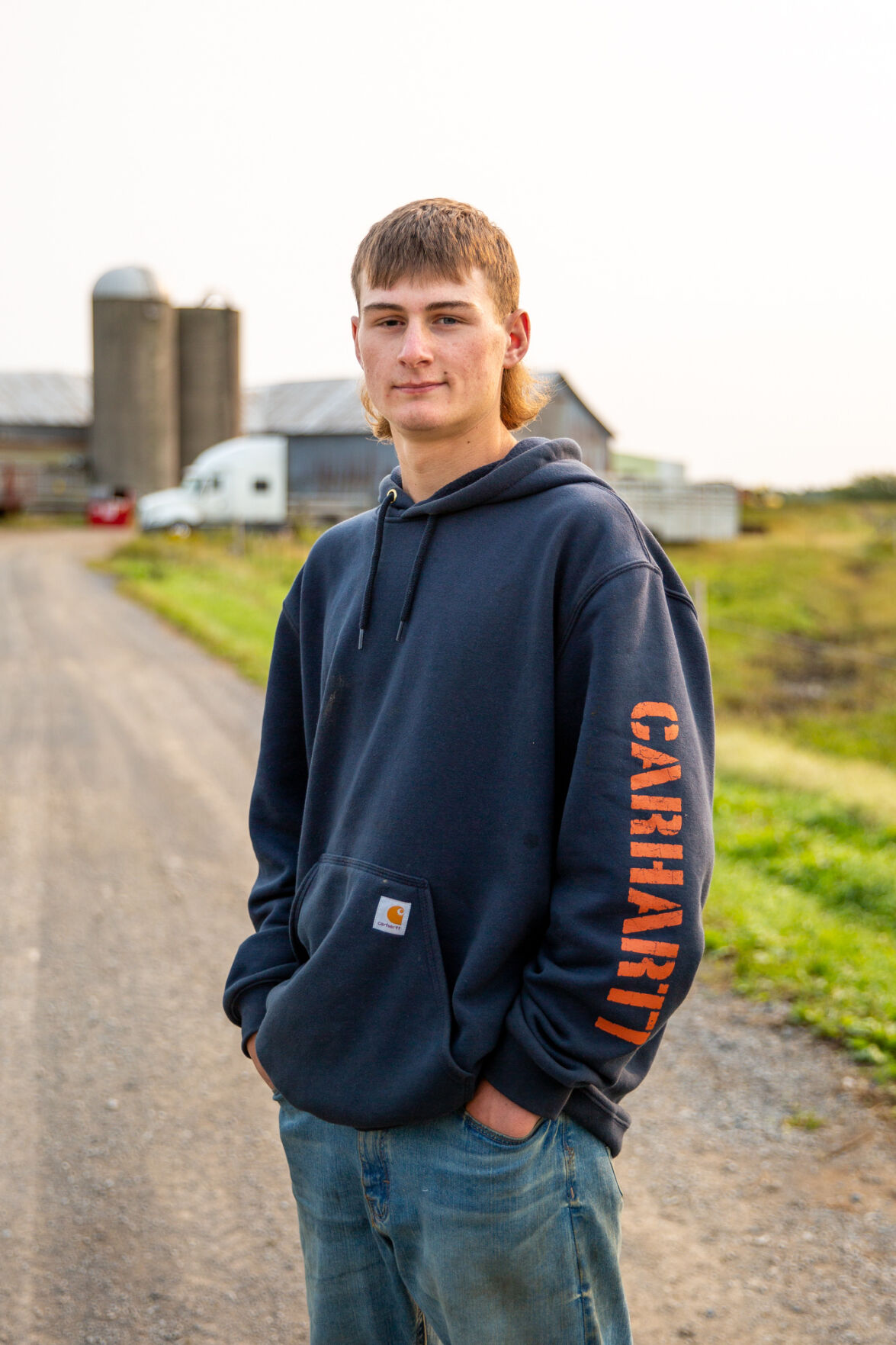 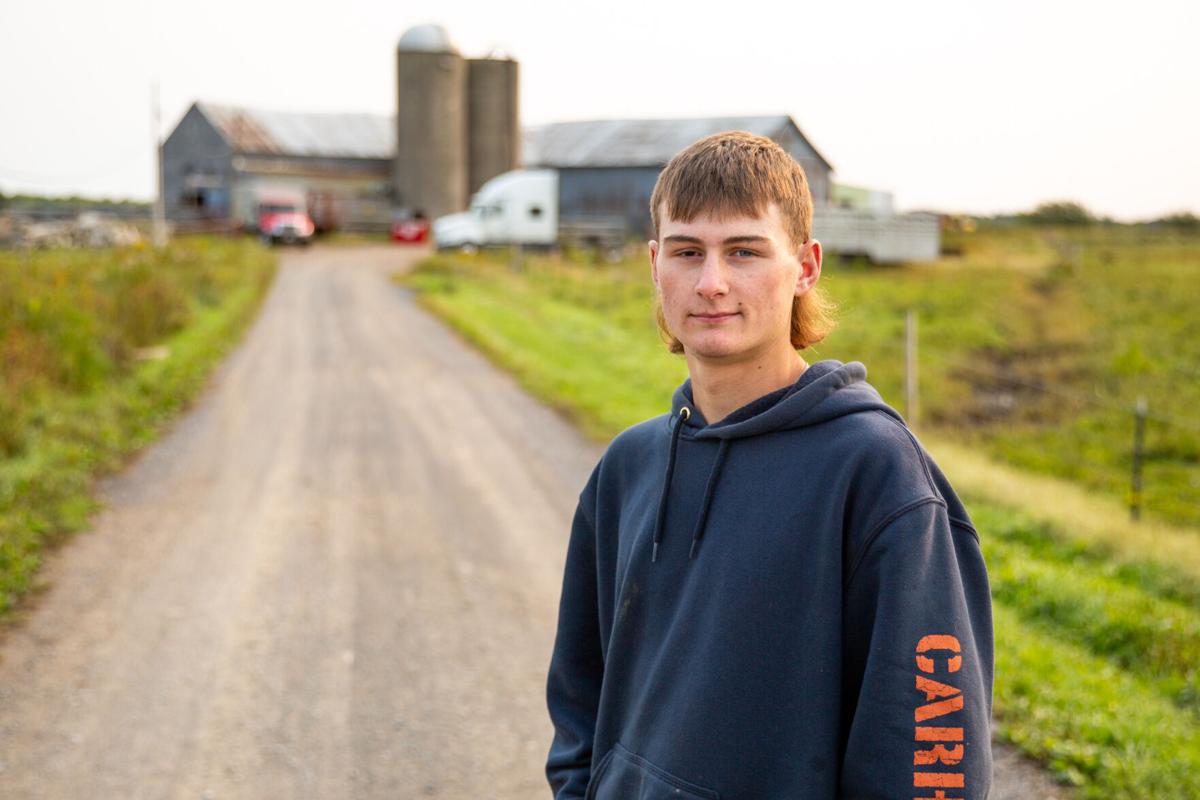 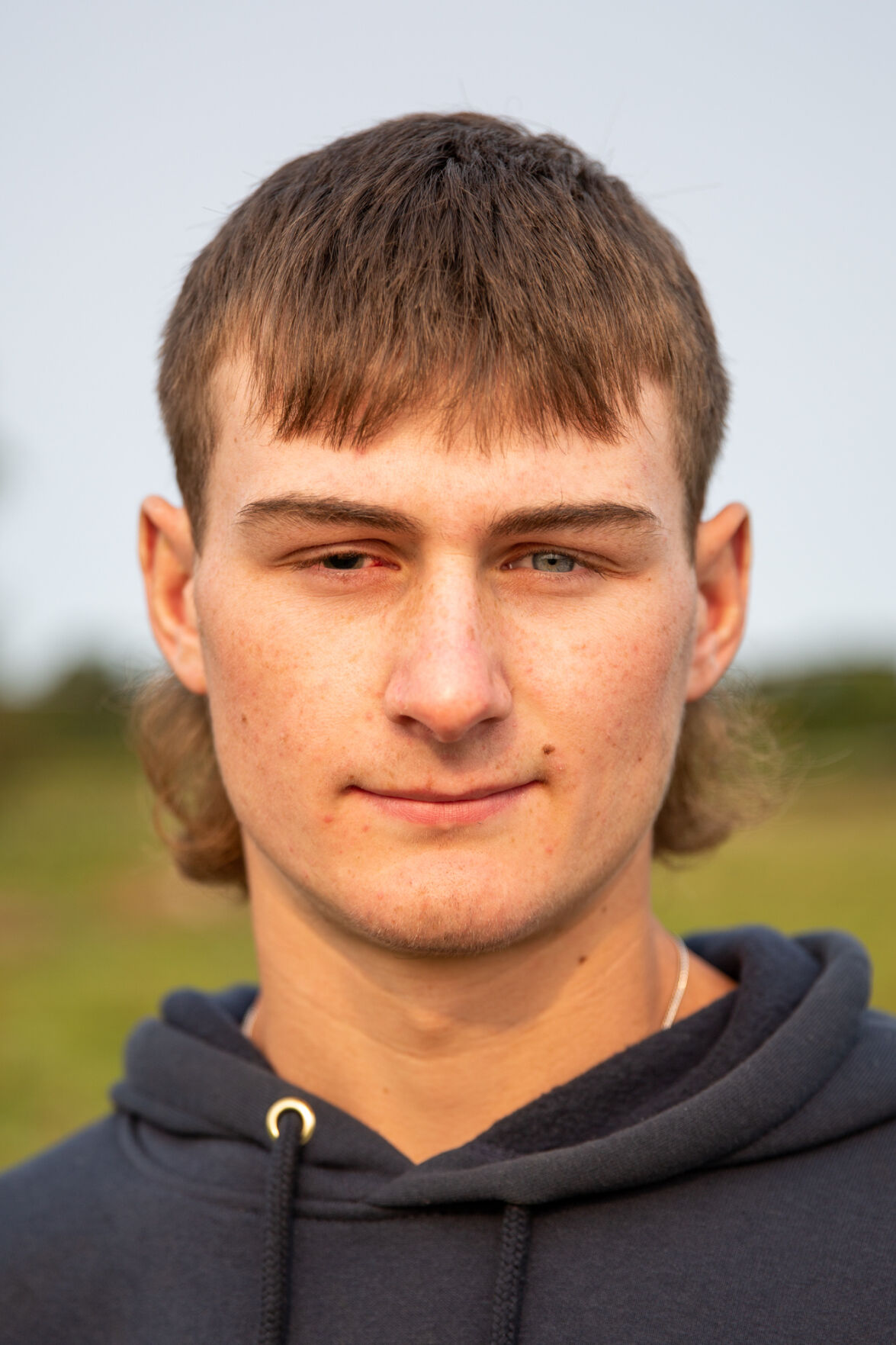 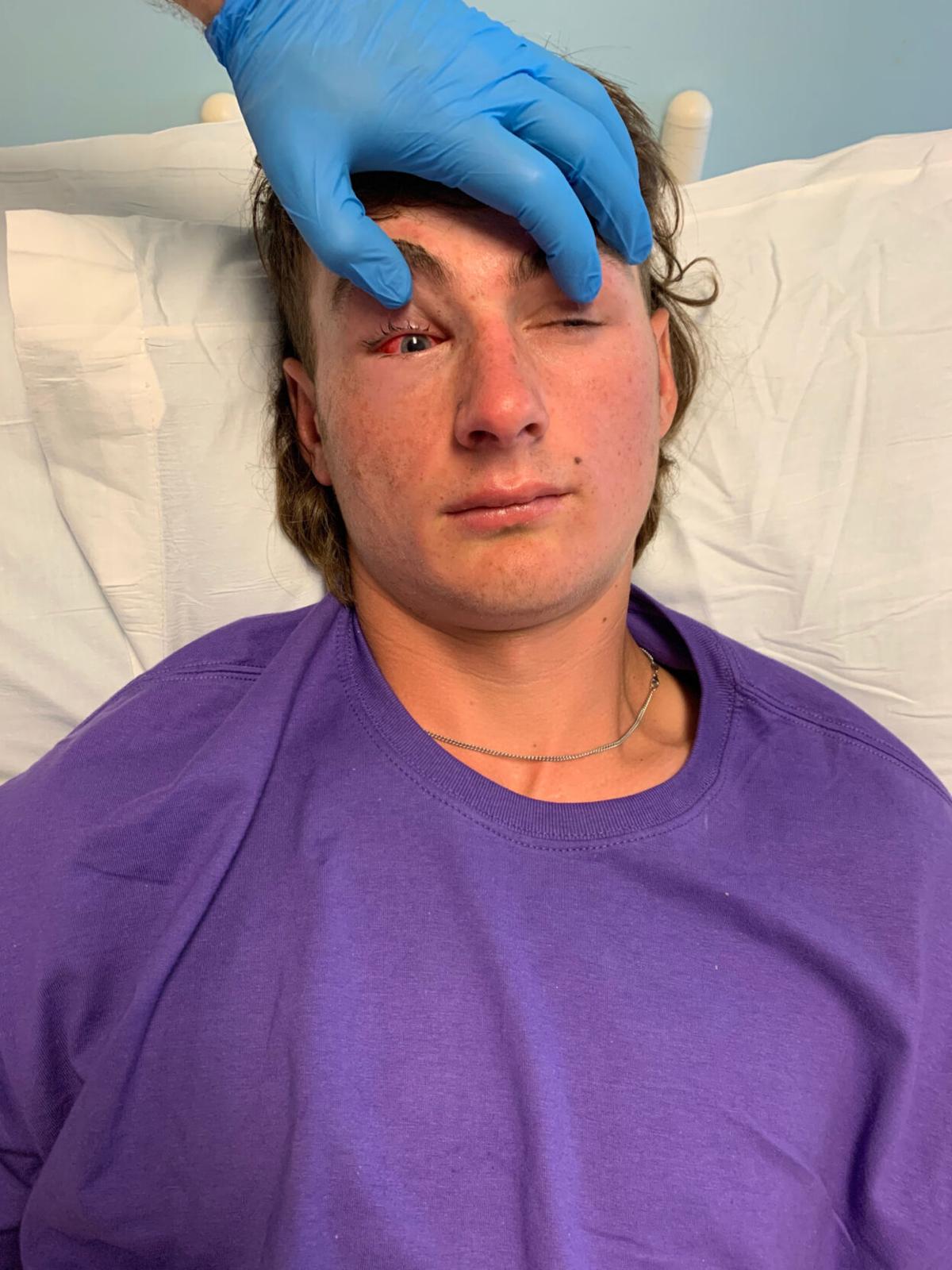 Jordan Wendt, 17, is now blind in one eye after being shot in the eye with a copper BB on Aug. 27. Provided photo 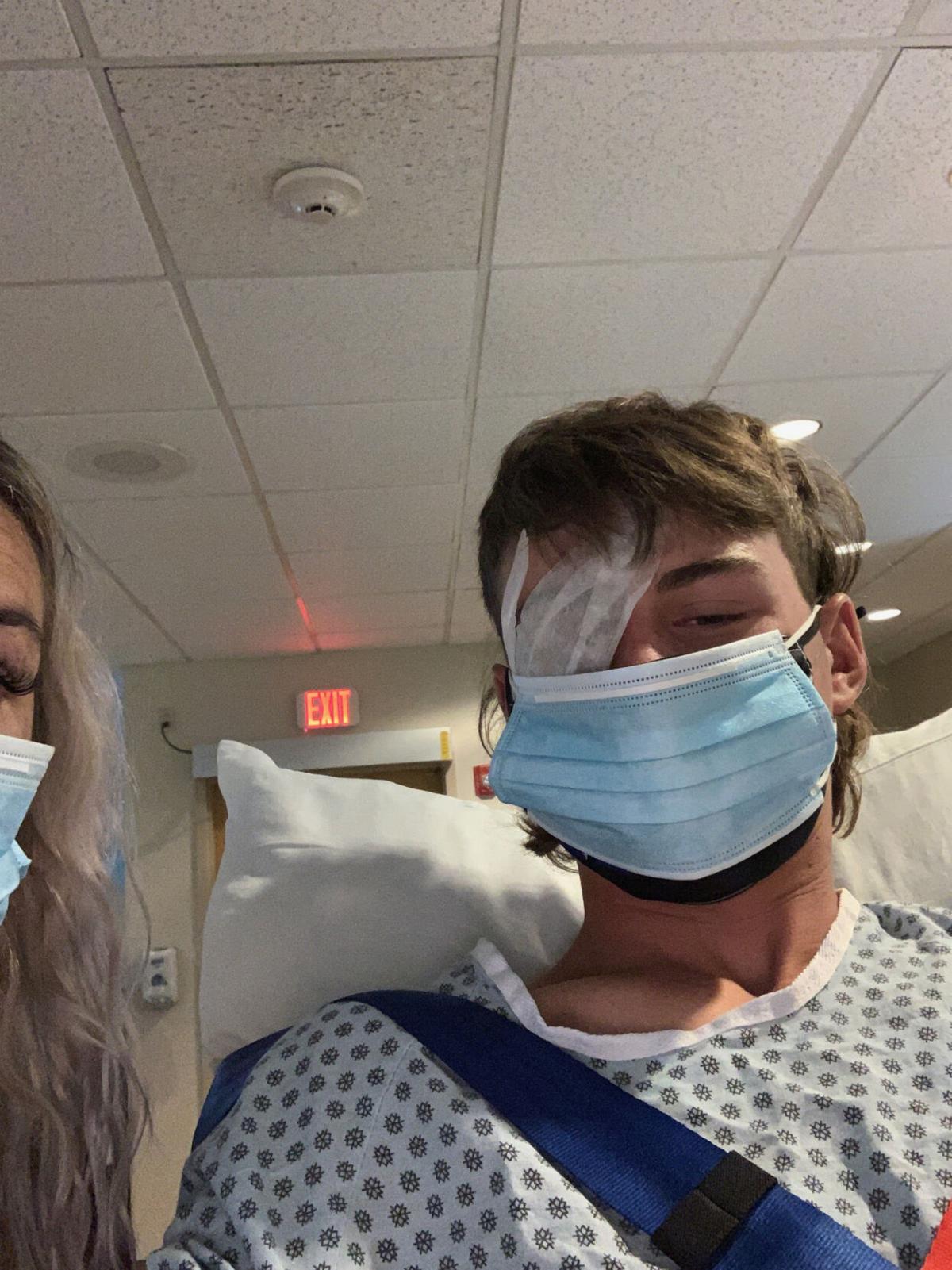 Jordan Wendt, 17, had a BB lodged in the muscle of his eye after an Aug. 27 incident. Provided photo

EVANS MILLS — As he poked his head out from behind a bale of hay a few weeks ago, what felt like a needle flew into Jordan Wendt’s eye.

The incident set in motion a series of events that would make him well-known among medical professionals as the now blind-in-one-eye patient who got shot through the eye with a copper BB.

His mother, Virginia “Ginni” Wendt, is working through what she says are two responses resulting from her son being shot in the eye while playing with friends.

“Either people are like, ‘We all have done it and understand accidents happen,’” she said, “or they’re like, ‘Oh my gosh, you’re a horrible parent.’”

Jordan, 17, got off work early on Aug. 27. He was with his brother and a friend at his family’s farm in Evans Mills, where he’s worked since school shut down in March. They were looking for some entertainment, so they got out their CO2 pistols and began shooting at each other.

“It was a ‘hide behind whatever you can find and hope you don’t get hit’ kind of deal,” Jordan said.

He said he managed to strike his brother, Justin, and friend, Connor.

Jordan said he found cover behind a hay bale near their green barn. Naturally, he peeked his head out from behind the bale to see where the others were. Right then, one of the copper BBs came whistling in from nearly 30 yards away and struck him directly in the eye.

“There was no vision at all immediately,” he said. “They thought I was messing around when I said it.”

It still isn’t clear to them who fired the shot, but in the scheme of things it didn’t matter too much. The BB separated Jordan’s eye muscle in the front, entered his eyeball and went out the back, coming to rest between the back and the muscle behind his eye. Jordan, of course, wouldn’t find that out until later.

He drove the short distance from the barn to his house to tell his mom what happened. He said his mom went into fight-or-flight mode and chose to be calm. His eye was weeping a clear liquid, which would have a red tinge to it as the inflammation progressed. They kept rinsing his eye and he continued to say he couldn’t see, so the decision was made to go to the emergency room.

Jordan’s pain tolerance is noteworthy. He broke his arm in three places playing football some years ago and didn’t shed a tear, his mom said. So when Ginni and her son were on the way to the Carthage Area Hospital emergency room, she asked what his pain level was on a scale of 1 to 10, and he said 8.

It took fewer than 20 minutes for medical staff to arrange a ride for Jordan from Carthage to Syracuse.

“In the scheme of emergencies, it was very quick,” Ginni said. “When it’s life, limb or eyesight, it’s amazing how fast things move.”

He was set to be taken by ambulance to Upstate Golisano Children’s Center, Syracuse.

“I wasn’t frantic,” Ginni said. “I didn’t want to push my emotions out and have him reflect those.”

The results of a CT scan he underwent when he got to Syracuse showed the BB still lodged in the muscle behind his eye.

It was nearing 11 p.m. at this point, and the director of ophthalmology at Upstate came in to look at the scans and develop a game plan. Ginni said the director reached out to other ophthalmologists for their opinion and decided an optical plastic surgeon should scrub-in for the surgery. Because the BB was copper, which isn’t good for the eye, the doctors wanted to get it out as soon as they could. But not all the doctors could make it in that late, and eyes are undeniably complicated. Ginni learned there are different doctors who work on the front of the eye and the back of the eye, so the decision was made to postpone surgery until the next day.

The procedure took just over two hours, Ginni said. She said the surgeons took the eye muscle out, repaired the hole, removed the BB and put everything back together.

Jordan was home from the hospital a few days later. His eye still functions. He just can’t see out of it. His mom is being realistic when it comes to him ever seeing out of it again. Doctors are telling her that the more time he goes without light perception, the less confident they are the sight will come back.

“Everyone is trying to tell me to have hope,” she said, “and of course I have hope.”

For Jordan, he’s OK with it if he can still work and be active in the Pamelia Volunteer Fire Department.

“It’s not going to slow me down,” he said. “It’s going to be about returning to life as normal, just without half my vision.”

“He felt guilty about it, but stuff happens,” he said. “There’s nothing you can do now. We’re just going to move on.”

As for Ginni, the question of parenting styles inevitably came up. Over the last few weeks, she decided to update her friends and family with a series of posts on Facebook.

“As much as it sucks,” she said, “social media was the easiest way to be able to make sure everybody was informed on what was going on.”

She knew making the situation public would draw some negativity.

“Me, putting it out there, I made myself as a parent very vulnerable,” she said. “You have to choose your words carefully.”

She said she was never pushed into guilt, but she did think about it. Should she have been more vigilant with eye protection?

“Should I have been more of what they quote unquote call a ‘helicopter parent?,’” she said. “But it’s not guilt that I didn’t do anything right. Jordan is 6-foot-5 and 17. I have to pick my battles.”

Part of her point is that there’s accountability for everyone. She didn’t tell them they couldn’t play with the BB guns. Her son could have chosen to wear eye protection, and her other son could have shot and missed his brother’s face.

“There’s a level of accountability with everyone,” she said. “I think that’s what people need to realize in life.”

Jordan wants his eye to be an example for anyone who plans to use BB guns.

“It’s perfectly fine to go out and shoot BB guns at each other, just make sure you have safety glasses on,” he said, “and some other protective clothing at least.”

Above all, for the Wendt family, accidents happen.

Should the ownership of BB guns be more closely regulated by the government?

Adults need to teach children early on that guns are not toys and can do a lot of harm.

Had my first BB gun when I was much younger than Jordan...spent hours shooting, along with my friends...sometimes taking chances that were foolish... Alone, I was very responsible; my father was a safety instructor..however, when with other kids my age ...not so much.. It wasn't' a matter of education - I sat many times when my father gave hunter safety courses.... it was immaturity...

Thank you for being willing to share this experience in hopes of helping to keep it from happening to someone else.