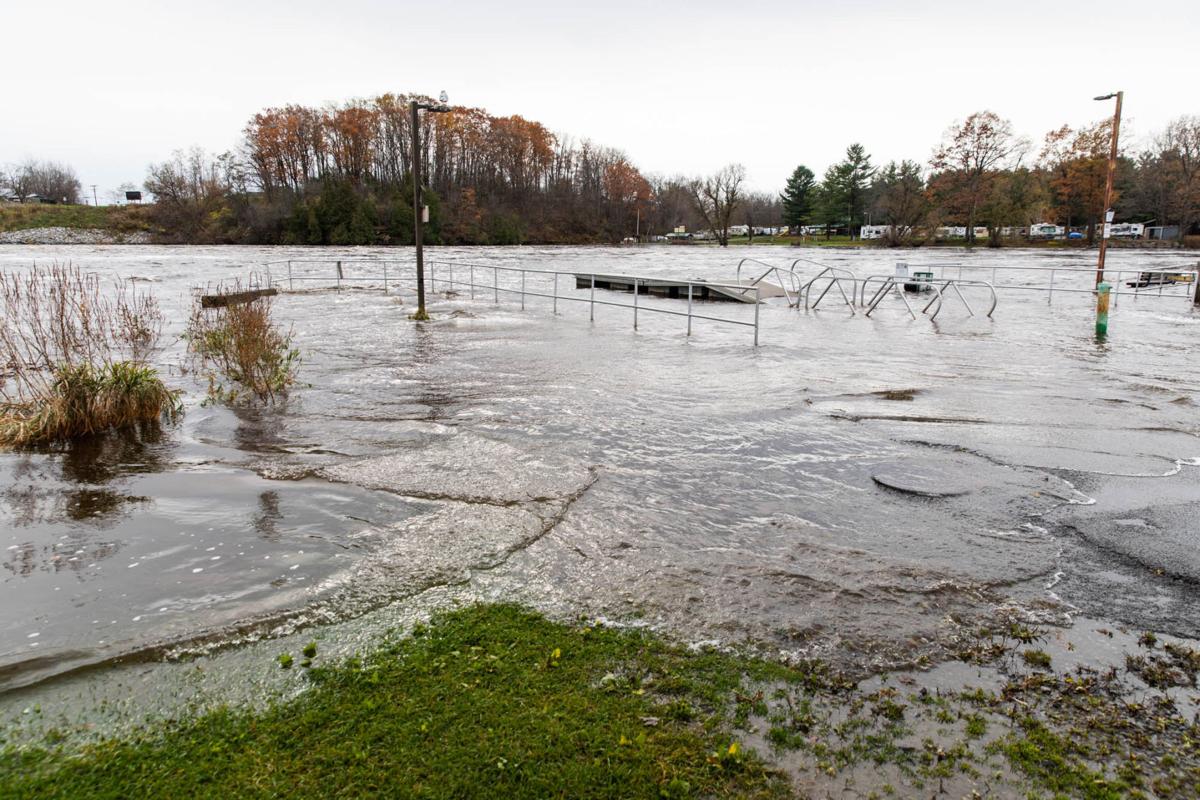 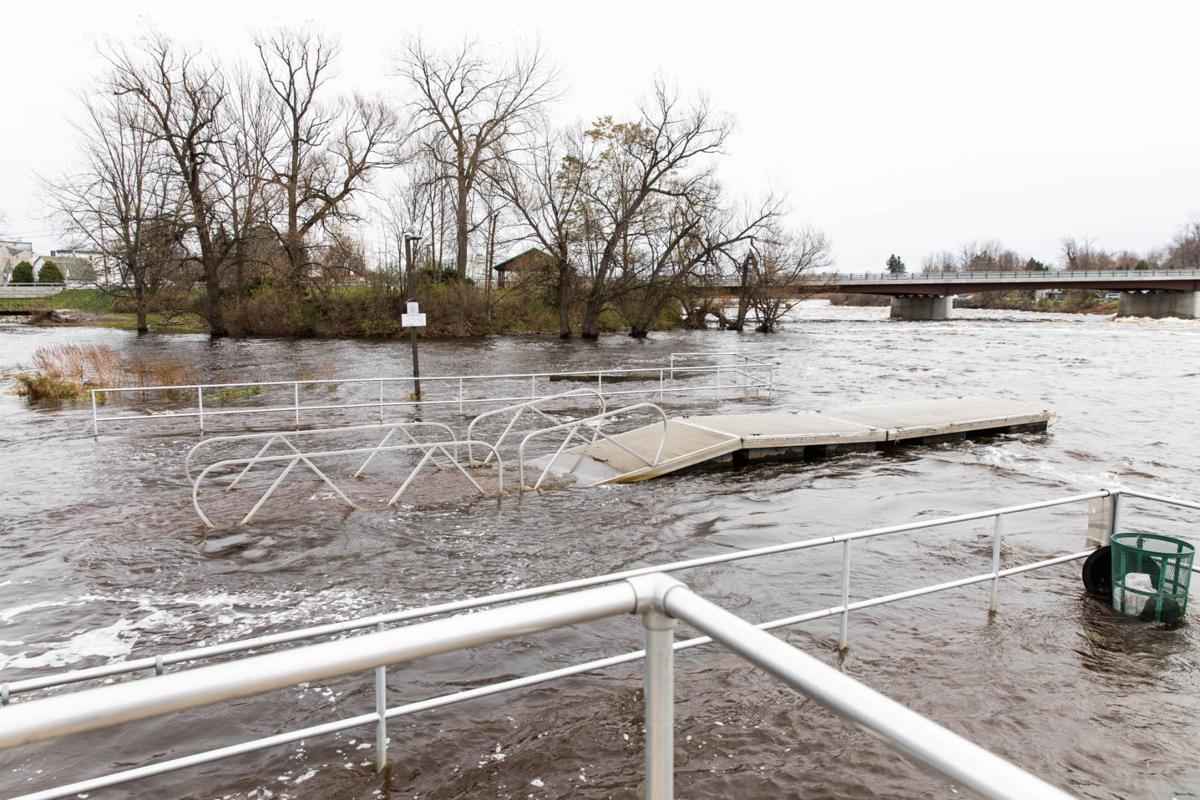 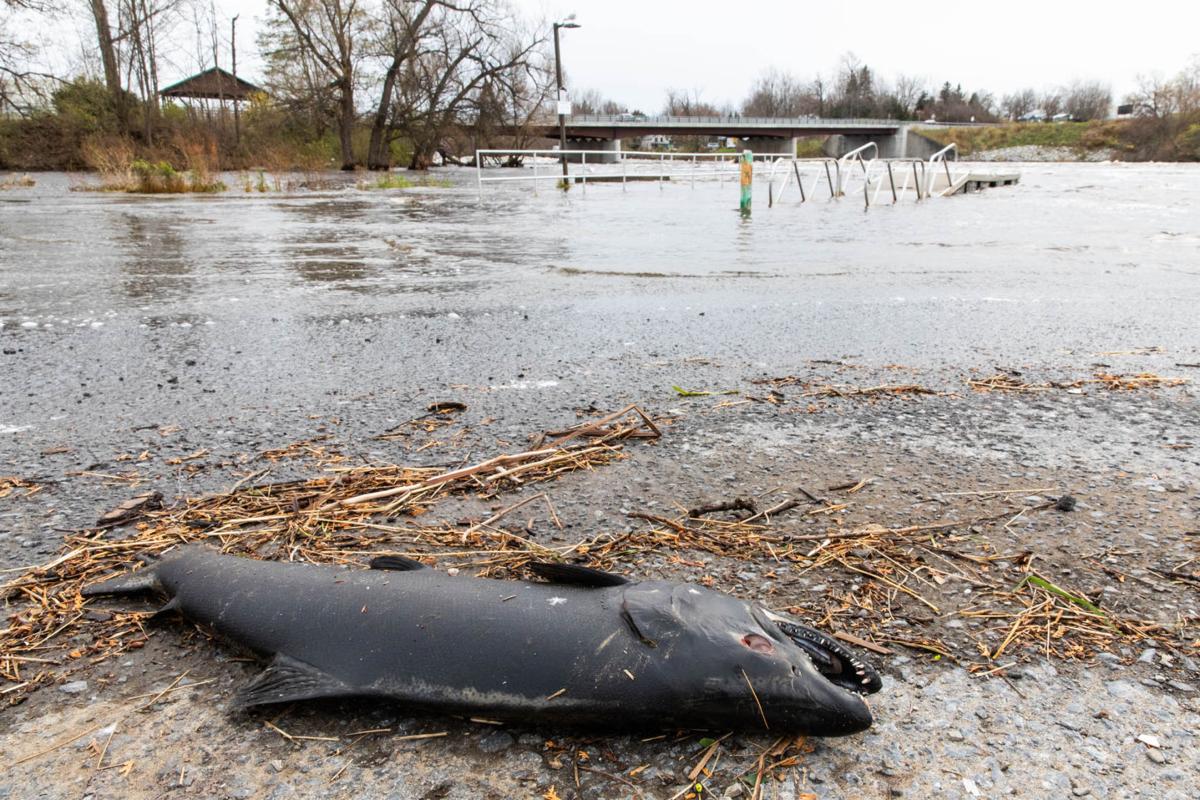 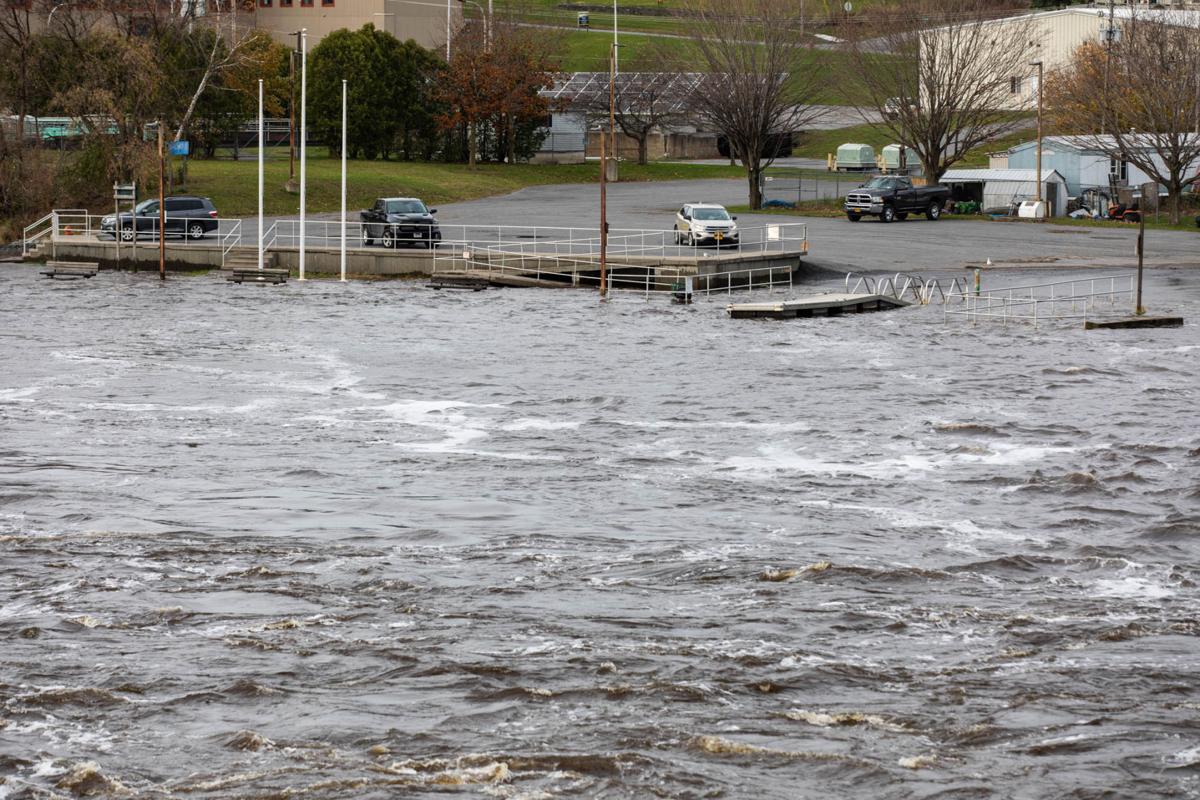 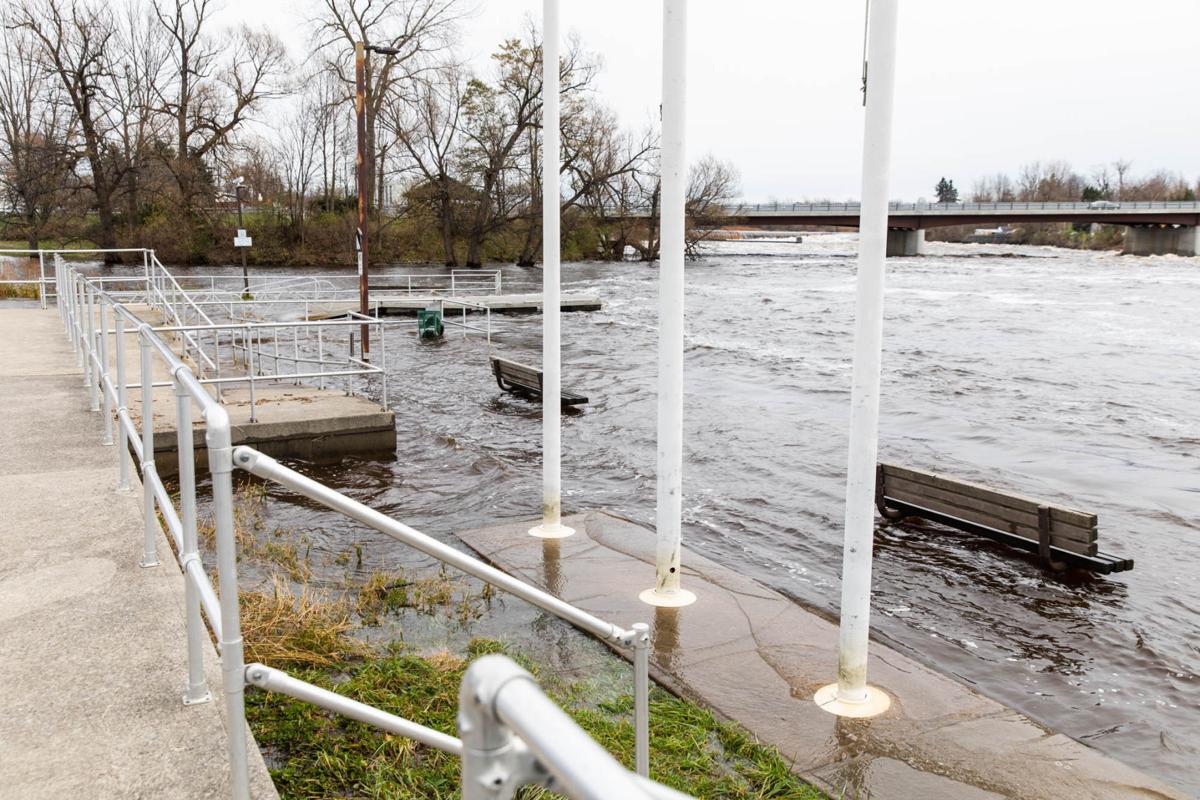 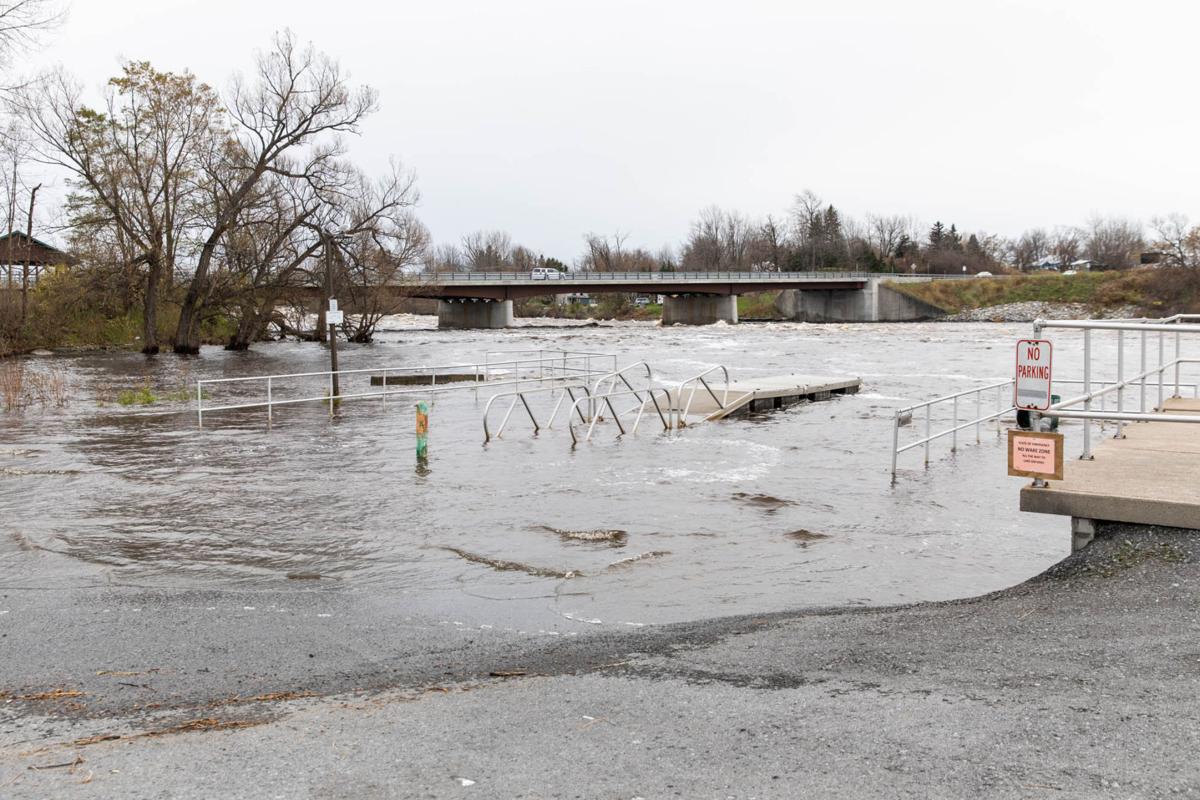 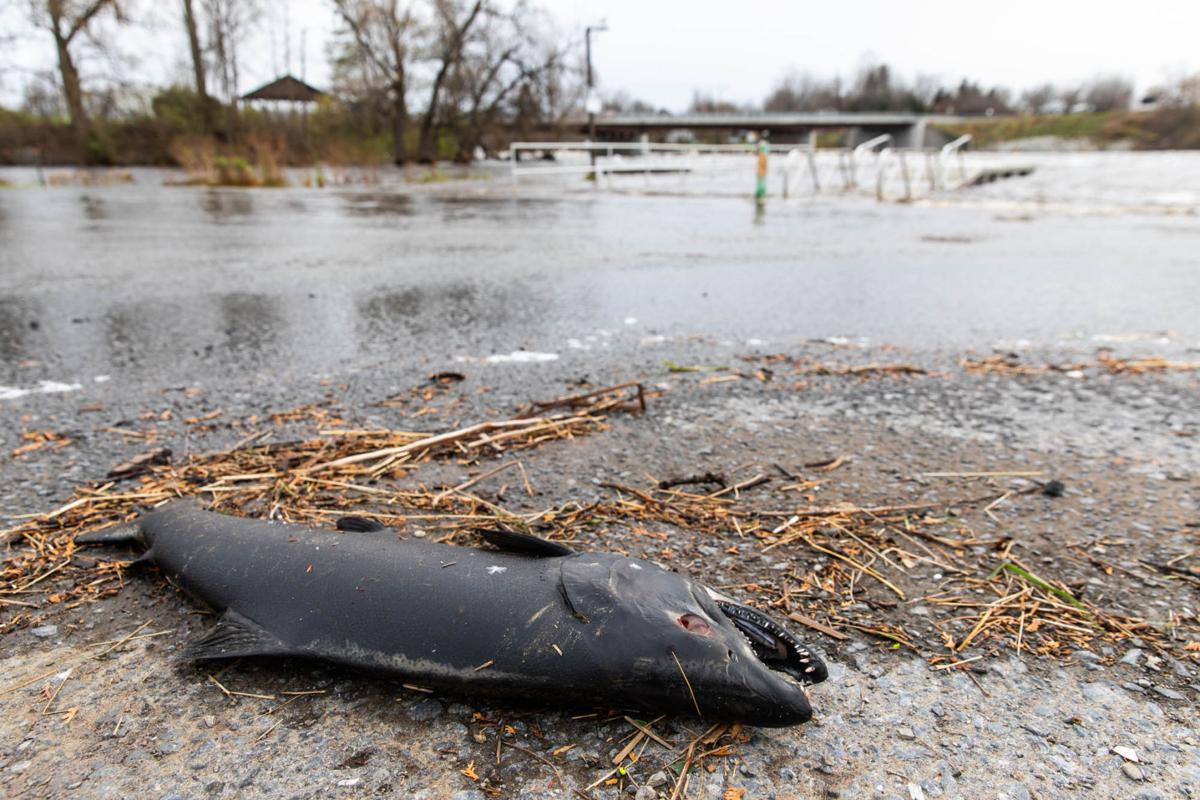 Howling gales, that at times exceeded 60 mph Friday, uprooted trees that landed on homes, power lines, roads and cars, tore off tree limbs and branches, and bent and pushed over signs along the roads.

LOWVILLE — In the midst of storm fallout, a number of Lewis County roads along the swollen B…

They also fueled giant waves that destroyed and damaged boathouses, flooded homes, and tore away docks and boats in waterfront communities. A portion of the Clayton Riverwalk also collapsed in the midst of the storm.

While the wind died down and the waves along Lake Ontario and the St. Lawrence River subsided since Friday, damage wrought by the Black River persisted into the weekend.

Tributaries in Lewis County helped funnel nearly four inches of rain into the river. Farmers fields continue to be flooded and other riverfront properties that often see flooding during the spring thaw were caught by surprise.

According to the U.S. Geological Survey, the height of the Black River climbed from about six-and-a-half feet Friday to more than 11 feet Sunday, exceeding the National Weather Service’s flood stage. Water levels have since dropped to a little more than 10 feet as of Monday, but remained just above the flood stage. Outflows from the river were about six times above normal as of Monday. In Watertown the rapids were raging as murky water rushed toward Lake Ontario, but that didn’t stop kayakers from suiting up and hitting the waves Sunday. Several were spotted from the Court Street bridge.

Now that the winds have subsided, Jefferson County Highway Department Superintendent James L. Lawrence Jr. said county highway workers must clean up debris and repair and assess storm damage. Gusts that exceeded 60 mph blew over and twisted about 200 signs that must be replaced or otherwise addressed. Trees, limbs and branches must be removed from roadways. Workers also have begun unclogging culverts that flooded on county roads along Lake Ontario, including roads on Point Salubrious, Chaumont, and Pillar Point, Brownville.

“We’ll be working with the state on looking at the amount of damage to public infrastructure,” said Joseph D. Plummer, director of Jefferson County emergency management.

Highway department workers in the town of Cape Vincent spent hours clearing roads of downed trees and debris Monday, said Superintendent William Pond. They will continue their efforts Tuesday, as well as clean up debris in ditches that poured in from the waves.

The waves battered Beech Road along Wilson Bay and Dablon Point in Cape Vincent on Friday as they have in the spring and summer due to high Lake Ontario water levels, Mr. Pond said.

The river submerged the docks in the village of Dexter and flowed across the sidewalk and into the parking lot this weekend, said town of Brownville Fire Chief Ryan McIntosh. It also flooded the nearby B & J Bait Shop, said Mathew Shawcross, superintendent for the village of Dexter’s Department of Public Works.

“There wasn’t much here we can do when the water comes up,” Mr. Shawcross said. “We can see if it goes down and then take the dock out.”

Roads along the Black River in the Carthage area including State Routes 3 and 126 are again open after weekend closures in some locations.

Fields, pastures, yards and parking lots near to the river, however, are still full with what are beyond even spring post-snow melt water levels.

South Main Street in West Carthage, under a foot of water of the weekend, is passable for local traffic, however, after it turns into Zecker Road in Lewis County, parts of the road and some homes are still experiencing flooding.

The Jefferson County highway department must evaluate extensive damage to waterfront roads wrought by the waves that require long-term fixes, including shoulder damage and shoreline erosion.

Mr. Lawrence said the most extensive damage from the storm occurred along Point Peninsula, Lyme, Point Salubrious, Pillar Point and Tibbets Point, Cape Vincent, among other county roads along the water. Damage has built up along the points from widespread flooding this year and in 2017.

The storm follows the Thursday announcement that Jefferson County will receive millions of dollars to repair and enhance roads on Tibbets Point, Point Salubrius and Point Peninsula as part of the $60 million to north country communities from the Lake Ontario Resiliency and Economic Development Initiative. Mr. Lawrence said he hopes the funds could be used to help repair damage from the gales and waves Friday along with the damage from the summer and 2017.

“So we’re in the process of addressing that,” Mr. Lawrence said.

As of Monday afternoon, power returned to all National Grid customers in the north country who lost it Friday and Saturday, save about 200 on Grindstone and nearby islands in the St. Lawrence River, according to the utility’s outage map.

Almost 3,000 National Grid workers scrambled to restore power to more than 300,000 customers across upstate New York who lost power this weekend, including more than 10,000 in the north country. By Sunday, they restored power to about 98 percent of affected customers after repairing damaged equipment and removing trees, downed wires and other debris.

“We deeply appreciate our customers’ patience and understanding as we continue to restore service as quickly and safely as possible in very challenging conditions,” said Melanie Littlejohn, National Grid’s New York vice president, in a statement.