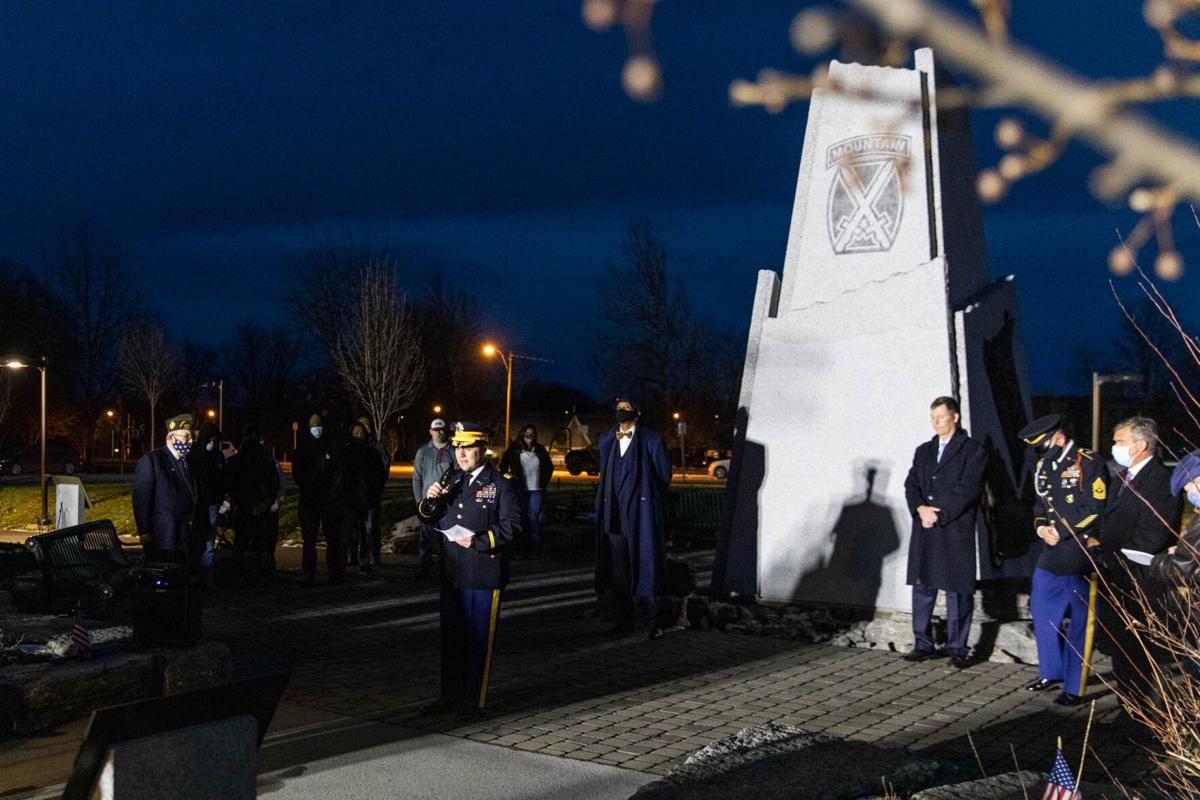 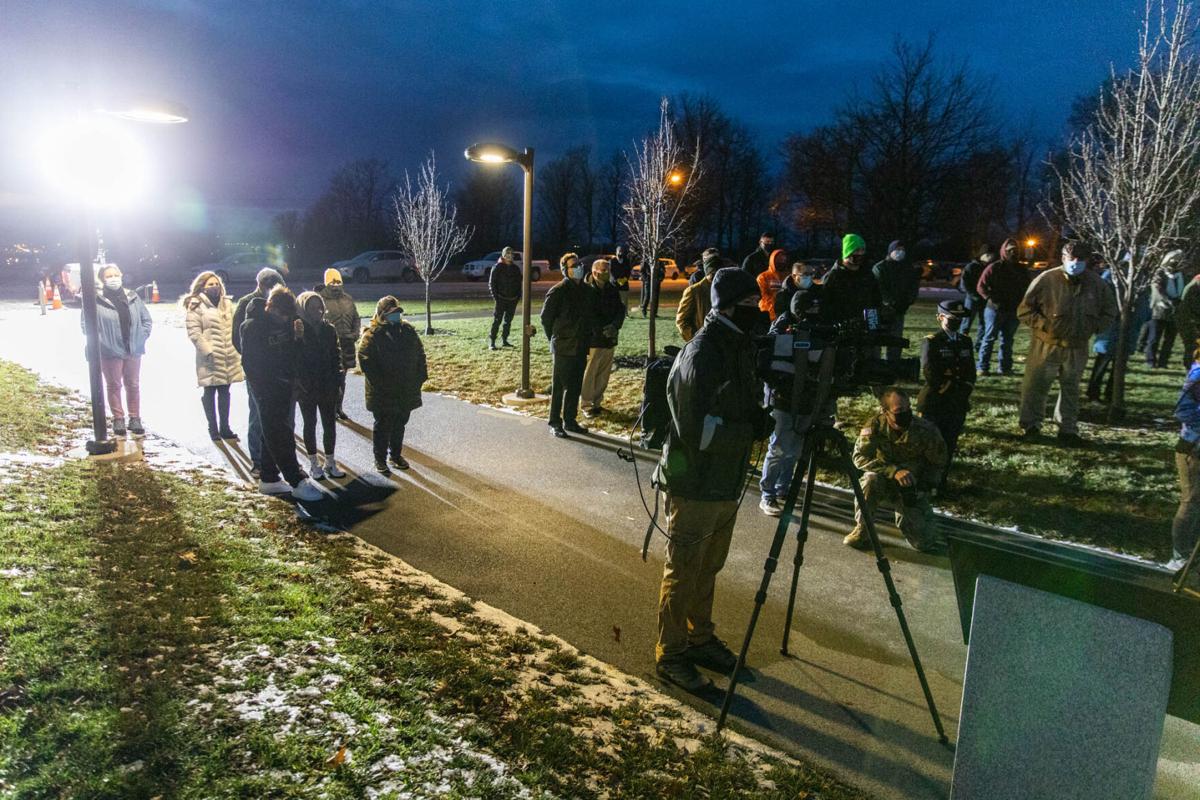 A crowds gathers at Thompson Park for a memorial service for Cpl. Hayden A. Harris, 20. Sydney Schaefer/Watertown Daily Times 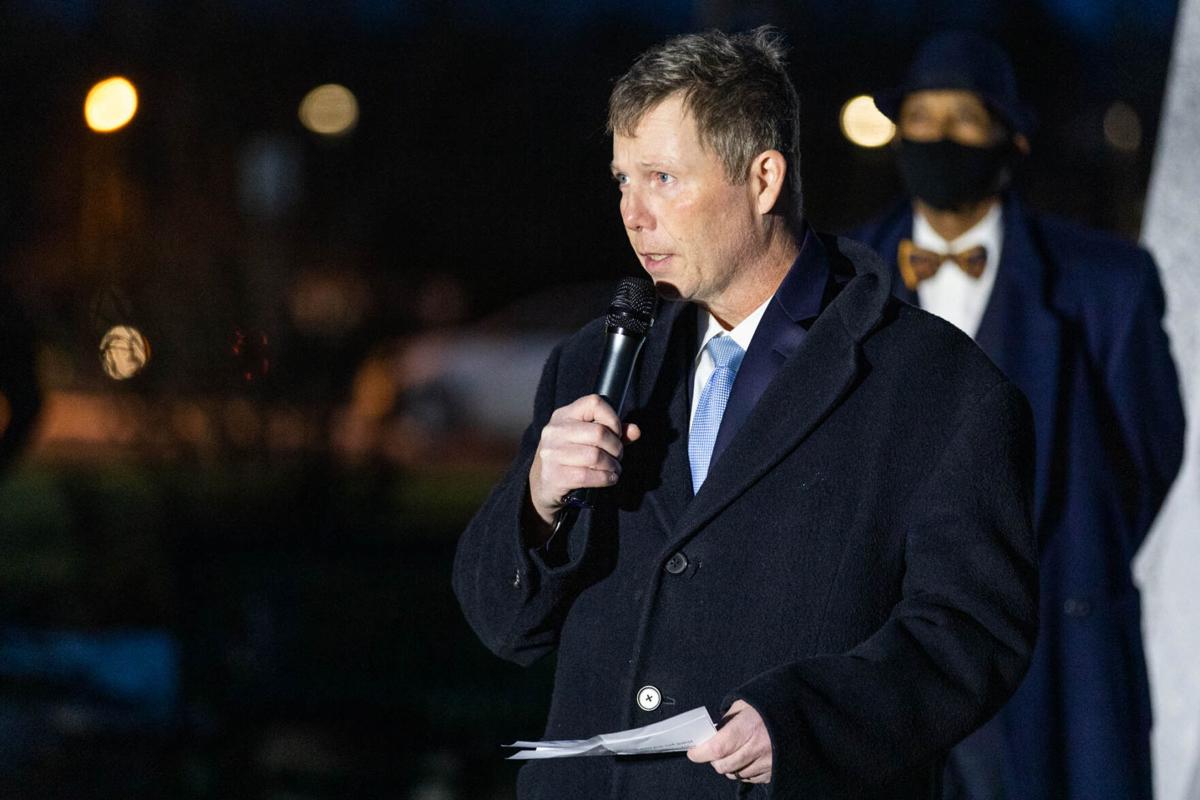 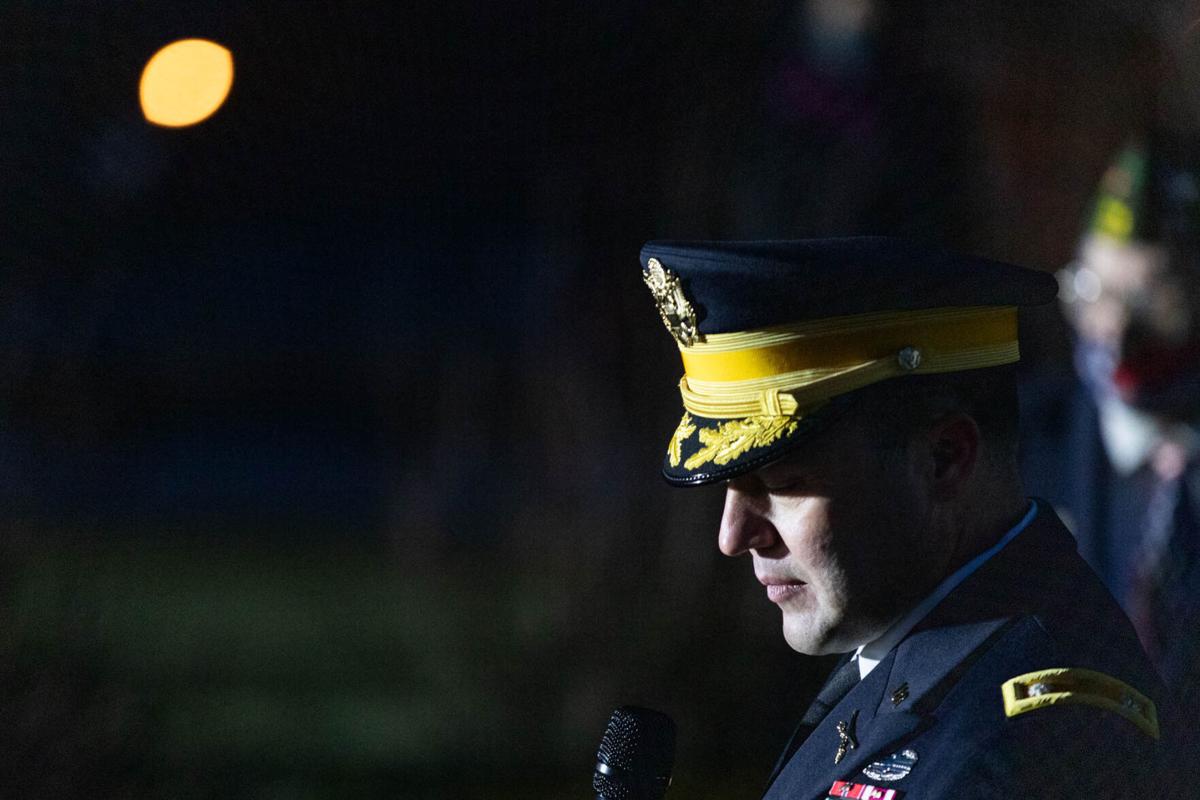 WATERTOWN — Fort Drum soldiers and the community came together in Thompson Park on a chilly winter night Wednesday to celebrate the life of a soldier with red hair and bright smile who was known affectionately as “Opie.”

His commanding officer and a sergeant in his unit described Cpl. Hayden A. Harris, 20, as a soldier who always wanted to help his comrades and become the best soldier he could.

Cpl. Harris was shot to death last weekend and left in a field in northern New Jersey allegedly by another Fort Drum soldier after the two had argued about swapping their vehicles.

Standing in front of the Climb to Glory monument, Sgt. 1st Class John Pearson and five other soldiers in his unit were joined by about 50 community members to remember him as a comrade and friend who served his country well.

“Cpl. Harris was not only a great soldier, but one of the most polite and respectful individuals I have had the pleasure of working with,” Sgt. Pearson said. “Let us not allow this terrible atrocity to consume us, instead let’s celebrate the many lessons Harris and this event has taught us.”

The Rev. Jeff Smith, of the First Baptist Church on State Street, organized the memorial to make sure Fort Drum and its soldiers know the community “will weep together” in the loss of the corporal.

His commanding officer, Lt. Col. Jon Chavous, commander of the 1st Squad, 89th Calvary Regimen, recalled how he just saw Cpl. Harris last week initiating an impromptu training session with a few other soldiers on the M249 semiautomatic rifle, just because they had a few minutes to work on it.

“That was the kind of soldier he was,” he said.

The loss of the young corporal will leave a void in the unit, Lt. Col. Chavous said. He will miss seeing the young soldier’s “bright red hair and almost permanent smile” around the unit.

The lieutenant colonel made it known he was proud that the infantryman was going to attend sniper school next month.

While the soldier was taken at such a young age, Cpl. Harris made a difference to anyone who came in contact with him, Rev. Smith said.

When he saw a picture of the corporal, Rev. Smith said he knew right away why his friends called him “Opie,” referring to the fictional character of a little boy with red hair on the 1960s television program, The Andy Griffith Show.

Cpl. Harris was called the nickname during his days as a golfer and a pitcher on his high school’s teams in a small town in Tennessee.

Mayor Butler described the corporal as “a good soldier and a great young man.”

Standing in the winter chill, with some wearing masks featuring the American flag, community members were told by Rev. Smith that Cpl. Harris will no longer have to deal with the tribulations of life because he was joining the Lord to “the Climb to Glory in Heaven.”

In his comments, Rev. Smith also made sure mourners know the meaning of the words “Climb to Glory” — Fort Drum’s motto — that are prominently displayed on the monument.

So did Sgt. Pearson.

“I love you as a fellow soldier and as a friend, may I see you again when I reach my ‘rendezvous with destiny,’ you have already ‘climbed to glory’ and your legacy will live on, I will meet you ‘at the top,’” he said.

The man arrested in connection with the corporal’s death, Pvt. Jamaal Mellish, 23, remains in the custody of Fort Drum Military Police, awaiting extradition to New Jersey. It’s expected that he will be charged with murder and weapons possessions.

Investigators believe Pvt. Mellish abducted Cpl. Harris in the corporal’s 2017 Chevrolet Silverado and drove him to Sussex County, N.J., after the two argued about trading vehicles.

Cpl. Harris was reported missing last Friday. Pvt. Mellish was apprehended after a traffic stop on outer Arsenal Street in the town of Watertown less than 48 hours later.

Sgt. Pearson thanked friends and comrades that expeditiously reported Cpl. Harris’ disappearance and “ultimately led to the fast recovery of the perpetrator.”

I am so very sorry that this fine young man was taken from those who loved and cared for him and for society, in general. People who knew him thought very highly of him so it is a great loss for all of those he could have touched later in life...if he had not been senselessly killed. Much sympathy to those who knew him.