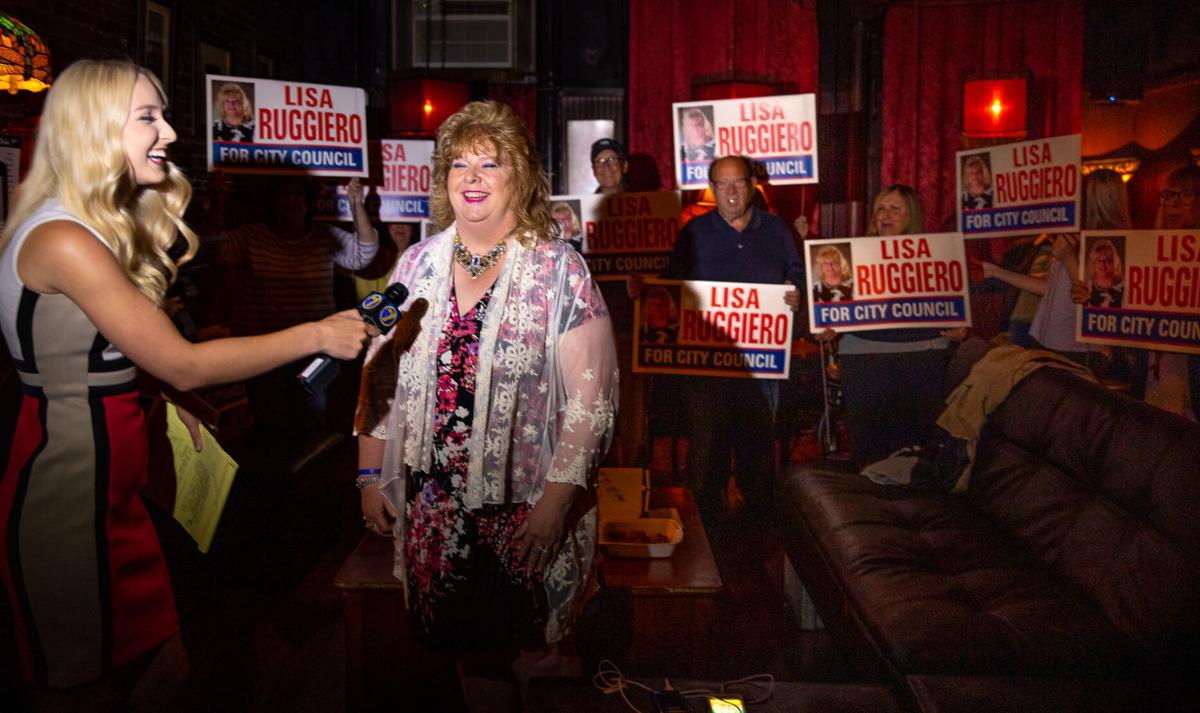 City Councilwoman Lisa A. Ruggiero, during a live broadcast with WWNY-TV 7 News, celebrates at the Paddock Club in Watertown on Tuesday night after just finding out she won in the primary election for Watertown City Council. Kara Dry/Watertown Daily Times 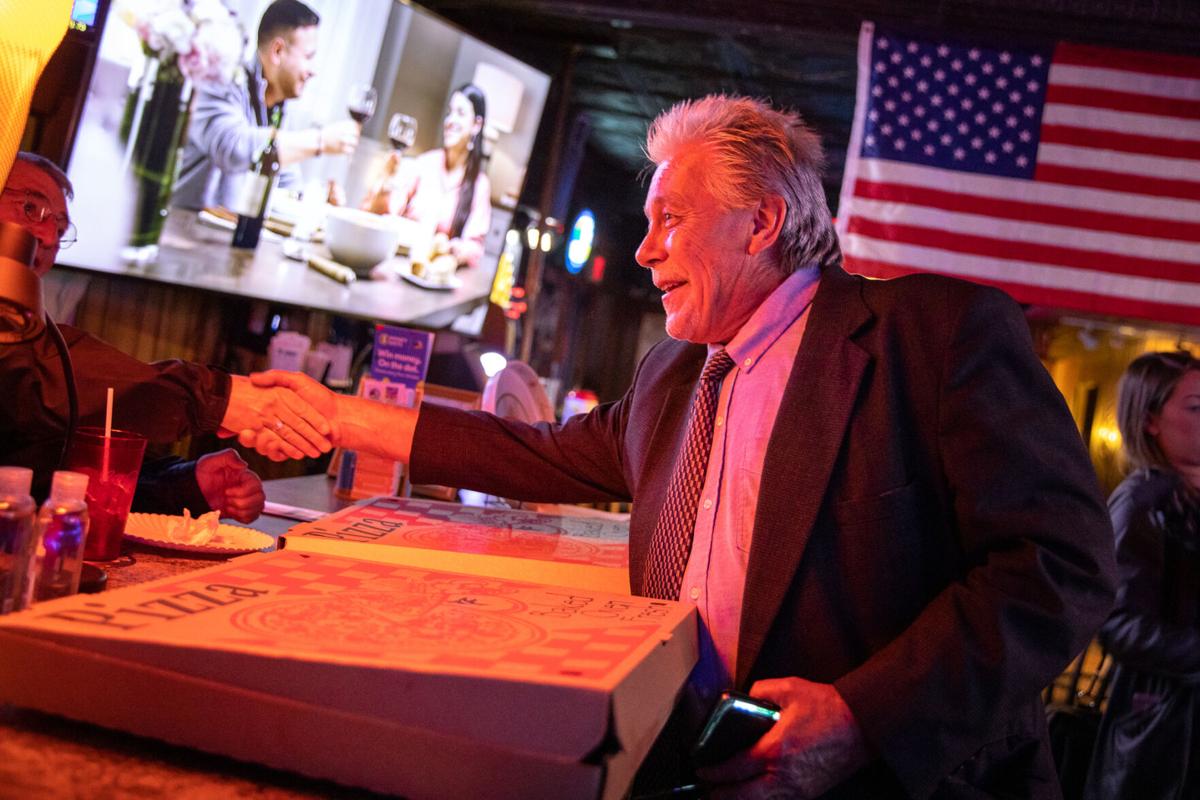 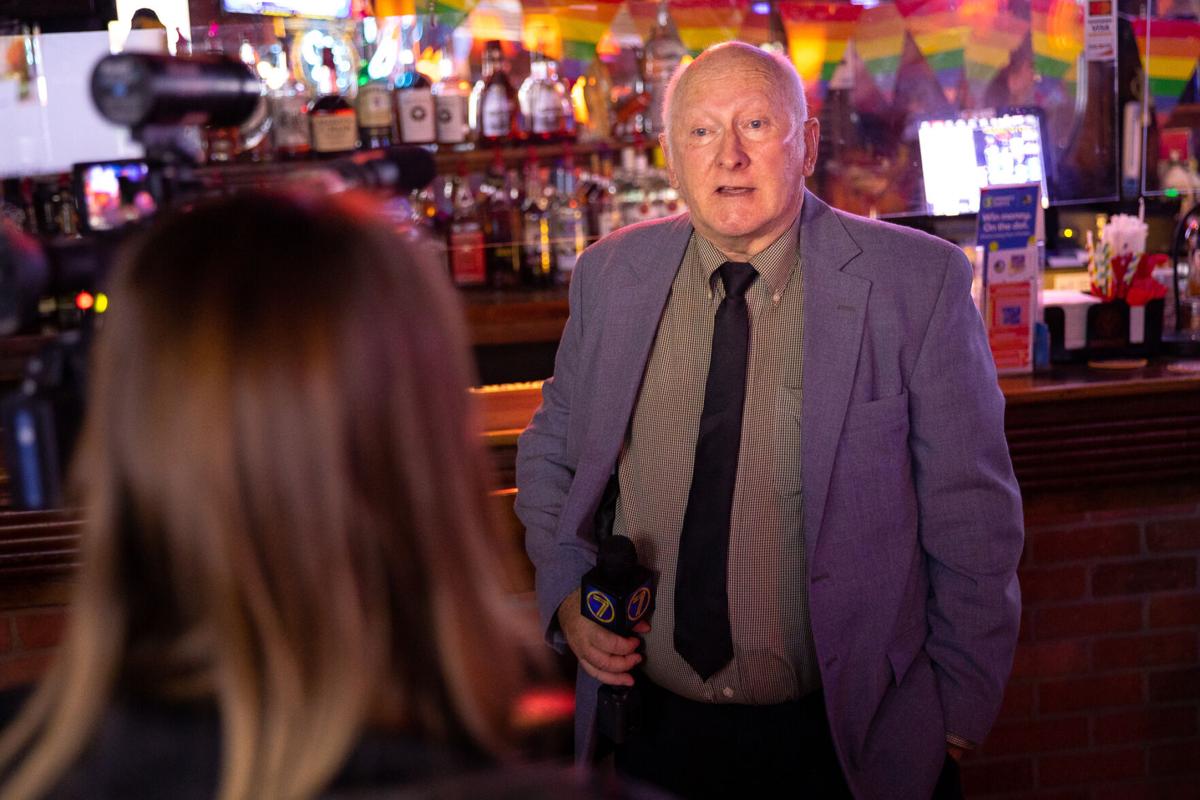 Patrick J. Hickey does a television interview at the Pearl Street Pub in Watertown after winning in the primary election for Watertown City Council on Tuesday night. Kara Dry/Watertown Daily Times

City Councilwoman Lisa A. Ruggiero, during a live broadcast with WWNY-TV 7 News, celebrates at the Paddock Club in Watertown on Tuesday night after just finding out she won in the primary election for Watertown City Council. Kara Dry/Watertown Daily Times

Patrick J. Hickey does a television interview at the Pearl Street Pub in Watertown after winning in the primary election for Watertown City Council on Tuesday night. Kara Dry/Watertown Daily Times

WATERTOWN — City Councilwoman Lisa A. Ruggiero just hoped to finish in the top four places in Tuesday’s primary so she could move on to the November election.

In a seven-candidate race, the incumbent easily placed first with 863 votes, according to unofficial results.

In thanking supporters for their votes, the councilwoman already started focusing on the November election and how she’ll continue to get their support.

“I’m looking to the road ahead,” she said, “and listening to what they want.”

They finished second, third and fourth in Tuesday’s primary, respectively, according to unofficial results.

“I’m relieved to be one of the four,” Ms. Capone said.

In a separate race, Patrick J. Hickey and Amy Horton will face off against each other for a two-year seat. Political neophyte Jason Traynor came in third in the three-way race for that seat.

But the surprises of the night were Mr. Olney and Mr. Shoen making it to the next phase to run in November.

Figuring that the incumbent and Ms. Capone would be tough to beat, Mr. Olney predicted his third-place finish, as he accumulated 409 votes. He said his surprise finish was a referendum on Mayor Jeffrey M. Smith.

“I’m going to work on what’s best for the residents, not special interests,” he said. “There’s so much more we can do for the city.”

Mr. Hickey said he was “a little surprised” to pull off the top spot for the two-year seat since Jefferson County’s Republican Party was backing Mrs. Horton in the nonpartisan race.

If elected, he’ll provide transparency to city government that residents aren’t getting now from the current administration, Mr. Hickey said.

The two-year seat opened up with the resignation of former Councilman Jesse C.P. Roshia. The council appointed Leonard G. Spaziani as a placeholder to fill out the time until the election.

Ms. Capone, who spent a quiet night at home waiting for results, said she will use the campaign to educate voters about her plans for the city. She also will listen to what they have to say about what they would like to see done.

Munching on pizza and chicken wings, Councilwoman Ruggiero gathered with about 10 supporters at the Paddock Club as results slowly came in.

She led throughout the night, first building a 52-vote spread when the first two districts were announced and continued to build on that lead.

“I just wanted to finish in the top four,” she said.

When that was obvious, her husband, Chuck, a local musician, pulled out his guitar and started performing for the small group of supporters.

She accounted her easy primary win with how she’s handled being on council and that she accomplished her campaign promises from four years ago.

During her four-year term, she’s learned that elected officials need to listen their constituents about what they want, she said. They’ve made it known that they wanted three summer pools and to save the Alteri pool at the Alex T. Duffy Fairgrounds when Mayor Smith pushed for it to close, she said.

While she had such a strong showing Tuesday, Mr. Shoen’s fourth-place finish ahead of Robert T. Shorr also was a surprise. Mr. Shoen reportedly didn’t do much campaigning and didn’t talk to some members of the press about his campaign.

Mr. Shorr was projected to go on to the primary until he made some controversial statements two weeks ago that Mayor Smith planned to shut down a fire station and lay off 15 firefighters. Mayor Smith adamantly denied the accusation.

Mr. Shorr spent the waning days of the campaign defending himself and his allegation.