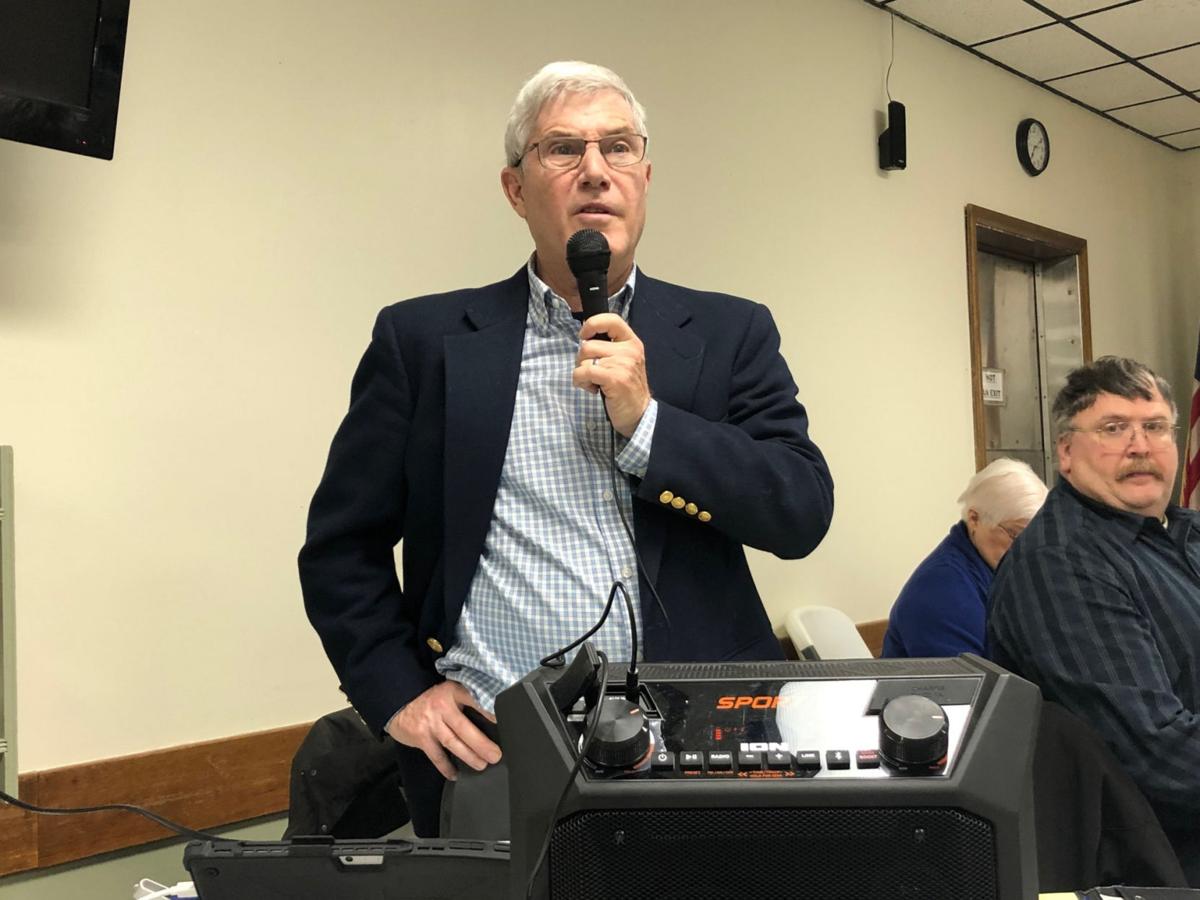 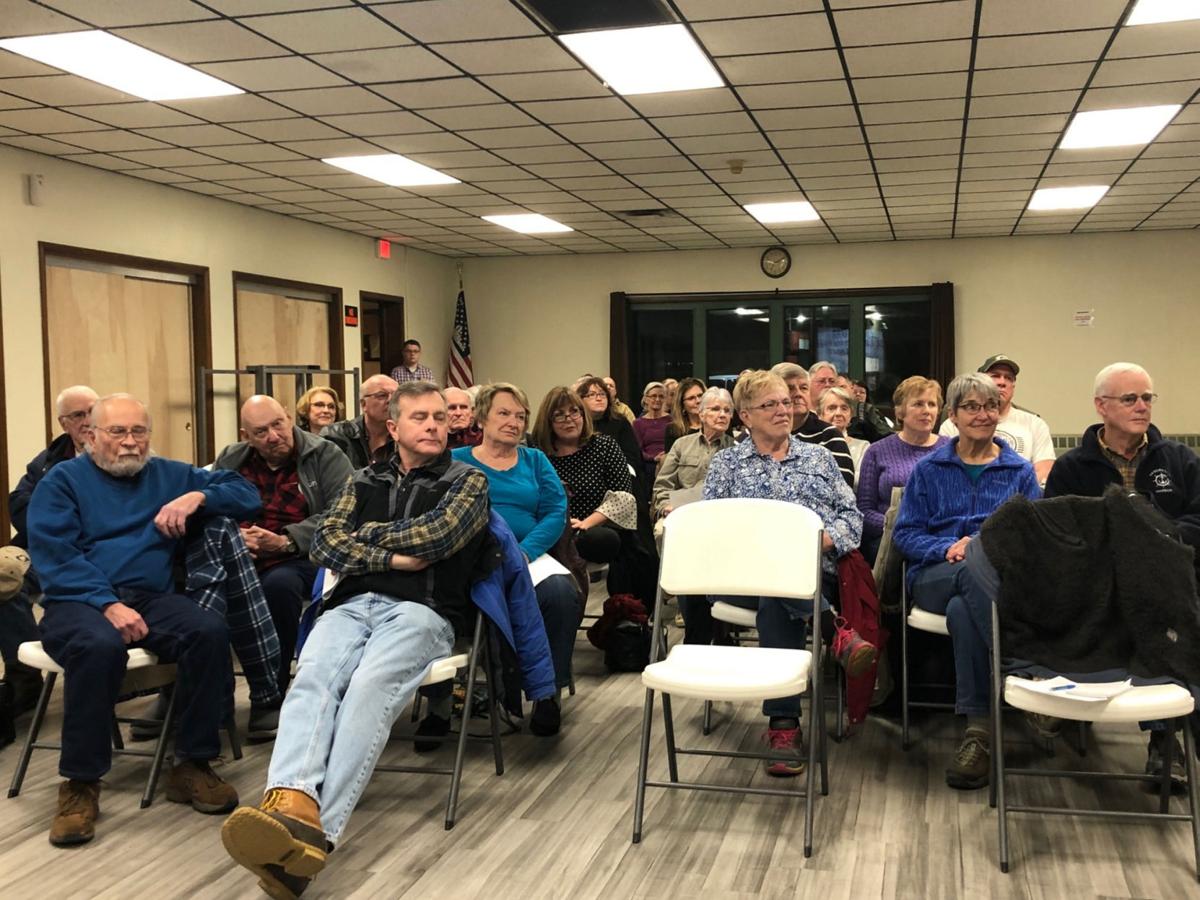 HENDERSON — A group opposed to a water level management plan for Lake Ontario is calling for litigation, lobbying and civil disobedience to force change.

And the president of that group, Lake Ontario St. Lawrence River Alliance, on Wednesday sought aid from Henderson residents, including several whose homes sustained flood damage this summer and in 2017.

About 50 people filled the Henderson Fire Department meeting room Wednesday night to listen to a presentation from Jim Shea, president of the alliance, describing how his group hopes to force revisions to Plan 2014.

The plan, adopted in 2016 by the International Joint Commission, governs how much water can be released from Lake Ontario through the Robert Moses-Robert H. Saunders Power Dam in Massena and Cornwall, Ontario, at any time primarily based on the conditions of the lake and river. The International Lake Ontario-St. Lawrence River Board manages outflows based on the plan, but has deviated from the plan in extreme circumstances, particularly to help lower water levels in the past several months.

The alliance, like many other residents, elected officials and groups, blamed Plan 2014 in part for causing the widespread flooding. Its members contend the regulations and commission favor the needs of other stakeholders, particularly the shipping industry, hydropower generation and residents near Montreal at the expense of upstream riparians.

In the hope of mitigating future flood events for shoreline homeowners along the lake and upper river, the group seeks to incorporate strict limits on how high lake levels can reach, which they contend have not been incorporated into the plan.

In an effort to force revisions to Plan 2014 and obtain reparations for flood damage, the alliance plans to hire an unspecified Washington D.C. law firm to prepare litigation against either the federal government or International Joint Commission. Mr. Shea, Fayetteville, said the group needs to raise $250,000 for it, and asked for donations from the crowd along with advocacy and membership.

The coalition also plans to not only lobby for change with its hired law firm, but also organize protests. Mr. Shea, who resides in Sandy Pond during the summers, said his group will host a rally in the spring along the Peace Bridge connecting Buffalo and Fort Erie, Ontario. The group has also discussed its issues with state and federal officials and created a petition.

“In 2020, if this flooding continues, there’s going to be a whole lot of” civil disobedience, Mr. Shea said. “We’re going to possibly do a blockade on the St. Lawrence River. Their people up on the river indicate that if it’s this bad again, they’ll do a blockade.”

The Concerned Citizens of Henderson, a local group calling for the repeal and reworking of Plan 2014, hosted Wednesday’s meeting.

David Converse, one of the riparians who founded the group, said his coalition has been gathering signatures for a petition calling for an end to the plan, which he wants to use to gather support from the town, Jefferson County and the state.

Both Mr. Converse and his neighbor, Rosemary Felio, another co-founder of the local group, both have waterfront homes that sustained tens of thousands of dollars of damage. Mrs. Felio said she plans to join the Lake Ontario St. Lawrence River Alliance.

“(We wanted people to) just be aware of other groups out there that are trying to do the things we’re trying to do,” Mr. Converse said.

Where by chance do you live it sure is not on the Lake or River ?

This is very serious for those who do and for what it’s worth problem didn’t ever happen except for a a problem in the 70’s early 90’s and they were very short lived. In 2017 and 2019 it has had the most impact ever in financial cost. It also has been since the shipping season has been allowed to operate for over 3 weeks in the fall and start 3-4 weeks earlier in the spring. This has allowed for significantly less drawn down of the lake system and caused the flooding. This process is called Plan 2014.

Look at the big picture Rambo.. articles from other sections of the Great Lakes...they has NO Plan 2014 and NO increased shipping..... 6 more week's of + 10% drawdown is supposed to offset this??

High Water Article last week in Detroit... "USACE - The mean levels for lakes Superior, Michigan, Huron, Erie, St. Clair and Ontario were about a foot higher than the same month in 2018, according to the monthly bulletin from the Army Corps' Detroit office." "The levels findings the corps released this week come after the Great Lakes Basin saw its wettest 60-month period ending Aug. 31 in 120 years of record-keeping, according to corps records."....

That was the report Friday from the International Lake Superior Board of Control that warned lakeshore residents to “prepare for potentially severe coastal impacts, especially during periods of strong winds and high waves.” "Lake Superior is a whopping 13 inches above its normal Jan. 1 water level and a full 4 inches above the Jan. 1, 2019 level one year ago."..........

The high water isn't coming from here... it's the mid-west and Great Lakes title basin.. Lake Superior alone is larger than all the rest of the Great Lakes Combined..it's the world's largest freshwater lake.. and we think a 10% increase in outflow is going to affect that? So lets stop shipping, and flood Montreal, that'll fix it.. Tunnel vision... raise your seawall...put in floating docks..

Soooo blaming IJC for water in Lake Superior being 18" above normal..as well as the other Great Lakes being at historic levels... Good Luck with that... Same weather flooded my cellar this past Spring... can I get some money too?? You live on a shoreline...you take your chances... and leave the shipping alone..

I posted a comment this morning, January 25th. Our cottage is in Muskoka District, Ontario. It’s in the Great Lakes Watershed. I should live so long to see water levels 18” above normal. In Spring 2019, we were 60” above normal summer levels. We studied our lakes typical fluctuations, developed a lakefront design to accommodate this fluctuation, and constructed our cottage in late 1990’s to accommodate those fluctuations. We did not scream to the IJC or the water management board. We came, we saw, we conquered, eh? And Muskoka experienced hundreds of millions of dollars in damages in 2019.