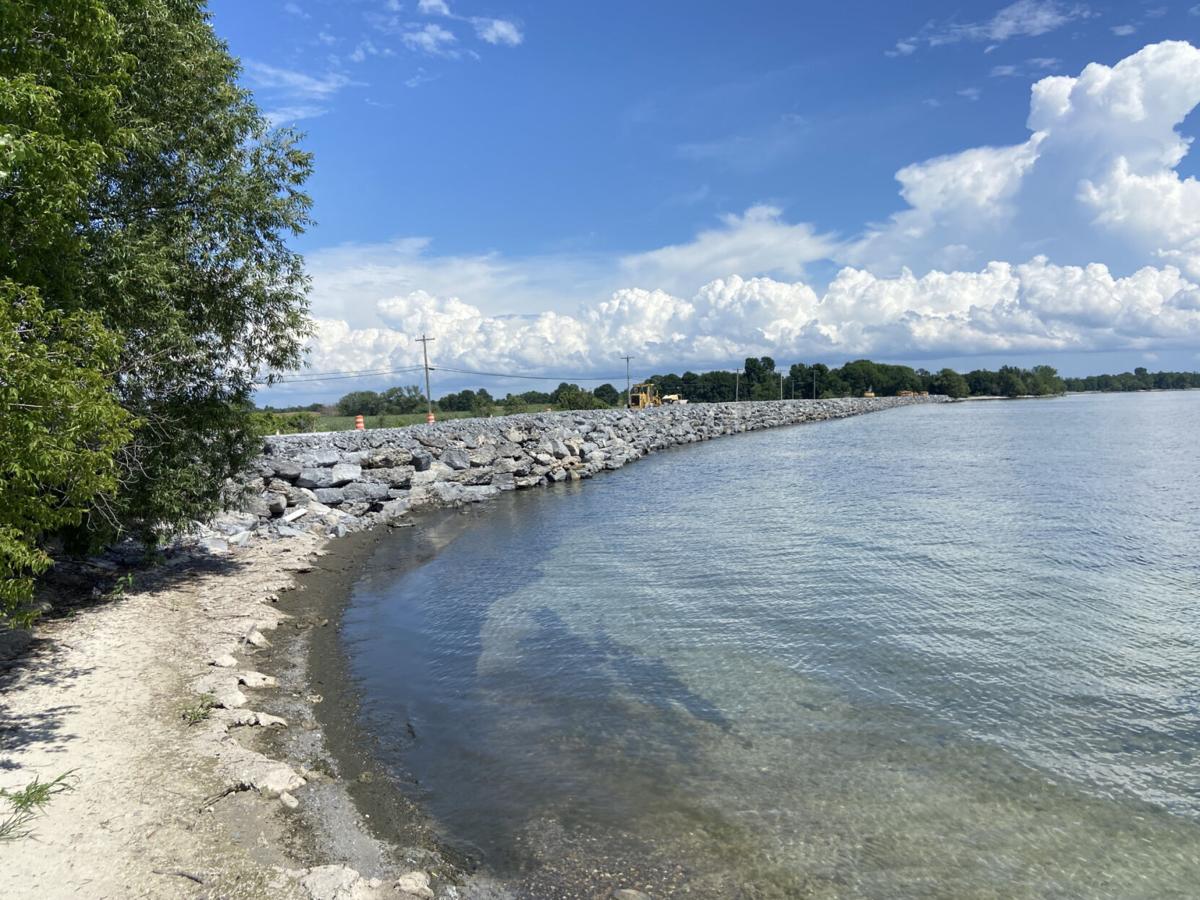 A turtle crossing was included in a $5.4 million project to raise Isthmus Road on Point Peninsula by about 3 feet, funded by the REDI Commission. Alex Gault/Watertown Daily Times 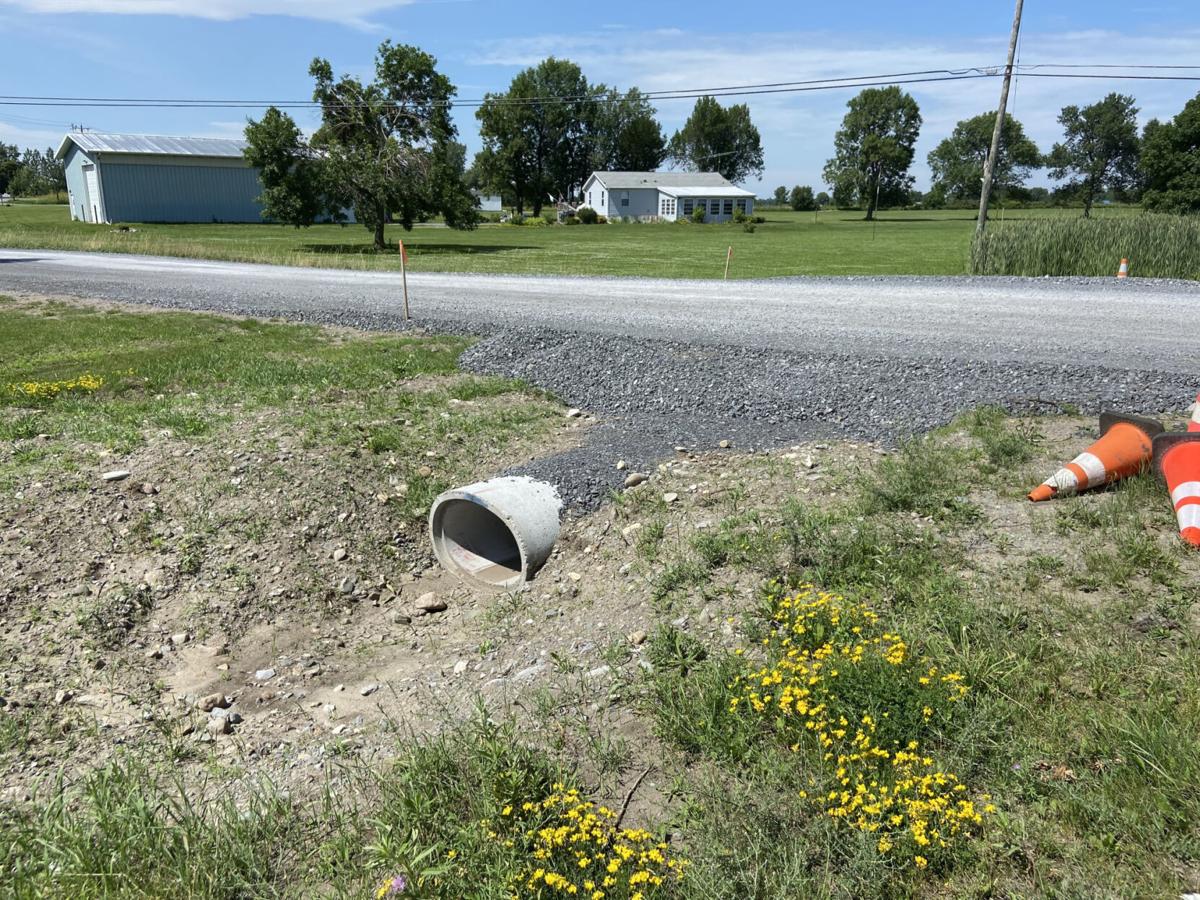 The northern side of the turtle crossing underneath Isthmus Road, which will permit turtles, especially the threatened Blanding’s turtles, to cross between the Chaumont Bay and Lake Ontario without getting hit by cars. Alex Gault/Watertown Daily Times

A turtle crossing was included in a $5.4 million project to raise Isthmus Road on Point Peninsula by about 3 feet, funded by the REDI Commission. Alex Gault/Watertown Daily Times

The northern side of the turtle crossing underneath Isthmus Road, which will permit turtles, especially the threatened Blanding’s turtles, to cross between the Chaumont Bay and Lake Ontario without getting hit by cars. Alex Gault/Watertown Daily Times

CHAUMONT BAY — The Jefferson County Highway Department just installed its first official “turtle crossing” meant to help a local threatened species of turtle move between the Chaumont Bay and Lake Ontario without getting hit by cars.

The crossing is a buried concrete pipe, which connects a marshy area of the Chaumont Bay to a space near a state-owned boat launch into Lake Ontario. Nearby populations of Blanding’s turtles, with their characteristic yellow chin and throat, are relatively plentiful in the area and can pass through the tube without ever having to cross the road above.

As part of a $5.4 million project funded by the Lake Ontario Resiliency and Economic Development Initiative to raise County Route 57, also known as Isthmus Road, and prevent it from flooding during high water events, county highway crews worked with the state Department of Environmental Conservation to install the roughly 100-foot long oval concrete pipe underneath the roadway.

Professor Glenn Johnson, a doctor of conservation biology and a professor at SUNY Potsdam, said protecting Blanding’s turtles from traffic is one of the main conservation efforts to protect the animals.

“Roads are a major threat to Blanding’s turtles,” he said. “There are aspects of their life history that puts them at more risk than other species of turtle.”

The turtles are especially at risk because they don’t sexually mature until they’re nearly 20 years into their 80-year lifespan. When turtles are killed before they can reproduce, population numbers can quickly drop, especially if the turtle was female.

“This species does wander the landscape more than painted turtles or snapping turtles, the other common turtles, so that’s a factor as well,” Dr. Johnson said. “The biggest risk, however, is to the females when they’re going to a nesting area, away from the wetland where they spend most of their time, and they cross a road.”

On Isthmus Road on Point Peninsula, state DEC officials said that specific site was chosen because the road had no other crossing structures to allow wildlife to cross, the nearby wetlands are an already sensitive habitat and they host a healthy population of Blanding’s turtles.

The turtles are common along the lake and river shores in Jefferson and St. Lawrence Counties in New York, and this is where they have the strongest numbers in the state. Blanding’s turtles can be found along the Great Lakes and into the upper Midwest, and their strongest populations are in northern Nebraska, according to Dr. Johnson.

There are other turtle crossing structures in the region, including one in the Wellesley Island State Park and another one underneath a major road in St. Lawrence County. DEC officials said preliminary information from the St. Lawrence County crossing has brought the mortality rate for turtles down to zero in that area.

Dr. Johnson said there are a number of other conservation efforts he and DEC officials are undertaking in an effort to prevent further population decline among Blanding’s turtles. The first step, and one that he’s been using for years, is turtle crossing signs. The signs are installed in places where the turtles are most likely to cross the road, and the hope is that motorists keep their eyes out for turtles after seeing one. Dr. Johnson said he and DEC officials fold the signs up when the turtles won’t be likely to cross the roads as often, to keep people from getting used to them.

He also said barriers preventing the turtles from getting onto the roads are another useful tool, and are especially helpful when coupled with turtle crossings underneath those roads so the turtles aren’t cut off from their habitats or breeding sites.

Conservation experts also stress that the turtles should be kept in their natural habitats, and it is a crime to take possession of any species of animal included on the state or federal list of protected or endangered species.

Finally, Dr. Johnson said he and DEC officials have found it useful to create nesting habitats in safe places that the Blanding’s turtles can easily access, so they don’t nest in subpar or dangerous habitats. The turtles’ nests are preyed upon by raccoons and skunks, so researchers and DEC officials also regularly protect nests they find to keep the populations healthy.

Dr. Johnson said the science has not been done yet to ascertain if the population is truly doing better after over a decade of conservation efforts, but anecdotally he has started to see more young Blanding’s turtles than in years past, which may indicate some level of success.

“It’s likely that our nest protection measures and the other measures are leading to some improvements to the population, maybe stabilizing them,” he said. “We have to do the research to make sure though.”