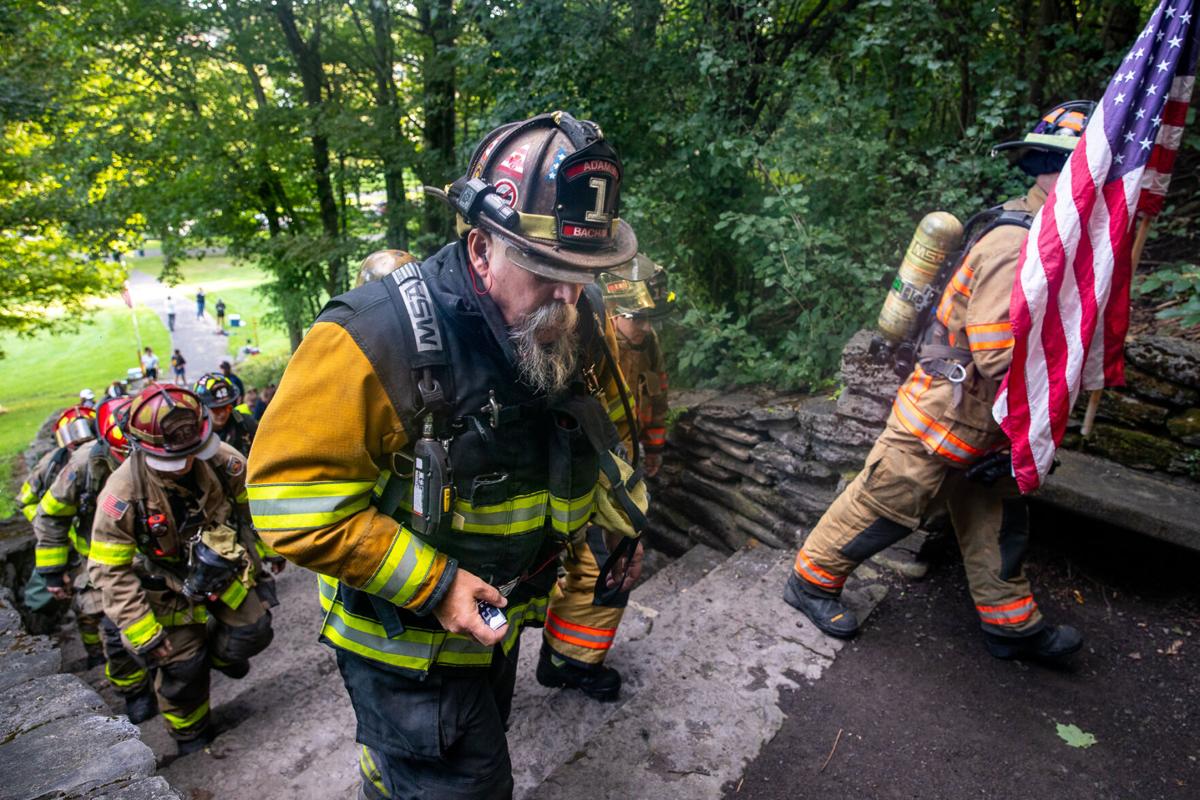 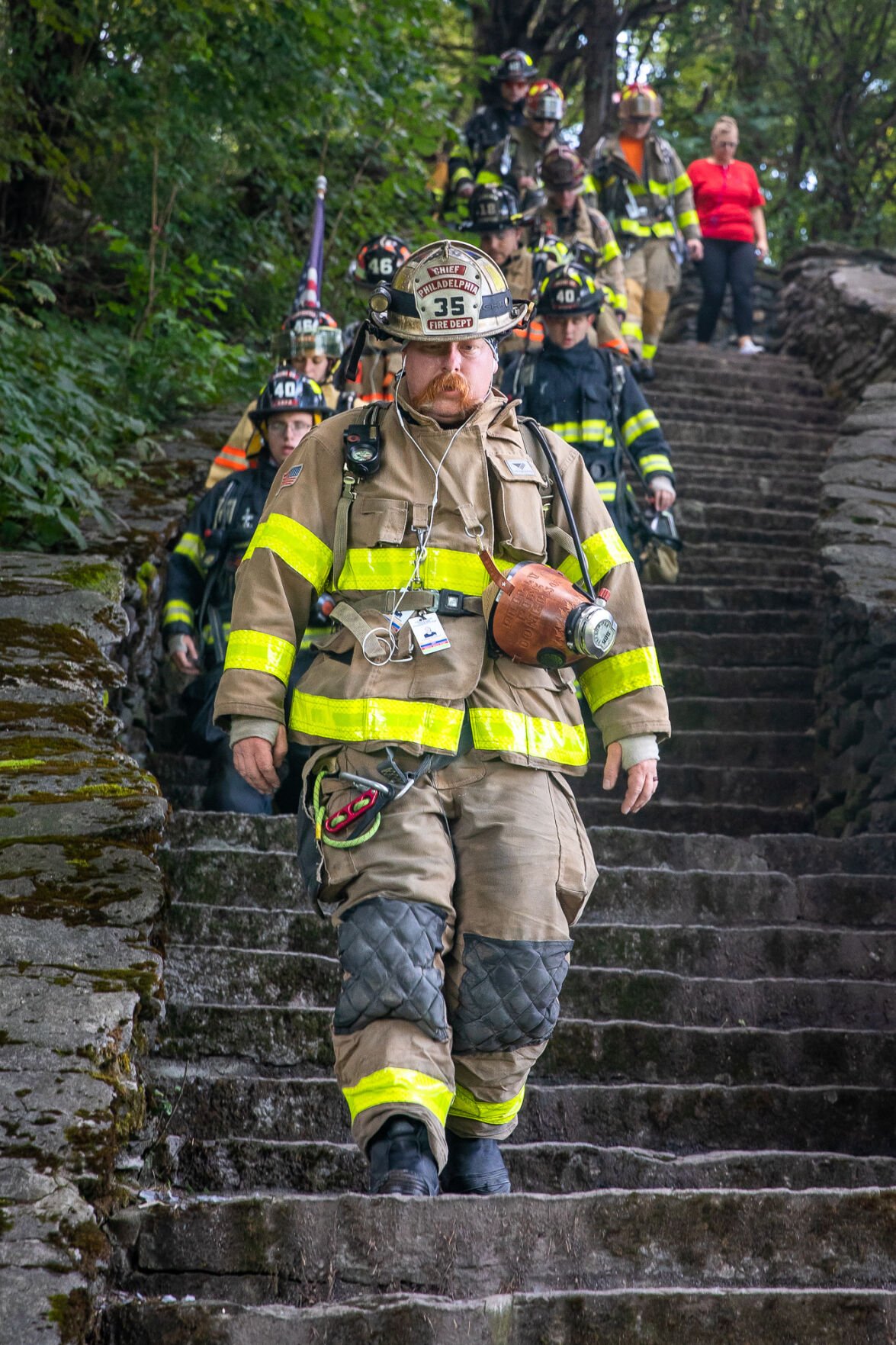 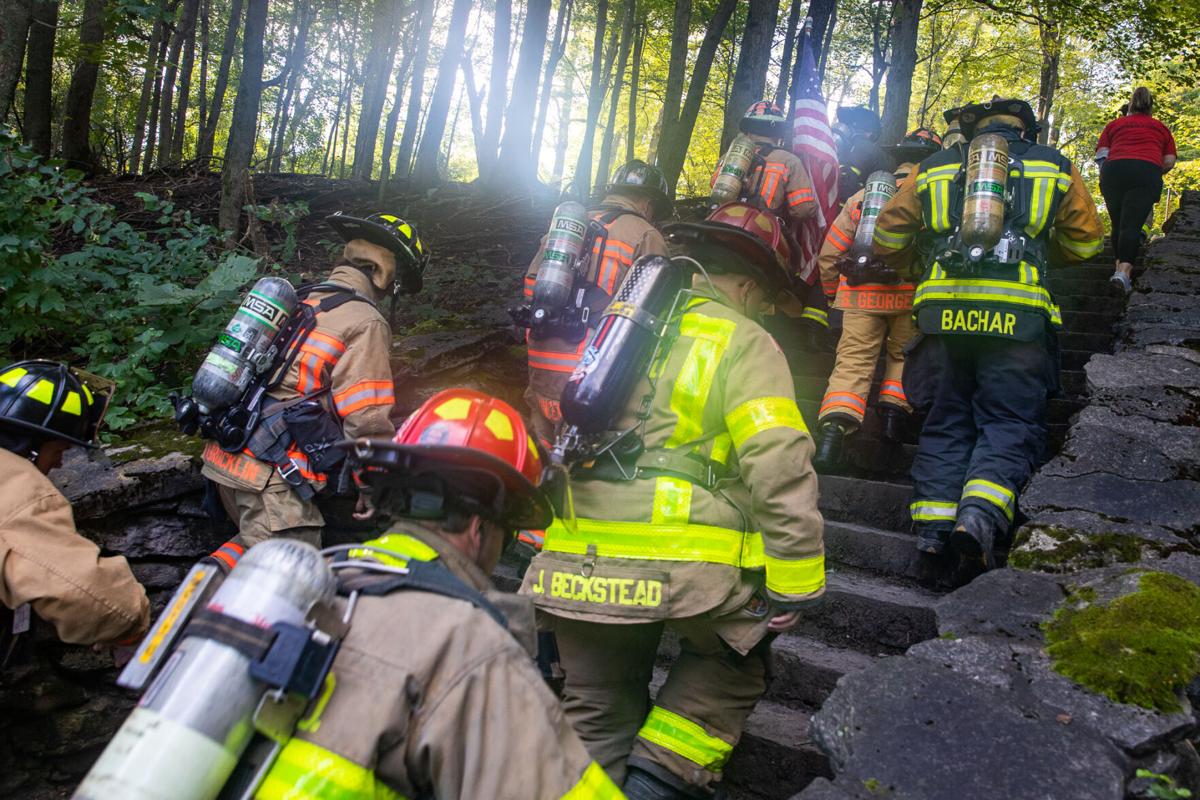 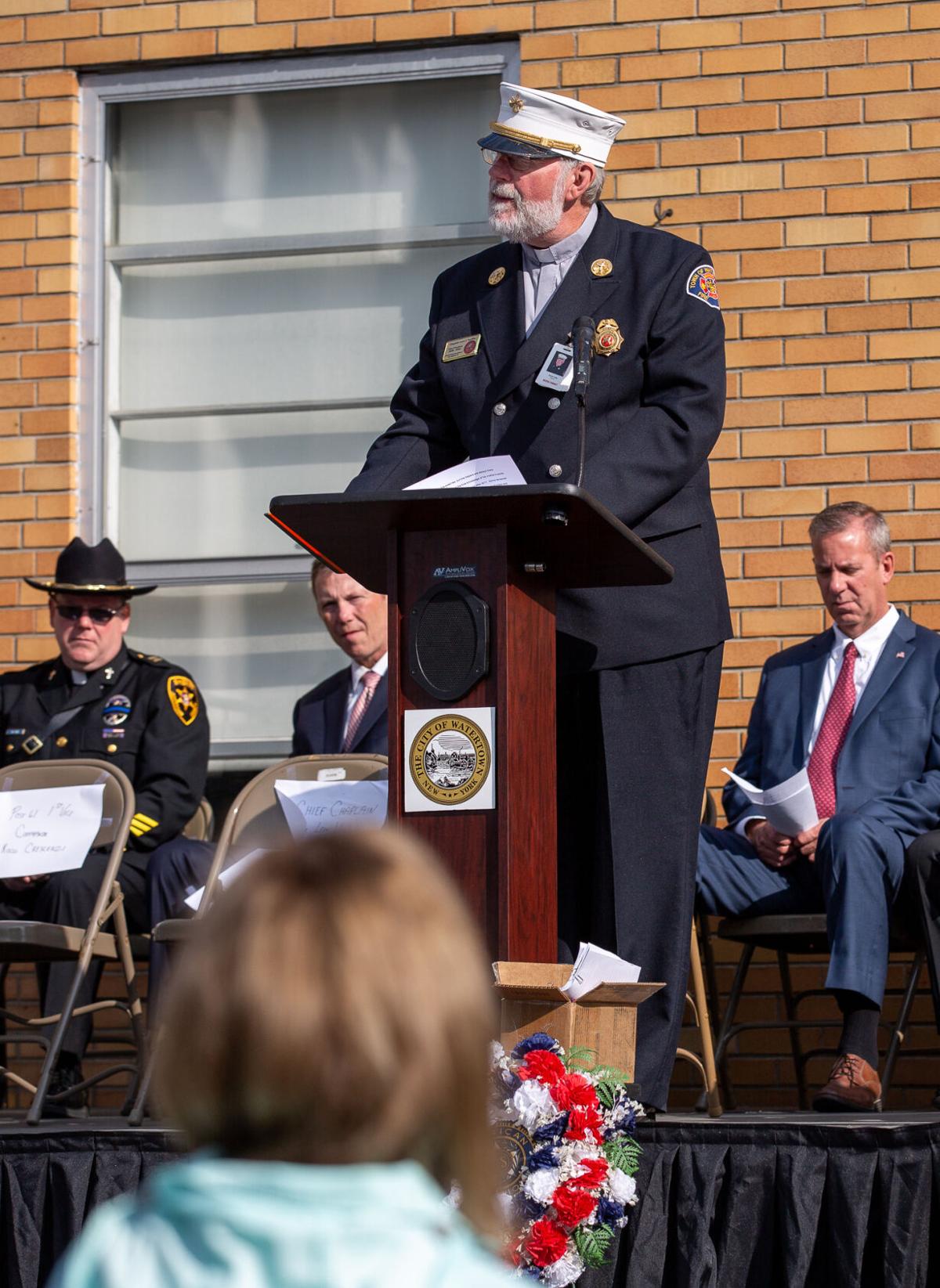 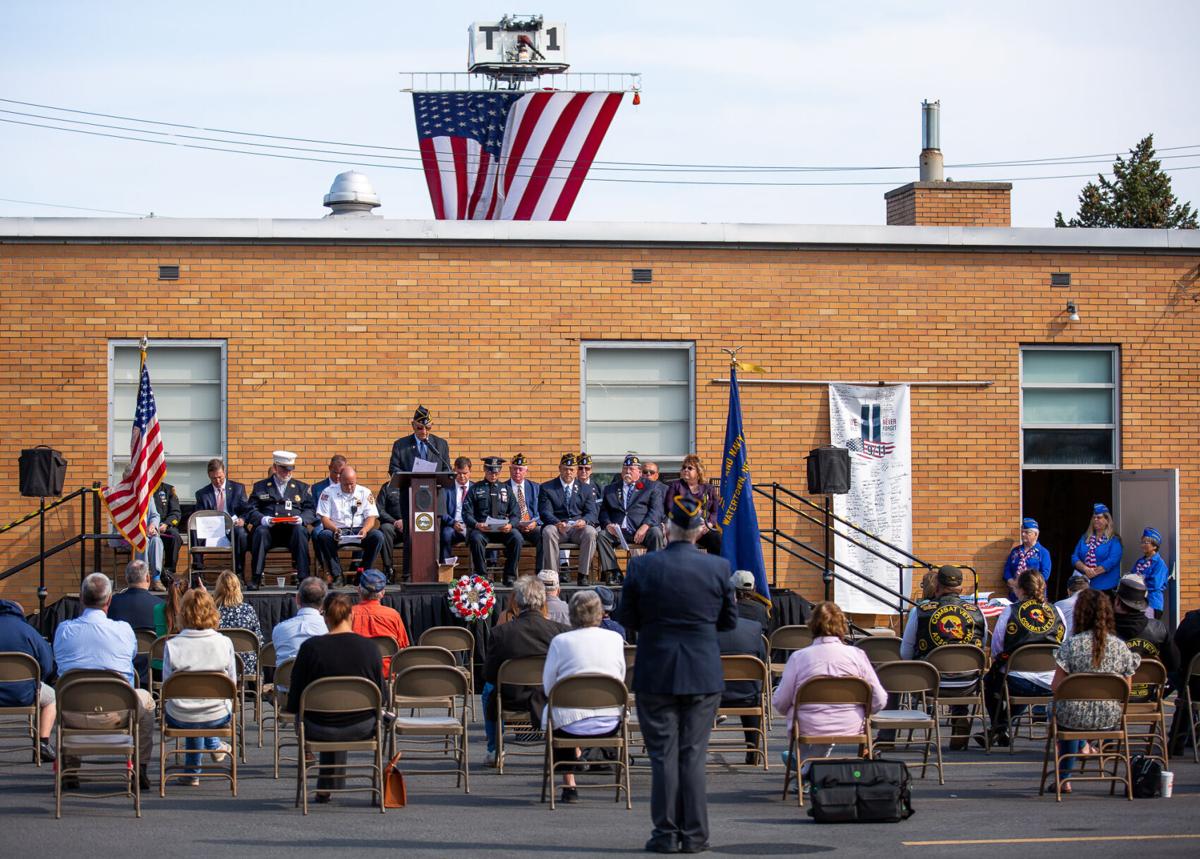 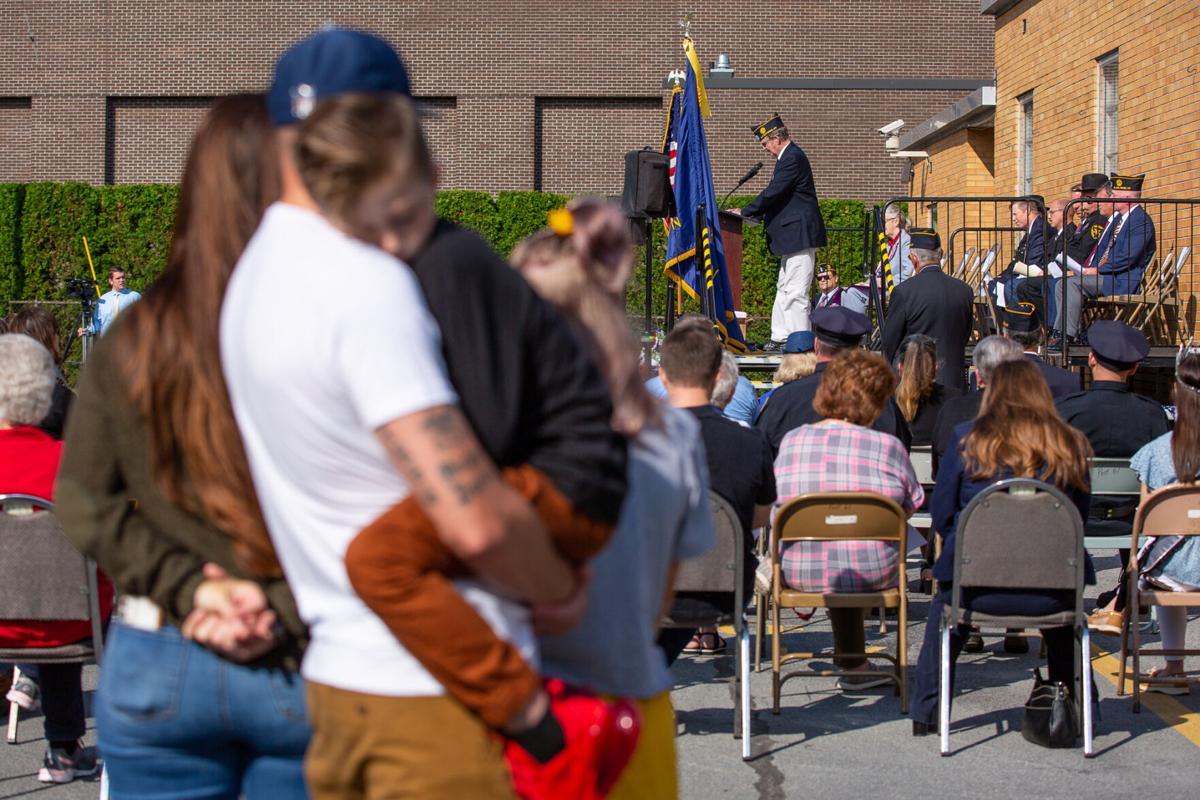 WATERTOWN — As a group of local leaders and first responders gathered behind the American Legion for a remembrance ceremony Saturday morning, a group of firefighters were in full gear and climbing stairs a few blocks away.

About 100 people gathered at the American Legion Army and Navy Post 61 on Sterling Street for the 20th anniversary of the 9/11 attacks. Elected officials and representatives from fire and police were there to share their own stories and honor the first responders who worked on Ground Zero for weeks. The names of the first responders who died on 9/11, as well as the Fort Drum soldiers who died in the war on terrorism that followed the attacks, were read aloud to the crowd.

Leon VanWie, the chief chaplain of the New York State Association of Fire Chaplains and retired Methodist pastor, spoke to the crowd as well. He spoke in part about how the fire service continues to honor the first responders who died. He mentioned that one way is the national firefighters stair climb.

Firefighters from around the country will dress in full gear — often about 75 pounds — and climb the 110 flights of stairs that the New York City Fire Department climbed in the north tower. Around 343 FDNY firefighters died after they climbed 110 stories in a rescue attempt. As Mr. VanWie made those remarks, a group of firefighters mostly from Jefferson County were climbing stairs at Thompson Park. Philadelphia Fire Chief Travis Donelson organized most of the climb, and he spoke before they began seven trips up and down the flight of stairs they usually train on every year.

“Twenty years ago, as of one minute from now, our country got under attack,” Mr. Donelson said. “FDNY headed to the north tower for what would have initially been an automatic fire alarm. Not every automatic fire alarm is the same. We said 20 years ago we would never forget. Here we are, 20 years later and we haven’t forgotten. Some of the country may have, but not us.”

Mr. VanWie said back at the ceremony that those firefighters were climbing because they vowed never to forget. He mentioned Father Mychal Judge, who was serving as a chaplain for the New York City Fire Department on 9/11. Mr. Judge entered the north tower lobby on 9/11 and offered aid and prayer to those injured. When the neighboring tower collapsed, debris went through the lobby and killed Mr. Judge, making him the first confirmed FDNY fatality in the attacks.

Mr. VanWie spoke about how the country was shaken after the attacks. More than 3,000 lives were lost, the Manhattan skyline was changed forever, the economy was tested and a 20-year war on terrorism was beginning.

“A lot more than buildings of mortar and steel were shaken up by the events of Tuesday, Sept. 11, 2001,” he said. “On Sept. 11, the assumption that it can’t happen here had been jolted from us, or shaken. America experienced a shaking that reached into our very roots, our very souls.”

And it was the first responders and civilians who came together that began the healing.

“Twenty years later, buildings have been rebuilt, memorials established and remembrances held,” he said. “As a fire service mourned the loss, it was clear we would never forget.”