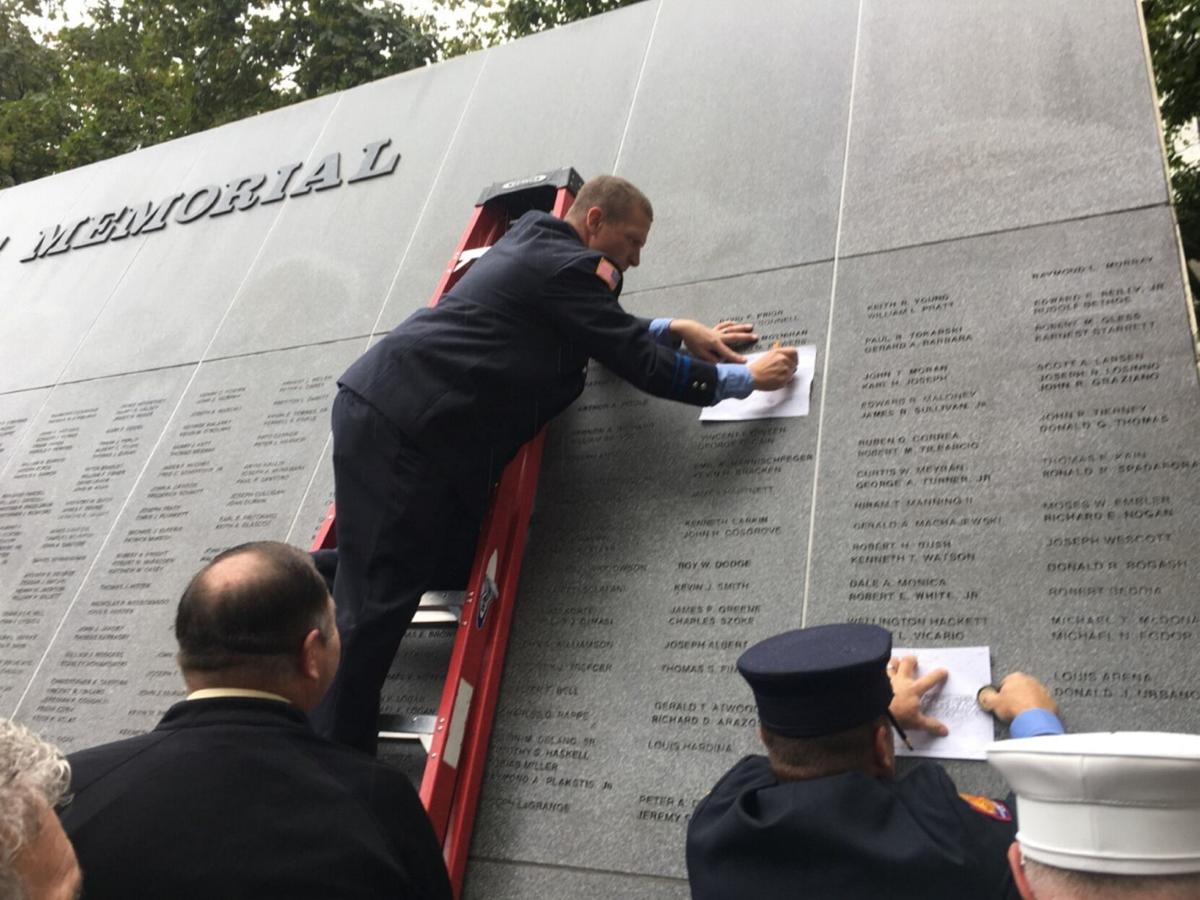 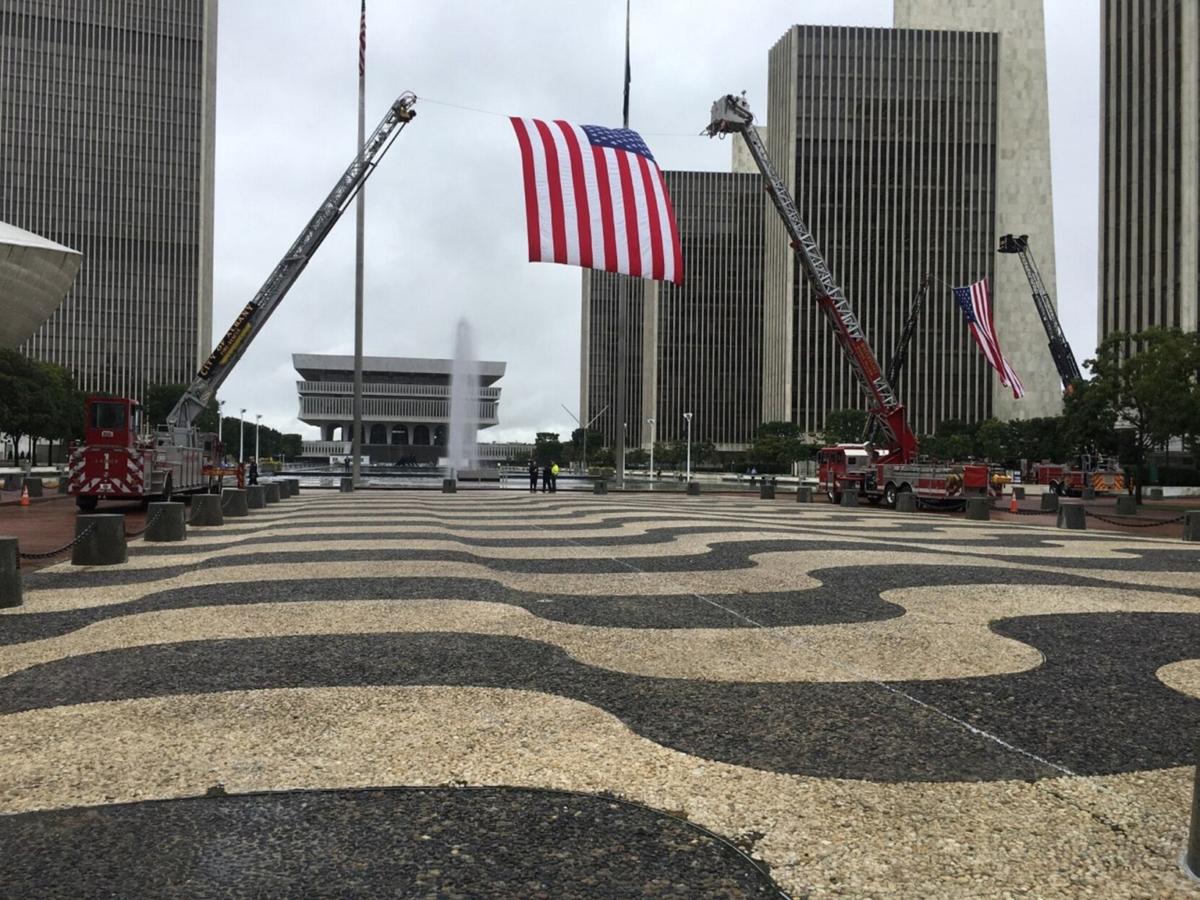 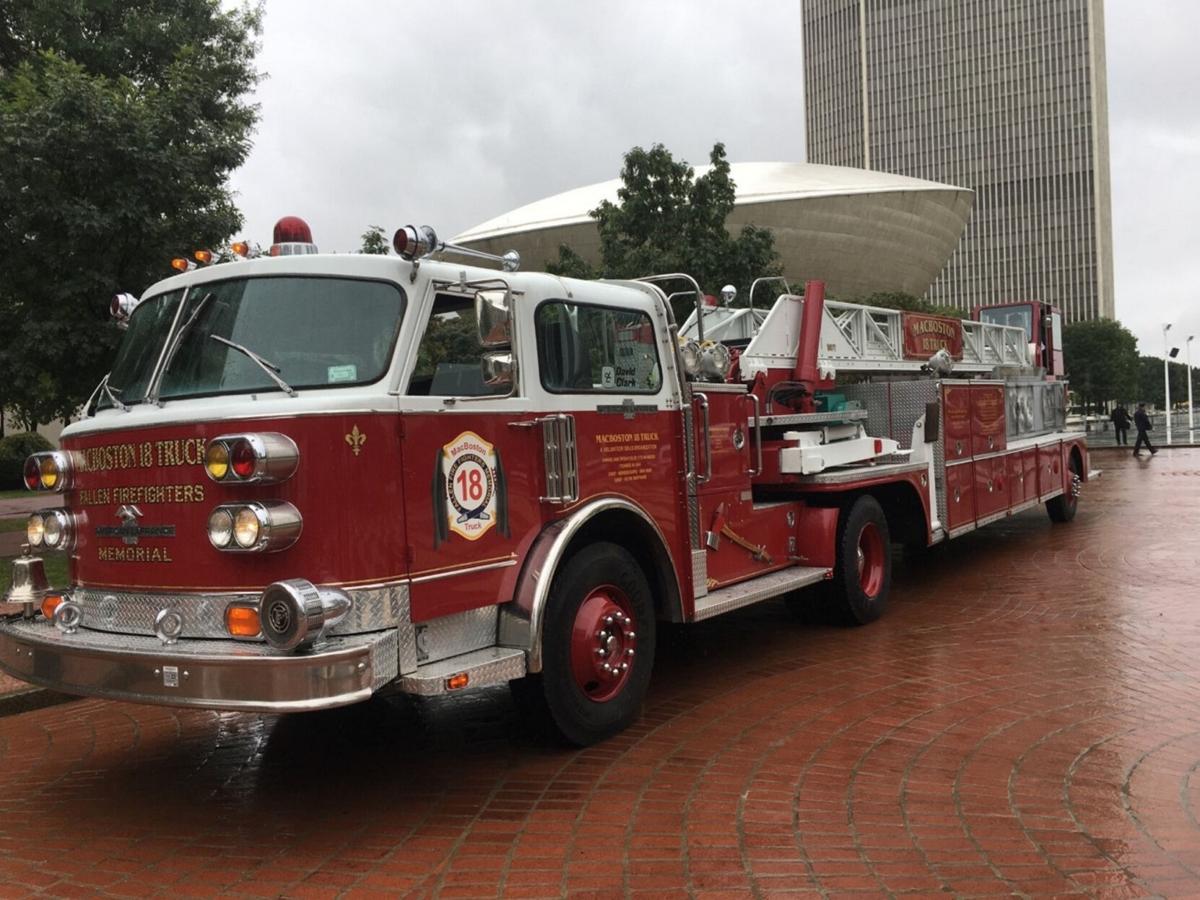 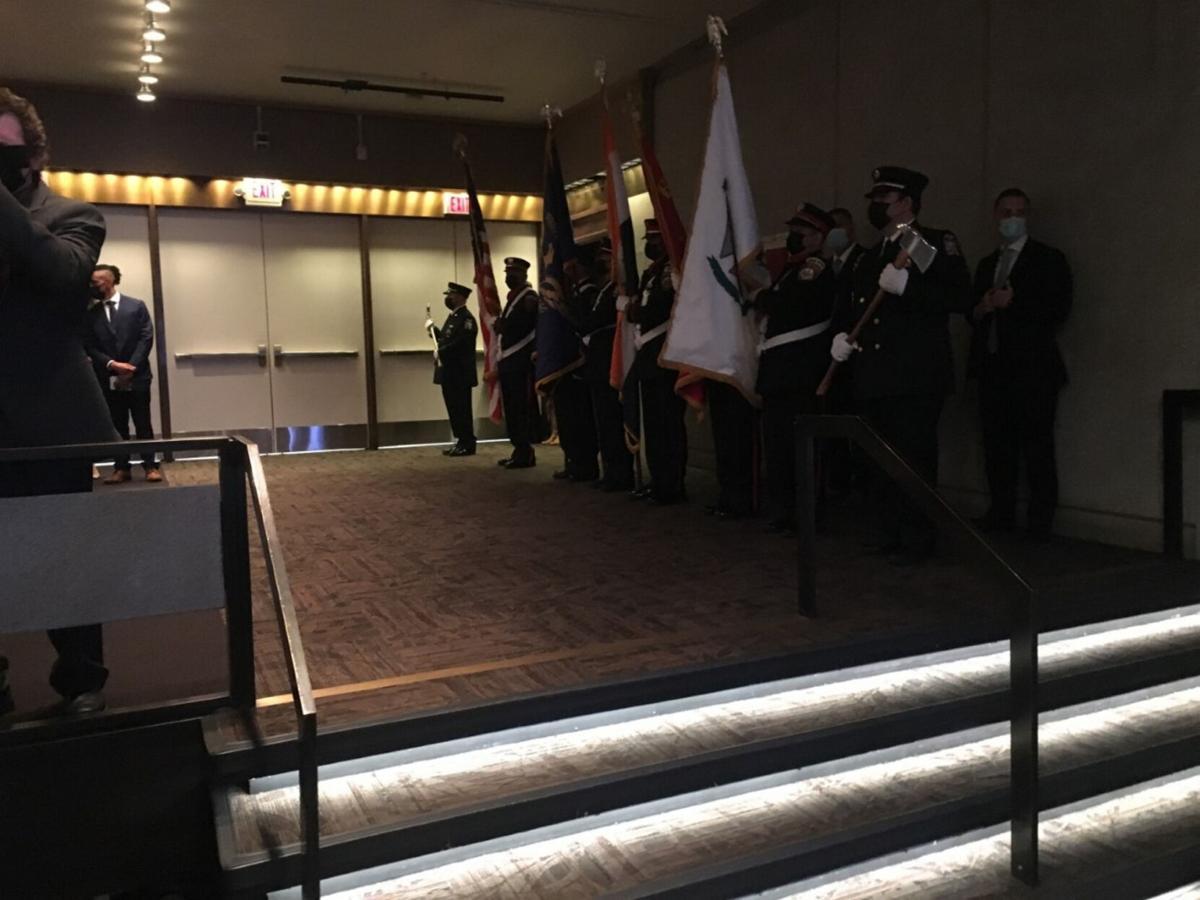 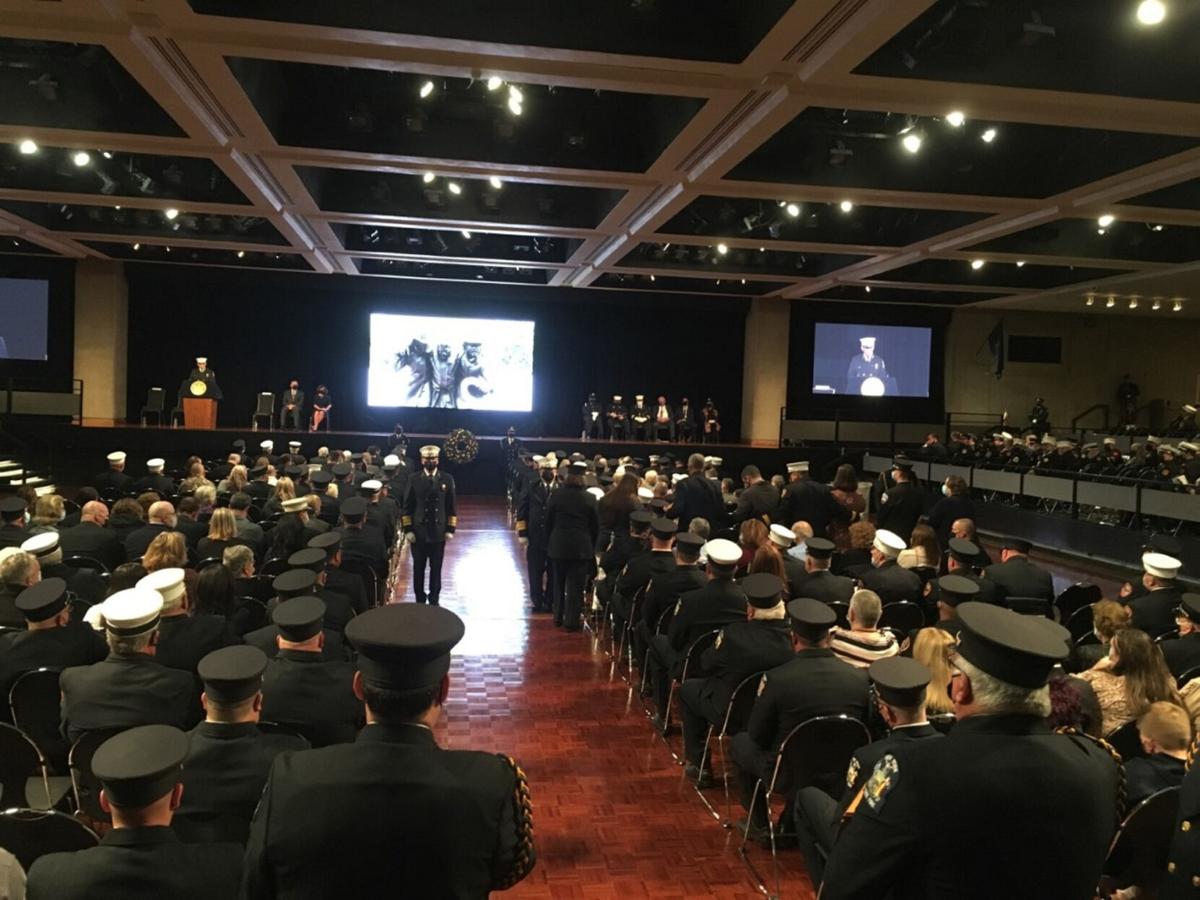 Hundreds of firefighters from across the state attended the Fallen Firefighters Memorial ceremony at the Empire State Plaza in Albany. Craig Fox/Watertown Daily Times 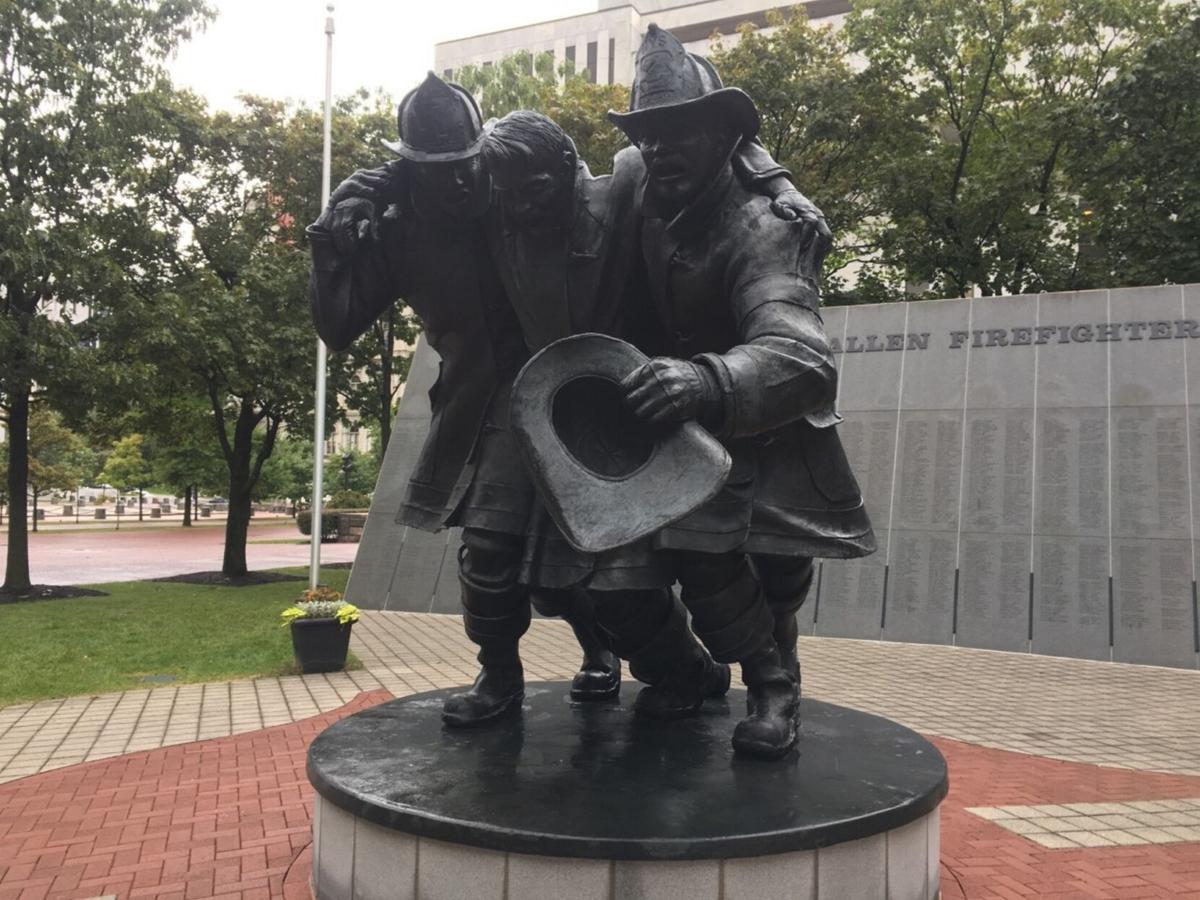 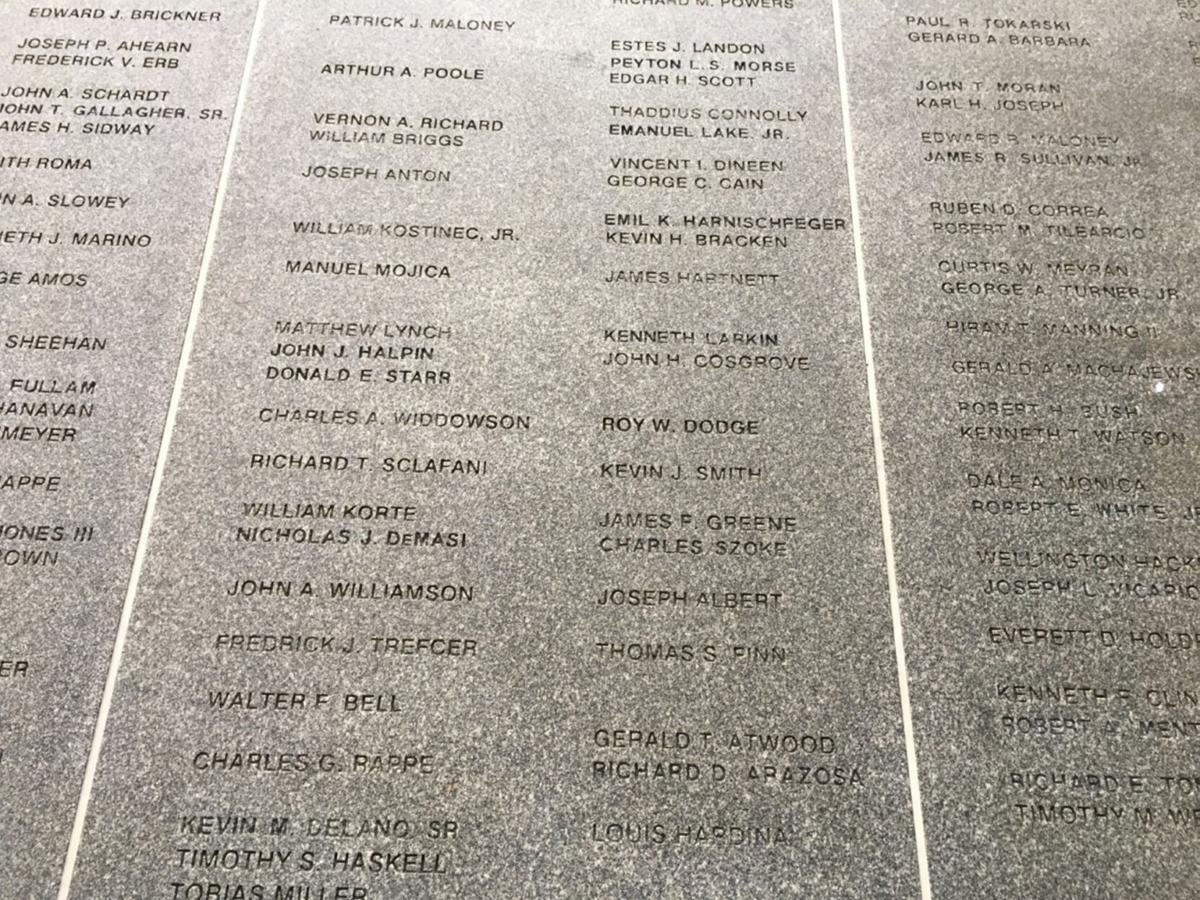 Peyton Morse’s name is etched in the wall at the state Fallen Firefighters Memorial in Albany. Craig Fox/Watertown Daily Times 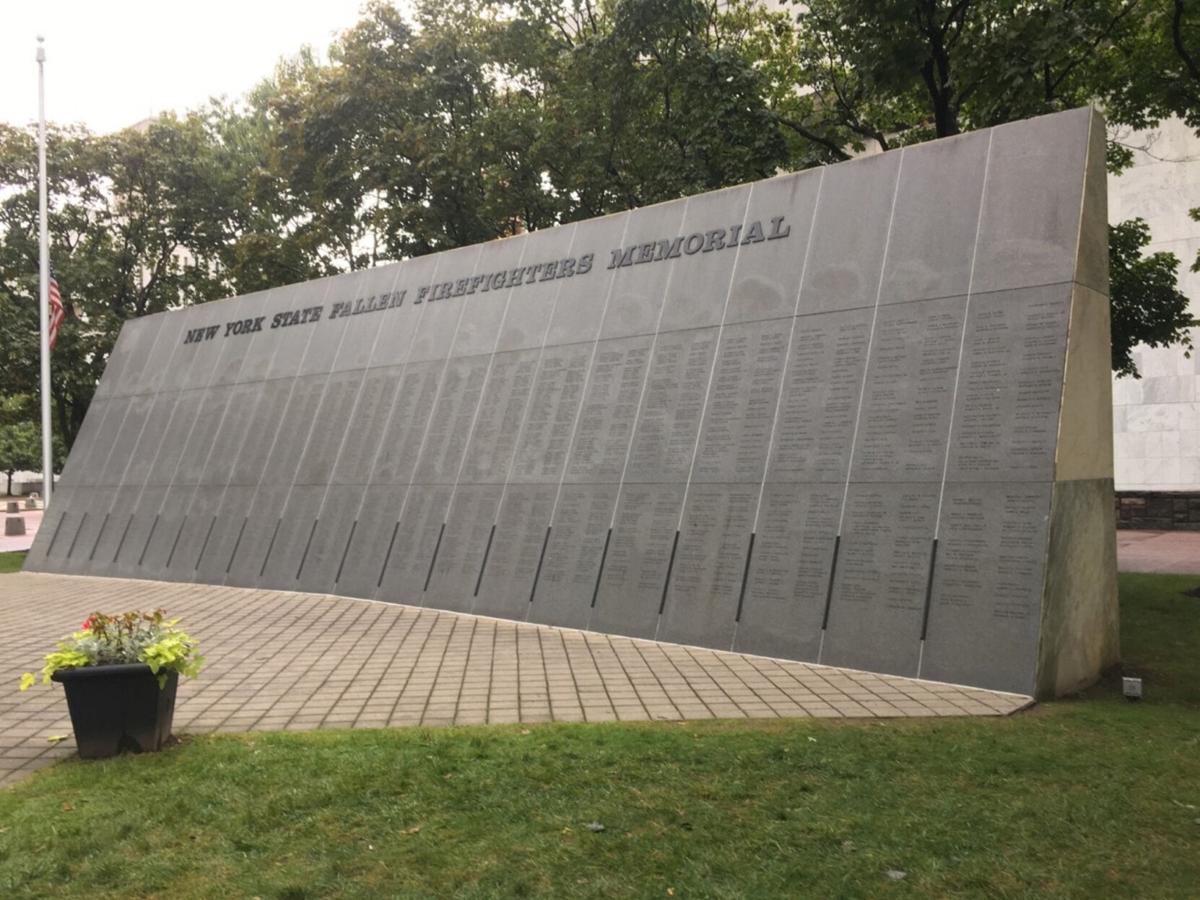 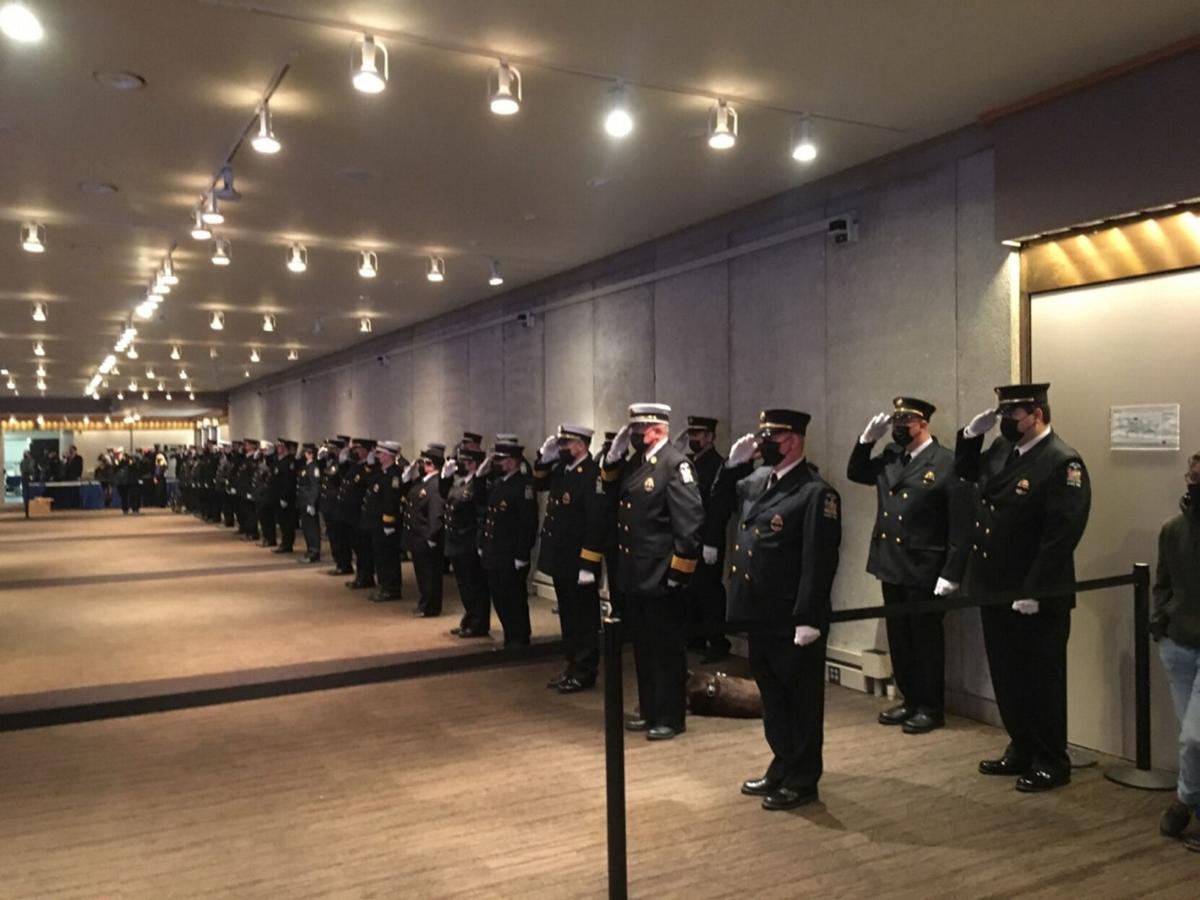 Firefighters stand at attention during a ceremony of fallen firefighters in Albany. Craig Fox/Watertown Daily Times 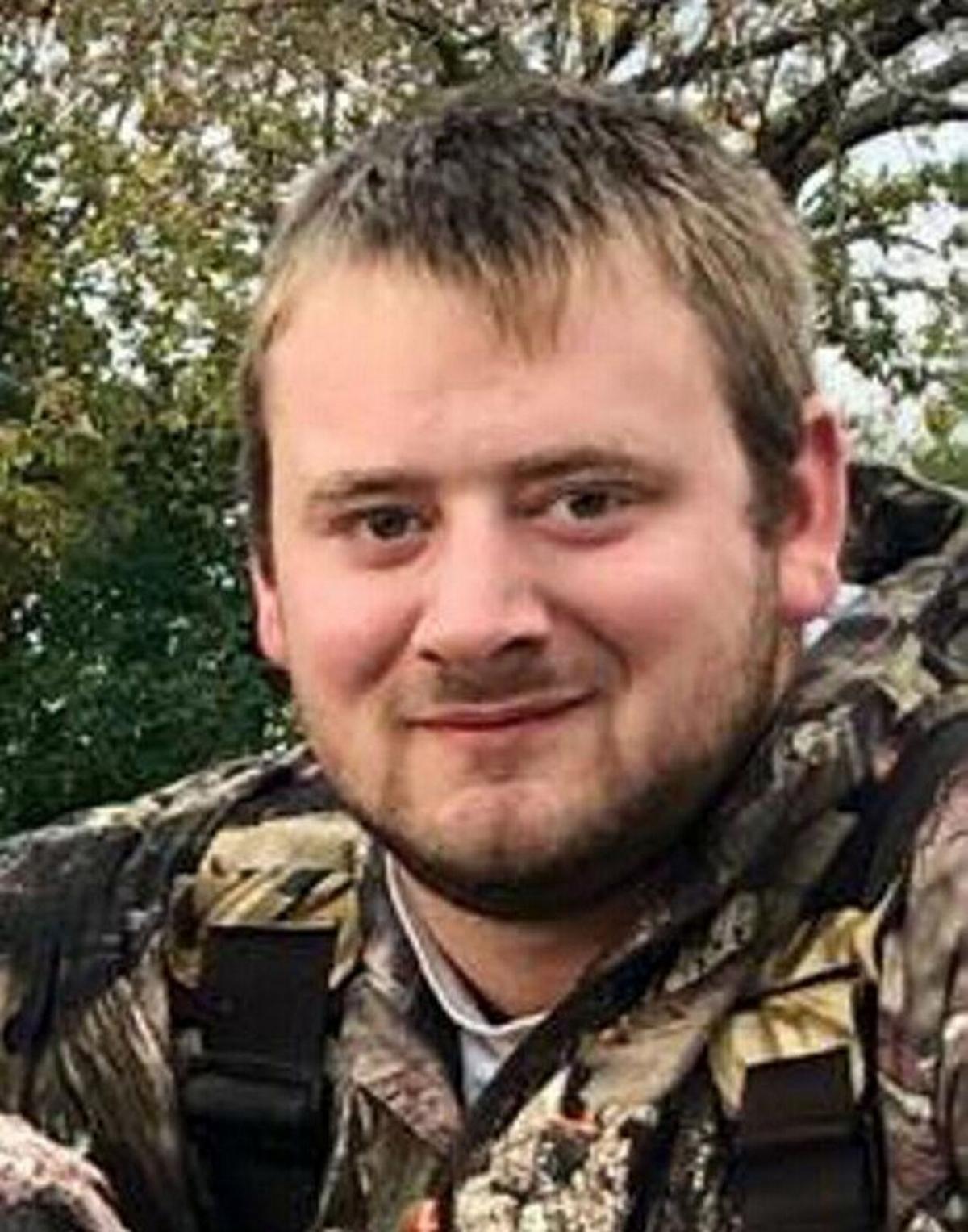 Hundreds of firefighters from across the state attended the Fallen Firefighters Memorial ceremony at the Empire State Plaza in Albany. Craig Fox/Watertown Daily Times

Peyton Morse’s name is etched in the wall at the state Fallen Firefighters Memorial in Albany. Craig Fox/Watertown Daily Times

Firefighters stand at attention during a ceremony of fallen firefighters in Albany. Craig Fox/Watertown Daily Times

WATERTOWN — The parents of city firefighter Peyton L.S. Morse described a memorial for him and 23 fallen firefighters on Tuesday as a beautiful and respectful service in Albany.

It was the first time that any state officials have publicly acknowledged Peyton’s death after he had a medical emergency while training on March 3 at the state Academy of Fire Science in Montour Falls.

After the 90-minute ceremony at the Empire Plaza in Albany, his mother said she appreciated that the state honored her son for his service as a firefighter. But she’s still requesting to meet with Gov. Kathleen C. Hochul — who spoke about her and the state’s love, respect and appreciation for the fallen firefighters and their families — as “a mother to mother.”

“We have an open invitation to meet with her,” Mrs. Morse said.

The 21-year-old firefighter’s parents believe their son’s death could have been prevented, accusing instructors of creating a culture of hazing rather than emphasizing teaching about fire fighting.

As part of Tuesday’s ceremony, Peyton’s name was placed on the state’s Fallen Firefighters Memorial outside of the Empire State Plaza. It was the 24th ceremony for fallen firefighters since the wall was erected in 1997.

It was the first time that about 40 family members, friends and Watertown Fire Department firefighters got to see Peyton’s name since it was etched on the wall.

After the ceremony, Watertown firefighter Eric Moore climbed a ladder and traced Peyton’s name on the wall onto several white pieces of paper and gave them to some of his family members.

Outside of the convention center, city firefighters shook Mr. Morse’s hand and offered condolences to the family. They circled Mrs. Morse, who thanked them for their support and urged them to “stick together.”

Chief Timerman, who knew the young firefighter all of his life, said he’s waiting for another time, when he’s with his boys, to go over to the memorial wall, view Peyton’s name and get an etching.

“I’ll come back when it’s a little quieter,” he said.

The ceremony was “a nice way to honor Peyton, but it does not fill the void, the loss,” he said.

On the wall, Peyton joins two other firefighters the chief knew, Watertown Battalion Chief David Lachenauer, who died in 2018 of cancer associated with his service at the pile at the World Trade Center, and T.J. Lynde, who he got to know in paramedic school and died in a basement fire.

City Firefighter Chris St. Joseph said it was important that he and the other 18 Watertown firefighters attended the ceremony to honor Peyton, respect his family and stand for each of their brothers in the department.

“It’s rare to lose a firefighter,” he said.

Chief Timerman, firefighter St. Joseph, and captains Rich Little and Ron Wareham were together while Peyton was in a Sayre, Pa., hospital for nine days until he died on March 12.

But some of the city firefighters were only getting to know Peyton before his death or had never met him, Chief Timerman said.

During the ceremony, Gov. Hochul told the parents of the fallen firefighters that not all children answer the call for service to their communities. But their’s did, she said.

As they did for the other 23 families, state Office of Fire Prevention and Control, which runs the state fire academy, presented the Morses with a U.S. flag in a wooden triangular box.

Deputy Fire Administrator William R. Davis simply said the flag was presented to the family “on the behalf of the state of New York.” He didn’t say that he was sorry for what happened.

“It was a beautiful ceremony, but it doesn’t answer the questions and we still don’t have any transparency,” Mr. Morse said.

State police is investigating, as well as the state Public Employee Safety and Health Bureau, or PESH, and the National Institute for Occupational Safety and Health, or NIOSH. Peyton’s parents have questioned the progress of the investigation by PESH.

Peyton’s medical emergency happened while he was using a Self Contained Breathing Apparatus — or SCBA — during training. It’s been determined that the breathing apparatus was in proper working order. His parents have insisted that he was in good health, and they don’t understand why instructors didn’t come to his aid when he started to have trouble breathing.

They stressed that they want to make sure another recruit doesn’t go through what Peyton did.