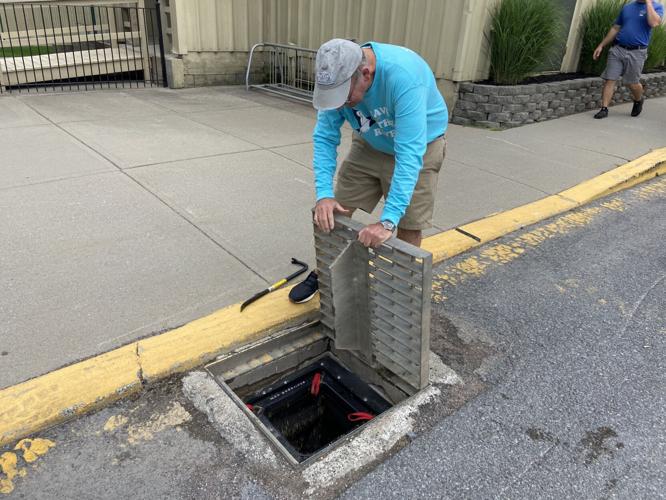 John M. Peach, executive director of Save the River, opens a sewer grate outside the Antique Boat Museum in Clayton to inspect a newly installed LittaTrap. Alex Gault/Watertown Daily Times 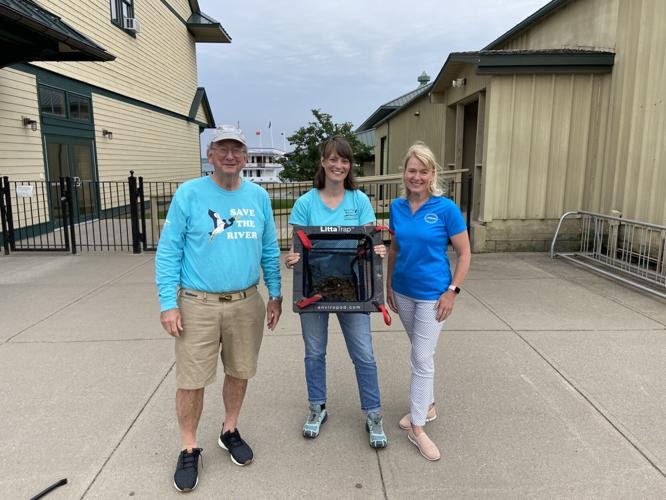 From left, John M. Peach, Lauren K. Eggleston and Rebecca L. Hopfinger pose with a LittaTrap net, which catches garbage and debris that fall into sewer grates before it can pollute the river. Alex Gault/Watertown Daily Times

John M. Peach, executive director of Save the River, opens a sewer grate outside the Antique Boat Museum in Clayton to inspect a newly installed LittaTrap. Alex Gault/Watertown Daily Times

From left, John M. Peach, Lauren K. Eggleston and Rebecca L. Hopfinger pose with a LittaTrap net, which catches garbage and debris that fall into sewer grates before it can pollute the river. Alex Gault/Watertown Daily Times

CLAYTON — There’s some new equipment underfoot outside the Antique Boat Museum in the village, catching garbage before it enters the St. Lawrence River.

Underneath two sewer grates outside the museum are LittaTraps, a new kind of ecological protective technology. They catch any garbage washed into the grates, to be removed by volunteers on a regular schedule. That litter normally would have entered the river, choking wildlife and dirtying the water.

“We’re very excited about them,” said John M. Peach, executive director of Save the River, the organization that installed the devices.

Rebecca L. Hopfinger, executive director of the Antique Boat Museum, said the museum is happy to partner with Save the River on this project, and plans to install a sign explaining the traps prominently nearby.

“The museum’s main mission is recreational boating, so anything we can do to support clean waters and a pleasant experience, we’ll do,” she said. “As an educational facility, we definitely want to show how we can protect and keep these waters clean, which is why we’re putting up the signs.”

The traps consist of two pieces — a netted basket in the center to catch any large items that flow into the drain, and a bracket, bolted to the sides of the drain, to hold the basket in place.

Lauren K. Eggleston, program manager for Save the River, said volunteers who work with Save the River will be coming out regularly to check on the traps and empty the garbage once it builds up. The two LittaTraps outside the Antique Boat Museum are pilot tests, she said, so teams will track them closely to see how quickly they fill up.

“This pilot program is going to answer a lot of questions about these for us,” she said.

The traps, in one week, caught mostly leaves, as well as cigarette butts, pieces of plastic and wrappers. While the leaves don’t necessarily need to be kept out of the river, Ms. Eggleston said they don’t pose much of a problem for the LittaTraps.

“We’ll just have to empty them a bit more when they fill with leaves,” she said.

A major question that remains unanswered is how to easily access the traps. The grates outside the boat museum, which are supposedly of light-weight design, Mr. Peach said, are very heavy and require a crowbar to open.

“We’ll have to make sure people are able to lift those up to get to them, especially if we get to the places with the heavier grates,” Mr. Peach said.

Initially, Save the River wanted to install four LittaTraps, putting two more on Riverside Drive near their main office. Downtown construction, which has seen the roads and sidewalks of Clayton’s downtown historic district renewed, has prevented those traps’ installation for now.

Even communities farther south of the St. Lawrence River and Lake Ontario could benefit from LittaTraps, Mr. Peach said. Cities and towns like Watertown, Carthage, Pulaski and Oswego, on rivers that feed into the lake, could see significant environmental benefits from the installation of LittaTraps, he said.

In Clayton, Mr. Peach said he was enormously grateful for the help of the village of Clayton and the Antique Boat Museum.

Save the River paid $500 per trap to purchase the devices from their manufacturers, and the village had its Department of Public Works install the devices at no cost, during routine maintenance.

“The village was super cooperative, we’re so grateful for their collaboration on this project,” Ms. Eggleston said.

Ultimately, Save the River wants to install traps anywhere runoff water drains directly to the river, wherever there’s a potential for trash to be swept into the water.

“There’s a huge potential,” Mr. Peach said. “Any time you keep trash out of the river, it’s a win.”