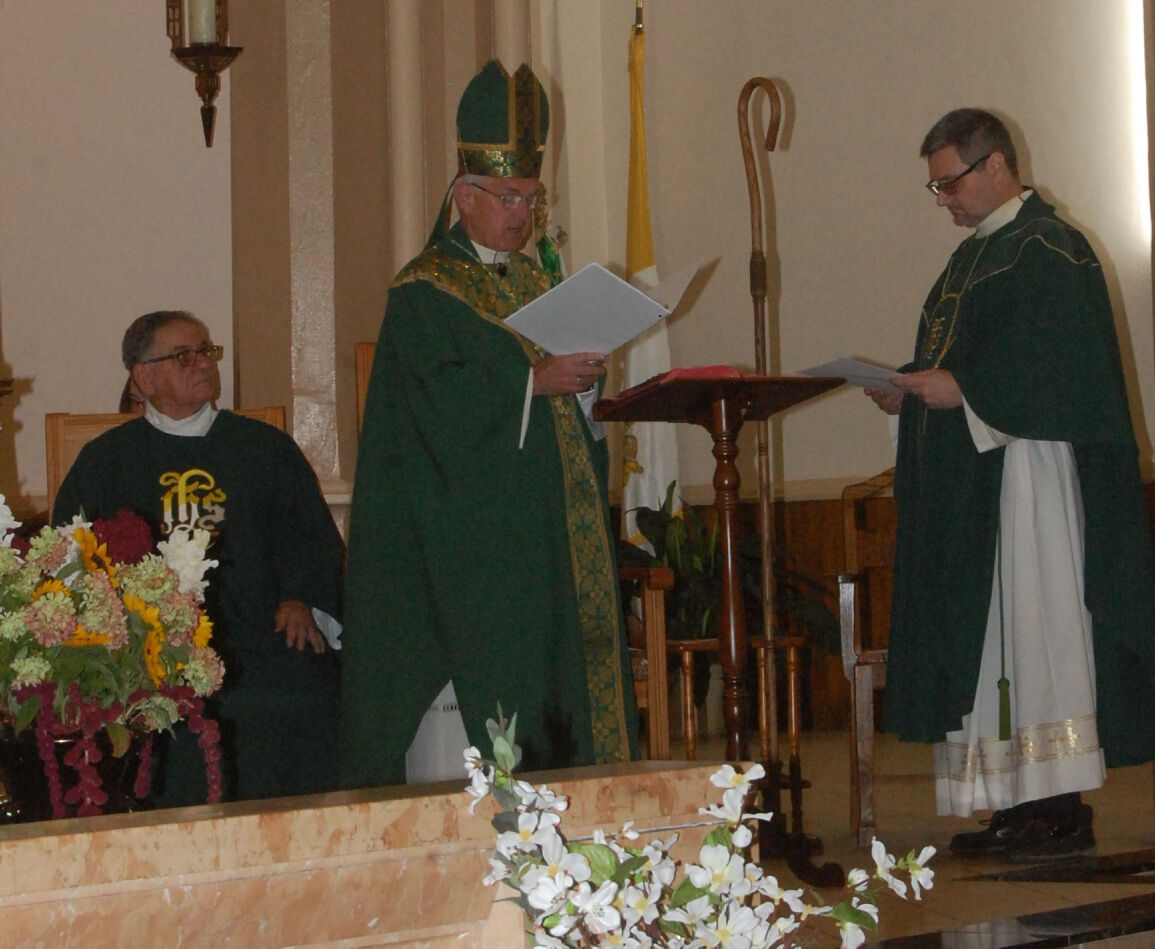 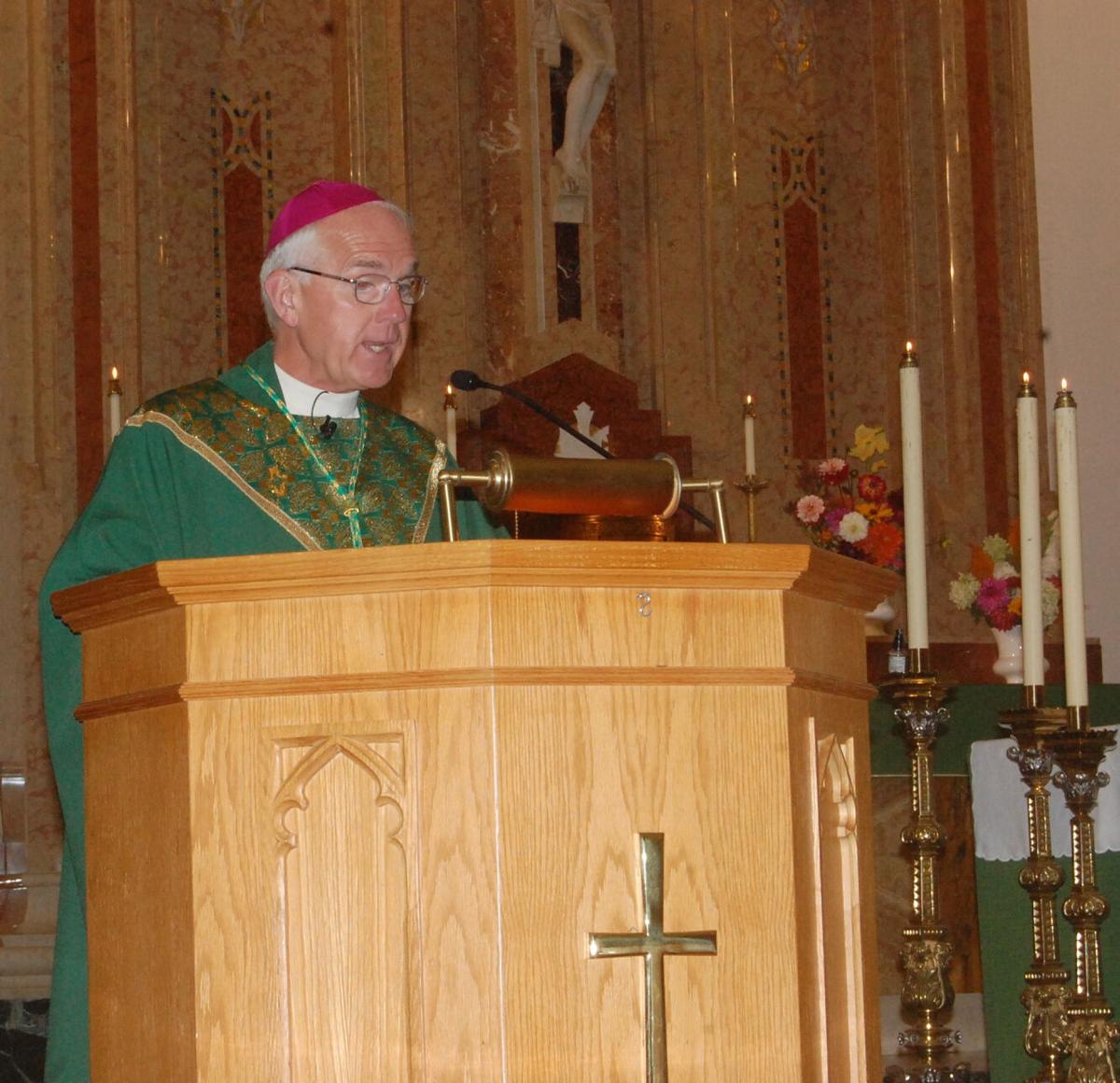 CARTHAGE — Parishioners of St. James Catholic Church had double the reason to celebrate Sunday as another segment of its 200th anniversary was observed and the Rev. Todd E. Thibault was installed as pastor.

Members of the Carthage Knights of Columbus Father John Cosmic Council 291 took part in the procession entering the church for Mass and exiting.

In his homily, the bishop quoted Theodore Roosevelt: “The credit belongs to the man who is actually in the arena, whose face is marred by dust and sweat and blood; who strives valiantly; who errs, who comes short again and again, because there is no effort without error and shortcoming; but who does actually strive to do the deeds; who knows great enthusiasms, the great devotions; who spends himself in a worthy cause; who at the best knows in the end the triumph of high achievement, and who at the worst, if he fails, at least fails while daring greatly, so that his place shall never be with those cold and timid souls who neither know victory nor defeat.”

“It is a rich heritage you have inherited,” he told the congregation.

He called for a renewal of faith, and upon the church’s 200th anniversary, urged this “family of faith to live and continue to live the Catholic faith.”

During his installation, Father Thibault pledged to serve the St. Mary’s and St. James parishes and the bishop urged him to work with the church councils for the procreation of faith.

Father Thibault, former pastor of St. Bernard’s and St. Edmund’s parishes in St. Lawrence County, replaces the Rev. Donald A. Robinson, who was transferred to the Brownville, Dexter and Sackets Harbor parishes.

Father Thibault was pastor in Ellenburg Center and Lyon Mountain since 2019, and he served as administrator of the community starting in 2017. Prior to those assignments, he served as parochial vicar at St. Mary’s in Canton. Father Thibault was ordained Oct. 8, 2016. In the welcome to Father Thibault in the St. James and St. Mary’s bulletin, it states, the then seminarian, a native of Colchester. Vt., was assigned to St. James under the mentorship of the late Father George Maroun in order to become familiar with the Diocese of Ogdensburg.

As one of the oldest churches in the state, St. James opted to have a yearlong commemoration of its 200 years instead of having one big celebration.

The parish has held monthly events to commemorate the 200th anniversary with a celebration of marriage in February, a Lenten Parish Mission “Dare to be Holy” in March and celebrating children of St. James in April with special events at Augustinian Academy. In May, the parish had a special Mass followed by a reception to honor the Sisters of St. Joseph and the Augustinian friars. Both groups served the parish and Augustinian Academy for years. Trees were planted on the church’s front lawn in honor of the two groups.

In July, a collection of recipes from parishioners — “Taste of St. James Cookbook” — was released. Copies are still available through the parish office. A parish picnic was held in August as part of the 200th anniversary.

In January, there was to be a New Year’s Eve dinner, but due to the ongoing COVID-19 pandemic, that event was postponed and is planned for Dec. 31. The St. James Fair, which was to be the June celebration for the 200th anniversary, was also canceled.

According to Joseph Margrey, anniversary committee chair, the idea for the 200th Anniversary celebration came from the former church pastor, Rev. Robinson.

St. James Catholic Church was the third parish founded in the state in 1785. James D. LeRay de Chaumont donated land on July 7, 1818, to erect a church with the title transferred to trustees in 1821. The Society of St. James Church Carthage was incorporated on Sept. 25, 1825, into the Diocese of Albany.

In addition to the monthly celebrations, St. James parishioner Michael Sligar, updated a booklet about the art which abounds in the church — “Symbols, Painting, Statues and Signs within Saint James Catholic Church.” Copies of the booklet are available through the church rectory.

The parish is also compiling a parish history from 1977 forward and is seeking information or pictures from parish organizations. Items may be dropped off at the parish rectory, 327 West St. or emailed to Todd Norrgard at tnorrgard@hotmail.com with the subject line, “info for parish history.”

Upcoming events to conclude the celebration:

n St. James Festival of Trees: To be held in December in Augustinian Academy gymnasium

More information on upcoming events will be available as the dates approach.