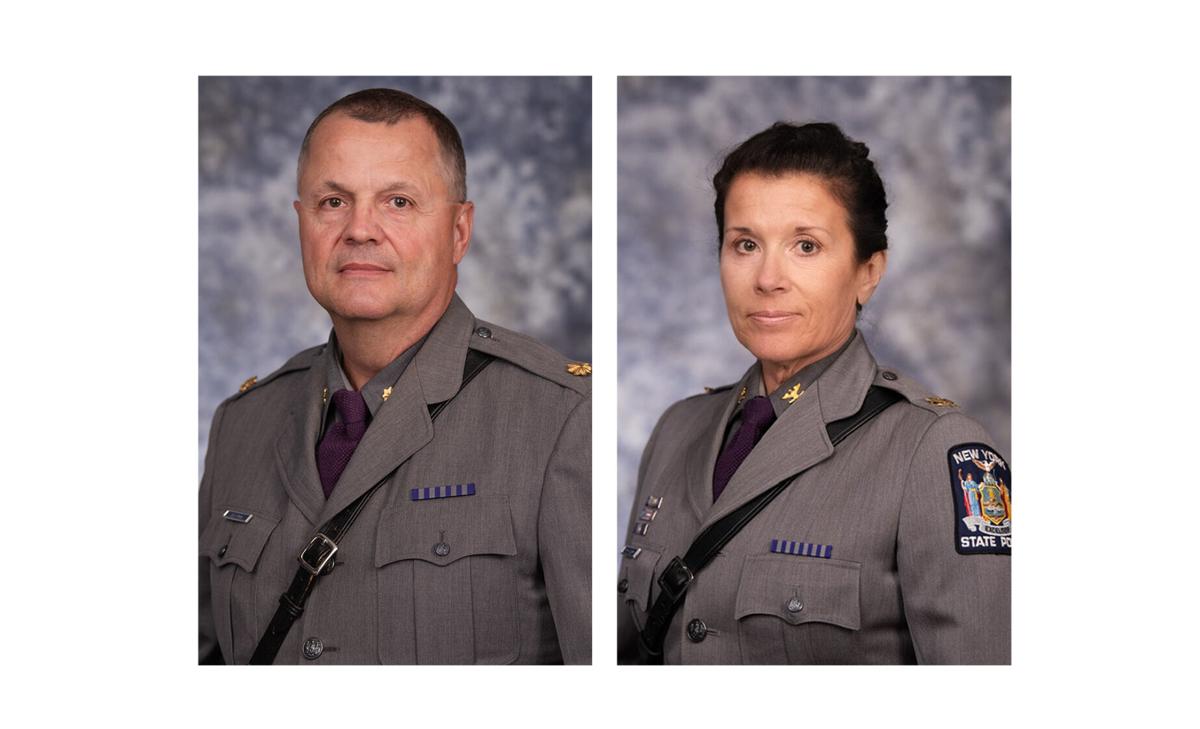 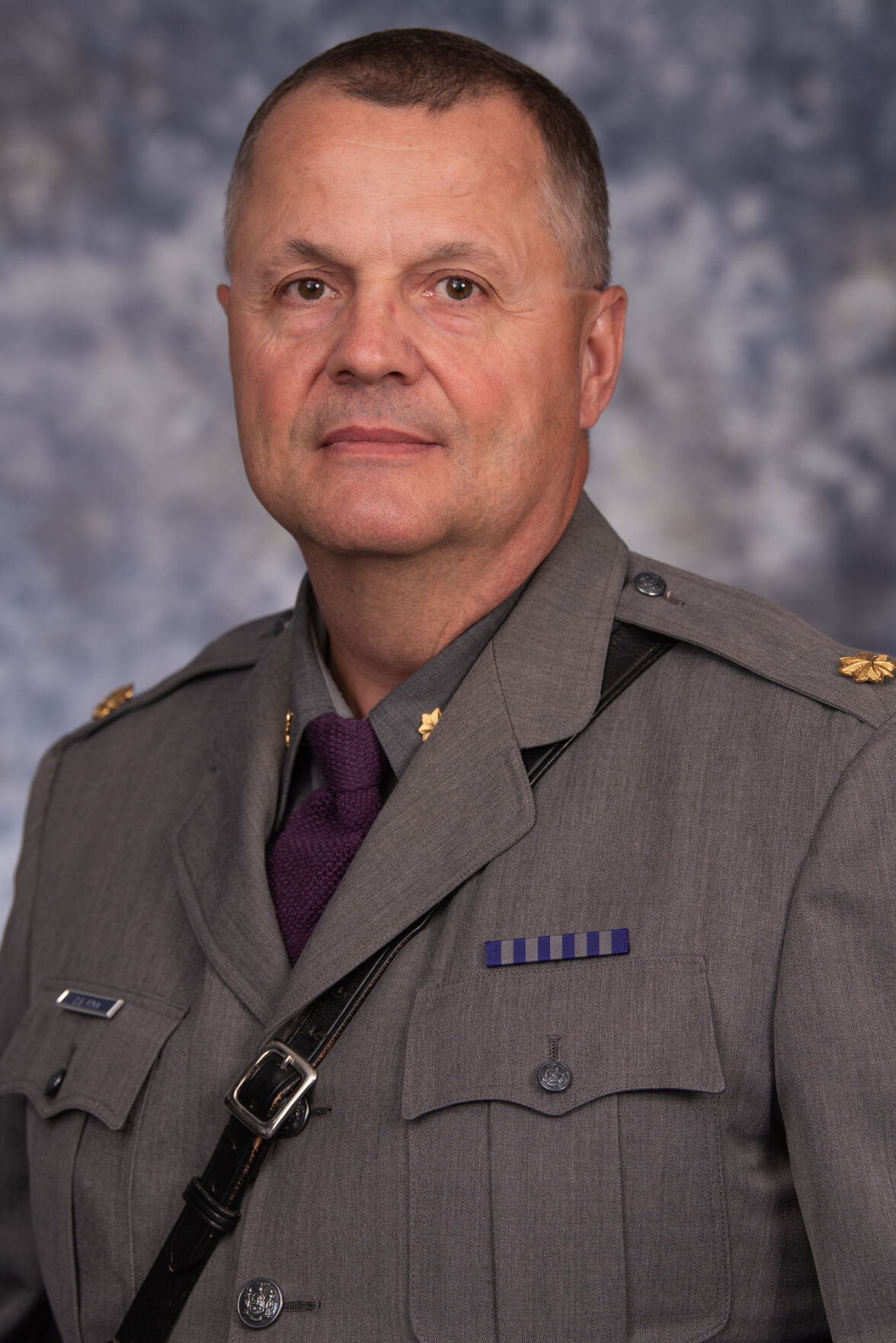 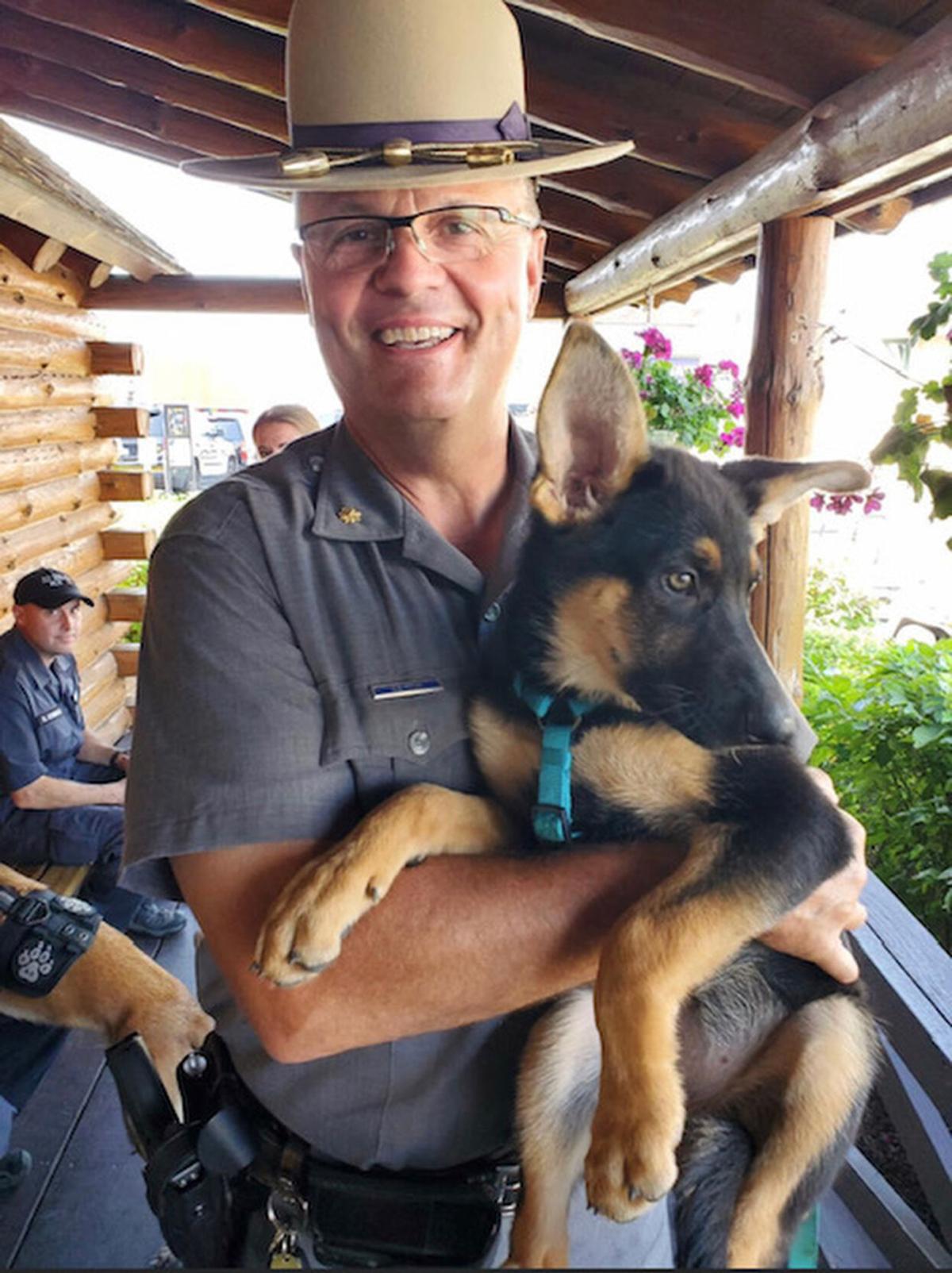 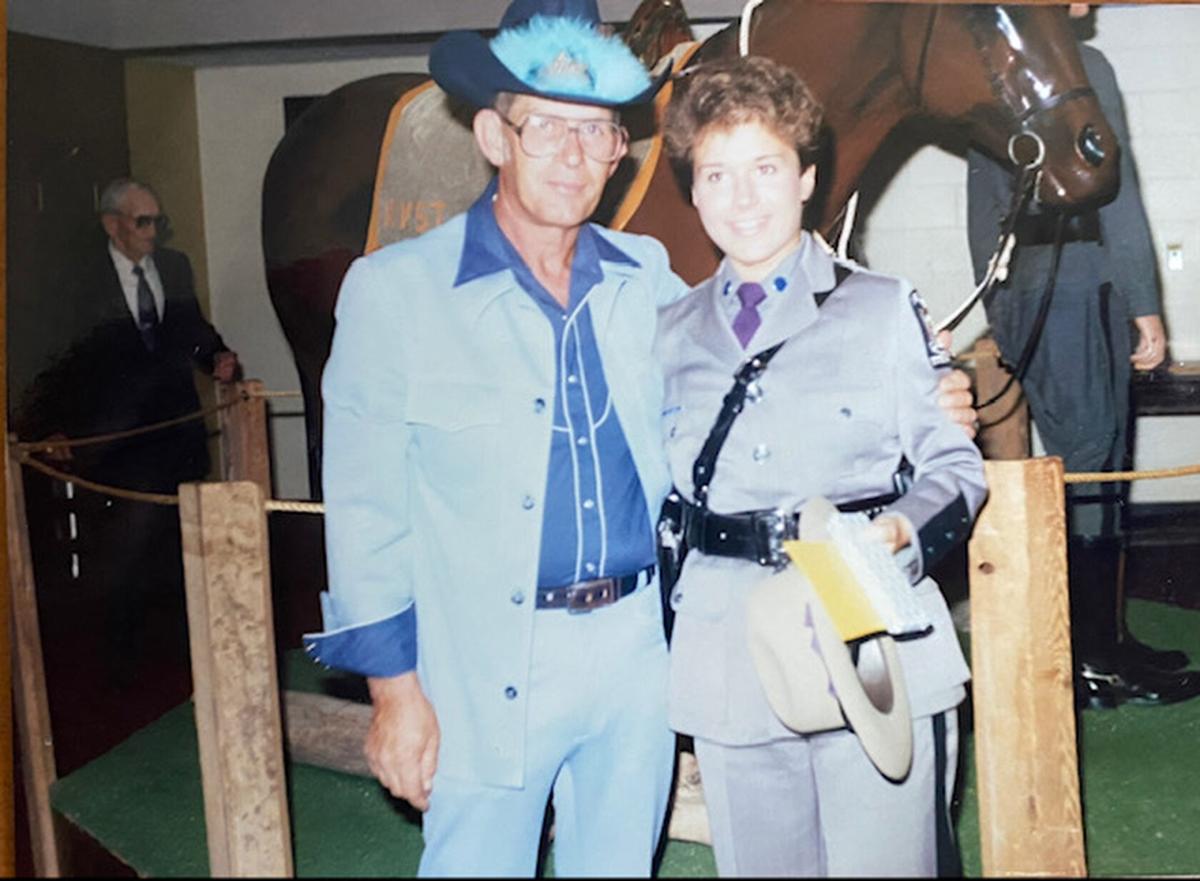 Mary A. Clark poses for a photo with her dad, Robert Ersing, the man she calls her hero, at her academy graduation in 1986. Provided photo 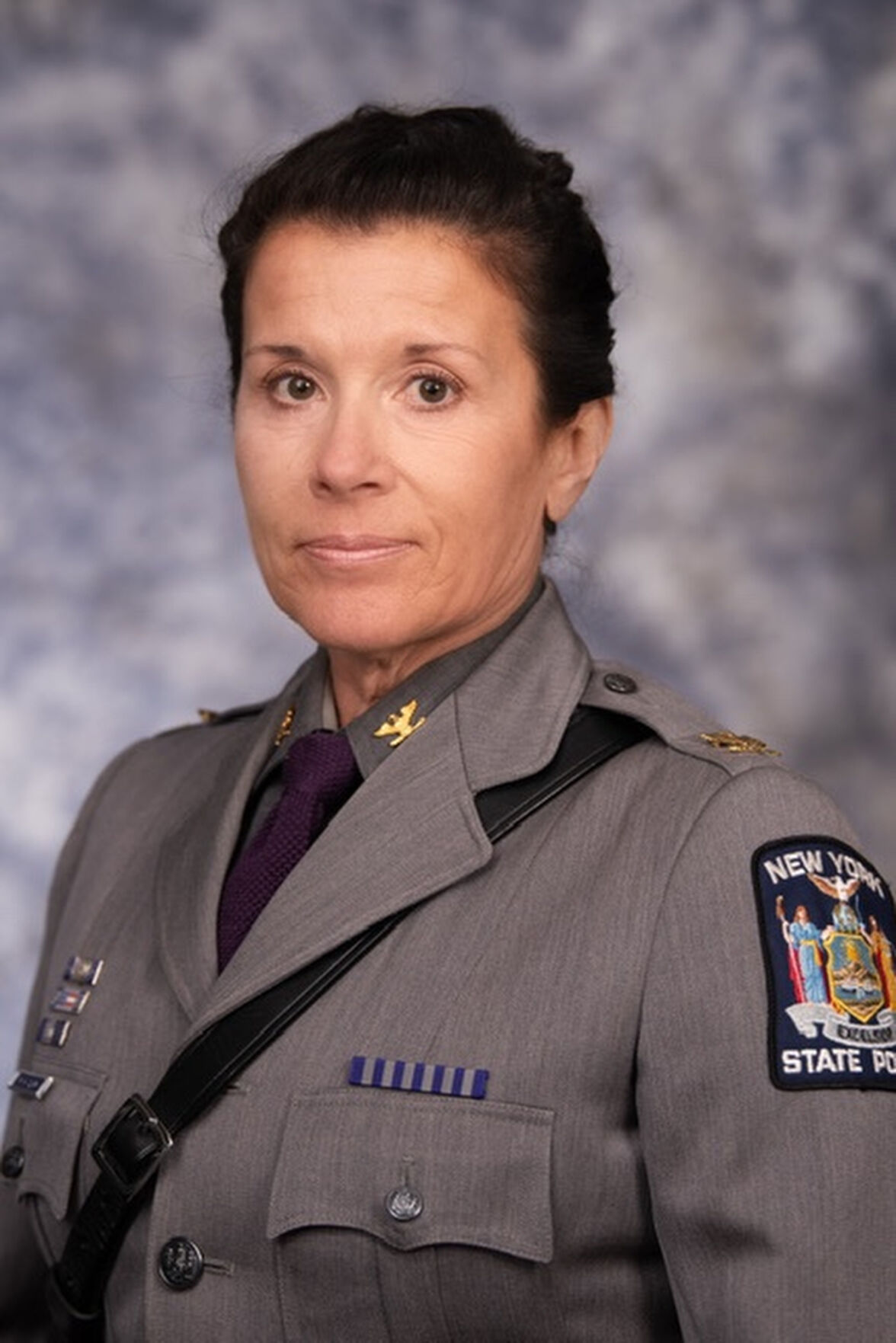 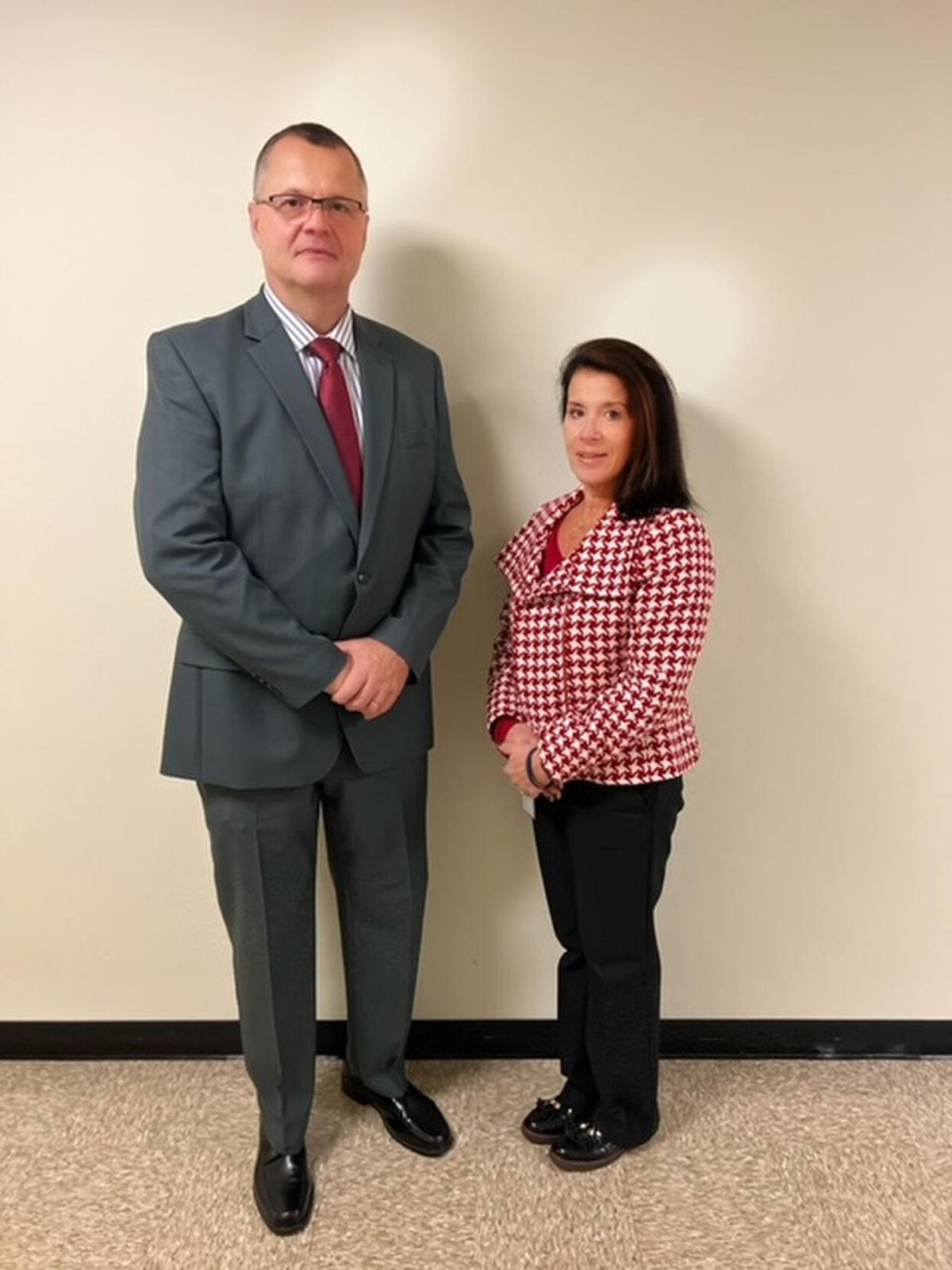 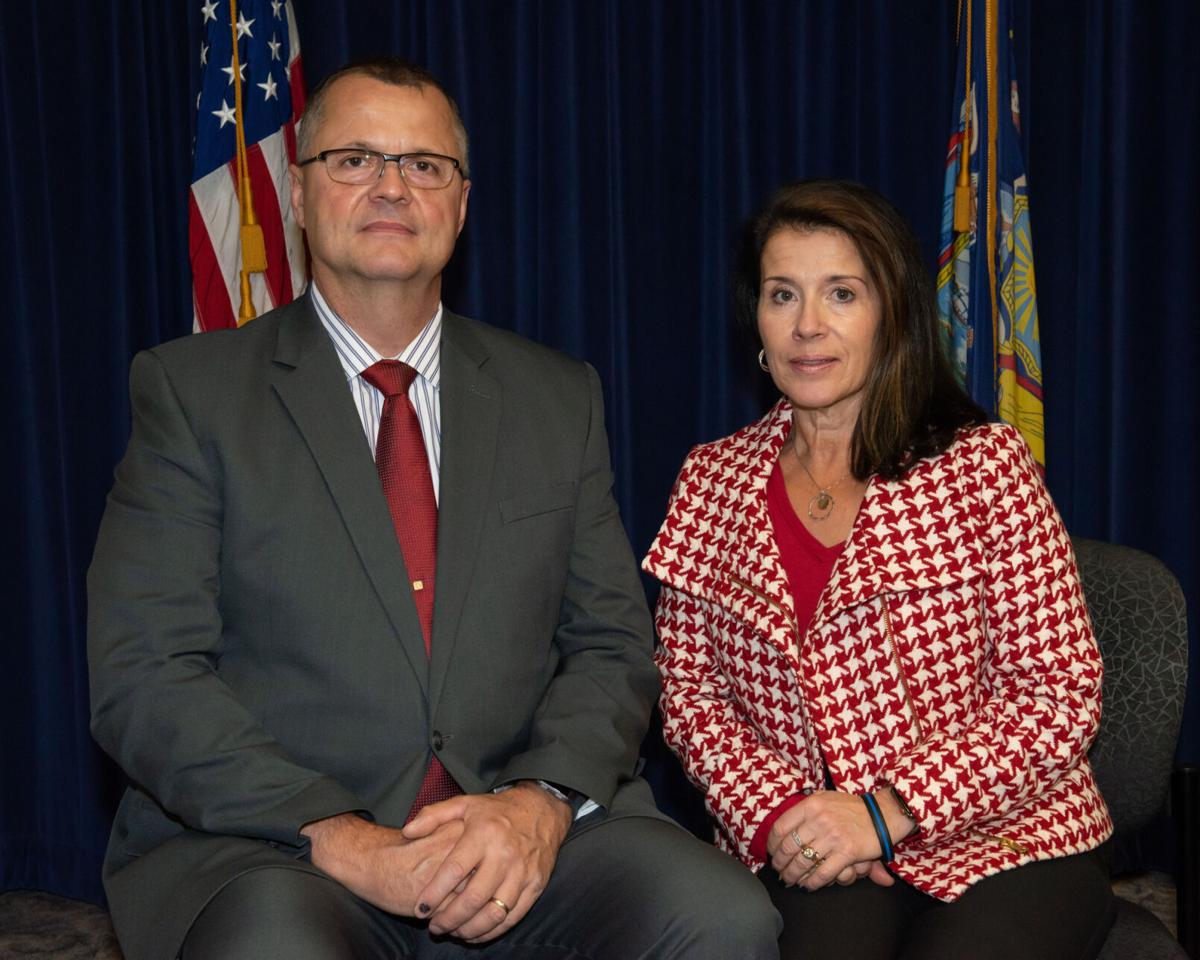 Mary A. Clark poses for a photo with her dad, Robert Ersing, the man she calls her hero, at her academy graduation in 1986. Provided photo

WATERTOWN — Mary A. Clark trained Darrin S. Pitkin around three decades ago when he just got out of the academy, and now, after recent promotions, they’re both among the top leaders of the New York State Police.

Their daughters played softball together for crying out loud.

The two troopers have been drawn toward the Jefferson County post for their entire careers. They spent years working in Watertown, leaving for other stints thinking they’d return, and they would. It’s been their home for decades, and now the colleagues live just a few miles away, leading state law enforcement.

Mrs. Clark, of Chaumont, recently became a full colonel, after she was made deputy superintendent. The job makes her the highest-ranking woman in the New York State Police. Mr. Pitkin, who grew up in Dexter and still lives there, recently became a lieutenant colonel after he was made assistant deputy superintendent. The promotions place them in the top 15 leaders of the state police.

“I’ve worked with Mary for most of my career,” Mr. Pitkin said. “I watched Mary rise through the ranks and got many opportunities to work with her. She is just a consummate professional. She does an outstanding job and she is very deserving of this promotion.”

Mrs. Clark came on the job in 1986, working as a road trooper out of Watertown and Philadelphia. She studied teaching in college and graduated at the top of her class, but she wasn’t exactly thrilled with the job when she started. She was working a second job at a diner at the time and some trooper friends of hers gave her an application.

“Thirty-five years later, I’m still here,” she said. “I love helping people. Our mission is to protect and serve. I’m a people person and I enjoy going to work every day.”

She grew up in Western New York, but she’s north country through and through. She met her husband shortly after being stationed in Watertown in 1986.

“We got married,” she said, “and now I’m from the north country.”

Mrs. Clark has had at least eight promotions in 35 years with the agency. She went from investigator to lieutenant to captain to staff inspector to lieutenant colonel to full-bird colonel. She’s had longstanding goals of seeking further promotions, and that really kicked into gear when her daughter went to college. Mrs. Clark spent 2015 in a dorm at SUNY Albany getting her master’s degree, while her daughter lived at home as she went to Jefferson Community College.

She was promoted to captain in Troop D after she got her master’s degree, which put her in charge of Zone 1, including Rome, Herkimer, Morrisville and Marcy. In 2017, she became a major. In that rank she was put in charge of the Community Narcotics Enforcement Team for the entire state. That promotion brought her full circle, as she had previously been an investigator with the team in Lowville and Syracuse.

“Anything is possible,” Mrs. Clark said of what she would tell younger recruits. “I’m a firm believer that good things happen to people who work hard and persevere and have integrity. If you make the right decisions and do the best possible job you can, anything is possible in this career. I never thought I would be a colonel in the New York State Police, but it just shows that perseverance and hard work and doing the right thing and supporting the people you work with and helping people within the communities you work in, people notice and that work pays off.”

Not to mention, she is teaching a criminal justice class at SUNY Albany.

“That’s something I’ll pursue more in retirement,” she said. “I feel like I’m just coming into my prime. I’m at that point where I can mentor younger females, younger troopers and hopefully make a difference in the future of the New York State Police.”

Growing up in Dexter, Mr. Pitkin worked odd jobs as a kid before going to college to earn separate bachelor’s degrees in sociology and economics, as well as a master’s degree in public administration. He graduated and was a bank manager for 18 months, but he always knew he would end up being a trooper.

He started his career with state police in 1990 and got promoted early and often. Those didn’t come before he was trained by Mrs. Clark, of course, but he was a road trooper in Alexandria Bay for six years before he was made station commander. He was promoted to lieutenant from sergeant in 2000 and was assigned to the Troop D headquarters in Oneida.

He made the rank of captain in 2004 and did a short stint with the Troop T Thruway, but then he returned home. Mr. Pitkin became the Zone 3 commander of the Watertown troop, which included several towns in Jefferson, Oswego and Lewis counties. After nearly 15 years in Watertown, he became a major and was promoted to commander of the entire Troop B out of Ray Brook, which covers the five northern-most counties in the state.

“I was lucky enough to be selected as a major,” he said. “Those were jobs I always wanted and dreamed of doing and I never looked past that. And then all of a sudden I was brought to Albany and given a promotion, so it was a very pleasant surprise.”

He began his job as assistant deputy superintendent last week, working in the Professional Standards Bureau and overseeing audits at stations across the state.

“It’s a new experience for me,” said Mr. Pitkin, who has known being in the field his entire career. “There’s a lot for me to learn, but I have a lot of good people that I’m surrounded by that will bring me up to speed and assist me in carrying out my new duties.”

“To me, every day is a new experience,” he said. “I’m still learning something new every day, and that makes me want to come back to work day after day.”

And he’s betting heavy on the future of the agency.

“It’s a privilege for me to work with a lot of the new people who are the up-and-coming leaders and get to instill some of my experience on them,” he said. “We have a lot of great people who are coming up in this organization who are going to lead the state police in the next couple of years, and for me to be a part of that is really a great opportunity for myself and an honor to do that.”

In the meantime, Mr. Pitkin and Mrs. Clark are going from training 30 years ago to reporting to the same building in Albany.

“We take this job to serve the public and that’s something that’s ingrained in all of us,” Mr. Pitkin said. “We want to serve the communities and the people in those communities. It’s just something in a person’s blood to want to do public service.”